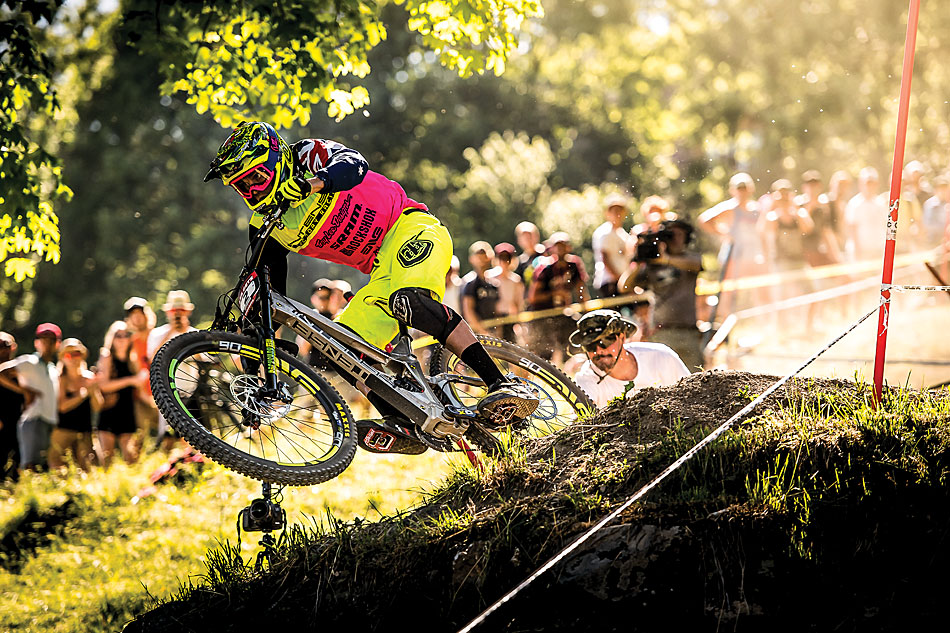 Over the last few years Australia’s Jack Moir has come to be known as one of the top downhill racers in the world. Last June he debuted the new 29-inch-wheeled Intense M29 downhill bike at the Fort William World Cup race in Scotland. Moir placed second in the finals, right between winner Greg Minnaar and bronze medalist Aaron Gwin, the two winningest men in the history of World Cup downhill racing.
That race was Jack Moir’s best World Cup finish to date, and it may well be a sign of how big a threat he’s likely to be in the years ahead. Why do people call Moir “Shark Attack Jack’’? That’s easy. He was attacked by a shark when he was a kid. Fortunately, he lived to tell about it. See the accompanying sidebar to read about it. 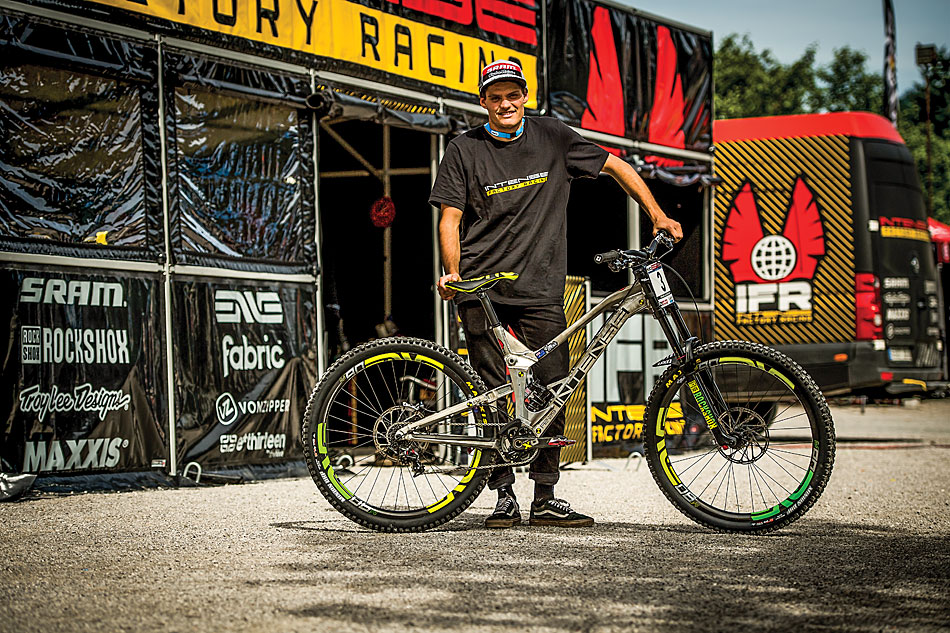 Note: This page shows the aluminum prototype M29, upon which Jack’s carbon fiber model is based. The weight and parts in this story are the ones of the newest carbon version. Photo by Nathan Hughes

Jack: Dad is an engineer. Mum owns a jewelry shop.

Jack: I used to ride motorbikes a lot when I was younger but never competed. Before bike competitions, I competed in surfing and skate comps.

Jack: I got my first mountain bike for Christmas in 2007. It was a Kona Stinky.

Jack: I started doing downhill state races the year I got my bike, in 2007, then gradually started doing national rounds, and that led to World Cups. 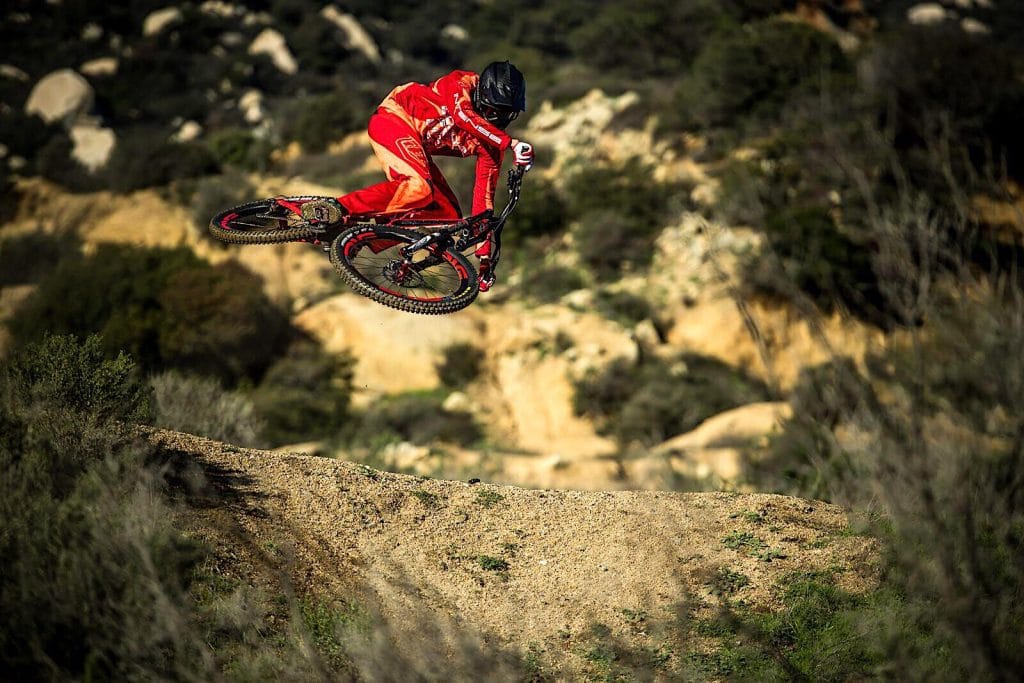 Jack: No. I never won any titles as an amateur—a few podiums, but no wins. It was tough growing up with Troy Brosnan and Connor Fearon [laughs].

Jack: My best results as a pro would have to be my second place at the Fort William World Cup, fourth at the Cairns World Championships and seventh overall in the World Cup series. 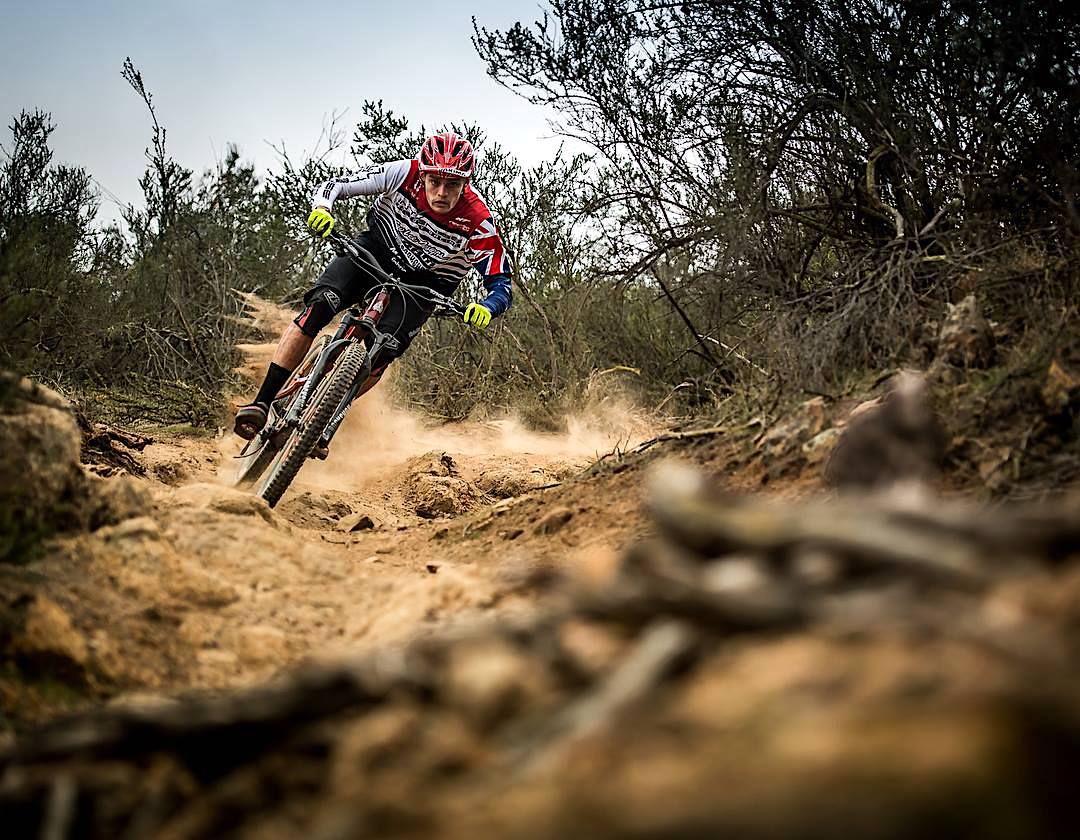 Jack: No. I finished high school, though. Then, after that, I started traveling over to Europe to race.

Jack: I got a couple of general academic awards throughout high school—nothing special, though [laughs].

MBA: Can you tell us something interesting or unusual about you or your family.

Jack: I can’t really think of anything that unusual to be honest. Maybe I’m not as weird as you think I am [laughs]. 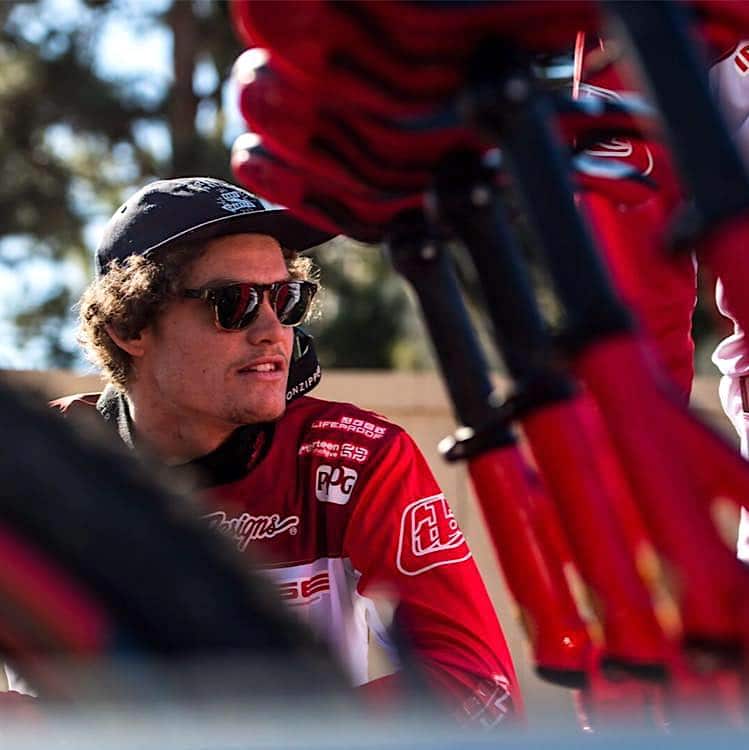 Intense started working on designing Jack Moir’s 29-inch downhill bike in the fall of 2016, according to his mechanic, Chappy Fiene. Jack had been racing the company’s 29-inch-wheeled Carbine enduro bikes whenever he could, and he had been wanting a downhill bike with the bigger wheels for some time.

Standing 6-feet-4, Moir was eager to have Intense increase the wheel size of his bike, and Jeff Steber—the founder, CEO and head bike designer at Intense—was more than happy to build him what he wanted. Last spring Moir got to try an aluminum prototype of Intense’s new M29 downhill bike. He got the bike shortly before the Fort William race, the second downhill World Cup of the year.

“I only rode it for one week before that [race],” Jack recalls. “I knew it was a good fit for me when I started riding it. I was pretty keen to start racing it. The size is a lot better for a taller rider. The 29-inch wheels seem to smooth everything out a little. I feel as if I can flow down a trail and carry speed a lot easier when rolling on bigger wheels. My favorite thing about the new M29 is obviously how it rides, but I’m also stoked on how it looks. I was so pumped on the alloy prototype when I first laid eyes on it, and somehow Jeff has made the carbon version look even better than that. I’m loving the 29-inch wheels. I have been riding them on the Carbine for a couple years now, so [I’m] stoked that there is finally a downhill bike with them. They definitely suit a taller person, making the bike a lot less cramped and more comfortable.” 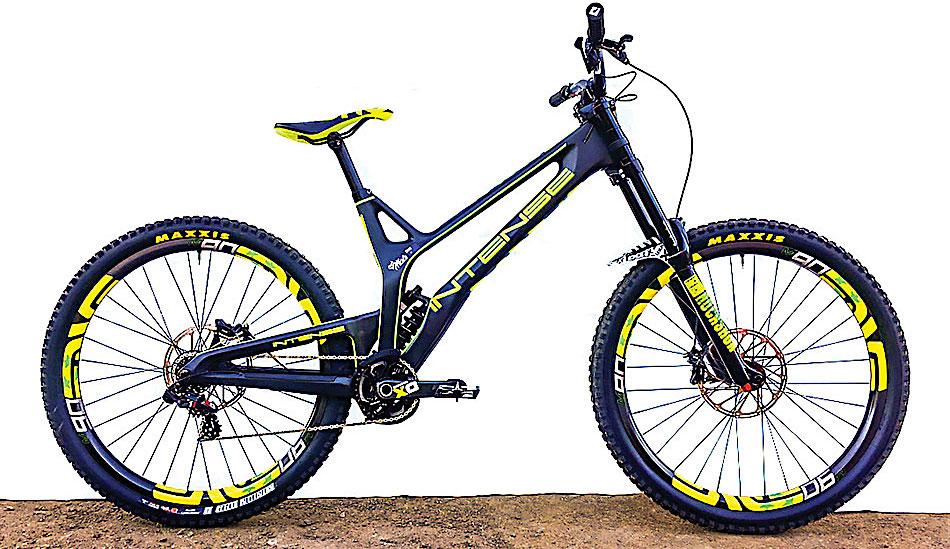 Estimated value: “There are two in the world currently,” Chappy told us, “but realistic pricing would be hard to say with so many prototype parts.”

“The bike is an all-new, 29-inch-wheel-specific, flagship downhill bike,” Moir’s mechanic, Chappy Fiene, told us. “Jack has been on the carbon sample frames and has been involved in the R&D process. World Cup Downhill
is the F-1 of mountain bikes, and it’s so awesome to be able to work with prototypes in this environment, to really develop and evolve what our performance expectations are.”

“This has been a great platform for us to develop our 29-inch-wheeled downhill bike,” Chappy told us. “RockShox has been pivotal in getting the M29 in the dirt so quick.”

Says Chappy: “[They’re] very consistent in so many conditions, and the new WT [wide tread] works perfectly with our Enve wheel setup.”

4. Tubeless tire sealant: The team uses Stan’s NoTubes sealant in the U.S. and other brands in other countries.

“Extremely stiff and as accurate as they come,” says Fiene. “Awesome to be able to tune the wheels per the track conditions and have them able to hold the lower tension settings we have been running on the big wheels. We never have the worry, ‘Are they strong enough?’ They will take any flat-landing maneuvers these guys can put them through.”

“Bomb-proof as well,” says Chappy, “and super-quick and precise engagement.” 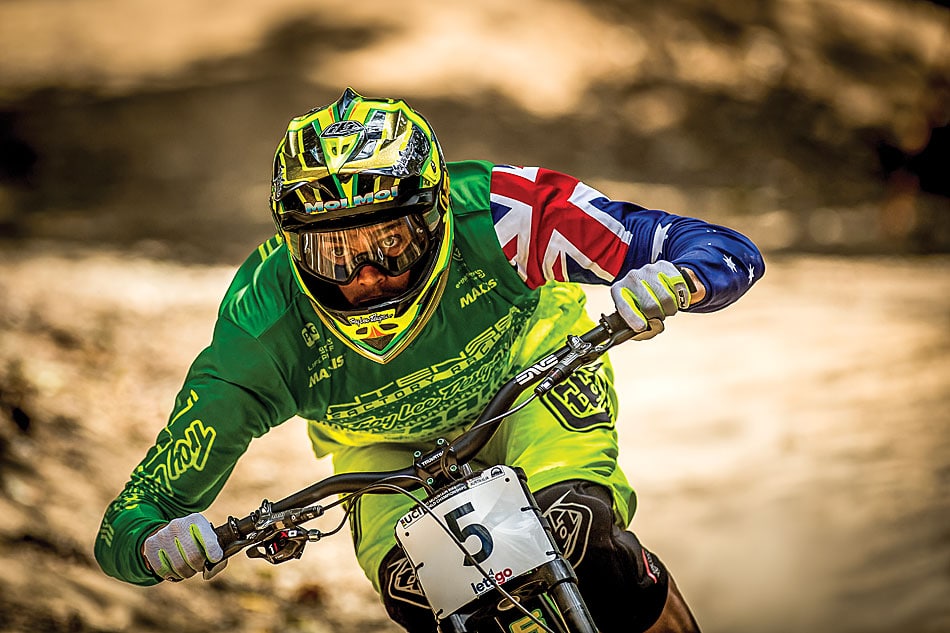 “With the bigger wheels throwing more leverage at the brakes,” Chappy tells us, “the 220-millimeter rotors matched with the Code brakes are so good.”

“Awesome feel in pretty much any condition,” says Chappy.

“The entire SRAM X0 seven-speed downhill drivetrain is so dialed in,” says Chappy. “It’s precise, and we have next to zero issues with anything, which, with what these guys are plowing through, is saying something.”

“We change it every other race weekend,” says Fiene.

“Super clean, tough and comfy enough to throw on any bike in the arsenal,” says Chappy. 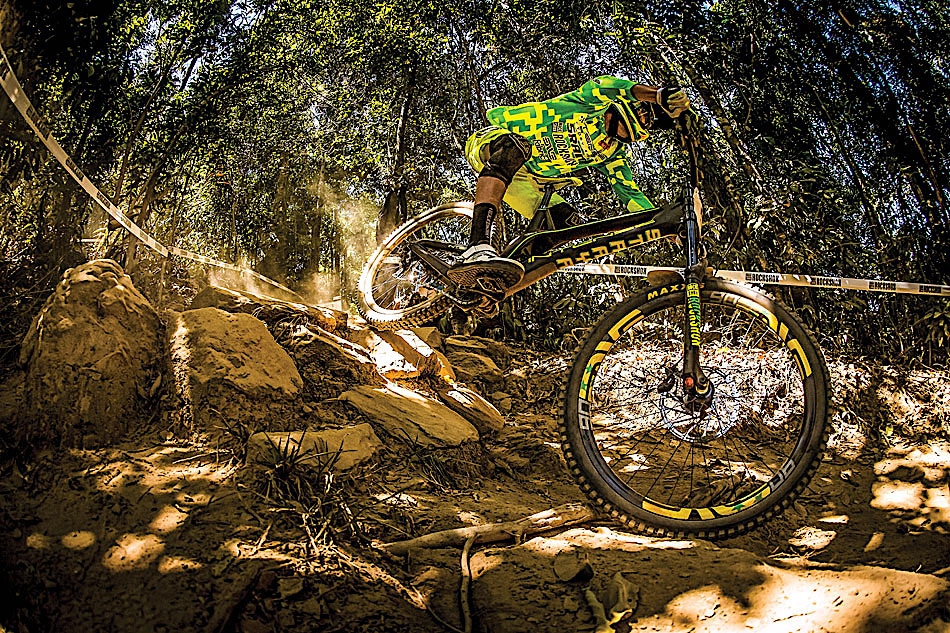 “We use Ti-Springs.com Ti bolt kits throughout, as well as their Ti springs.” 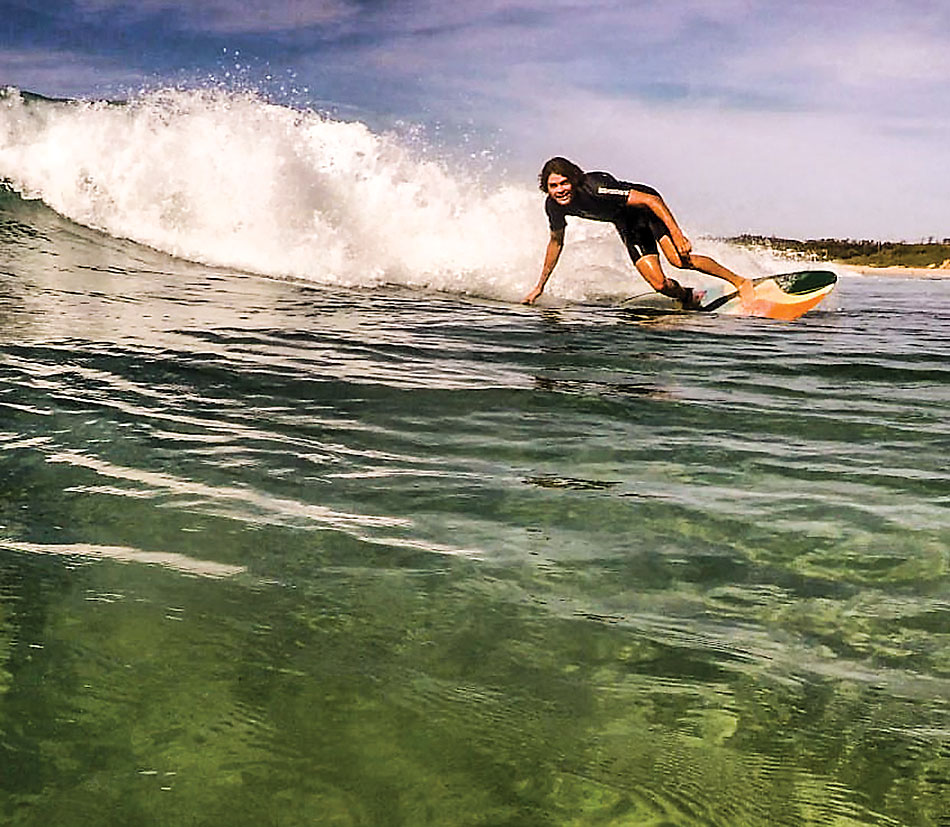 Jack Moir was 13 when he was attacked by a shark while surfing in June of 2007 at Shelly Beach, a bit north of Sydney, Australia. Jack had just finished riding a wave and was heading back out to the lineup when the shark grabbed him. “Basically, it just bit my leg when I was standing up in waist- deep water,” Jack told MBA. “When I
got bit, I was just standing and jumping over the waves, waiting to paddle back out. I shook my leg to rip it out of its mouth, and it then bit my foot. Luckily, the water was dredging back out and went down to about shin-deep. The shark then started thrashing to get back out to deeper water. I just caught a wave in on my belly.” The shark was believed to have been a bull shark, according to the local news report of Jack’s attack in the Daily Telegraph. Such sharks typically grow to around 7 to 8 feet long, weigh around 300 pounds and are known to be aggressive towards people.

We asked Jack to tell us more. “It hurt a fair bit,” he told us. “You’re just shocked at first. I didn’t pass out. It didn’t get a main artery or anything. I got 110 stitches on the outside of my leg and over 500 internal stitches. I didn’t go surfing again for three months, but I was back in the water again in a month. I couldn’t walk, so I’d crawl over the beach and go bodyboarding.”

Jack is still an avid surfer and occasionally posts photos of himself surfing on his Instagram and Facebook accounts (he looks like a very good surfer, too, which lined up with what we’d heard from his mechanic, Chappy Fiene). Does Jack worry about getting attacked again? “I mean, I try not to think about it,” Jack told us, “but it’s always in the back of my head. When I’m out in the back alone waiting for a wave, or when a washout set has come through and there’s just whitewater around, I like to try to keep my limbs out of the water [laughs].”