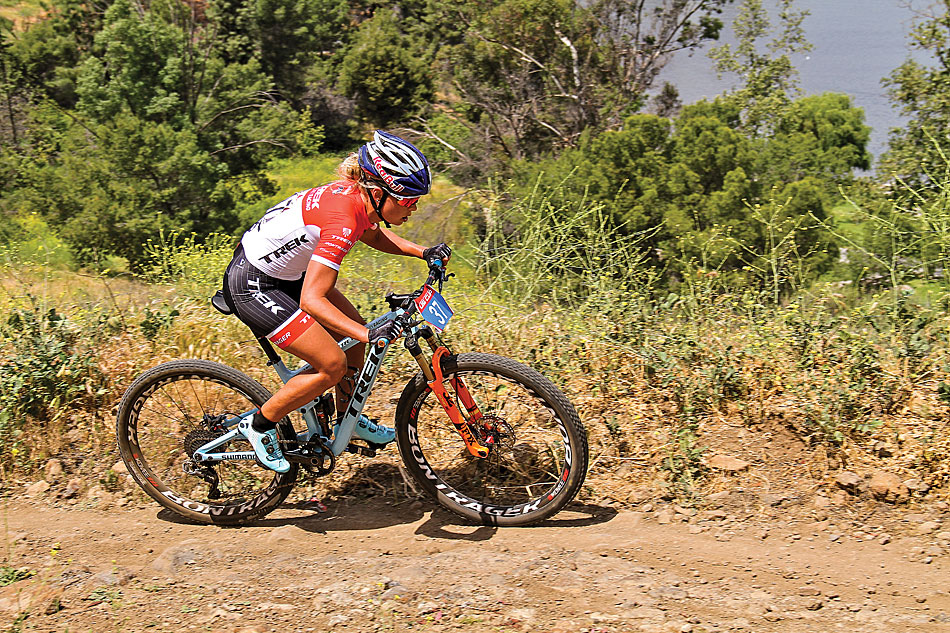 Power to the pedals: Don’t let her cheerful demeanor fool you. Emily is a powerhouse on her bike, whether she’s battling for medals on the World Cup circuit or, as shown here, racking up UCI points at Bonelli Park in California. Photo by Tristan Courtney

Emily Batty ranks among the top female mountain bikers on the planet and is one of the most popular ones too. How she rose to that position is not what one might guess.

Emily was the third of four children growing up on her parents’ cattle farm in eastern Canada. She grew up milking cows, among other chores. When her father and two older brothers took up mountain biking, Emily was quick to follow them. She got her first mountain bike when she was around 6 years old. She didn’t take up racing with her family right away, though. When her brothers raced, Emily handed them water bottles.

Eventually, when Emily was 13, she took up racing too. Emily was soon being recognized as one of the top young racers in Canada. She raced road, cyclocross and mountain bikes. She excelled at all of them, but mountain biking was her favorite.

Emily won nine provincial titles and nine national championships while still in the amateur ranks. After that, she turned pro and quickly started working her way up through the professional ranks. We first met Emily in 2009 on our first trip to Ray’s Indoor Mountain Bike Park in Cleveland, Ohio. Ray was putting on a pro race for both men and women, with $1000 in cash (all in 1-dollar bills) going to the winner of each class. Emily was 20, but she looked more like 16. She and Catharine Pendrel were the top two riders among the women in that event. Catharine would go on to win two Elite Women’s UCI World Championships and two overall World Cup titles in the years ahead, but Emily beat her at Ray’s that day to take home the $1000.

Emily has since risen to become one of the top cross-country racers on the planet. She’s won two Canadian National Championship titles in the elite ranks. She also won the Pan American Games title two years ago. At the end of 2016, Emily was ranked third on the planet in the World Cup series. When she got to the World Championships last year, she finished third and picked up the bronze medal. The Olympics, however, were another matter.

Emily has qualified for the Olympics twice. The first time, in London in 2012, she broke her collarbone in training, three days before the big Olympic mountain bike race. Unwilling to sit out the event, Emily raced anyway, putting up with the pain just so she could actually race in the Olympics. She ended up finishing 24th.