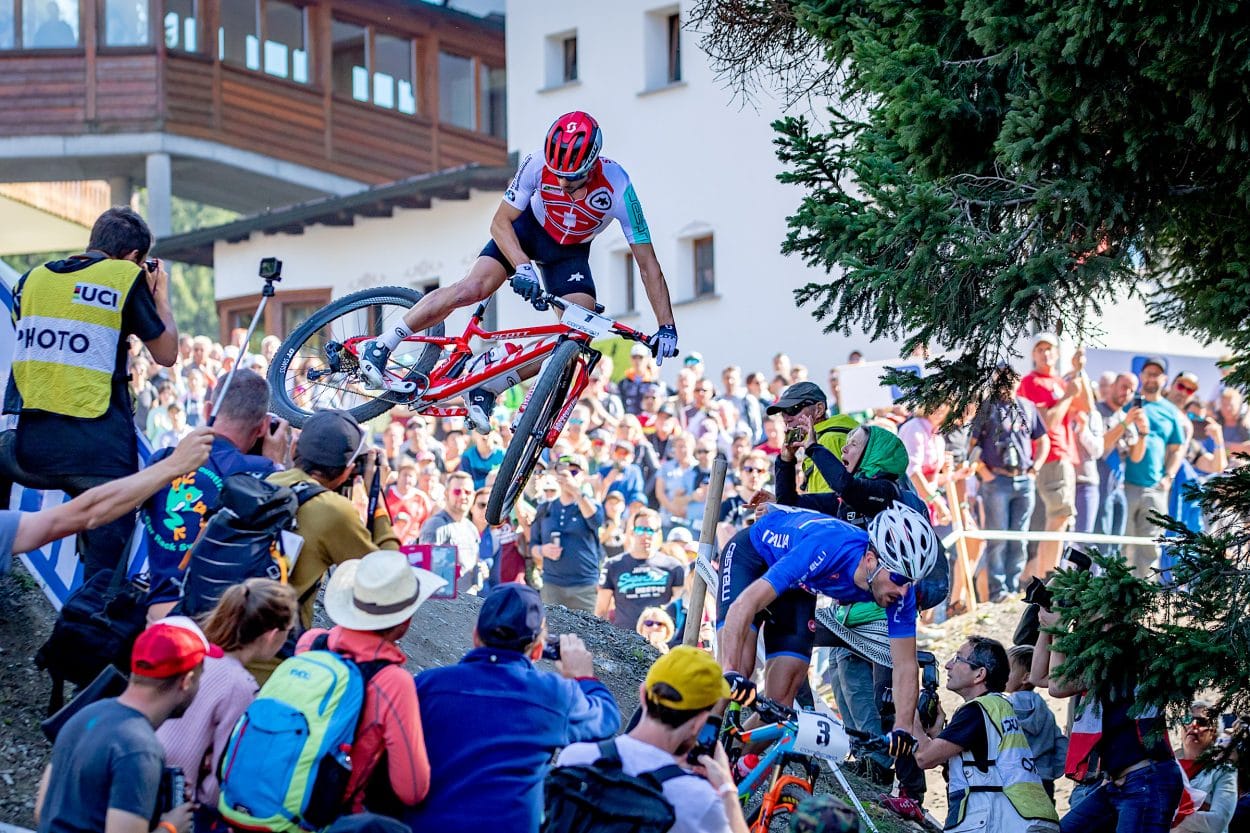 Nino throws down some style for his fans on the way to his 2018 World Championship at Lenzerheide in his home country of Switzerland. Photo: Armin Kuestenbrueck/EGO Promotion

While Nino wasn’t able to win all of the World Cup races this year, he still won four of the seven events and took the title decisively. Nino now has the most Elite Men’s cross-country World Championships in history, with seven altogether, along with six overall World Cup titles—one shy of the record set in 2016 by the now-retired Julien Absalon.

Nino also has three Olympic medals (one gold, one silver, and one bronze) compared to Absalon’s two Olympic gold medals.

Nino’s team manager at Scott-SRAM, Thomas Frischknecht, racked up three World Cup titles and one UCI World Championship in the 1990s. “Frischi,” as he’s known to his friends, was widely considered the top male cross-country racer of that decade, but he told MBA back in 2017 that he considers Nino the greatest mountain bike racer of all time.

We decided it was time to take another look at Nino, his incredible win record and the bike that carried him to the top of the world’s most prestigious mountain bike podiums in 2018. 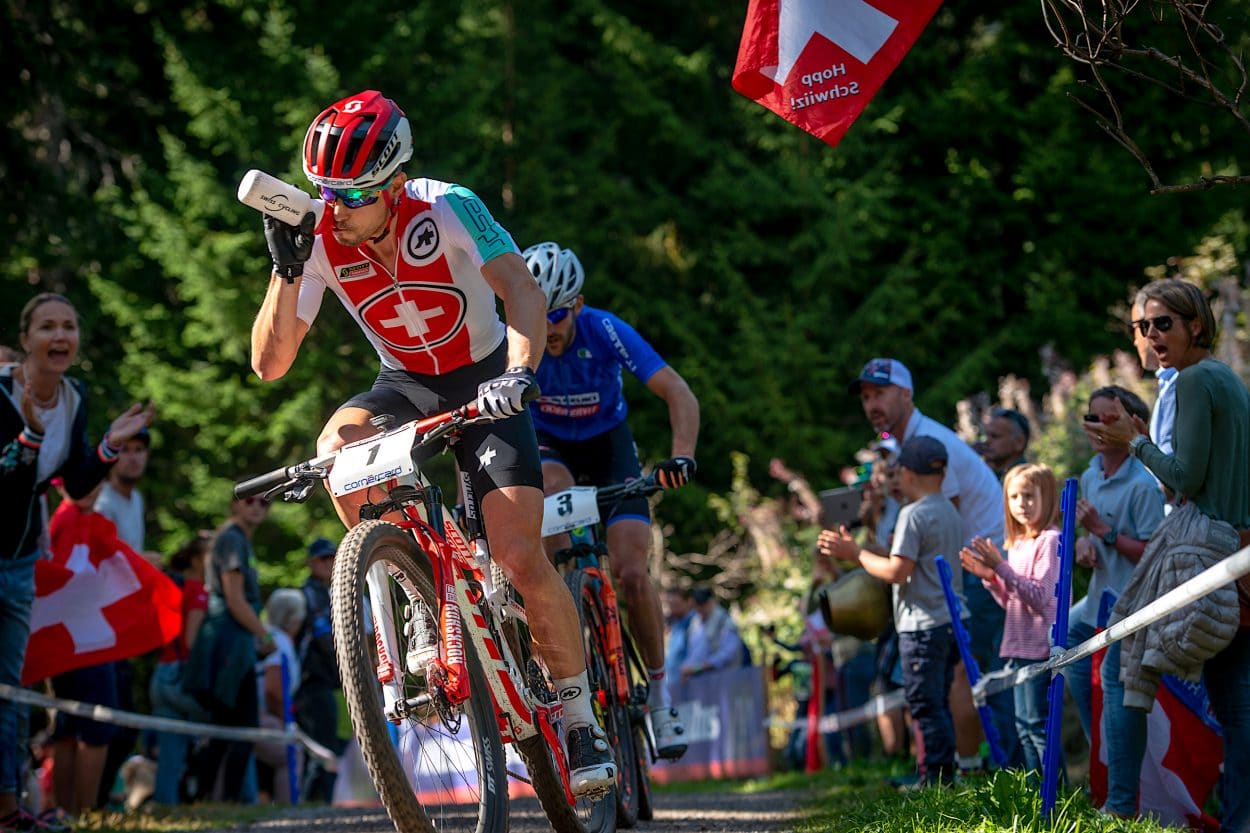 Nino grabs a quick drink on the way to his 2018 World Championship. Photo: Armin Kuestenbrueck/EGO Promotion 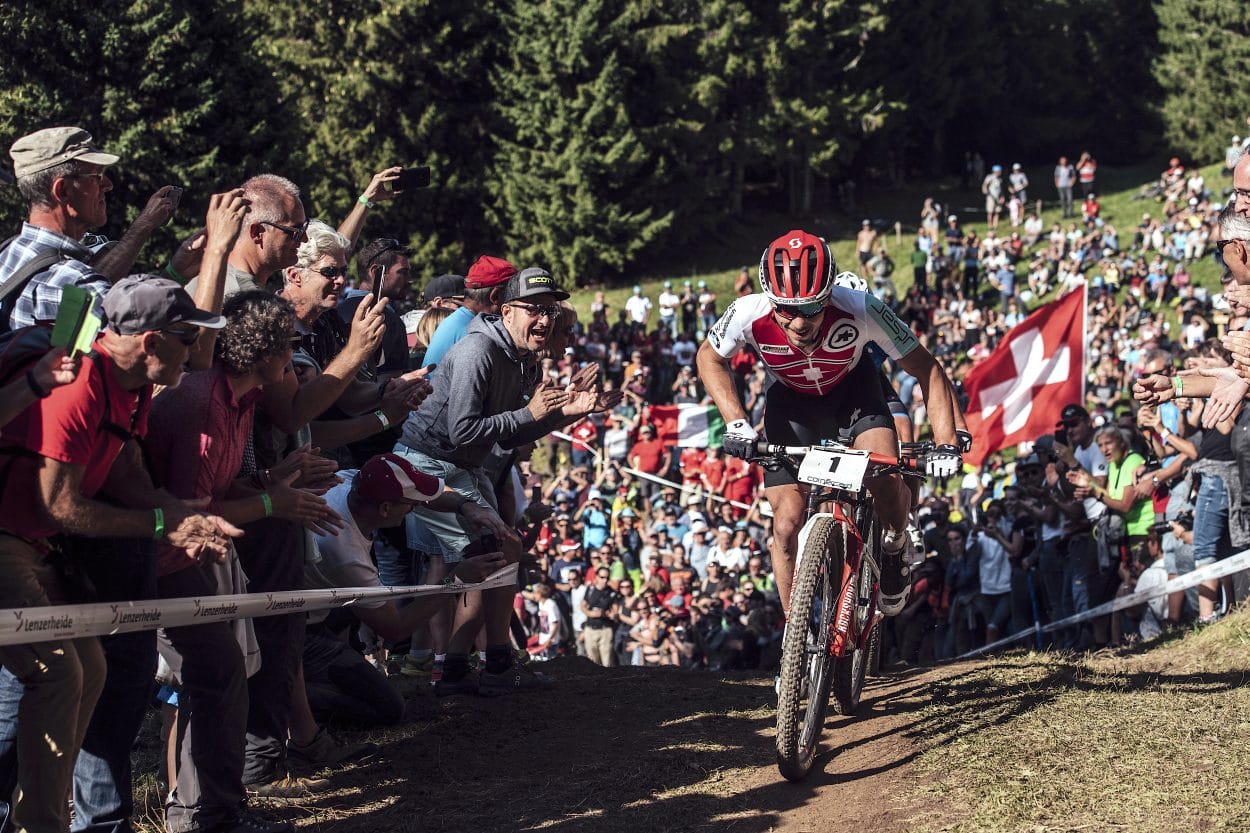 Estimated price: “There is no estimated value of this bike as there is an electronic drivetrain on it that has not even been released.” — Thomas Frischknecht/Scott-SRAM (Notice that there is no deraileur cable.) 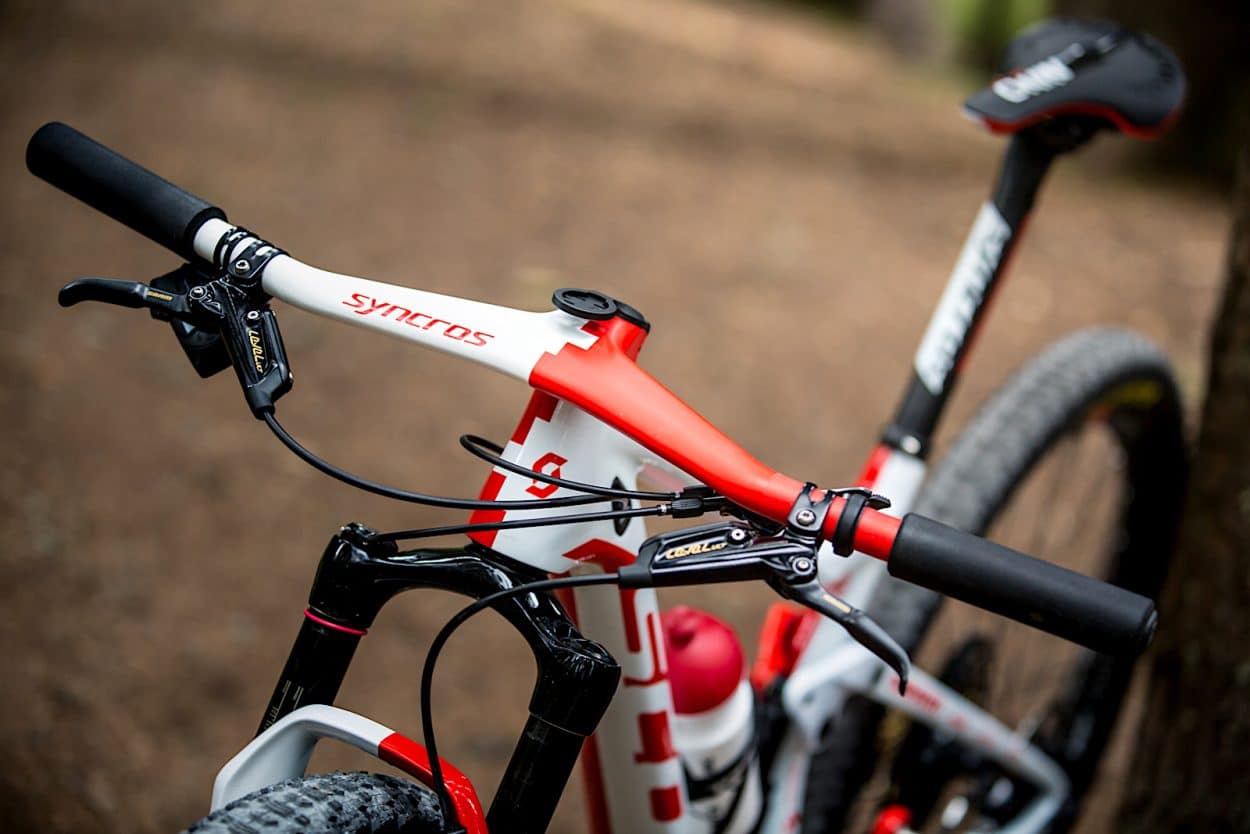 4. Remote: Scott TwinLoc system, which allows Nino to lock or unlock the suspension while riding 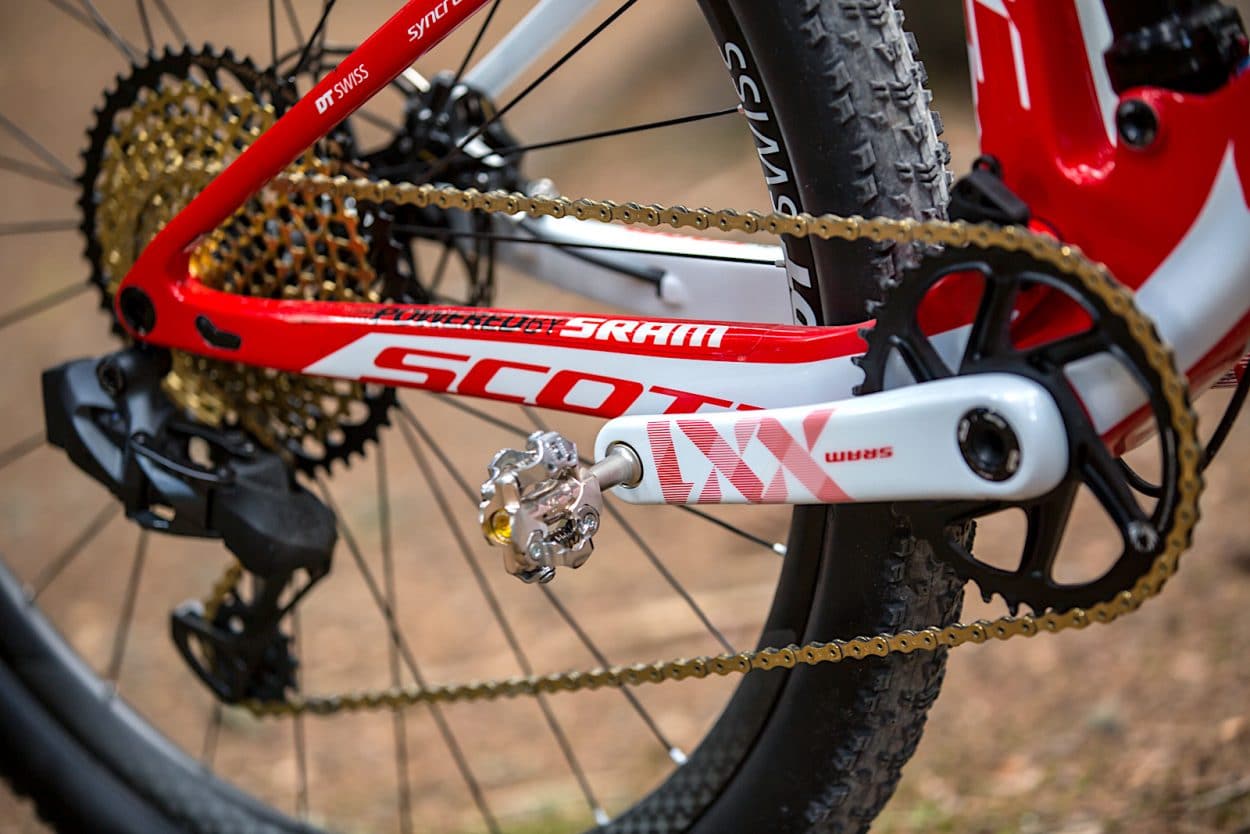 Regarding Nino’s new wireless drivetrain, SRAM would only say, “Nino has been racing a Blackbox SRAM Eagle™ drivetrain since August [ … ] we are constantly experimenting with new technology, and designing, building and testing new products. At this time, we cannot comment on photos, rumors or speculation.” Photo: Jochen Haar 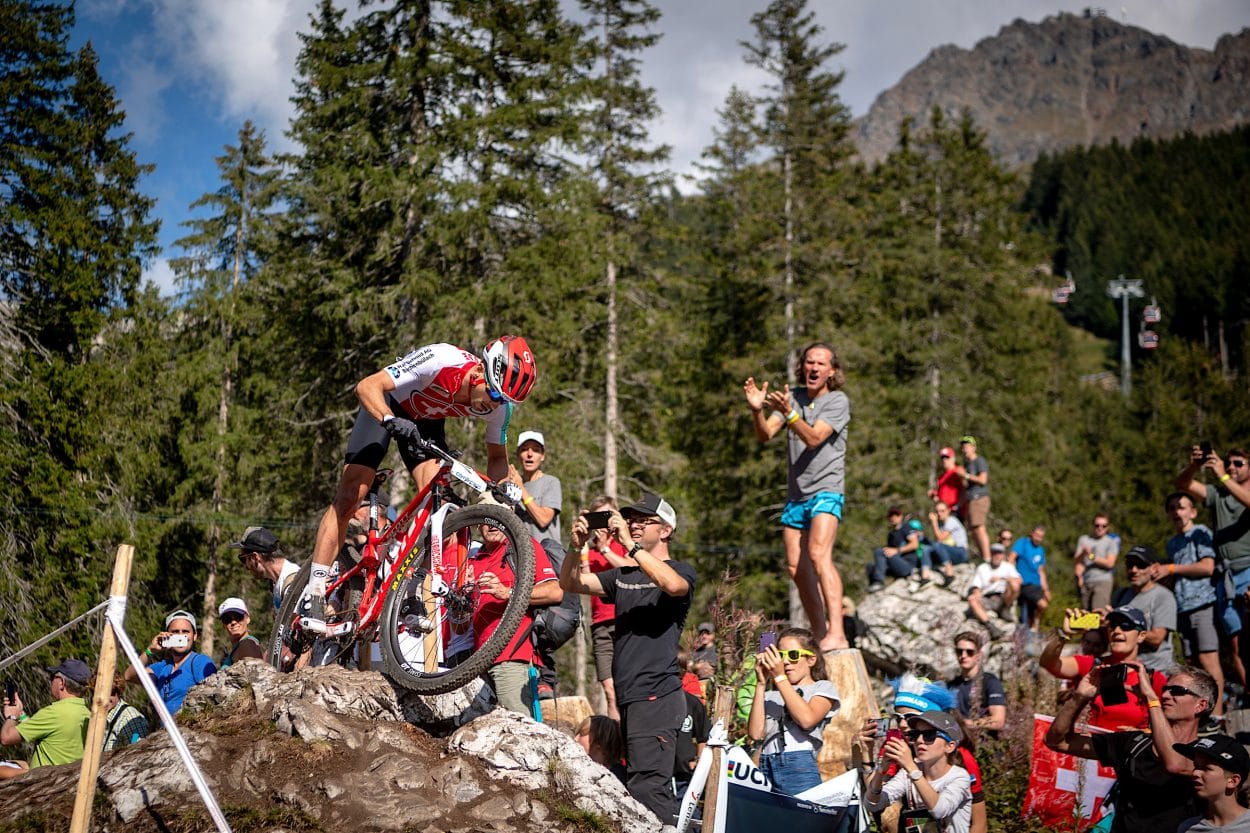