Inside the Pro’s Bikes – Nino Schurter 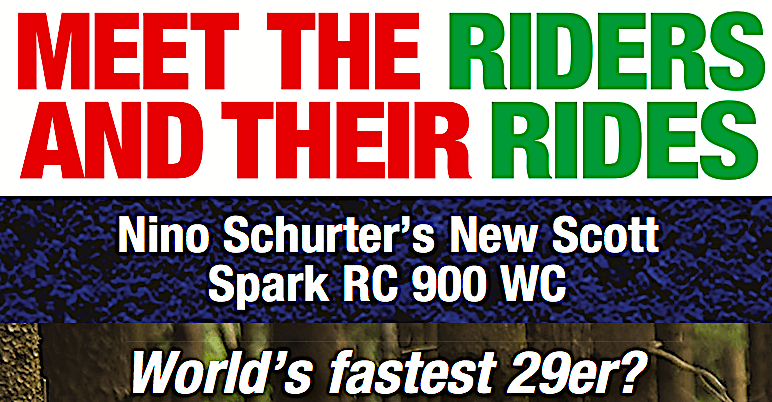 Nino Schurter seems like he’s aiming to go down in the history books as the world’s greatest mountain biker. And for all we know, he just might pull it off. 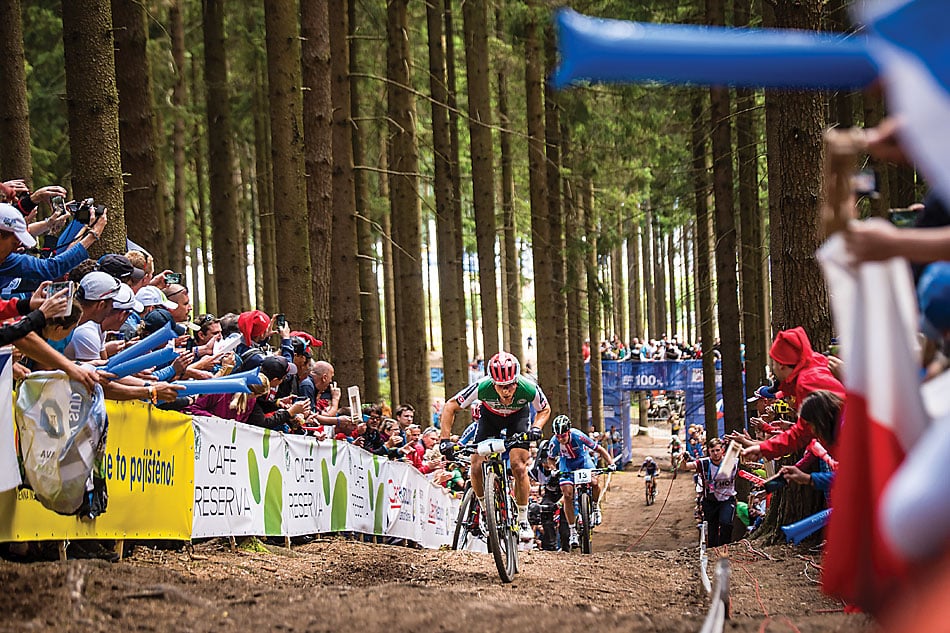 2016 World Championships: Once Nino took over the lead, no one could challenge him. 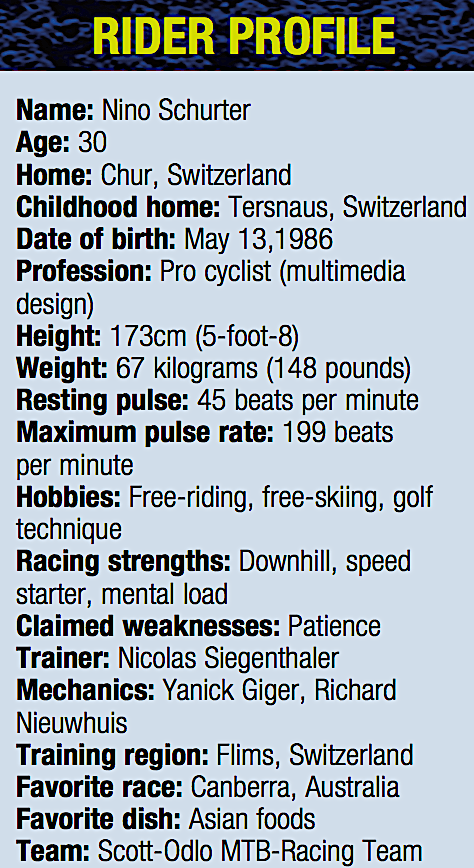 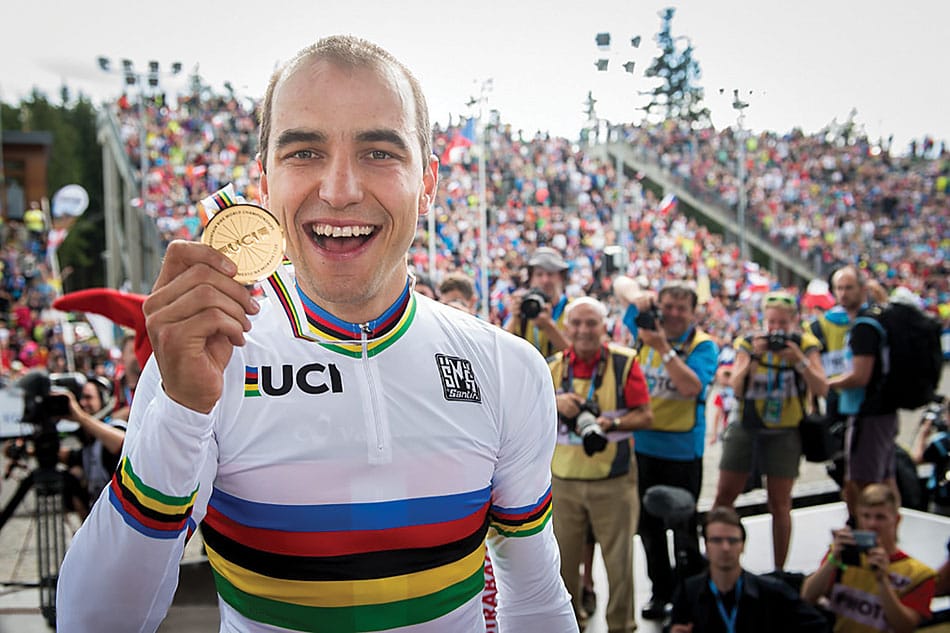 If Nino can win the Olympic gold medal this summer and win it again in 2020, he’ll have tied Absalon’s record for the most Olympic mountain biking gold medals. (Absalon won gold in 2004 and 2008; Jaroslav Kulhavy won gold in 2012. Schurter has so far won one bronze medal in 2008 and one silver in 2012.)

Nino is also a leader when it comes to innovative technology. Nino was one of the very first racers to switch from 26-inch wheels to 27.5-inch wheels in 2012 when he dominated the World Cup series on the then-revolutionary wheel size. 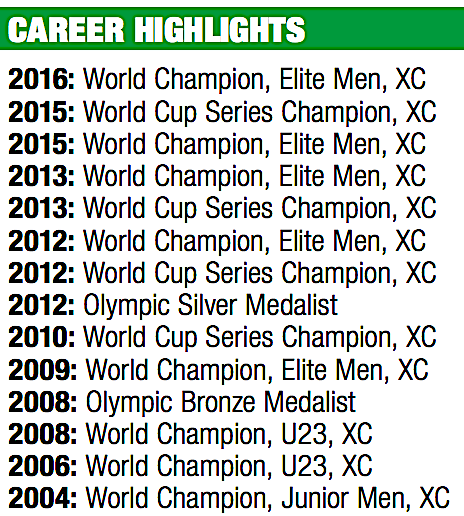 For 2016 Nino has made another dramatic change in that department. A few months ago Nino started racing a 29-inch-wheeled bike in preparation for the 2016 Olympics. After pre-riding the 2016 Olympic mountain bike course last year, Nino reportedly decided that he would have a better chance of winning the gold medal if he were riding the Rio race course on 29-inch wheels. As a result, Nino and Scott collaborated to create a new bike for him to ride this year, and they came up with a working model this spring. Nino started racing with this new, lighter, 29-inch-wheeled Scott Spark this past spring so that Nino could get used to it in time for the Olympics in Rio.

In Nino’s first outing on the new size at this year’s fourth World Cup race, he got two flat tires and still finished fourth. He also won two smaller races on the bike, races that weren’t part of the World Cup series. After that it came time for a tougher test—this summer’s World Championships in the Czech Republic. The new bike definitely worked. Nino won his fifth Elite Men’s World Championship on it. It was his first gold-medal victory on a 29er. If all goes well, he’ll earn another one in August. 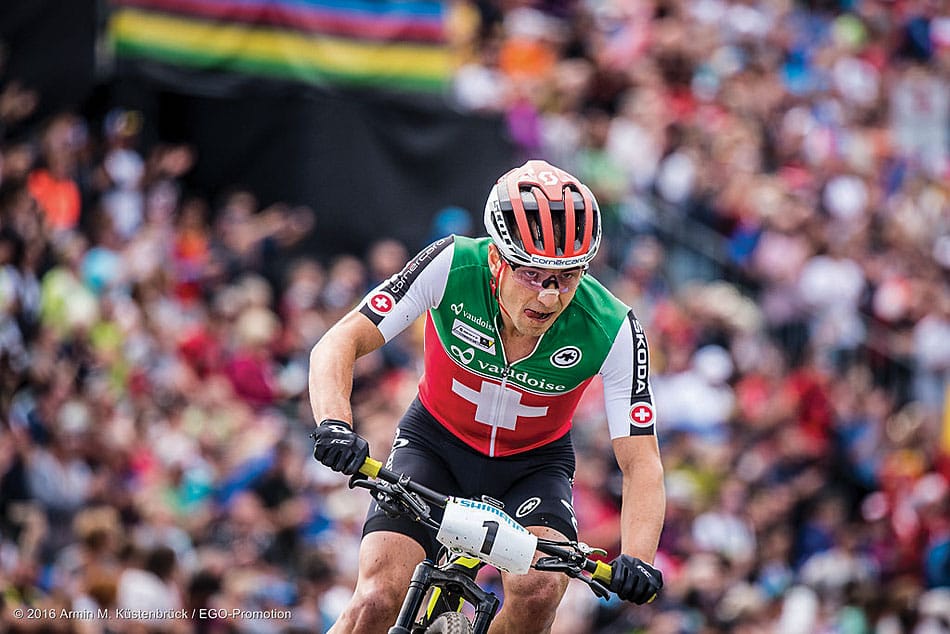 Closing in on the prize: Nino was clearly determined to win the 2016 World Championships in preparation for Rio. Photo by Armin M. Kürtenbrück / EGO-Promotion 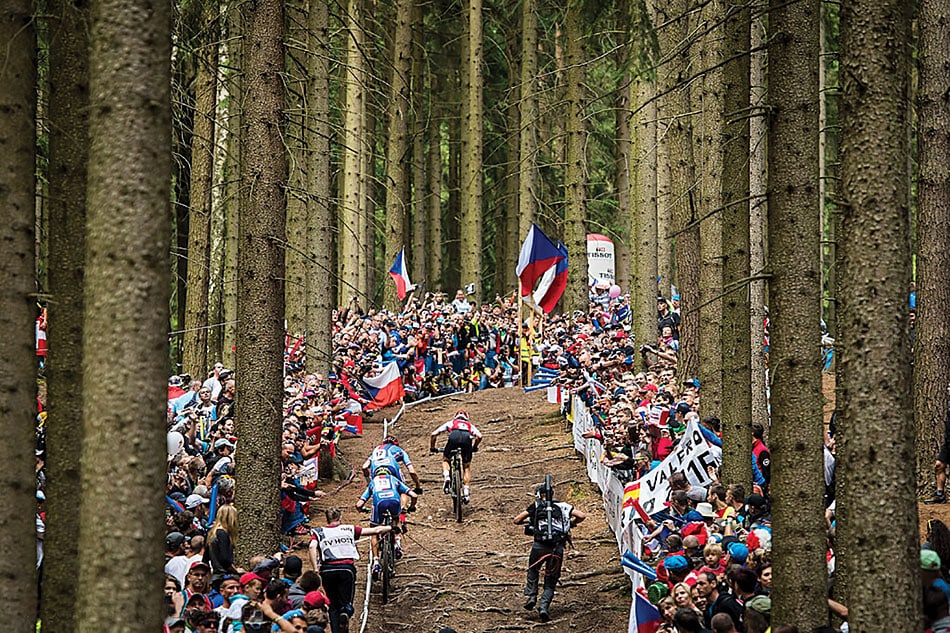 Tough climb: A huge crowd watched Nino lead the charge up the hill, with Kulhavy (12) and Andrej Cink (13) in tow. Photo by Andreas Dobslaff / EGO-Promotion 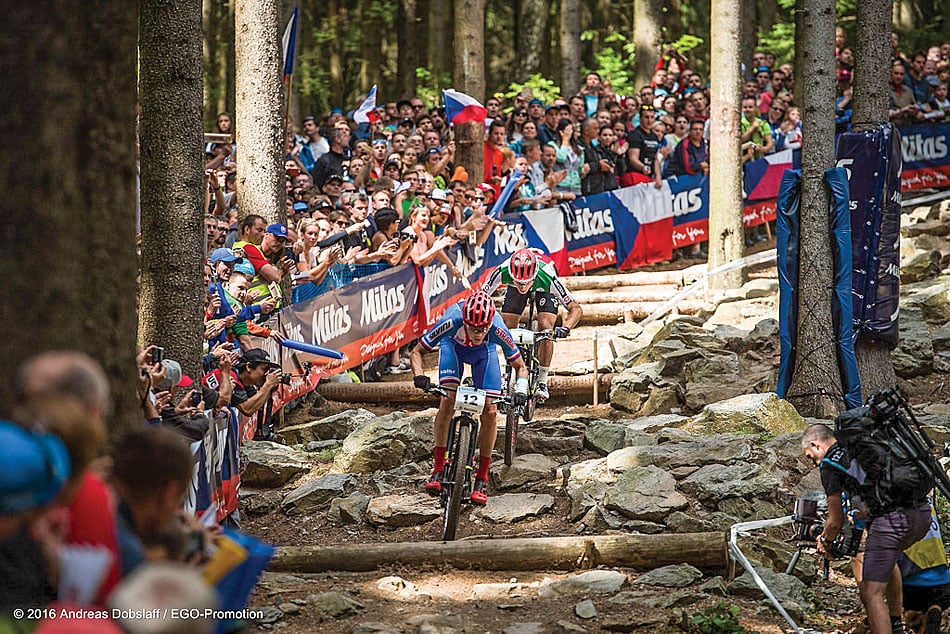 Hometown favorite: Jaroslav Kulhavy (12) of the Czech Republic led the beginning of the race, but Nino (1) stayed right behind him. Photo by Andreas Dobslaff / EGO-Promotion 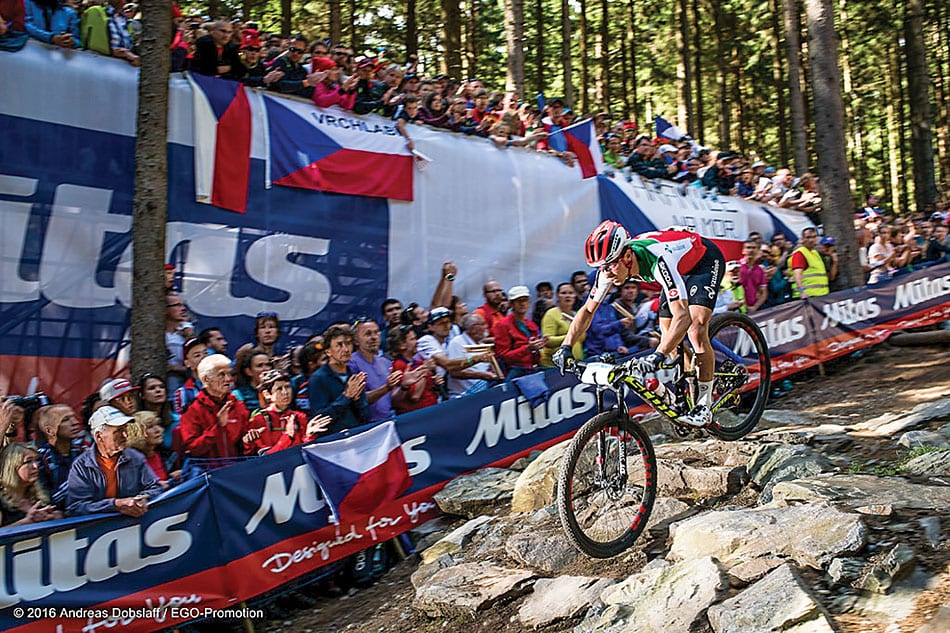 On his way to the win: Nino’s skills as a cross-country descender are probably the best of any cross-country racer in the world. Photo by Andreas Dobslaff / EGO-Promotion 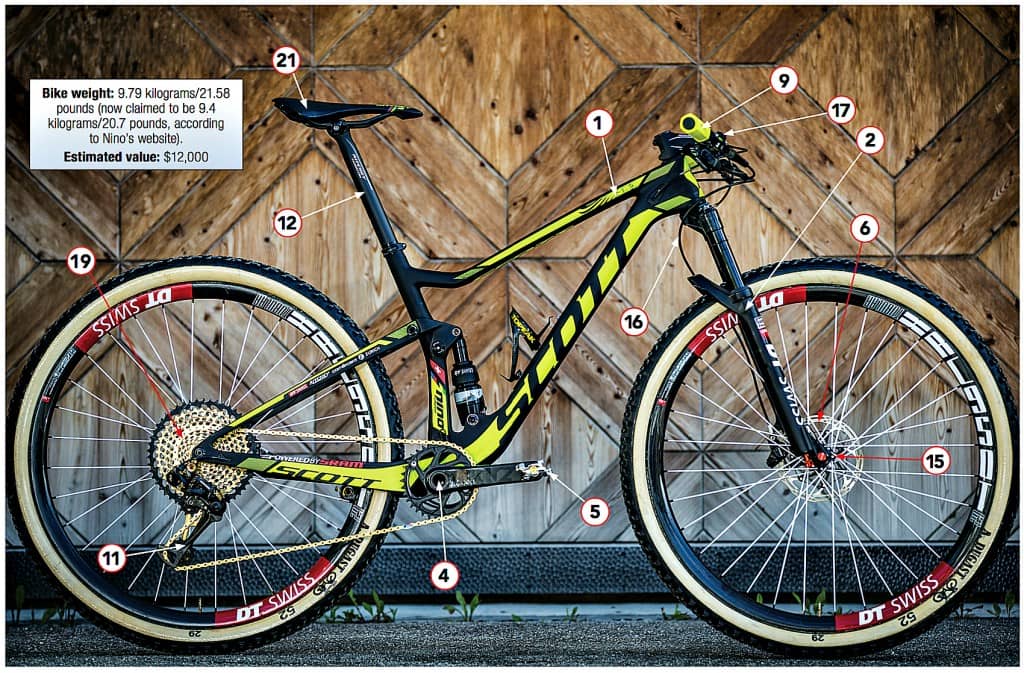 “The frame is 140 grams lighter than the old one,” Scott tells us. It has a head angle that is 1.3 degrees slacker, a chainstay length that is 13mm shorter and a steeper seat-tube angle. The bike also features a lower standover height than Nino’s previous bike. The newest, top-of-the-line Spark RC-series frames are designed for use with 1x drivetrains, allowing Scott to make the frame both lighter and stronger by leaving out the mounting hardware needed for a front derailleur. The standard Spark-series frames are designed for use with both 1x and 2x drivetrain systems. “The Boost technology results in increased wheel stiffness and improved tire clearance,” Scott claims. Scott tells us that the new frame’s head angle is 68.5 degrees and the seat angle is 73.8 degrees. Nino’s 2016 World Championship-winning bike reportedly did not use the newest carbon fiber layup system that Scott had developed for the production models. That new layup pattern reportedly saves about 100 grams (just under 4 ounces) per frame. Nino used the more familiar HMX carbon layup in his newest race bike in order to make sure there were no surprises while racing for his fifth World Championship on the new frame. 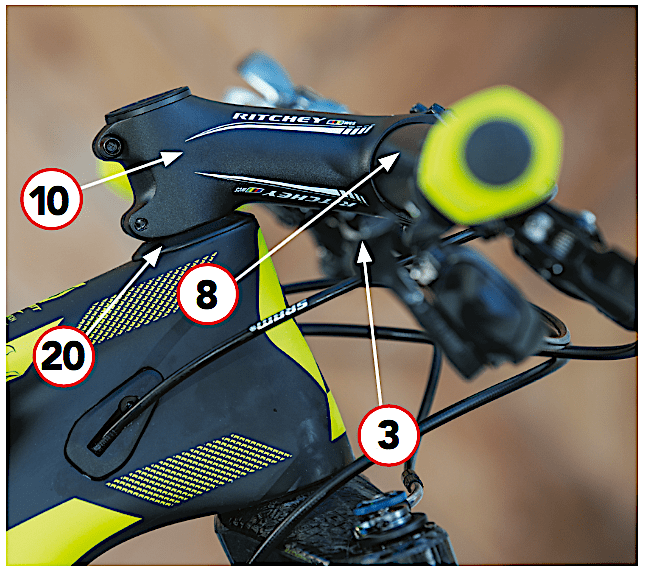 Nino has always been a believer in a low handlebar position.

4. Crankset: SRAM XX1 Eagle carbon cranks, with SRAM 38-tooth X-Sync Eagle ring (Nino may opt for a 40-tooth ring, depending on the course). 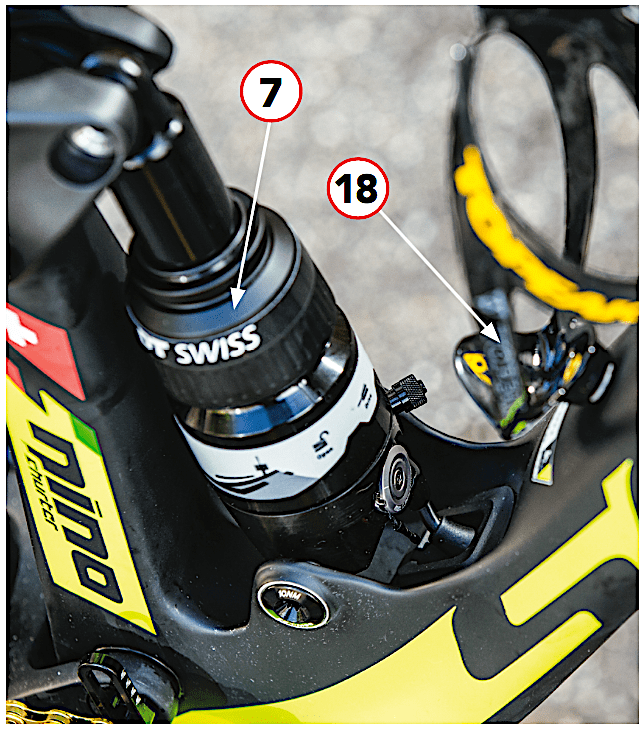 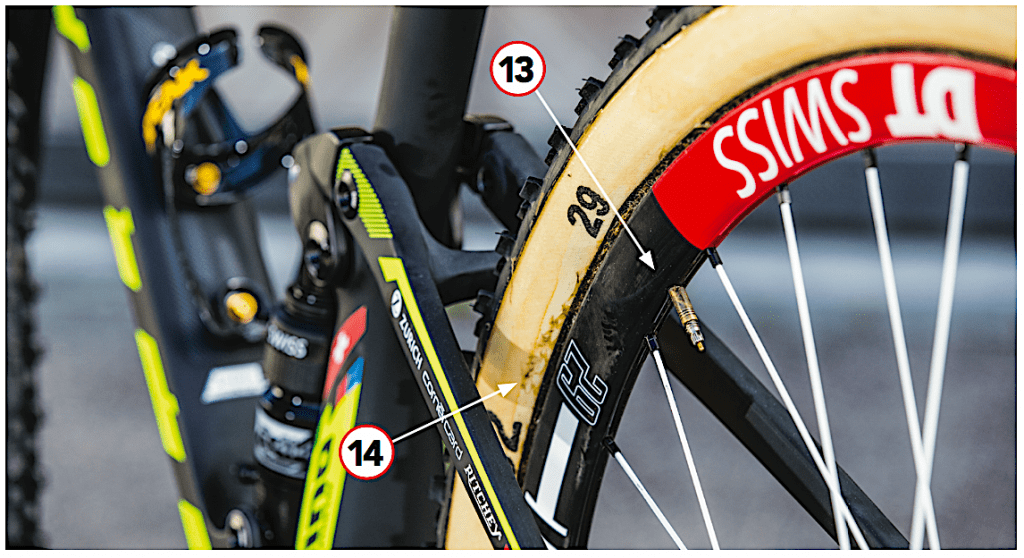 While Nino’s official race tires (shown here) are Dugast 29-inch tubulars, Nino clearly raced something different in this year’s World Championships. Some observers said they were Maxxis Aspens with the logos blacked out. No one connected with Nino or with Scott would comment on the matter. Nino suffered two flats at La Bresse, France (one on a Dugast tubular, one on the conventional tire used to replace it), during Schurter’s first World Cup race on his new 29er, so we can draw our own conclusions. 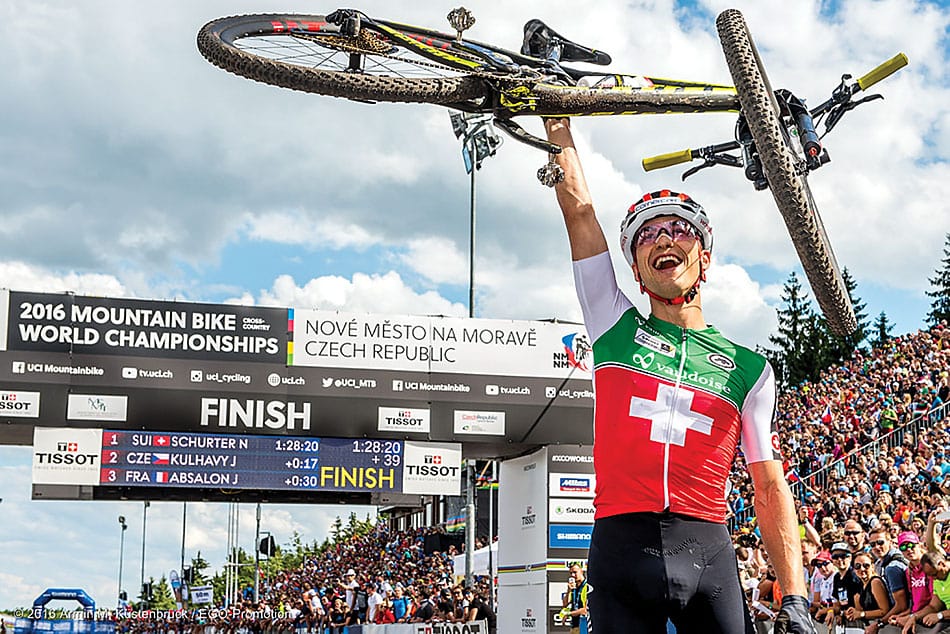 Mission accomplished: Schurter hoisted his bike in victory at the finish of the 2016 World Championships.
Photo by Armin M. Kürtenbrück / EGO-Promotion

Photo of the Day: High-Speed Turn in Black and White

Photo of the Day: Julien Markewitz