MEET THE RIDERS AND THEIR RIDES
GT’S MARTIN MAES 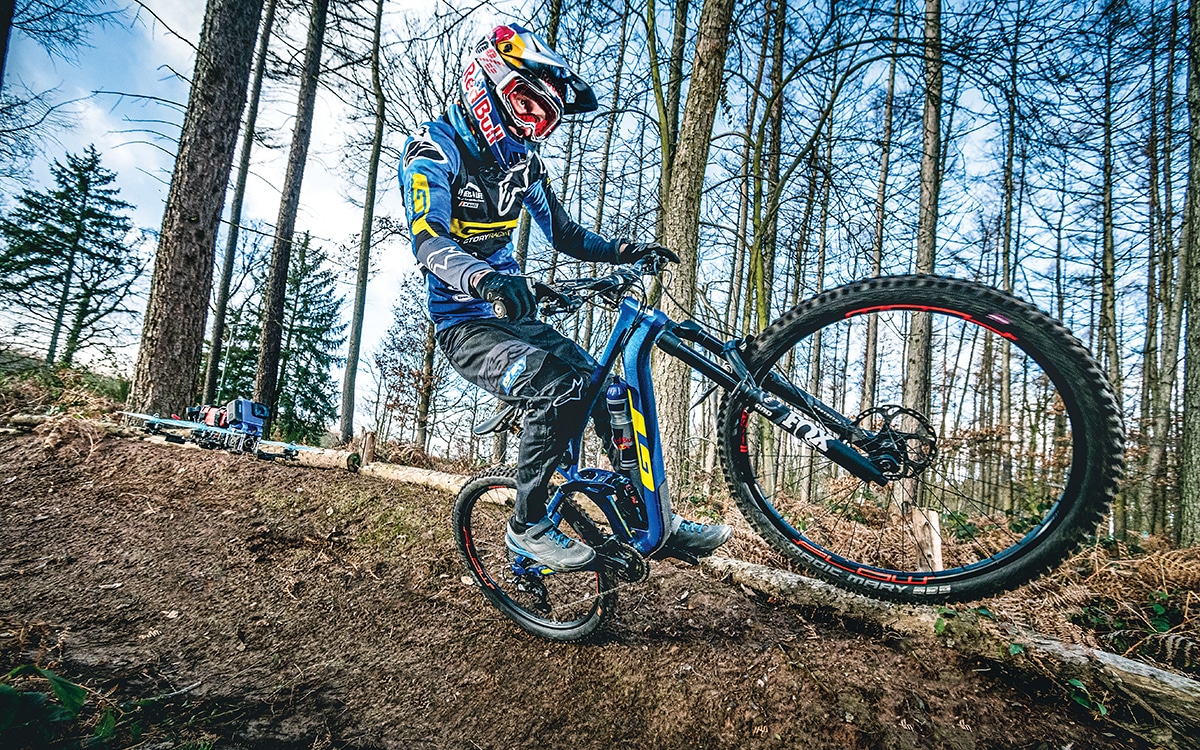 Martin Maes is a phenomenal rider. Besides being one of the top enduro racers on the planet, he’s also one of the top downhillers. He’s won numerous Enduro World Series (EWS) races, as well as the final downhill event of the UCI World Cup series in 2018. On top of that, a few years ago he also won the Pro Men’s Dual-Slalom race at the Sea Otter Classic—an event said to be equal to a Dual-Slalom World Championship.

To say that Martin has remarkable speed and bike-handling skills would be an understatement. He’s practically superhuman when it comes to going fast on a mountain bike. Read on to learn more about Maes and his GT Force Carbon Enduro bike. 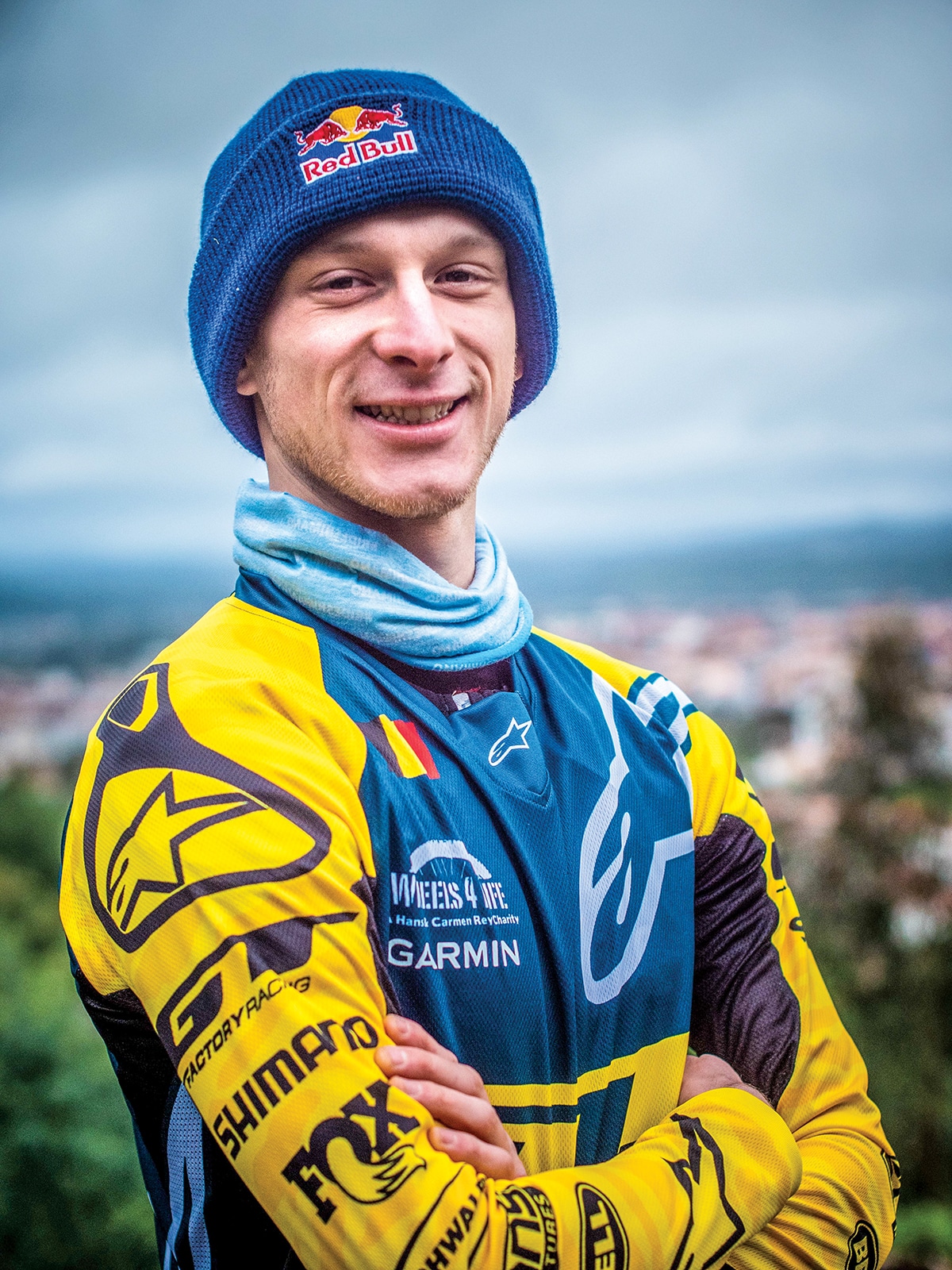 Martin Maes, a man of many talents. Photo courtesy of GT

Marital status: In a relationship

Started racing or competing: At the age of 6

Favorite course: Fort William for downhill and Whistler for enduro

Most embarrassing moment: When I lose a race because of a stupid mistake.

Always takes on a trip: A bike or motorbike!

What you would be if you were not a racer: It is a challenge for me to not imagine myself racing. Probably something physical—a gardener or a farmer! 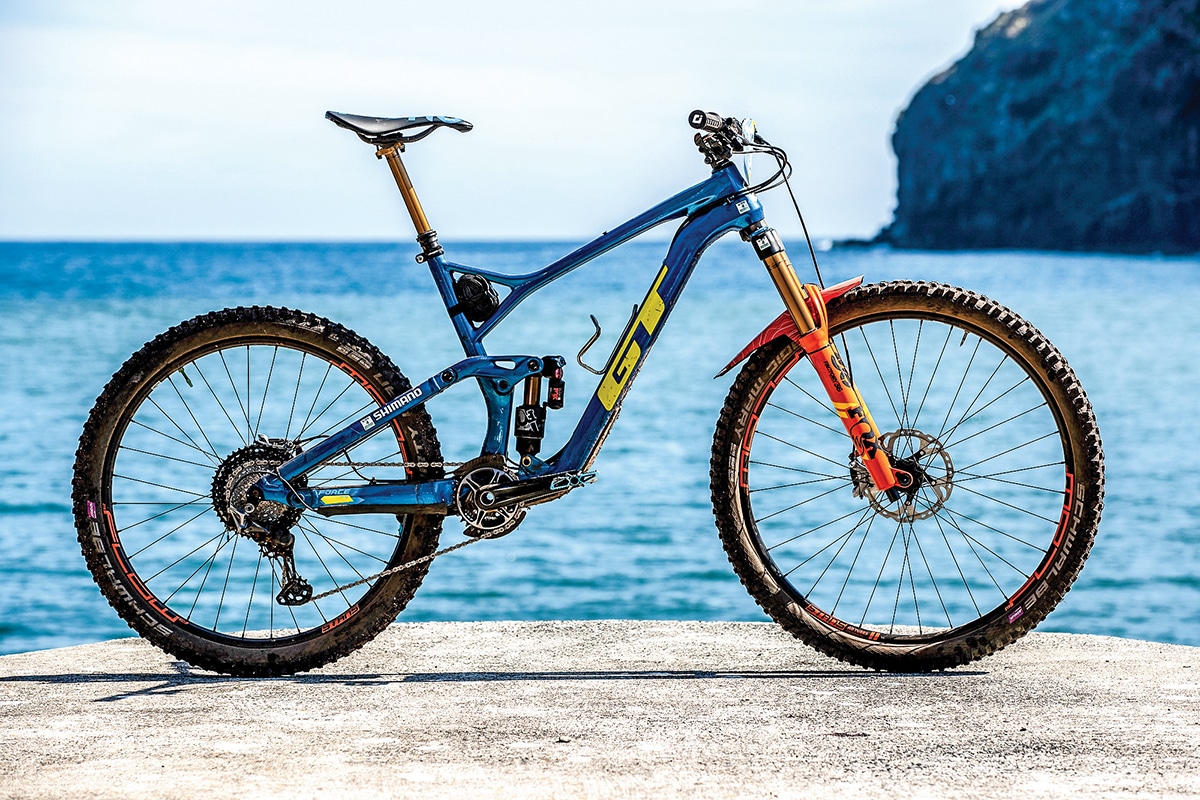 This is the GT Force that Martin rode to win the Enduro World Series event in Madeira in May of 2019. Note the 29-inch front wheel and the 27.5-inch rear. Photo by Sven Martin, courtesy of Cannondale 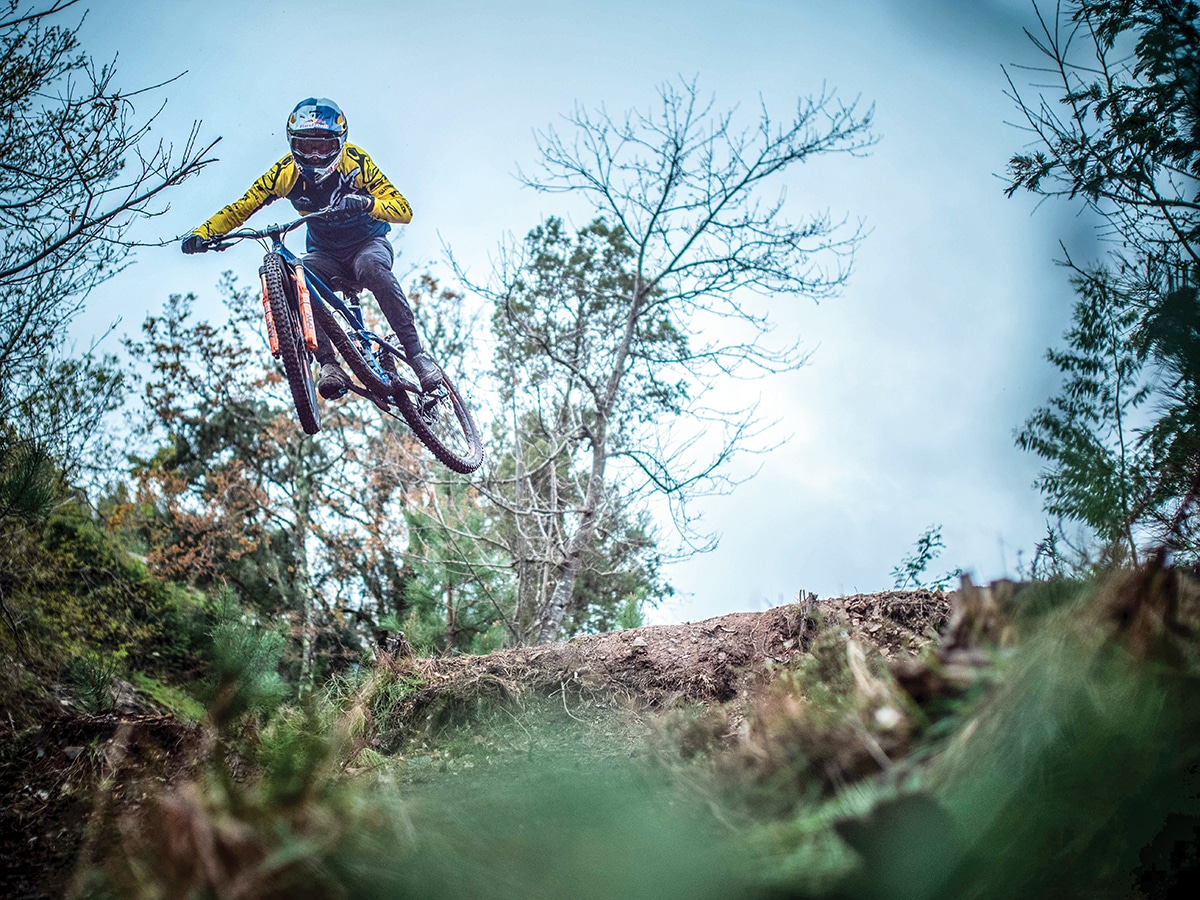 Shock and settings: Fox Float X2; settings depend on terrain and race.

“We also run a cut Dirty Dan when conditions get slippery or super dry for more traction. Air pressure remains the same.” 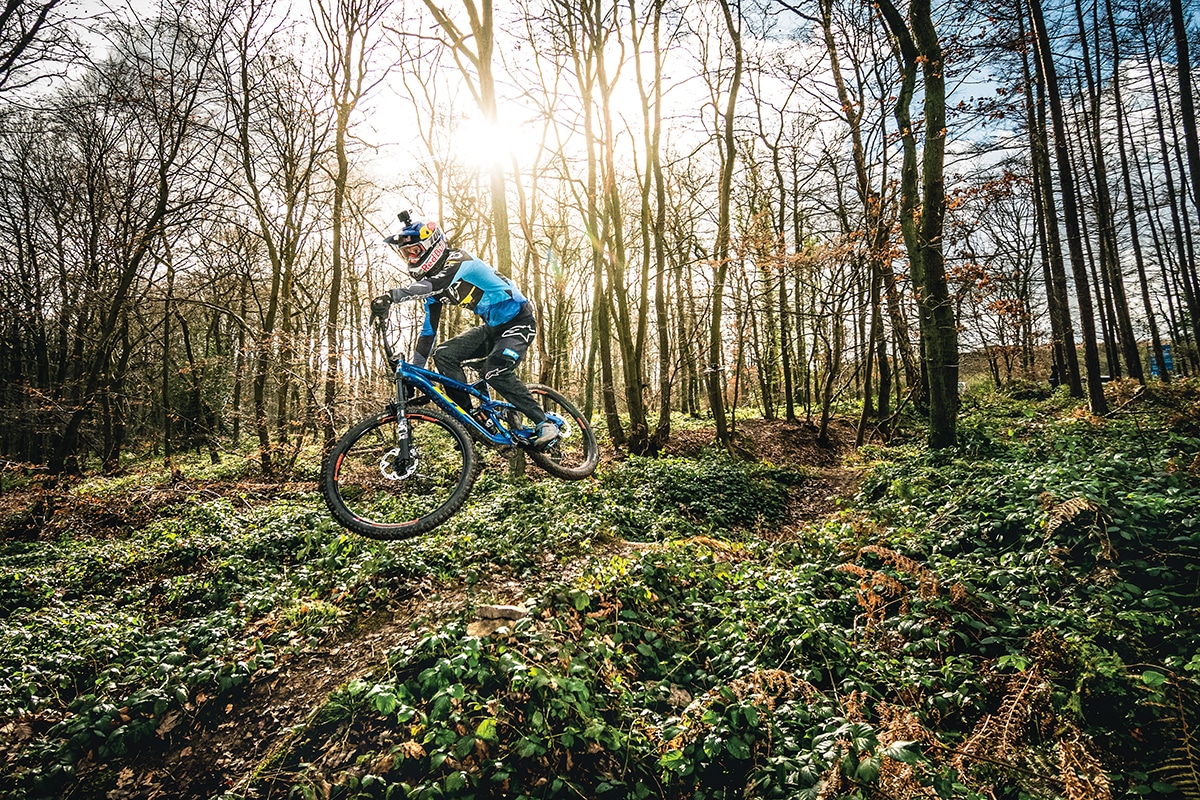 When he’s not competing against other racers, Martin has been known to race against drones, as he was doing in this photo from Red Bull’s Race Against the Machine. Photo: Red Bull Content Pool

Extras: “We run Cushcore rim protection in the rear and a OneUp multi-tool/plug in the steering tube.”

Maes: I grew up in Neupré, Belgium. It is a super-chill village surrounded by a lot of forests. I consider myself lucky to have grown up in a place where it is easy to go mountain biking and do outside activities. Our trails are some of the best!

Maes: My father is a mountain bike coach. He runs a mountain bike school that has gotten very popular over the last couple of years. He manages to teach over 200 kids every week. My mother takes care of babies in a nursery.

Maes: At the age of 2 years and a couple of months. My parents still think it was very early!

Maes: Pretty much as soon as I could. My dad was an ex-professional rider. I’ve always looked up to him, and I wanted to follow his path since the very beginning. 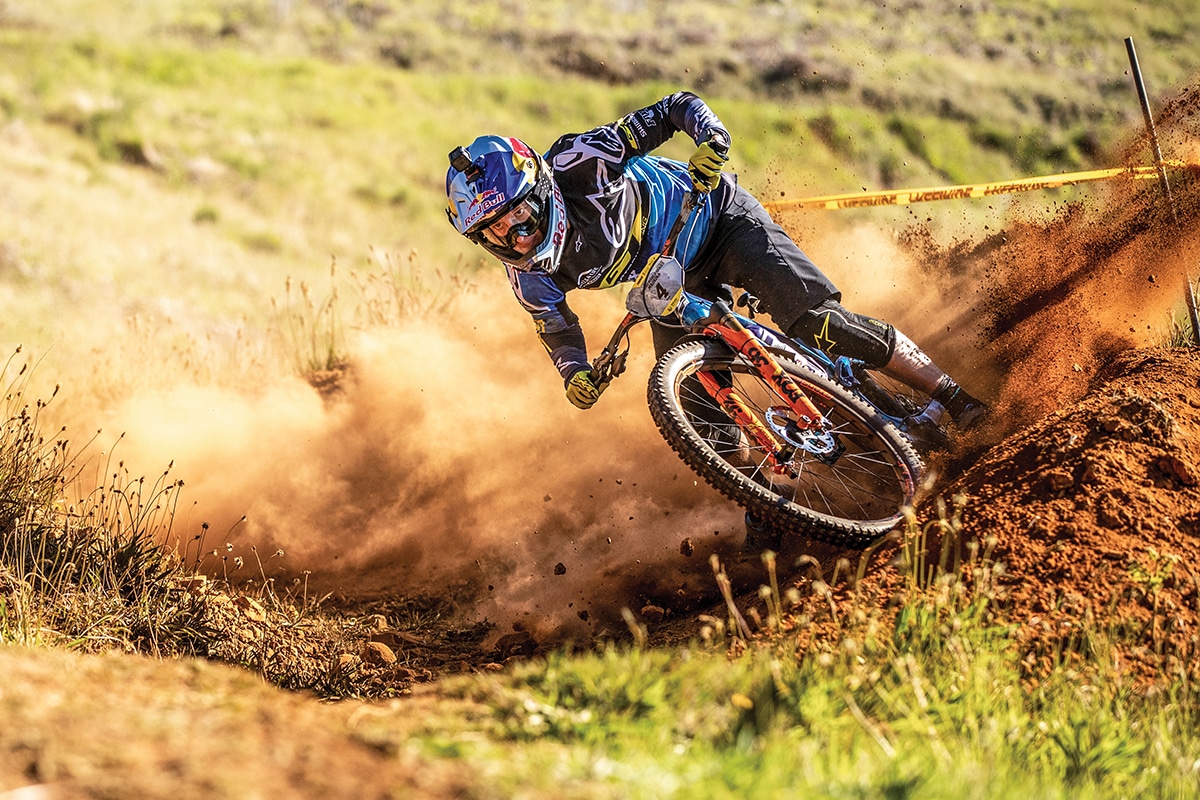 Maes blows up a berm on his way to winning the EWS Madeira event in 2019. Photo by Sven Martin

Maes: I was 6, and I was racing against older kids of 9 years old, so I didn’t win at first, but I still remember that I really wanted to win. My older brother also played a big role. He was 3 years older than me, but I wanted to keep up with him so bad. We had quite a few jealousy fights of course.

MBA: What titles have you won or come close to winning?

Maes: I still remember finishing second at my first BMX race when I was 8. I went back two weeks after and won. Winning has always been important to me—it’s kind of in our blood in the family.

Maes: I turned professional very early, and I was still at the school. It was important for me to finish school till 18 to be able to go to college if I needed to. Being a professional athlete requires a lot of time and sacrifices to perform at the highest level. It was a general school. I actually enjoyed my time there, as we could go out road riding twice a week for a few hours. There were talented road riders who’ve turned pro now, so it was a great challenge to ride with them, and I still benefit from all the training we have done now.

Maes: My main focus is to be competitive every weekend!

Maes: I ride motorbikes, run and go to the gym, but, more important, I ride my bikes and have fun!

Maes: I can’t give you all of my secrets, can I?