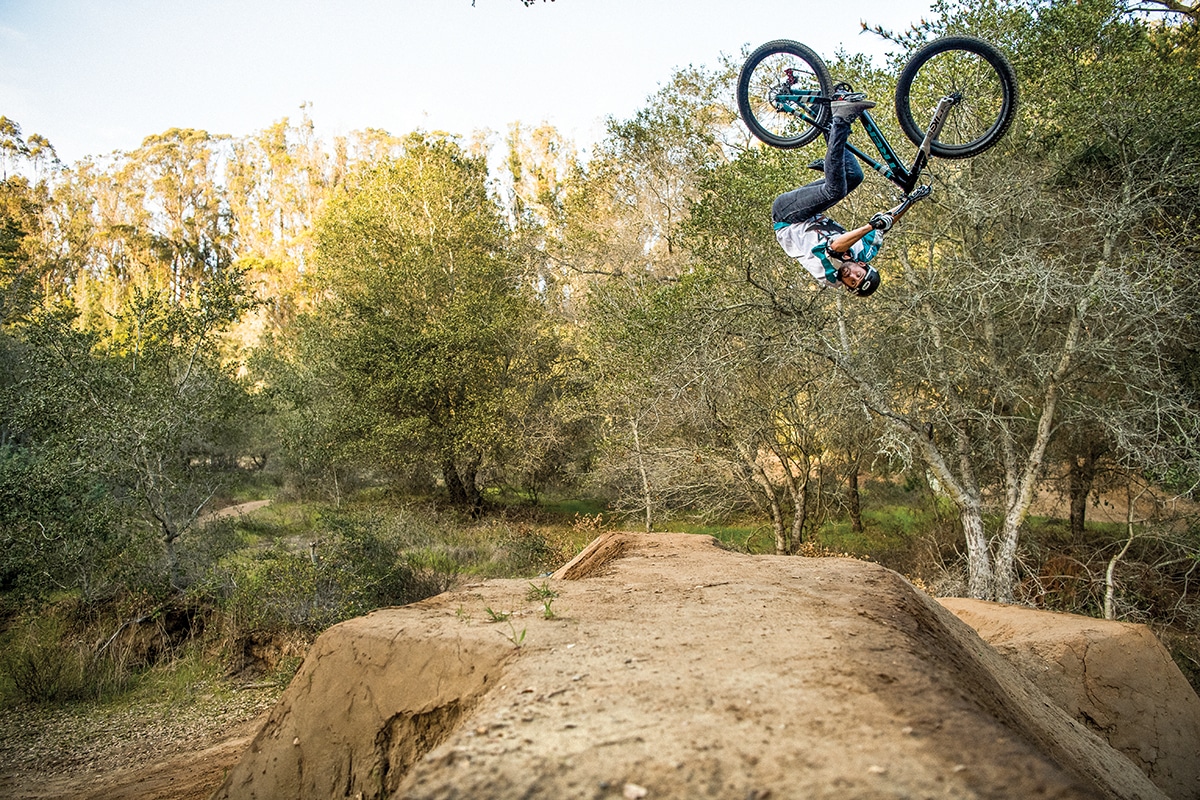 Goals: Have the most fun always

Most embarrassing moment: Too many to list. Can’t take life too seriously.

What you would be if you were not a bike rider: Trail builder

Frame: “Trek Session Park. Medium. 27.5-inch wheels. Carbon. Best DH bike for what I like to do.”

Inner tubes or tubeless system: “Tubeless up front. Tube in the rear. As for the sealant, I just use the Bontrager stuff up front and a Bontrager tube out back. Reason being for slapping turns. I tend to lose sealant in the back when burping the tire and have ruined plenty of rides that way. Also carry a spare tube when I can. I don’t really race that often, so I don’t get too tech with the setup.”

Handlebars: “Truvativ Kyle Strait Signature. I try to run the same bars on all my bikes, just different lengths. Slope bike, 29 inches; trail bike at 30 inches; and downhill bike at 31 inches wide. The bigger the bike, the wider the bars!”

Grips: “Sensus. Only grips worth running.”

Ryan: With the neighborhood crew on a Ninja Turtle bike.

MBA: Did you race any other bikes before competing on mountain bikes?

Ryan: I raced BMX for a few years, maybe from age 9 to 12. Wasn’t that serious about racing; it was more about riding the track with my buddies. Did pretty well at a few local races but was more concerned with hitting all the jumps and trying to look good doing it!

Ryan: Sea Otter Classic, 2002. My mom signed me up for the XC race and DH. I was so nervous. I didn’t want to make my way to the start line at all for the cross-country race, [but] I did it; couple of slams and a pretty big day on the bike for being 13. I got through it. It was the last XC race I did, because all I cared about was downhill. Even though I probably did terribly, it was the most fun, which kept me coming back! I have never really been a great racer—too stoked on hitting the jumps on the tracks and not that good with fast line choices. I have huge respect for World Cup athletes, and all that goes into racing at such a high level!

Ryan: Winning Whip-Offs at Crankworx Europe and New Zealand. I can’t recall the years I have won the Whip-Offs, but I know it has been three Rotorua titles and one at Les Gets. My goal was to win a Crankworx Whistler Whip-Off, but I think I’m past my prime for that one. So many sick young guns that are so good at getting sideways. Makes me really happy to see the future of whips on a mountain bike!

Ryan: Half semester at junior college, then dropped out to ride.

MBA: What school was it?

Ryan: Cabrillo College. Didn’t take it too seriously, because all I wanted to do was ride!

MBA: Did you earn any awards in sports or academics in school?

Ryan: Second place in the science fair in 6th grade.

MBA: Have you competed in any of them?

Ryan: I’ve done one dirt bike race at Day in the Dirt. Got smoked [laughs]!