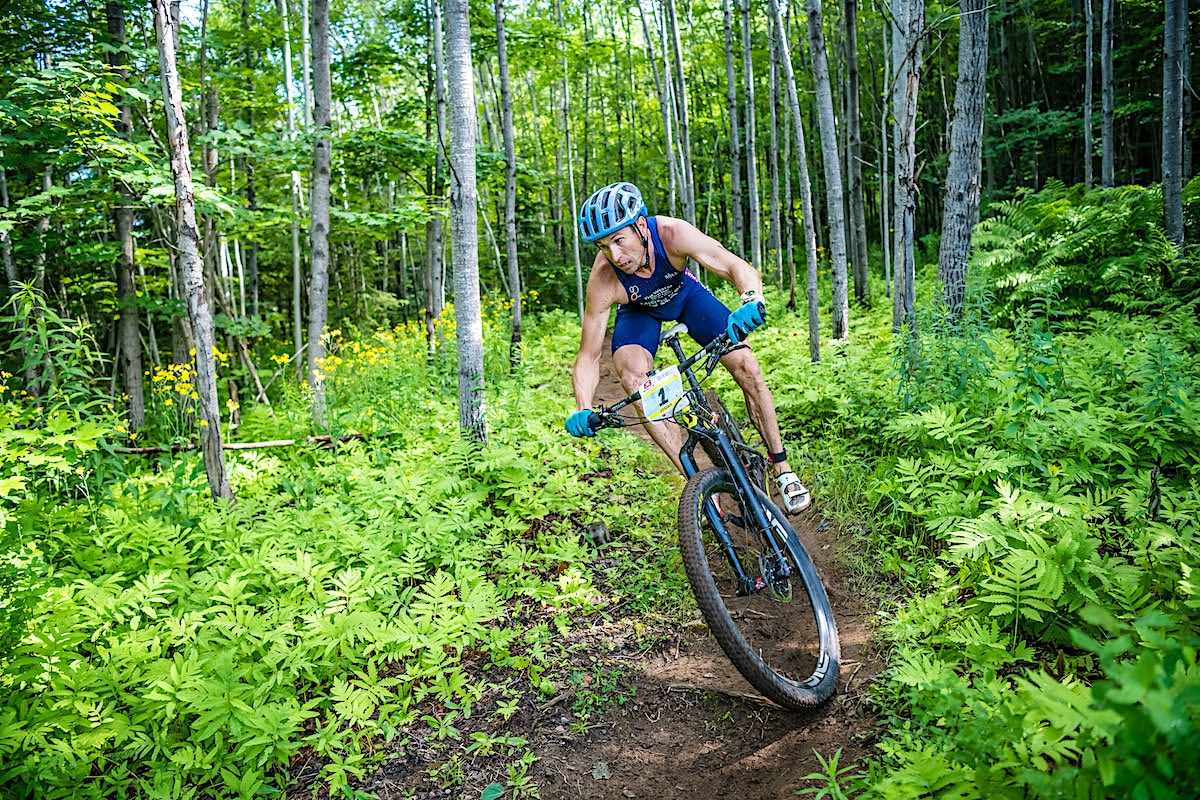 It’s the first win of the season for Middaugh, his second in a row in Quebec, and the 35th major victory of his storied career. For Button, it’s her second XTERRA World Tour win as an elite.

The event started with a 1.5K swim, followed with a grueling 27K mountain bike on epic trails at Empire 47, and finished with a tough 10K trail run.

In the men’s race Middaugh was eighth out of the warm water of Lac Delage, about four minutes behind the swim leaders Edmond Roy and Karsten Madsen, but quickly went to work on the bike, posting the fastest split in each of the three laps, and caught Madsen for the lead just before the bike-to-run transition.

“I’m in a little funk with non-wetsuit swims so gave up more time than I wanted to, but I felt good on the bike and was able to reel everyone back in,” said Middaugh, the reigning XTERRA Pan American Champion. “It’s such a technical course, even more technical than Victoria last week and it featured a lot more up and down. I was able to catch Karsten right at the end of the bike and we ran out of T2 side by side. The run here starts out up a hill and I hit the first climb really hard, and Karsten backed off and from there I just tried to hold the gap.”

Middaugh ended up posting the second-best run time, just a few seconds slower than Matthew Alford who finished sixth, and took the tape in 2:46:18, more than two minutes ahead of Madsen in second. 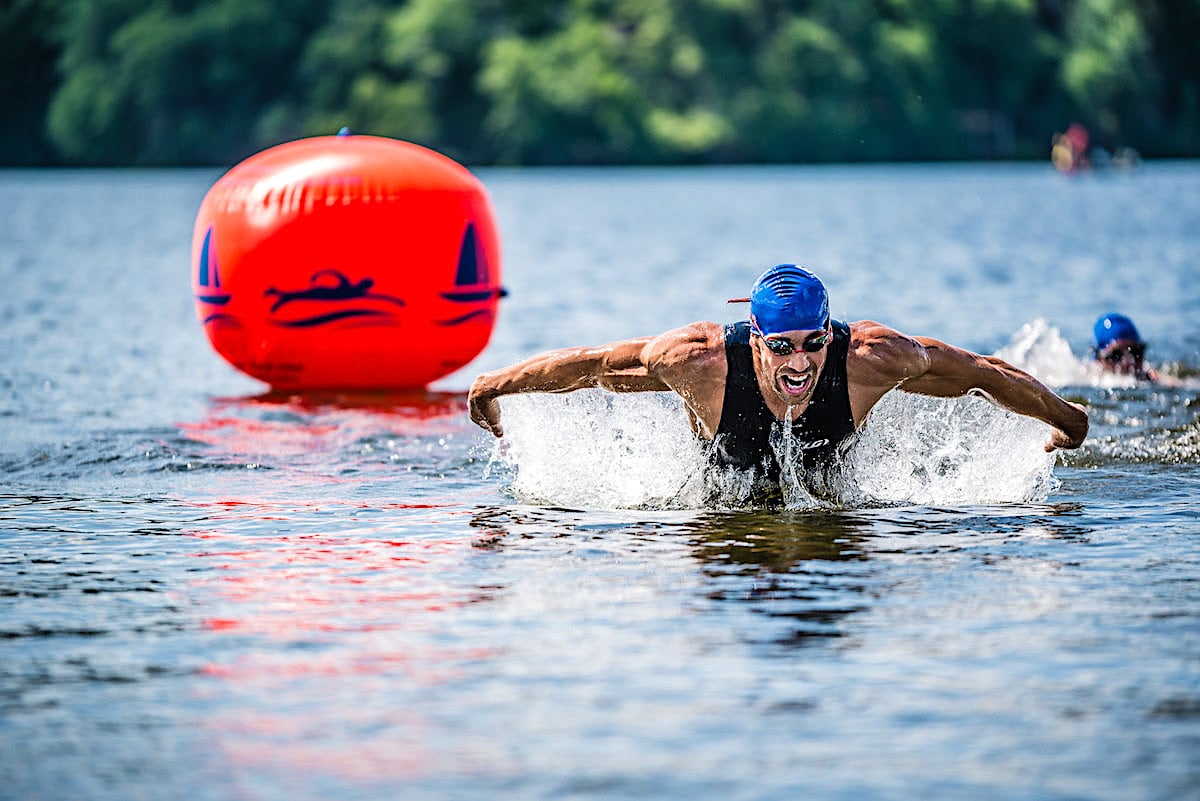 “It feels good to get the first win of the season, and now I’ll head back home and see if I can defend the home turf at XTERRA Beaver Creek on Saturday,” said Middaugh.

As for Madsen, he went all out from the gun to see if he could swim and ride away from Middaugh.

“I went after it today,” said Madsen. “I wanted to put as much time on Josiah in the non-wetsuit swim as possible. On the bike I knew I would lose some time to him, but I felt I was riding the downs really good. On the third lap I made a mental mistake and crashed hard over the bars and my face took most of the impact. I collected myself and got going again when Josiah came by me like a freight train. We came into T2 together, but I was running hurt. Racing full out to try and win is risky and today I found myself on the ground but, I’m happy I took my shot it. Honestly, every race and training session my heart does what it should, is building confidence again in my mind.”

Will Ross had arguably his best race as an elite to finish third, just two minutes back of Madsen and four-minutes off the pace set by Middaugh. Edmond Roy finished fourth and Branden Rakita rounded out the top five. 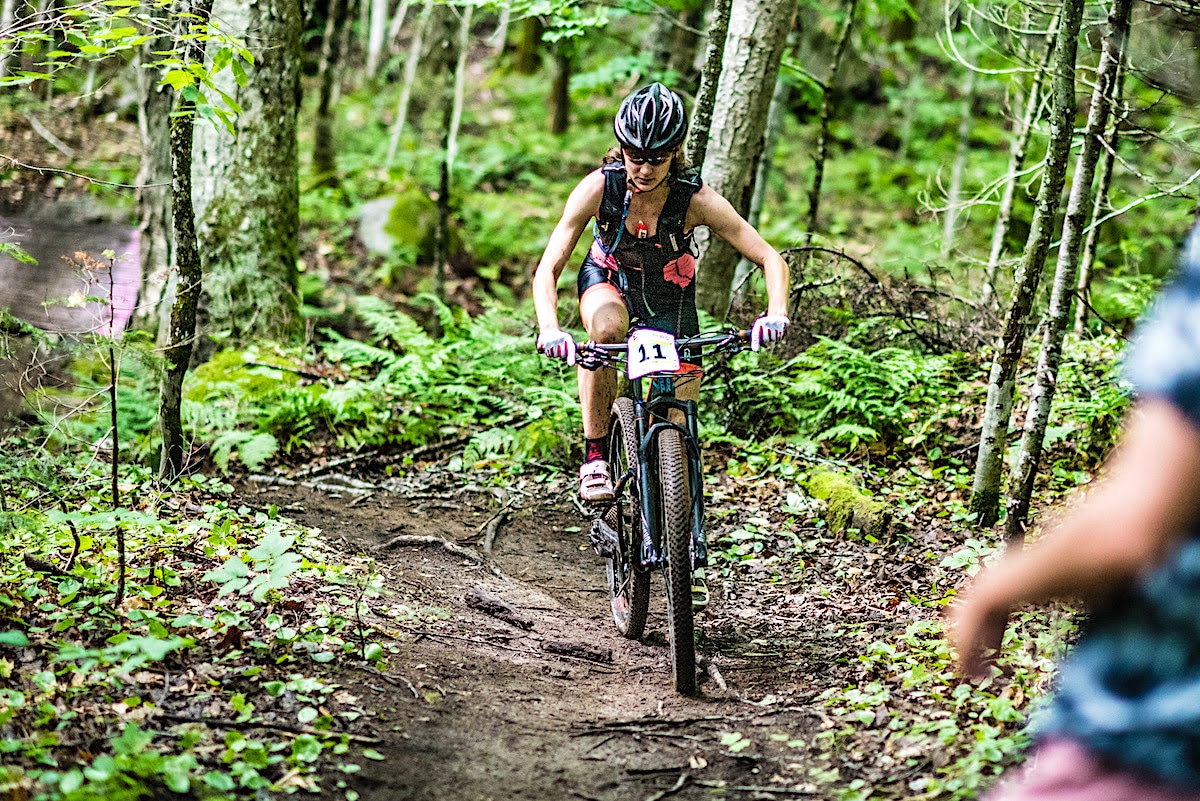 In the women’s race Button was second out of the water, just six seconds behind Kelli Montgomery, then turned on the jets on the bike, posting the fastest split in 1:52:04, which was more than 10-minutes faster than the second-best time put up by Deanna McCurdy.

“It was smooth sailing for me today,” exclaimed Button. “I passed Kelli coming out of the swim-to-bike transition and was able to stick to my plan of riding strong and smooth with no mistakes (ok I put my foot down a couple times). The longer and relentless bike course here really spread everyone out, so I lost track of the rest of the girls.”

Once on the run, Button was out of sight and simply needed to survive the punishing 10K course and her winning time of 3:24:07 was more than 14-minutes ahead of McCurdy in second.

“On the run I finally started noticing last weekend’s race legs, and it didn’t feel awesome,” said Button. “That was a challenging one, super techy up and down – so I might have felt just as rough even if I hadn’t raced in Victoria last weekend. Overall, such a great event – so much effort by the race organizers to make sure everyone has a great day. Just a big day of crushing some great trails!”

Behind Button, McCurdy was busy posting the fastest run split of the day to finish in second, five minutes ahead of Montgomery in third. Amanda Bayer placed fourth and Laura Mira from Brazil finished in fifth. 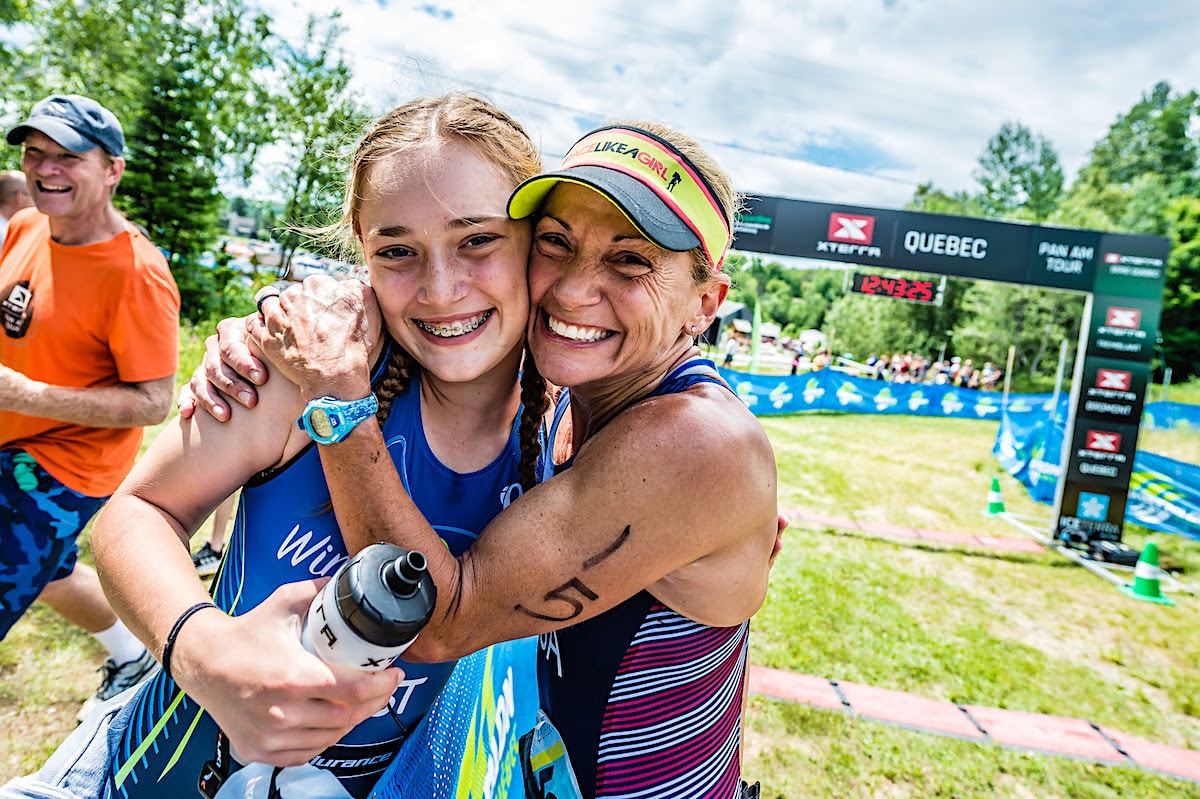 XTERRA Quebec was the sixth of 10 races on the 2019 XTERRA Pan American Tour. Elites count their best six scores of the season, including what they get (or don’t get) at the Pan Am Championship race which will be held September 7 in Ogden, Utah. Up next, XTERRA Beaver Creek in Avon, Colorado on July 20. 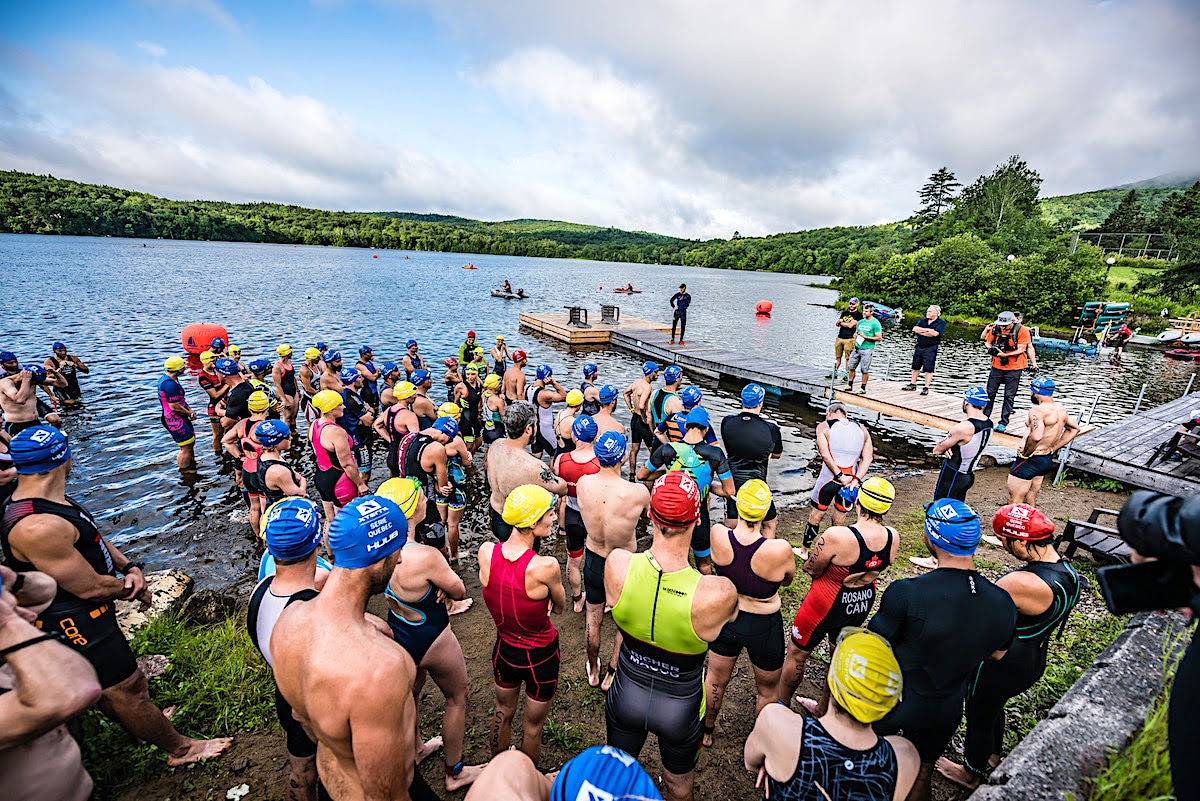 While this was the sixth edition of XTERRA Quebec, it’s just the second year the race has been designated as an XTERRA World Tour major. As such, it provided a chance for amateur athletes in the region to secure one of the 26 qualifying spots into XTERRA Worlds (one for every age group champion). Xavier Plouffe and Arianne Carrier won the overall amateur titles today.

The event was also part of the new XTERRA Quebec Series, which includes XTERRA Bromont and XTERRA Tremblant, and the Series winners also qualify for XTERRA Worlds.

XTERRA Quebec was was the 20th of 37 races around the world where amateur athletes could qualify for XTERRA Worlds. 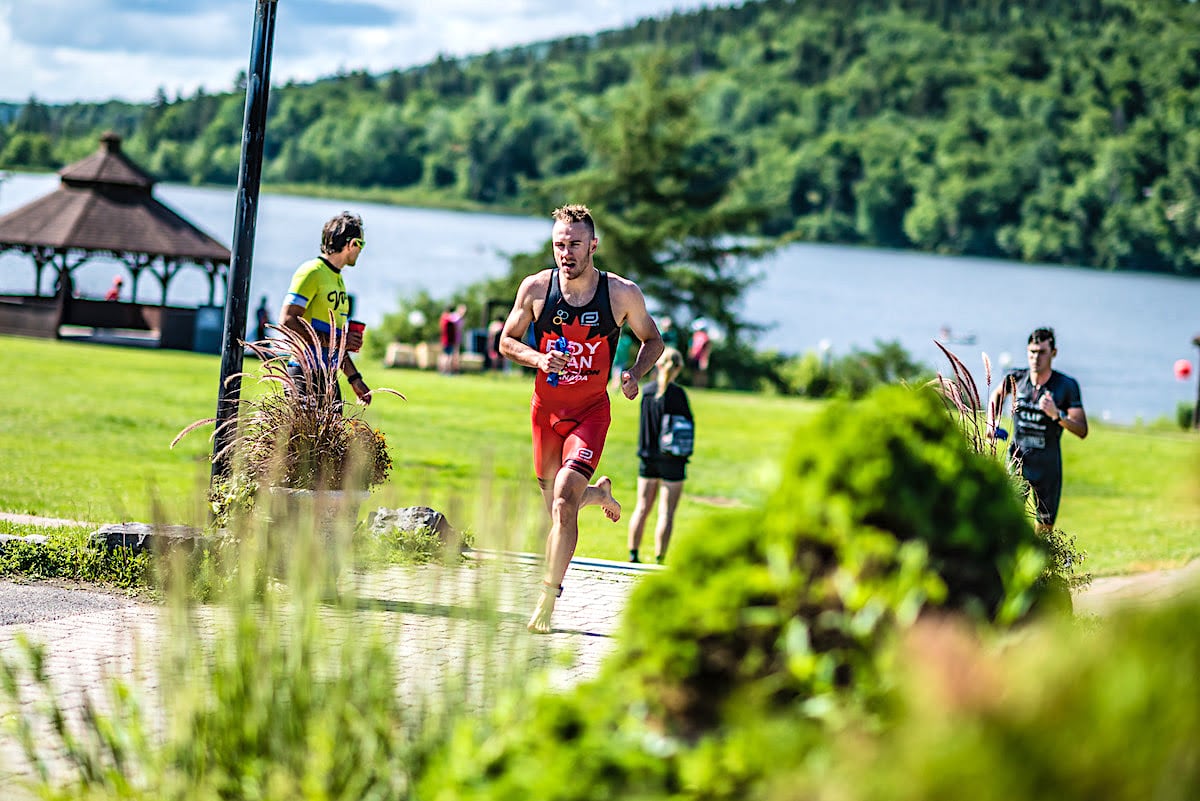 Round up your family at Ruby’s Inn