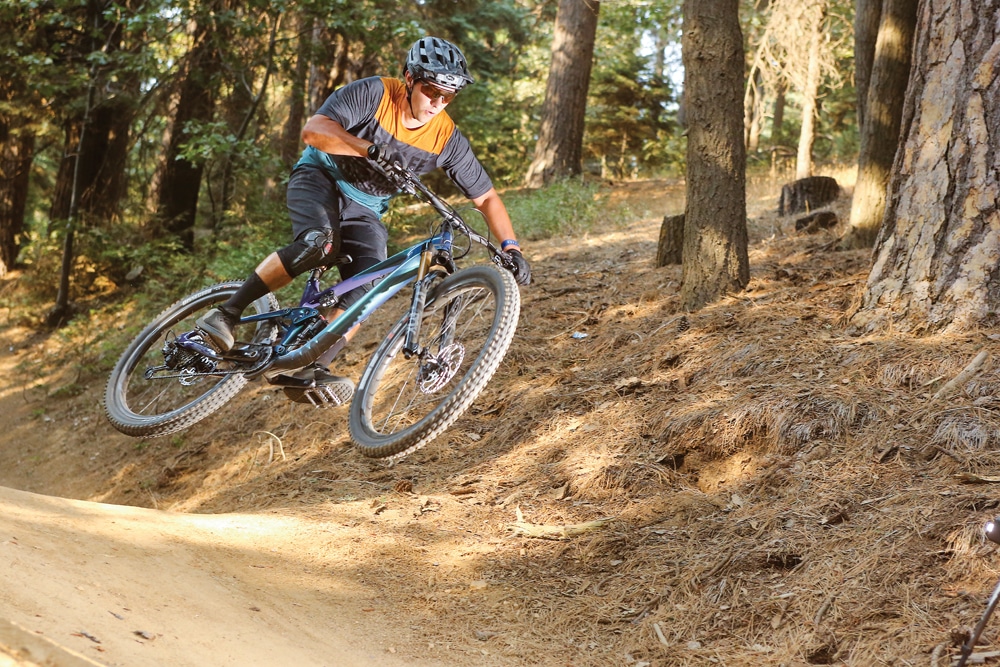 The Trance X Advanced is made to handle any terrain from flow trails to technical singletracks.

The Trance is Giant’s go-to, do-it-all trail bike designed with balance and performance in mind. Heading into the 2021 model year, Giant increased suspension travel, advanced its composite engineering and added a flip-chip for a fine-tunable ride. This month, we had the honor and the pleasure of riding the all-new Trance a few weeks before its release date. This well-rounded rig wasn’t easy to keep under wraps, so with great pleasure, we bring you Giant’s latest version of its classic trail bike. 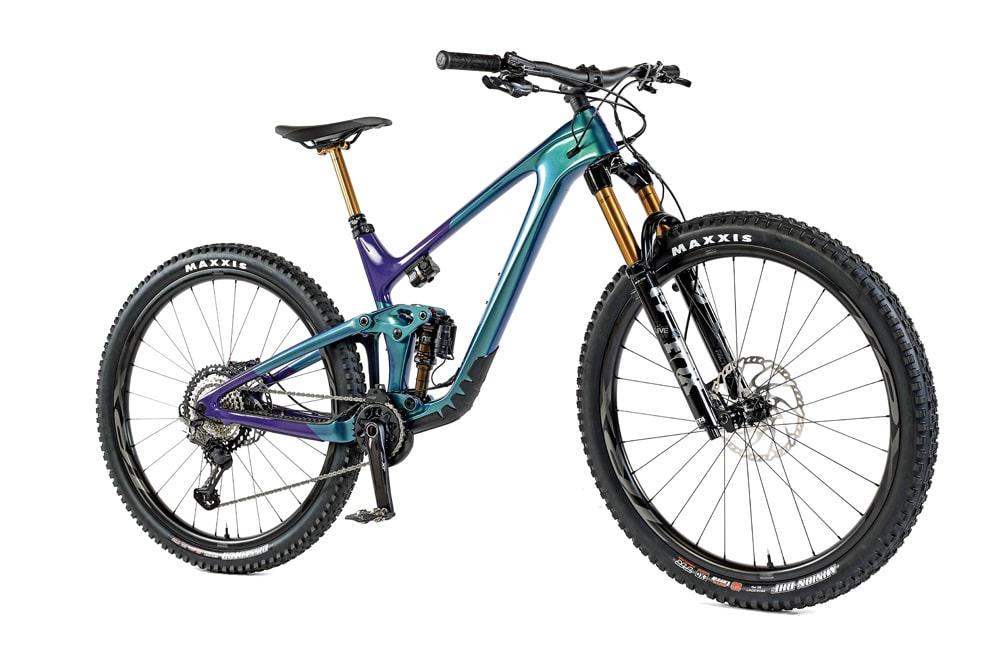 Teasing the launch of the Trance X Advanced Pro was the early launch of Giant’s alloy Trance X with a similar design; however, the composite frame is claimed to be 25-percent lighter than its alloy counterpart. The frame is carbon throughout, including the front and rear triangles and the rocker link. The new carbon rocker includes a pair of flip chips, allowing geometry adjustments to the head tube angle, seat tube angle, and bottom-bracket height. The lower and slacker option is best for steep chutes and fast descents, while the higher and steeper setting is ideal for tight trails where quick maneuverability is needed. 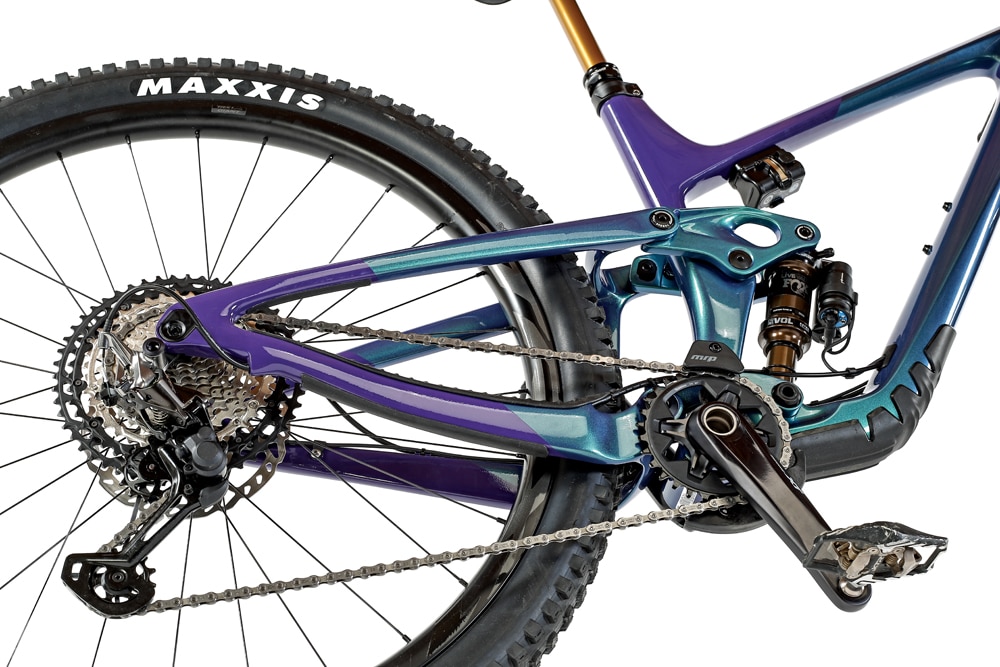 The Trance X Advanced Pro 0 is the top-of-the-line model from Giant, demanding a price of $8500. Meanwhile, the Trance X Advanced Pro 2 starts at $4300. Our elite test mule came with top-notch components, including a Fox 36 Factory fork and Float DPX2 Factory shock, both offering Fox Live Valve electronically tuned suspension. Giant then spec’d a Shimano XT 12-speed drivetrain along with an XTR rear derailleur. House brand parts make up the rest of the build, including the cockpit, wheels and saddle. 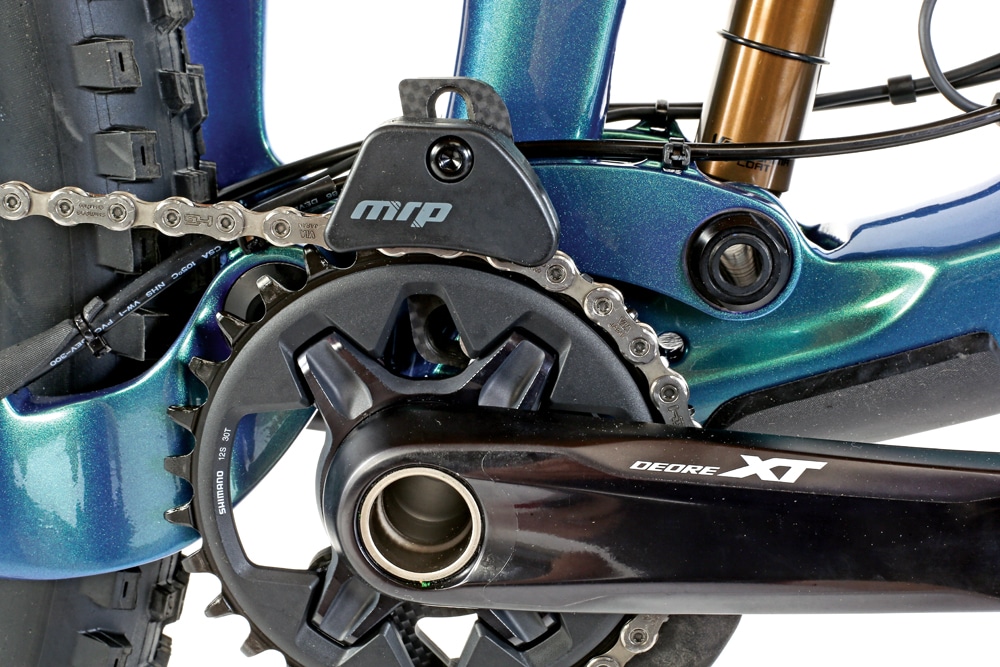 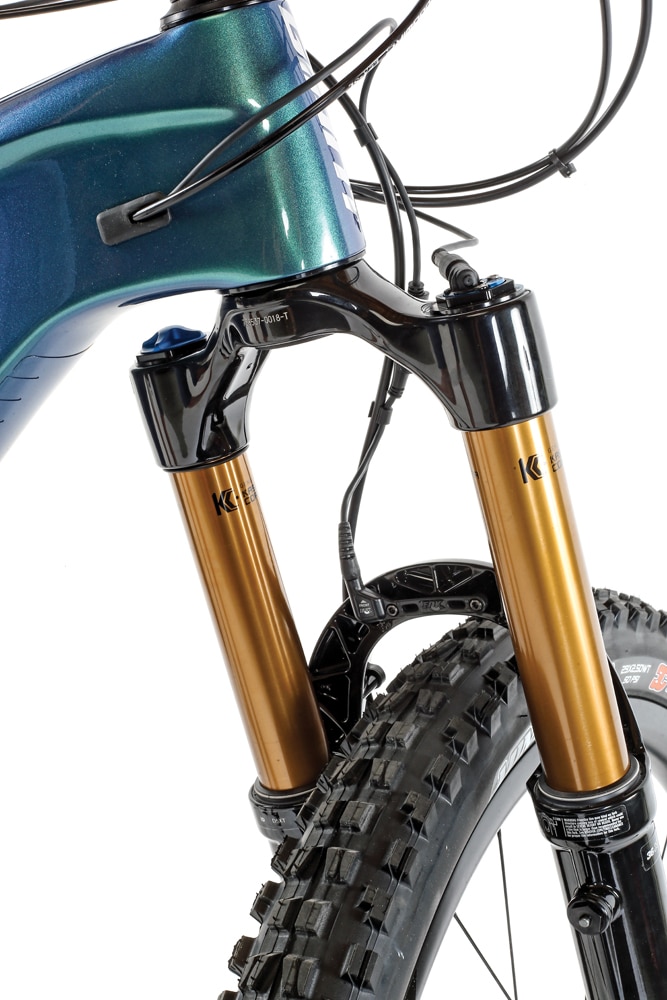 Giant bumped the travel up by 20mm, now supplying riders with 135mm of Maestro suspension. In front, Giant paired the increased rear travel with a 150mm Fox Factory 36 fork. The goal for the new suspension platform was to keep it familiar for current Giant riders while adding a plusher ride with a lower center of gravity and a front-to-rear balance. Giant also wanted to add better absorption during bigger hits while retaining suppleness over smaller bumps. 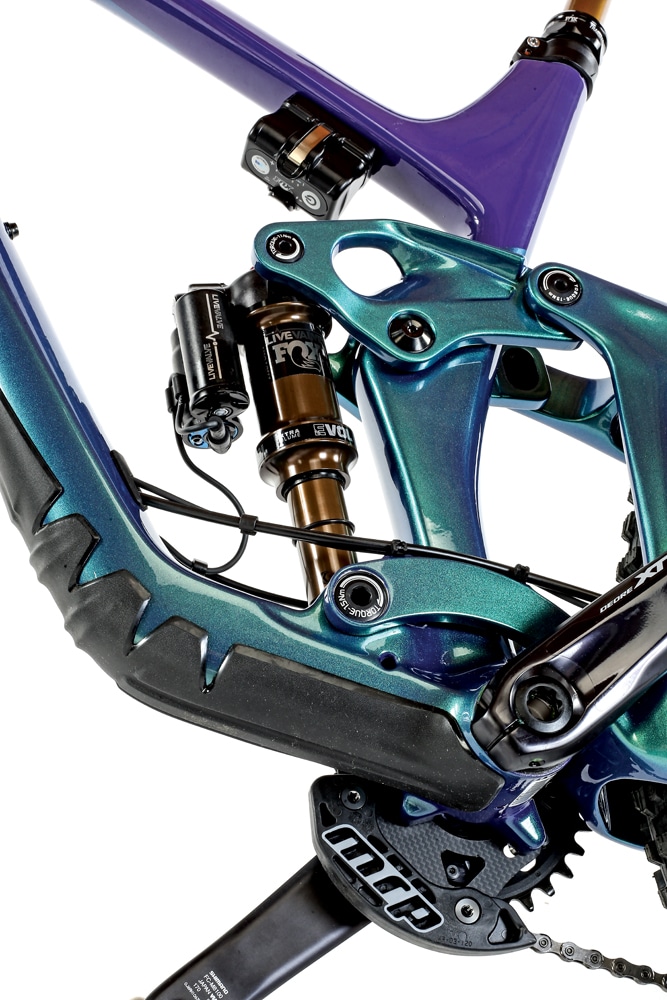 Full downtube protection and a bash guard keep the Giant safe out on the trails. 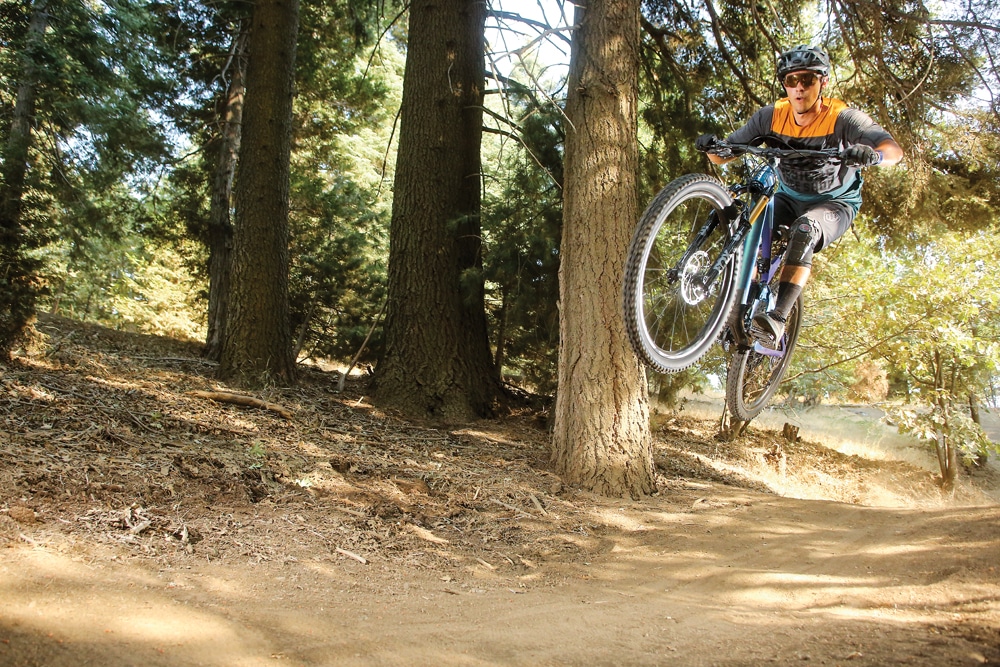 Fox Live Valve suspension takes Giant’s Maestro suspension to the next level with its electronically tuned technology. Giant’s Trance is as comfortable in the air as it is going down a rock garden.

The Giant Trance may have gotten a little bigger and more downhill focused, but it’s still a well-rounded tool built to conquer every section of the trail. From long days in the saddle to shuttle runs with buddies, the new Trance will shine under any conditions. 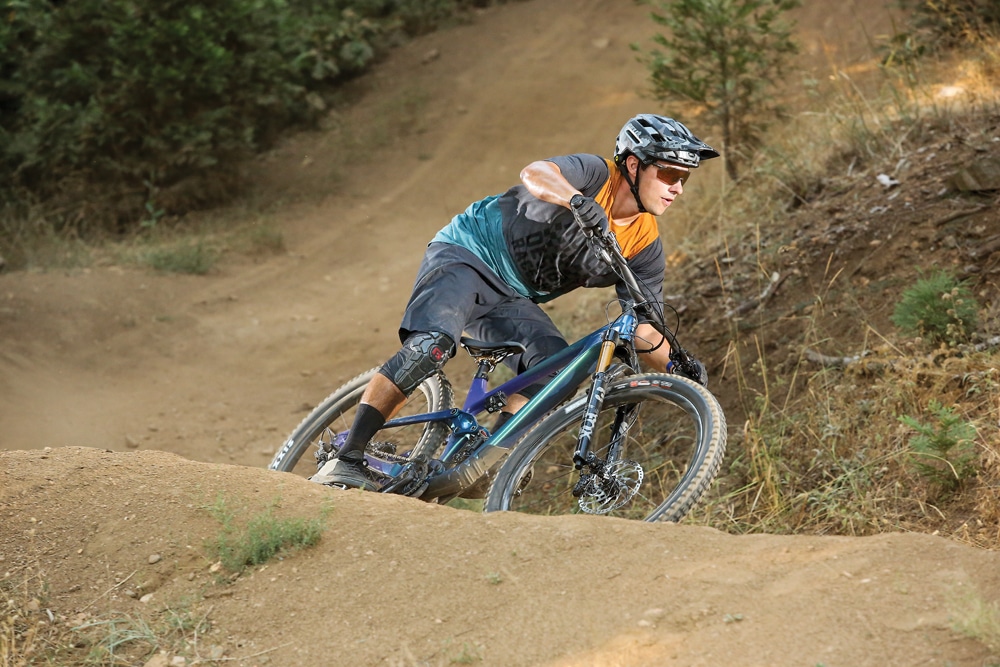 Fox Live Value is something we hope to see on as many bikes as possible in the near future. This electronically controlled suspension system provided a firm pedaling platform while we were heading up the trails and opened up as soon as we turned around and pointed our bike downhill. To put the new Trance to the ultimate test, we turned the Live Valve system off, leaving our bike’s suspension in a fully open and plush setting.

Even with the system turned off, we were quite surprised by the Trance’s ability to grab traction and propel us up the trail. Of course, turning the system back on provided further climbing assistance, but we can easily say the new Trance (in its less expensive trim) shouldn’t have any issues bringing riders to the top of the trail. 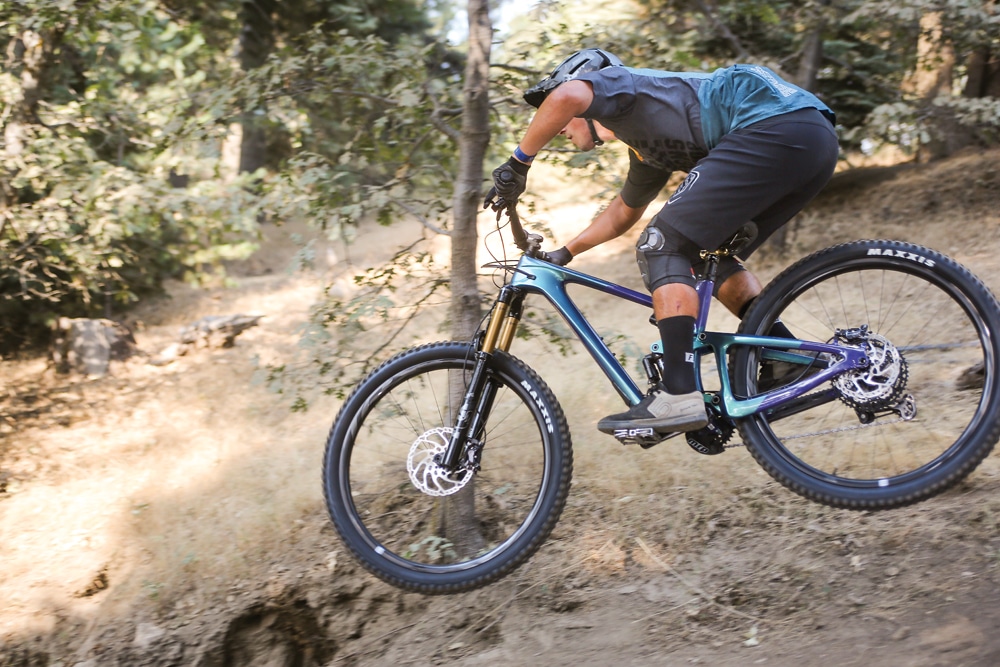 The Trance offers a balanced feeling which allows riders to gracefully glide down the trails.

Giant’s latest changes to the Trance give it more suspension travel along with a more downhill-focused geometry. While the bike isn’t quite as capable as its bigger brother the Reign, it is comfortable in both bike park settings with flow trails and on trail rides with chunky rock gardens. Compared to last year’s Trance, the new model is faster and more controlled as the trails point down. Another nice addition from last year’s frame is the new pair of flip chips that allow riders to fine-tune how they want their bike to ride. For our big climbs and long descents, we opted for the lower and slacker setting, which provided us with a great feel at high speeds. East Coast mountain bikers who ride tight, rolling terrain will likely find the higher and steeper setting better suited to their environment. 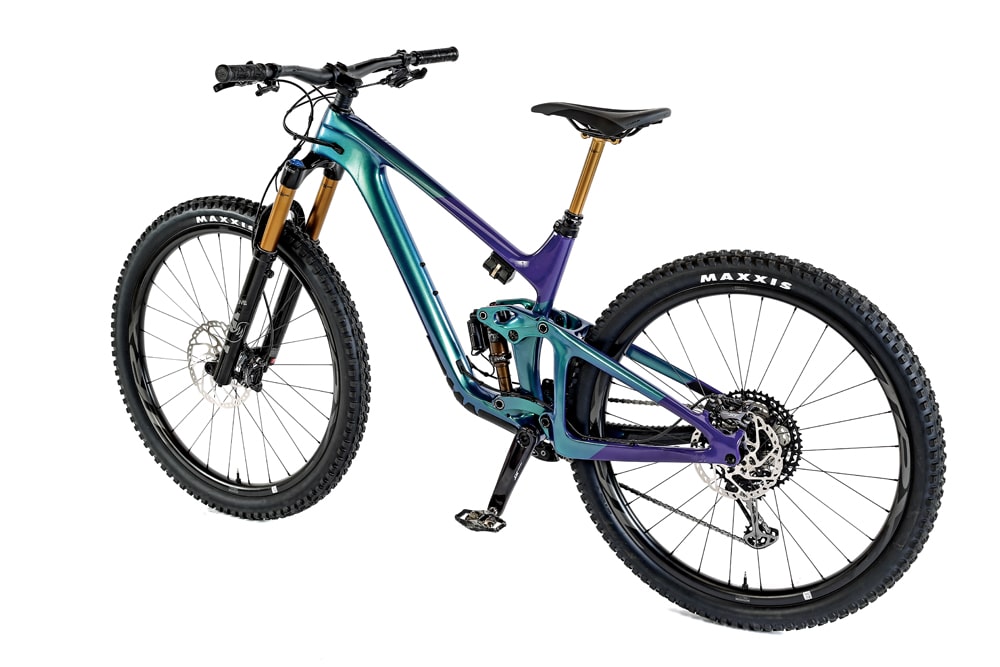 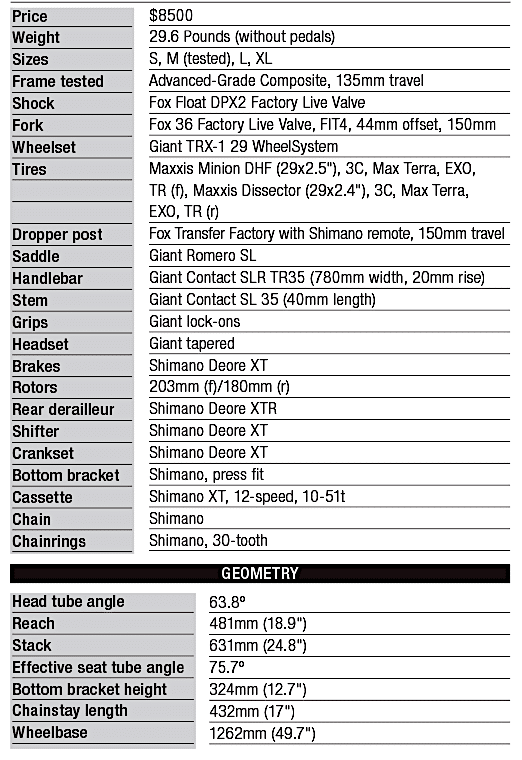 At the very top level, the Trance offers everything you need and more. That said, some riders may see the house brand parts as a way for Giant to keep it all in the family. Swapping the cockpit or other parts to an aftermarket company could provide better comfort and give your bike a more custom look. But, don’t get us wrong. We had no complaints with the parts that came spec’d on our top-of-the-line Trance model.

The Trance has long been the happy medium in Giant’s lineup, splitting the difference between the short-travel Anthem and long travel Reign. Sure, the new Trance has more travel than before; however, that doesn’t hinder its climbing performance, and it only helps its ability to fly down the trails. If a rider is looking to find a bike ready to tackle every type of trail, the Trance is hard to beat.