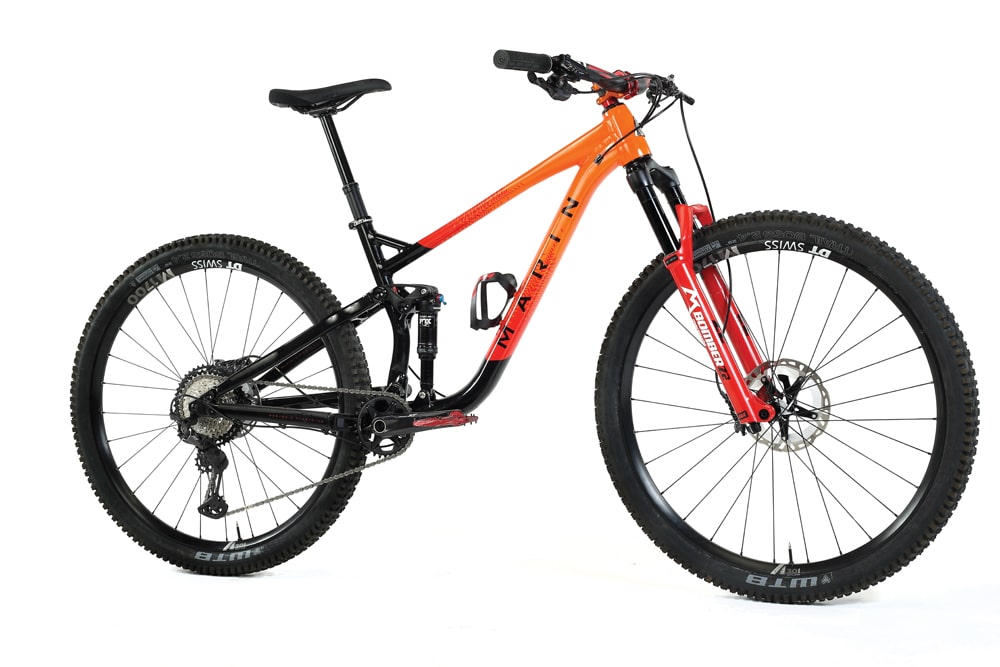 The question has long been asked whether a rider should purchase a carbon frame with cheaper components or an aluminum frame with high-end components. We set out to see what an aluminum-framed bike would ride like when built with a quality set of parts. You may remember our Marin Rift Zone Carbon test from our March 2020 issue. You may also recall this alloy bike graced the cover of that same issue, and there was a quick breakdown of its parts inside. Well, now it’s time to hear our final thoughts—months after our tires hit the dirt. Here’s the full breakdown on our custom-built Marin Rift Zone 3.

Our aluminum Rift Zone features an identical geometry to its carbon sibling and has the same amount of suspension travel. Marin focused on new-school geometry, giving the bike a slack head tube angle, long reach for the frame size and short chainstays. Other frame features include a 73mm threaded bottom bracket, Boost hub spacing, internal cable routing and an ISCG05 mount, should you want to attach a chainguide or bash guard. While the carbon frame has downtube protection, the aluminum model is exposed to rocks or other trail debris. That said, riders should have no problem finding aftermarket protection products to keep this modern-day shredder looking fresh.

Our custom build started off with a complete Shimano XT 12-speed drivetrain, including a close-ratio 10-45-tooth cassette with a 32-tooth chainring. We then added a pair of four-piston Shimano XT brakes with a 180mm rotor up front and a 160mm rotor in back. Initially, we installed a 180mm rear rotor using a spacer, but found the smaller rotor offered more than enough power, rendering the larger rotor unnecessary. Next, we used DT Swiss M1700 wheels, which offered a nice balance of value and performance.

Our wheels were wrapped in WTB rubber and had Orange Seal sealant inside. Our cockpit featured a Deity Skywire carbon bar, along with Industry Nine’s A35 stem. A OneUp dropper post with 150mm of travel was placed on the bike, along with a WIB Volt saddle. Last but not least, we placed a Marzocchi Bomber Z2 fork on this bike and opted for the flashier red color option. 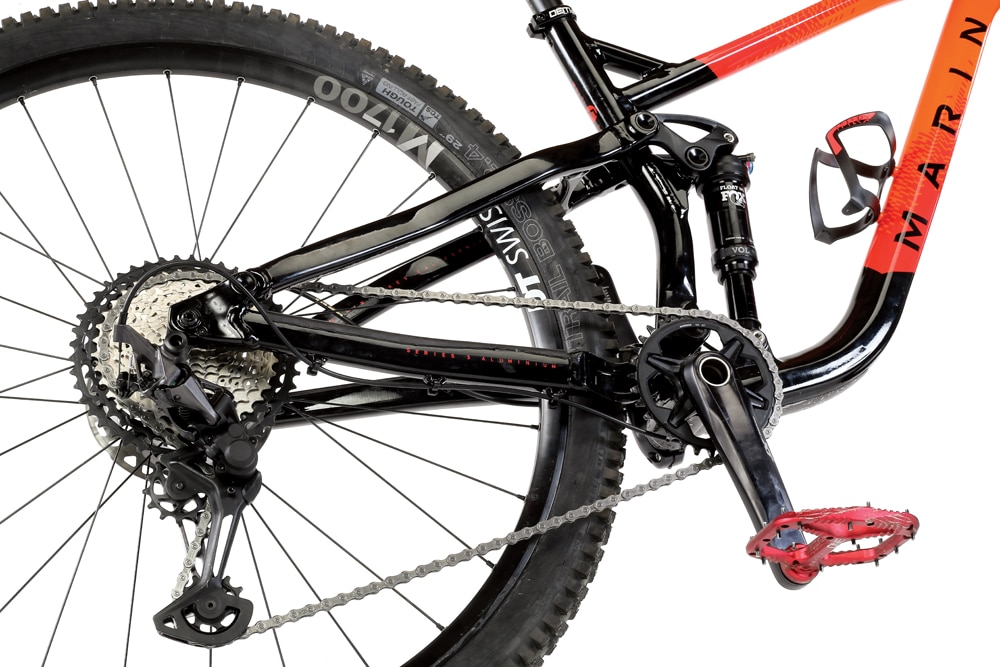 Marin’s MultiTrac suspension platform is a single-pivot design that delivers 125mm of travel to all Rift Zone models. We stuck with the Fox Float DPS Performance Series shock that came with our frame and set it at 30-percent sag (15mm). Next, we set the sag on our Bomber fork with 130mm of travel to 20-percent sag. Riders looking for help setting up their suspension can find recommended air-pressure settings for their shock on Marin’s website and for their fork on the back of the lower fork leg. 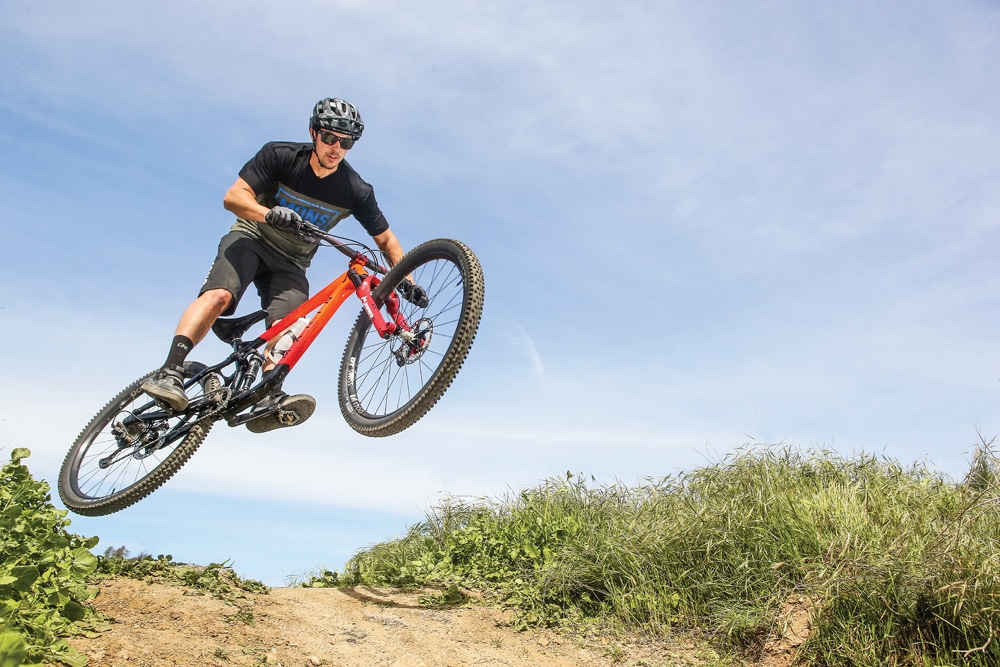 Marin displays the logo “Made for fun” on the linkage, and it proves true once you hit the trails. This short-travel trail bike is all about slashing around corners, hopping off trail features and blasting high-speed sections of trail. Its long reach and slack head tube angle provide confidence at high speeds, while its short chainstays add playfulness to the rear end.

The Rift Zone in its aluminum trim is far from a lightweight bike, but it’s not one to shy away from a long climb. During technical climbing, the Rift Zone provides traction and powers up the trails with efficiency. On smoother climbs, we appreciated the three-position compression switch on the shock. Overall, the Rift Zone isn’t one to wow you on the climbs, but it’s sure to get you to the top, ready to take on the downhills. 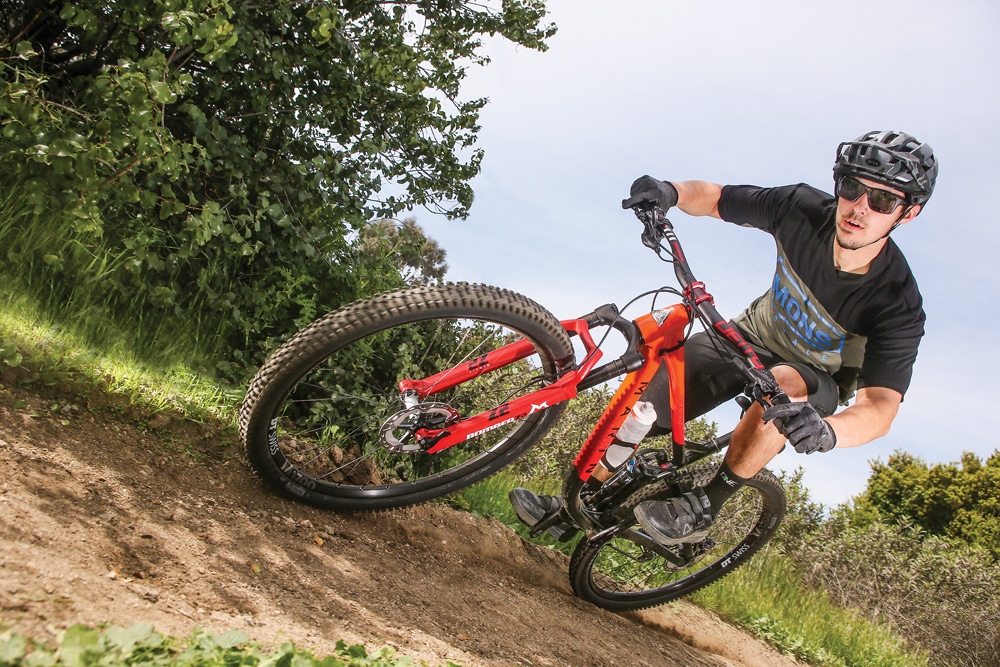 Laying into corners is made easy with the ground-hugging traction of WTB tires.

Marin put its best foot forward with the Rift Zone’s geometry, making it feel immediately comfortable once the trails point down. Riders who live for long, slack and low bikes will find the Rift Zone a perfect fit. It tracks through corners with ease and isn’t scared of straight-lining a rough section of trail. That said, our rear shock required us to add a volume spacer to prevent harsh bottom-outs. The shock rides near the middle of its travel on most trails, but large drops or jumps to flat quickly reveal its bottom-out bumper. That said, the Rift Zone soaks up small bumps with ease, offering a comfortable ride over chattery trails. 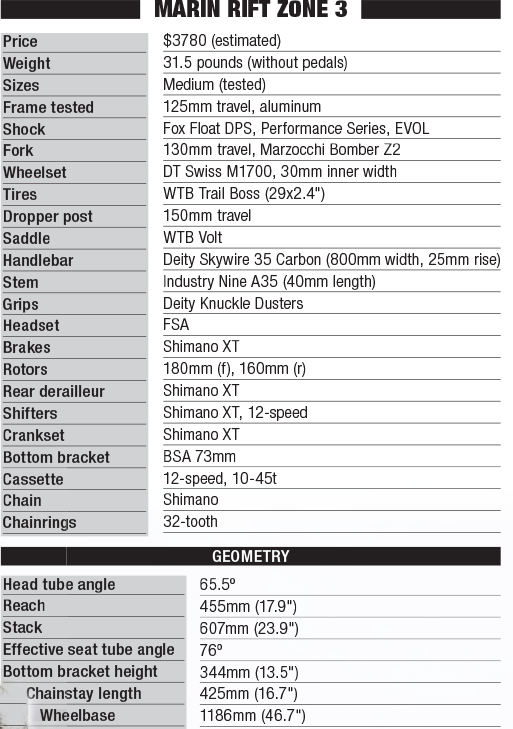 The first thing we would add to our bike would be downtube protection. While we’re sure the frame is burly enough to handle the abuse, the paint is what we would worry about most. Riders should look into rubberized guards or vinyl graphics to protect their frame before they find a large chip in the paint caused by normal off-road riding. The next thing we would recommend is suspension tuning to get the most performance possible out of this machine. Considering the Rift Zone’s dialed geometry, properly tuned suspension components would take this bike to the next level.

After plenty of time riding our aluminum Rift Zone and comparing it to its carbon sibling, it has been hard to pick a favorite. The Rift Zone Carbon weighs less, of course, making it feel a bit peppier on the climbs; however, there’s something about having a bike set up just the way you want it. At the end of the day, we were quite surprised how much performance we were able to extract from an aluminum frame with high-end parts versus a carbon frame with mid-level ones.

Parks and Recreation Force Police to Shut Down Mountain Bike Event in Fontana,…