The SB150 is the purest distillation of Yeti’s race heritage. It’s a bike designed with years of experience on the racetrack learning how to build bikes for unbridled speed. While the racetrack is where the SB150 was designed to live, let’s not forget that Yeti is also arguably the purest example of a bike company run by riders for riders. Yeti’s approach to bike design is the antithesis of corporate. These guys actually ride.

Stop by the Yeti factory between the hours of 11 a.m. and 1 p.m. and you will find it empty. Yeti closes up shop every single day to test its creations on dirt during the daily lunch ride. It’s been said that while the lunch ride is not mandatory for employees if you skip it often, you won’t last long at Yeti. They want the best bikes for riders who spend much of their time racing the clock between the tape, but the bikes have to work for mortal riders, too. We set out to take one of these capable race sleds to our local trails to see if it could make us feel like we were hunting for EWS gold right in our backyard. 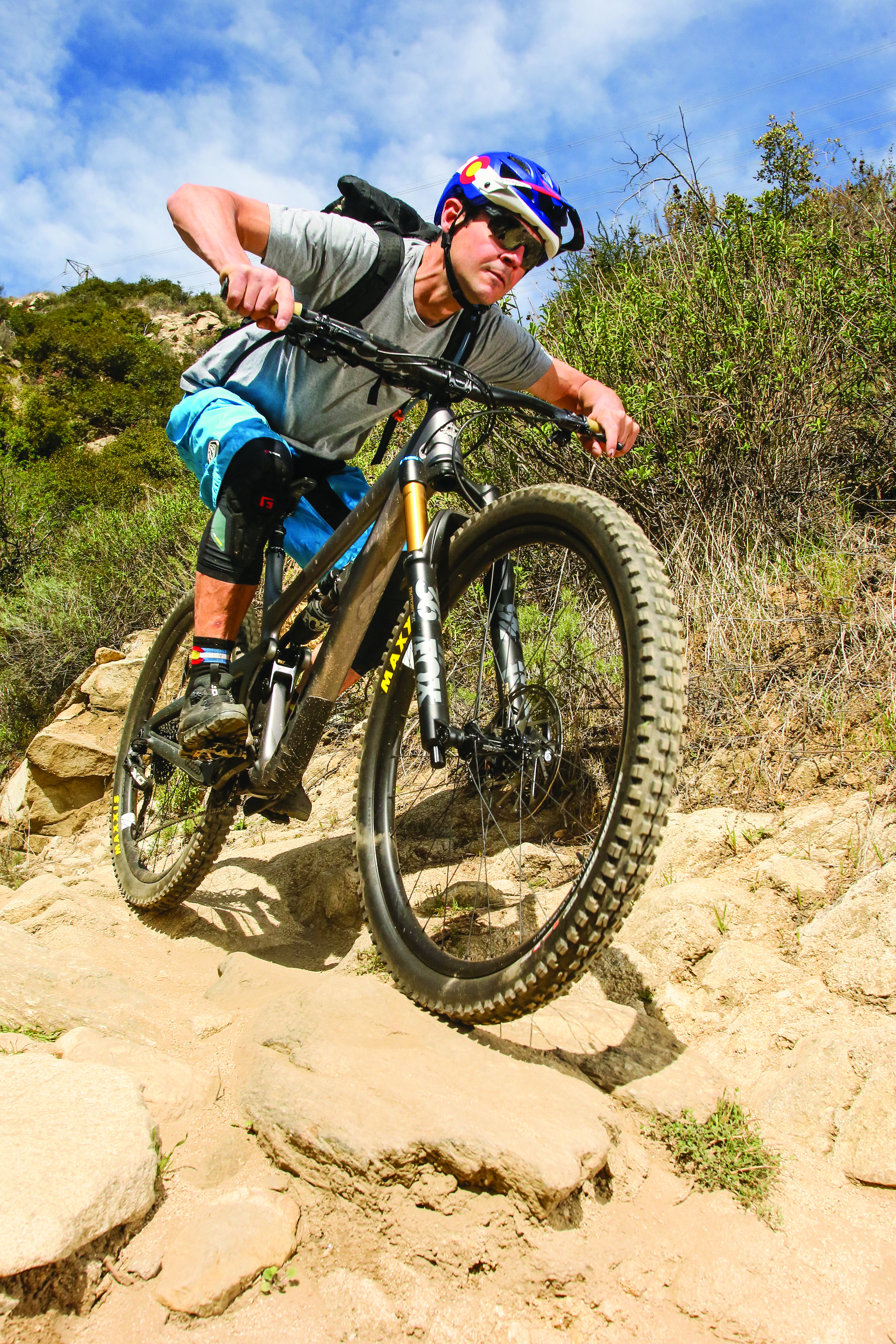 The SB150 is designed as an enduro race bike first, but that race-ready attitude makes for a seriously mean trail machine in the hands of a capable rider. While the aggressive geometry might feel too sluggish and sled-like at slow speeds for some, those with the power and skills to harness this beast will reap the benefits on a wide range of terrain. Yeti makes a complete line of superbikes, several of which are lighter and more nimble than the SB150. If you’re interested in this one, you should know that it makes no apologies about its aggressive nature and begs those who want something smaller to look at the shorter-travel SB130 or the smaller 27.5-inch-wheeled SB140.

Yeti builds its carbon in two different versions to hit two distinct price points. The Turq model featured here uses the most advanced low-void carbon fiber to keep weight low and performance high. For those who want a less expensive version of this bike, Yeti also builds it in a C-version that uses the exact same geometry and suspension design, but without the fancy raw carbon material. The Turq version saves about 225 grams, or about a 1/2 pound over the C. It is also a couple of hundred dollars less expensive, but comes with the exact same geometry, suspension design and aesthetics. Both the Turq and C frames are carbon fiber front to back, with 150mm (5.9 inches) of travel in the rear and 170mm (6.5 inches) upfront. The bike uses oversized Enduro Max bearings at all pivot points, a bolt-on ISCG mount, a tapered head tube, a 12×148-mm non-boost axle, enough tire clearance to run a 2.5-inch tire, and custom chain-slap protectors on the chain- and seatstays. 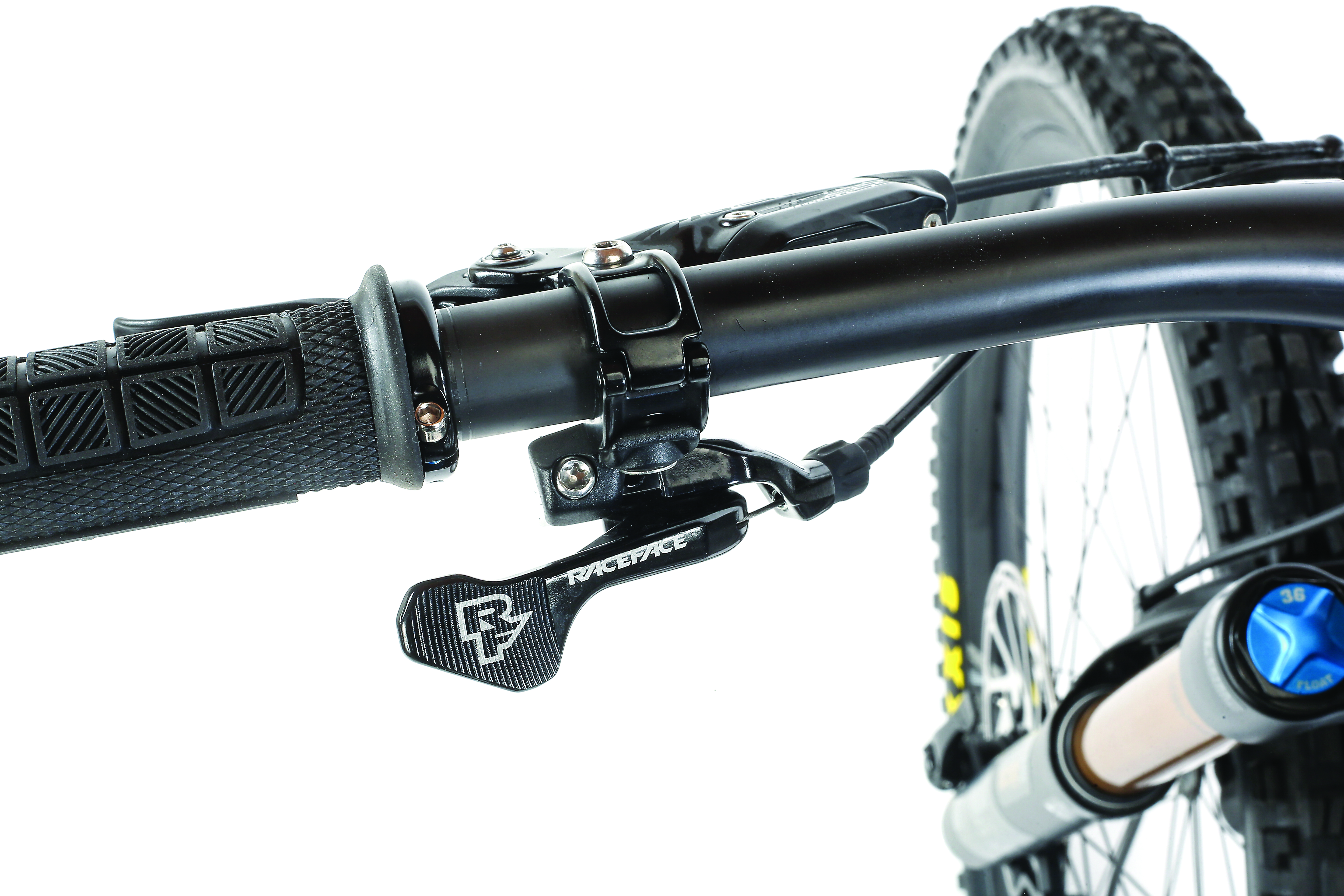 The cable routing is internal, the head tube is tapered and the bottom bracket is pressed in. The geometry is very modern with a long reach, steep seat angle and short offset fork in mind. The Yeti SB150 is a seriously mean trail machine.

Yeti’s build kits have to stand up to the daily lunch ride, so they don’t come with any disposable parts or components that must be swapped out before your first ride. Our SB150 came equipped with a SRAM X01 drivetrain and SRAM Code RSC brakes, which provided reliable and sharp shifting and good braking control. The suspension duties are handled by Fox’s top-shelf Factory 36 Float fork and Factory Float X2 shock, a combo that offers plenty of adjustability and plush travel. DT Swiss’ workhorse M1700 aluminum wheels round out the components with relatively lightweight hoops mated to the bulletproof star-ratchet hub system. Of course, you could upgrade some parts, but you certainly don’t have to. The extra chambers located near the bottom bracket function as a precise “translating pivot” developed by Yeti in conjunction with Fox to create a simpler and more reliable version of the wildly successful Superbike suspension used on the other SB models of the past decade. The system essentially replaces a pivot and allows the designers to closely control the wheel path as the bike moves through its travel. While the Kashima coatings and Fox branding might lead you to believe it’s a secondary shock, it’s not. There is no pressure in either of the chambers, and the link works much like a regular suspension pivot does, only floating. As the bike moves through the first bit of its travel, the Switch eccentric system moves upward, allowing for a rearward axle path that’s great for small-bump compliance and pedaling efficiency. As the suspension moves deeper into its travel, the link switches direction, moving downward to reduce chain tension and allowing for big-hit control. 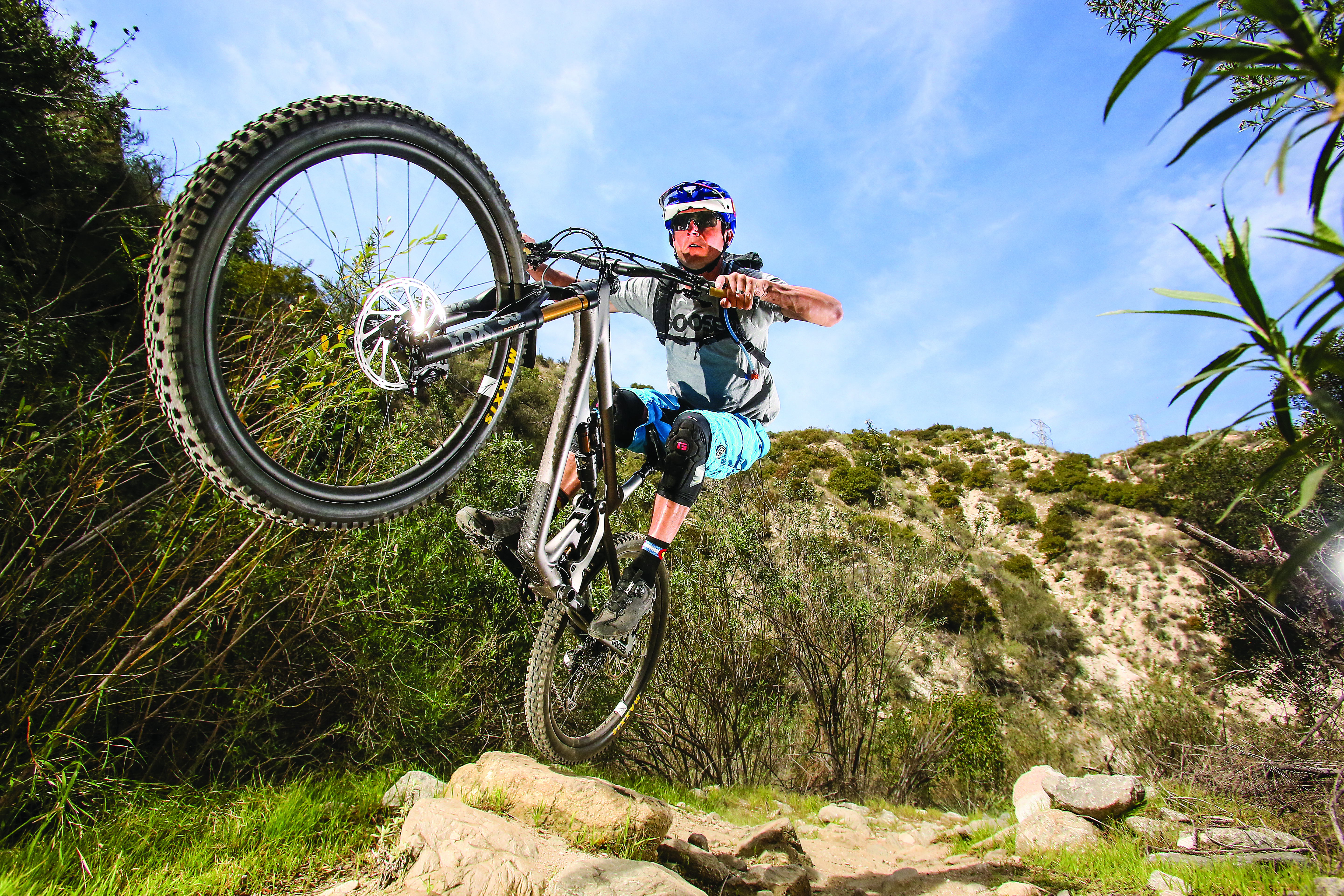 The SB150 is a big bike—no question about it. Most riders will find the “T-shirt” sizing to fit larger than most brands, so if you’re between sizes with other brands, you should likely size down on the SB150. Our size-XL test bike came equipped with a very-long 25.7-inch top tube, which fit our tallest test riders so well they were left questioning all their previous bike-size choices. The long and low feeling of the Yeti, coupled with the steep seat angle, puts the rider in a very powerful feeling position with a very balanced weight distribution. Nice. 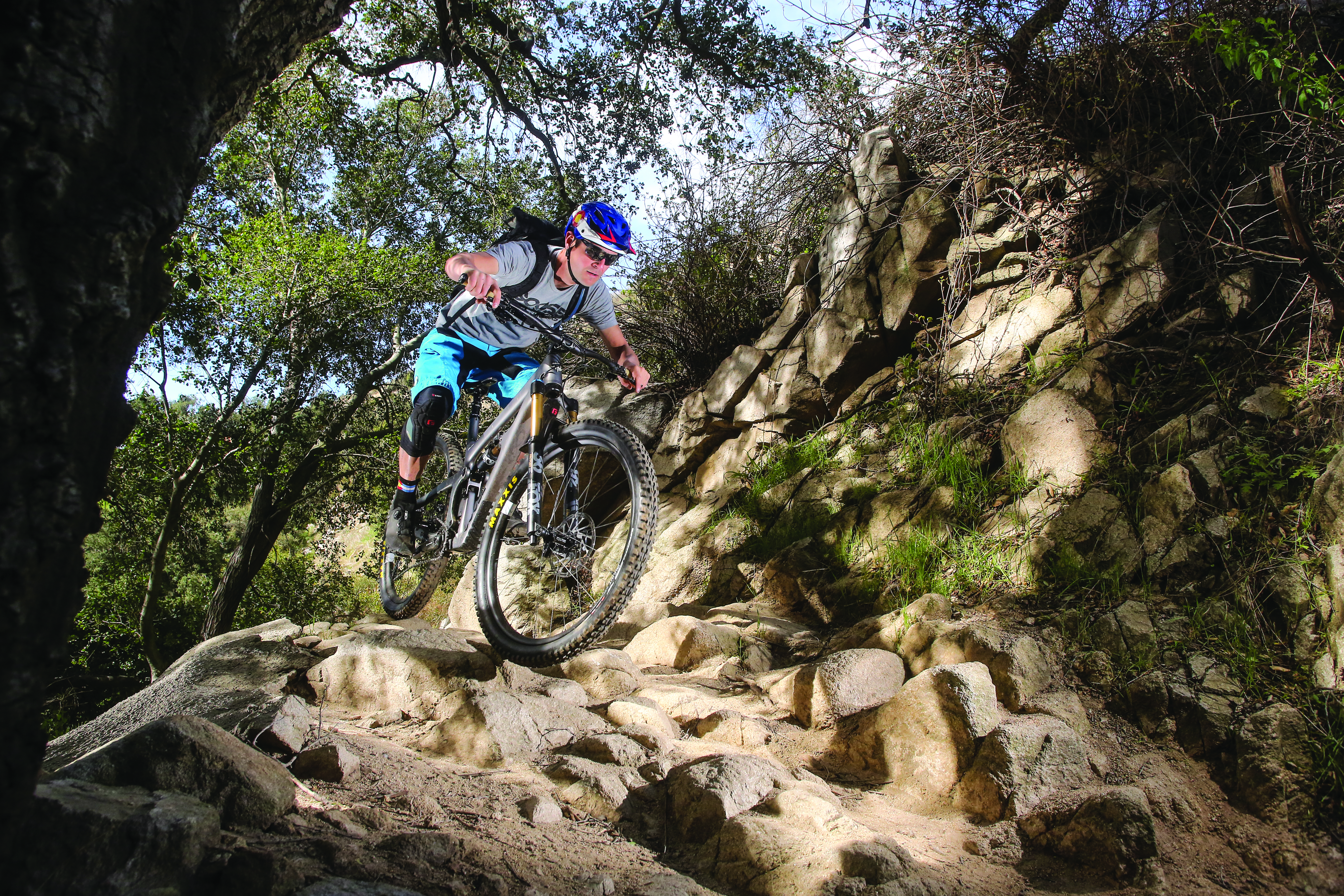 The SB150 is no featherweight. The 32.6 pounds is noticeable, especially considering much of that heft is distributed with big and wide tires on alloy wheels; however, the SB150 carries its weight exceptionally well and will climb anything if the rider has enough gumption. Like any proper enduro race bike, it’s designed to handle any transfer stage to get you to the top of the best trails, but it won’t be the most efficient vehicle along the way. It’s a tradeoff, like a powerful truck with a big V8 motor. A big truck is less fuel-efficient than a lighter-weight one, but it is also tougher. Just sit in the comfort of the big frame, enjoy the powerful climbing position, and know the SB150 can and will find the top of the hill eventually. The SB150’s handling comes alive when it is pushed into fast corners. It can also become a handful for riders who want to pick and choose their way through the turns. The bike loves to corner fast, and the aggressive geometry pays big dividends at speed, where the SB150 tracks through fast and rough turns with aplomb. The SB150 can be more difficult to maneuver at slow speeds, thanks to the long wheelbase and slack geometry. Thankfully, the excellent weight distribution keeps things manageable and had us snaking through tight switchbacks soon after we got used to the bike’s “keep on truckin’” personality. The SB150 descends fast and with authority. The long but stout carbon tubes that make up the front triangle bring plenty of stiffness to the table, which translates to steering precision and confidence on even the roughest terrain. The SB150 begs you to push harder into rough lines and let the ample suspension travel and aggressive geometry clean up the rough edges as you plow straight up and over obstacles. It’s clear that descending was the first priority of the SB150 design. And while it’s not as poppy or playful as a park bike, nor quite as plush and forgiving as a full-on downhill bike, we’re still confident this is the fastest weapon for descending nearly any trail out there. And the fact that enduro race bikes don’t need a chairlift to access descents makes them that much more appealing. 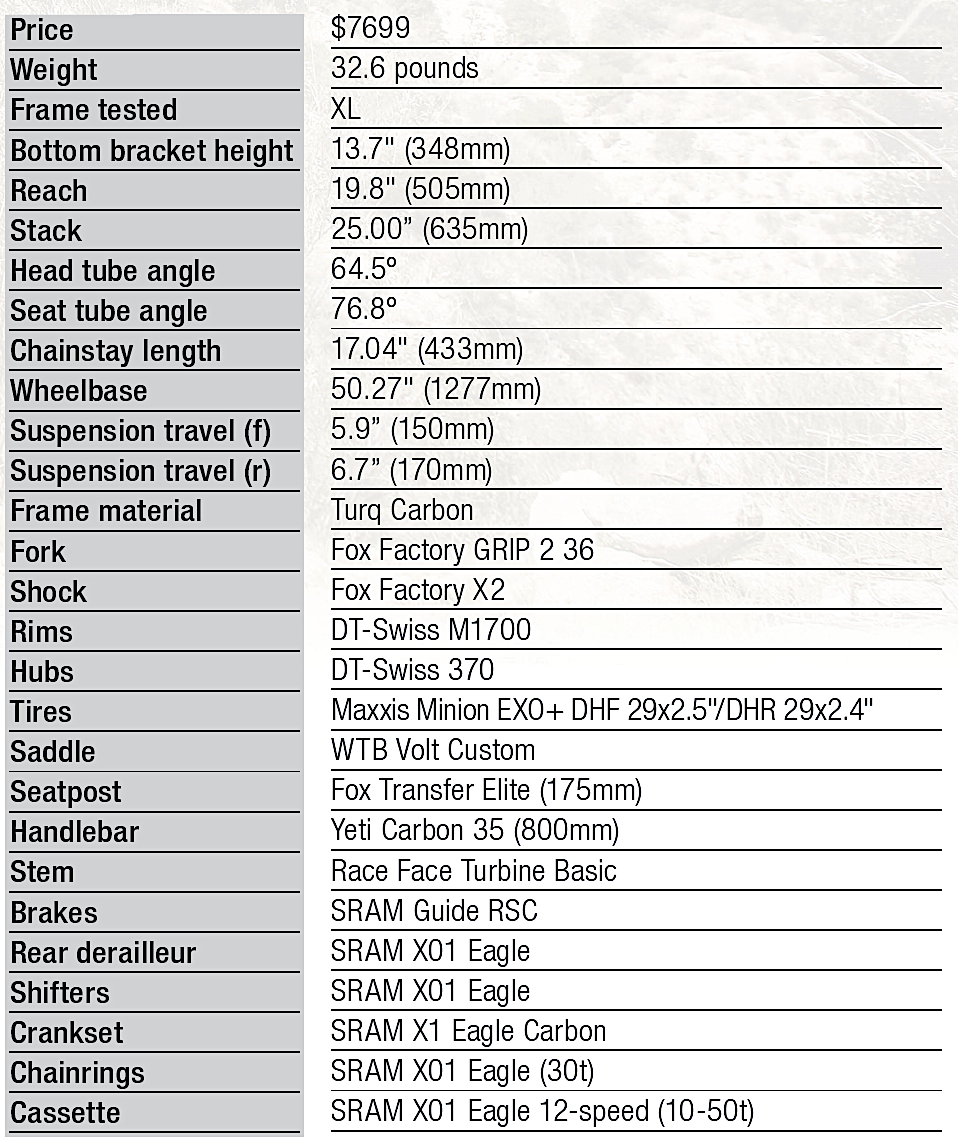 The fork and shock come stock with no volume spacers, which makes the travel feel springy but uncontrolled. We installed two spacers in both the fork and shock, which improved both small-bump compliance and control on big hits and drops.

The cable routing is exceptional, with individual and internally sleeved slots for the brake hose, dropper post and shifter cable. Our only tweak to the sleek-looking routing was a bit of 3M 2228 Mastic tape on the housing where it enters the frame to keep the bit from rattling.

The Switch Infinity suspension design looks like a maintenance nightmare to the novice mechanic. Take it apart, though, and you’ll be dumbfounded by how simple it actually is. Don’t let the extra Kashima bits scare you. The Switch Infinity design is not more maintenance-intensive and has held up to our testing on several different platforms without fail. If the SB150 were a gas-powered vehicle, it would be a little like a brand-new Ford Raptor pickup. It’s purpose-built to handle blasting down a rough road with the accelerator floored and the r conditioner maxed out without batting an eye. It takes every bit of modern geometry and suspension technology to make a bike of that’s as forgiving as it is fun to ride when the trail gets rough. It eats big rocks like they’re featured on an all-you-can-eat buffet, and then metabolizes them into speed, control and ground-leveling performance. You can ride more mundane trails with the SB150, but don’t expect it to shine when you’re maneuvering at slow speeds or trying to fit it into the compact spot at Trader Joe’s. This is not a beginner bike, and it doesn’t make any apologies for that. If you’re looking for the best in efficiency, look elsewhere. But, if you’re looking for a big vehicle to take your riding to the next level, the SB150 might be the race-inspired super vehicle to tame the gnarliest trails you thought no trail bike could handle.