YT, a consumer-direct brand from Germany, has long focused on gravity riding. From the Red Bull Rampage to World Cup enduros and downhill racing, YT has you covered. That said, if you’re a trail rider or a more aggressive cross-country rider, YT’s lineup hasn’t been for you—until now. The all-new Izzo sits right between a trail bike and a down-country bike (a term that refers to downhill-capable XC bikes). So, what sets the Izzo apart from YT’s other models? Let’s find out. 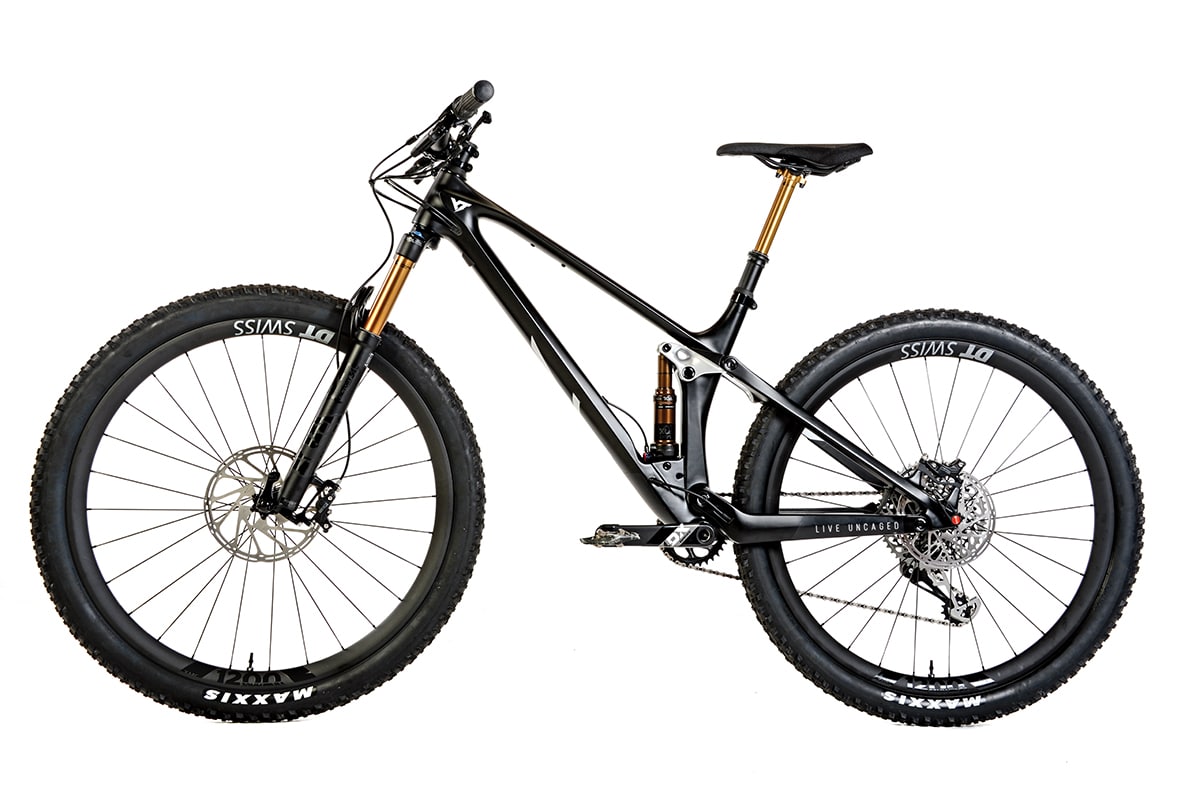 The first thing to catch your eye is the Izzo’s vertical shock platform, a first for YT. This was likely used to integrate the remote-actuated lockout system, also another first for YT. The bike gathers inspiration from a Samurai sword, promising to be sharp, agile and fast. To accomplish this goal, the new YT is only sold with a carbon frame and features 130mm of travel front and rear. The frame has internal cable routing, water-bottle clearance inside the frame and an integrated “chain-suck” plate that prevents the chain from falling off into the frame. The geometry is very YT, with a slack 66-degree head tube angle combined with long-reach numbers across all five sizes. Last but not least, YT offers Flip Chips to make further geometry adjustments.

YT offers three models, as well as a limited launch addition, ranging in price from $2999 to $5999. Our Pro Race model retails for $5299, including carbon wheels, a SRAM XO1 Eagle drivetrain and Fox Factory suspension. YT’s direct-to-consumer model allows them to achieve some pretty incredible price points. At just under $3000, a rider could have a carbon frame, Fox performance suspension and SRAM G2 brakes. This package would likely cost $1000–$2000 more from a retail store brand.

YT teamed up with Fox for all Izzo models; however, they preferred the look and feel of RockShox’s remote lockout. The system uses a Grip-Shift-style mount located on your left-hand grip. Twisting the remote towards the rider opens up the suspension, and a small button locks it out. The rear suspension pivots on a four-bar Horst link with 130mm of travel. In front, the Izzo features a 130mm-travel Fox 34 Factory fork.

The Izzo is for riders who want to get out and ride whatever terrain is currently available to them. It has enough suspension travel and relaxed-enough geometry to tame more aggressive trails, while its climbing ability encourages riders to stay out all day.

After setting the appropriate amount of sag, we headed out the door with a big ride planned. The ride started off with a heart-pounding climb, which allowed us to test the use of the remote lockout. The system proved to be quite useful on smooth climbs where you want as little shock movement as possible. On singletrack climbs with technical features, the lockout seemed to limit shock movement a little too much. With that said, the open setting offers plenty of traction on those types of trails; however, the open setting on smooth climbs left us bouncing our way up the trail. Once familiar with the two different feelings, it was pretty easy to select the better option for changing trail conditions.

YT tailored the fit more towards trail riders than XC riders with an upright seated position and a slack front end. This proved to be a comfortable feeling during longer rides. The Izzo might have a lockout and good pedaling efficiency, but it’s not to be confused with a cross-country race bike.

Once we hopped on the Izzo, we quickly wondered whether or not YT was able to retain its passion for gravity riding. Sure, the bike climbs great, but it wouldn’t be a YT if it had to take the easy trail down. Luckily, the Izzo showed no mercy as we dropped into our first descent. The bike is fast and agile in tight sections, but isn’t afraid to hit jumps or blast long straightaways. The Izzo often felt like a longer-travel bike on the descents, thanks to its well-thought-out geometry and top-of-the-line suspension package. Sure, this bike won’t ride like an enduro bike on the descents, but its ability to bounce around the trails makes it a fun ride no matter what trails you’re on.

The one component that left our test riders scratching their heads was the narrow 760mm handlebar. While the bars provided enough leverage for the rider to feel in control, we thought it was an interesting option to spec bars that narrow. Most of our testers would have liked a 780mm bar with the option of trimming it down to 760mm. Other than the handlebar, we couldn’t find anything to criticize. YT even offers a clever toolkit, featuring everything a rider will need to get his bike ready to ride. 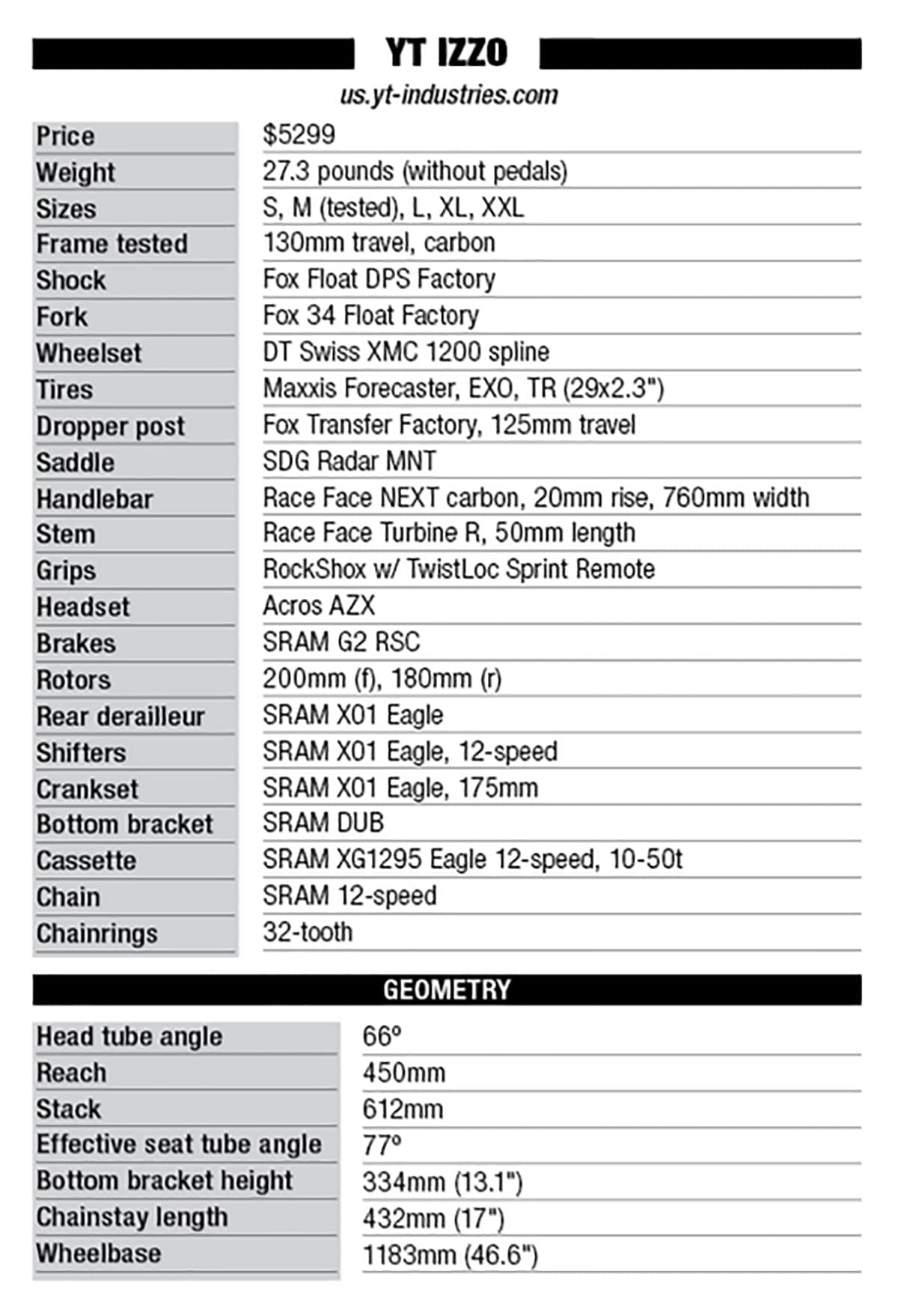 The Izzo is designed for the rider who wants the perfect balance between downhill fun and uphill capability. It’s fast on climbs and descends with authority. Its rear lockout is a handy feature that allows riders to pedal this 29er like an XC bike, but once at the top, the suspension opens up, allowing riders to thoroughly enjoy every bit of the mountain. Best of all, YT packs some serious value into each of these build kits, ensuring you get great bang for your buck sent right to your front door. If you’re in the market for a versatile trail shredder from a consumer-direct brand, add the YT Izzo to your shortlist of options.