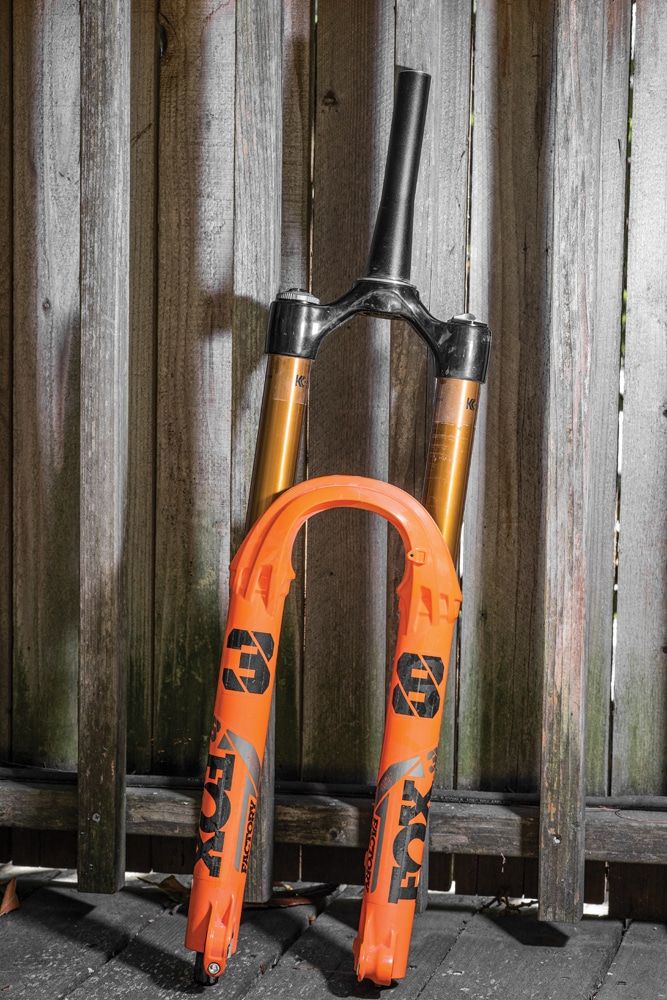 It’s no secret that Fox stepped up its suspension game with a newly updated line for 2021. Fox launched three new forks, two new shocks, revamped dropper posts, and even some smaller bits that change the rest of the product line. The most notable product in this launch was the Fox 38 fork. Why so much attention? Because it’s intended to bridge the gap between the Fox 36 for trail/enduro riding and the Fox 40 used on downhill rigs.

It makes sense for Fox to wedge a 38mm stanchion option right in between its other siblings. To be completely fair, though, our wrecking crew at MBA never felt that a Fox 36 was a compromise. Today, we dive further into the new Fox 38 and what it has to offer.

In comparison, the Fox 38 is claimed to be 17-percent stiffer fore and aft and 38-percent stiffer during torsional load than a Fox 36. It is a big deal to have added stiffness. By no means has the Fox 36 ever felt “flexy” for our riding conditions. More on the field results coming up.

To achieve more performance, Fox redesigned the chassis of the fork. Exclusively for the 38, Fox built an elliptical steerer tube. This is to keep the crown/steerer junction from being the weakest element of the fork. Essentially, Fox put more material where the steerer is pressed into the crown as a step towards making a sturdier fork.

From there, Fox completely redesigned the lower. This new arch shape is also shared on the new 36 and 40. The design is intended to add plenty of clearance when the fork sinks fully into its travel on frames with oversized head tubes. Next up, the forks now come with lower-leg air bleeders. This is to help relieve the atmospheric pressure that builds up in the lowers after some laps or when constantly changing elevation. Fear not! This bleeder system does not touch the air spring.

New for the 36 and 38 is a completely reimagined thru-axle. This clever floating axle design allows control when securing the front wheel. This system is unique in that it matches the exact width of the fork’s wheel-mounting surface precisely to the front hub-flange spacing. This ultimately causes the chassis to be aligned perfectly while eliminating unwanted friction between the upper and lower fork legs. 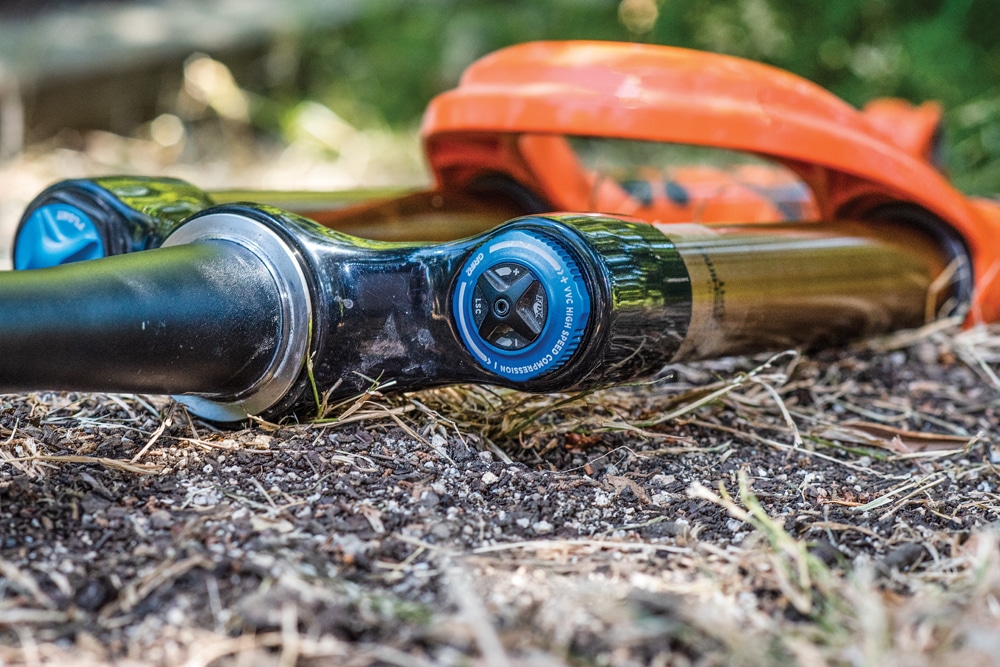 Inside this new chassis, we find the proven GRIP2 damper is still the go-to option; however, Fox has updated the damper with Variable Valve Control (VVC). This was previously found on the high-speed rebound. Now, it can be utilized for high-speed compression (HSC) damping as well. For a simple explanation, the VVC regulates how easy or difficult it is for oil to pass through. On a GRIP2 Fox 38, there are eight clicks of HSC, along with 16 clicks of low-speed compression (LSC) and nine clicks of high- and low-speed rebound adjustment (HSR/LSR).

So the damper changes slightly, but the Evol air spring on all forks received a larger negative air chamber. Typically, the inner walls of the stanchions would serve as the air chamber. In the case of the 38, there is a separate sleeve inside. Enough suspension nerdiness. How does this new fork tackle terrain? 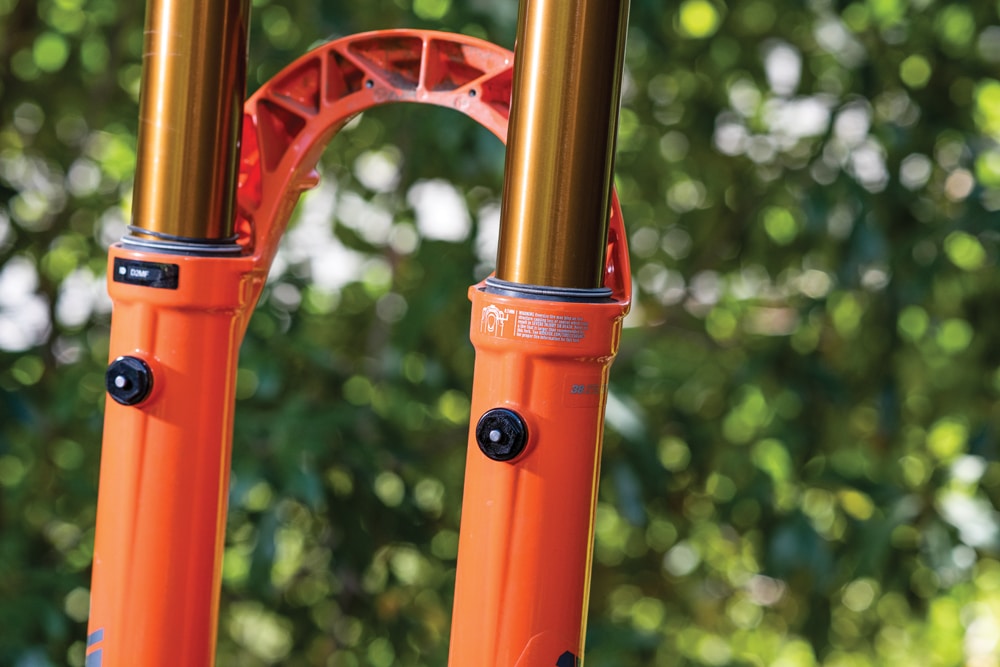 Despite the state of the world, our main test rider was able to get in some heavy-hitting ride hours on a 2021 Factory Series Fox 38. Once we got our fork installed, we took the time to go through each step of properly setting the suspension.

Fox’s guide gives the rider a great starting point to dial in his fork. To achieve proper sag, we ended up adding 5 psi over what was recommended on Fox’s weight chart. We dialed in the HSC setting six clicks out instead of the recommended five. We felt that this one click was plenty to help performance on bigger hits. From there, we set the LSC setting seven clicks out instead of the recommended five clicks. Dialing this out by two clicks gave us slightly less compression damping and better control when shifting our weight around the bike. LSR and HSR were both set seven clicks out. We like the fork to be a bit quicker to rebound than the initial suggestions from Fox. 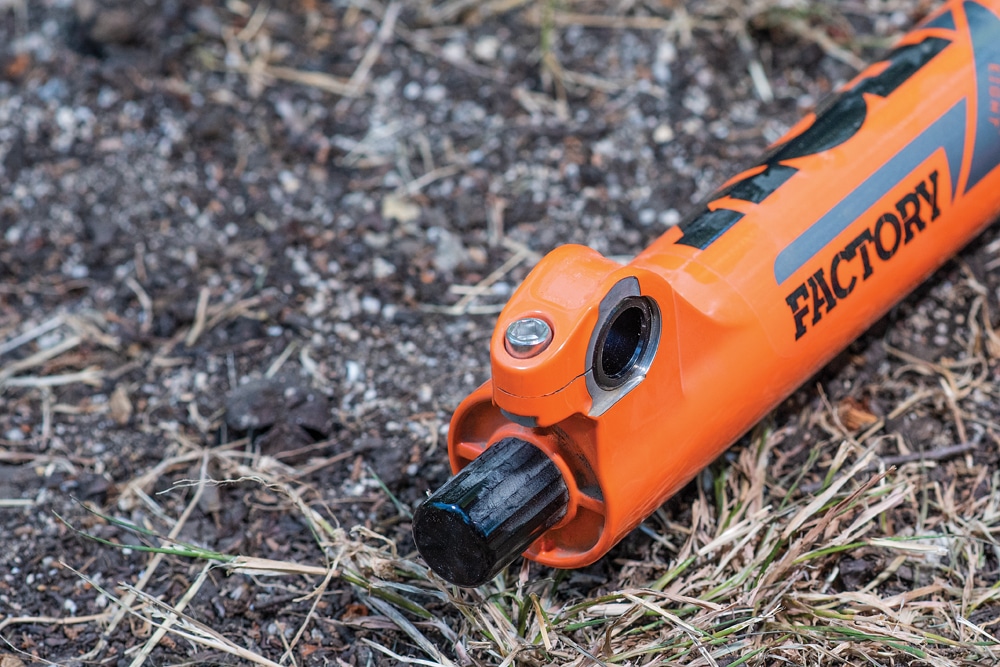 This is a minor but important note for those thinking of upgrading their older 36 to 2021 38 or 36. Both the new 2021 options have a longer axle-to-crown measurement than in previous years. This means if you do purchase this new fork, it will slack out your bike’s head angle slightly. We could feel this on the climbs, but since we mostly tested the 38 on an enduro bike, we were happy to be slightly slacker when hitting the descents.

The big terrain hits are where the 38 truly shined. The fork is able to handle high-speed impacts while eliminating the feeling of slapping against the trail surface. There is no harshness or excessive feedback. It really feels soft initially and then ramps up predictably as you work into the travel. Yes, by design the fork is intentionally stiffer. Our main tester never felt like this negatively affected the handling and control. In fact, he felt it was incredibly stable at speed. Overall, it offered a big step up in bump control while providing increased traction.

The Fox 38 fork nails it for the world’s fastest enduro racers who need to perform and push the sport to new heights, however, the Fox 38 might not be for everyone. If you are a heavier rider who pushes the limits of your bike and you want to ride at a fast pace, then perhaps a 38 is right for you. Nonetheless, it is a noticeable improvement from the Fox 36. It really left us wanting to hit more and more laps while providing us with the confidence to ride faster into rough terrain.