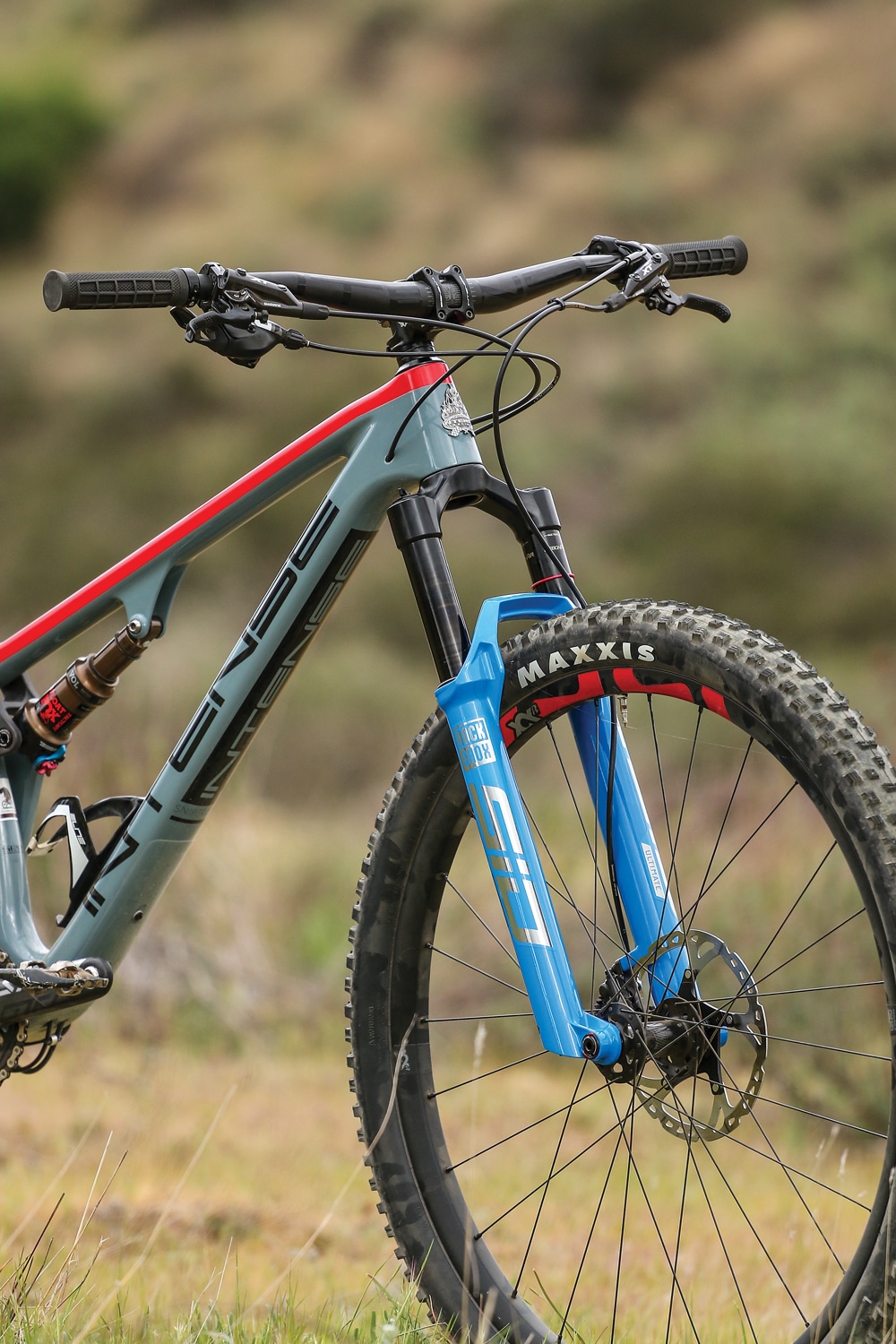 Rock Shox first arrived in the mountain bike market in 1990. The new SID Ultimate shows how far they’ve come in that time.

In the highly competitive world of elite cross-country racing, every component must be top-notch. This is why RockShox poured its heart into creating the new SID Ultimate. They want to continue their race record as the winningest fork in mountain bike history. The new SID models received a complete makeover with an updated DebonAir air spring and a new Charger Race Day damper.
RockShox then updated the SID chassis with two options: the SID Ultimate SL, built purely for racing, and the SID Ultimate, a beefed-up 35mm fork designed to better handle the rough stuff. The MBA wrecking crew put the more trail-friendly SID Ultimate model, featuring 120mm of travel and larger 35mm upper tubes, to the test. We placed the fork on our Intense Sniper Trail and got to work putting in laps. 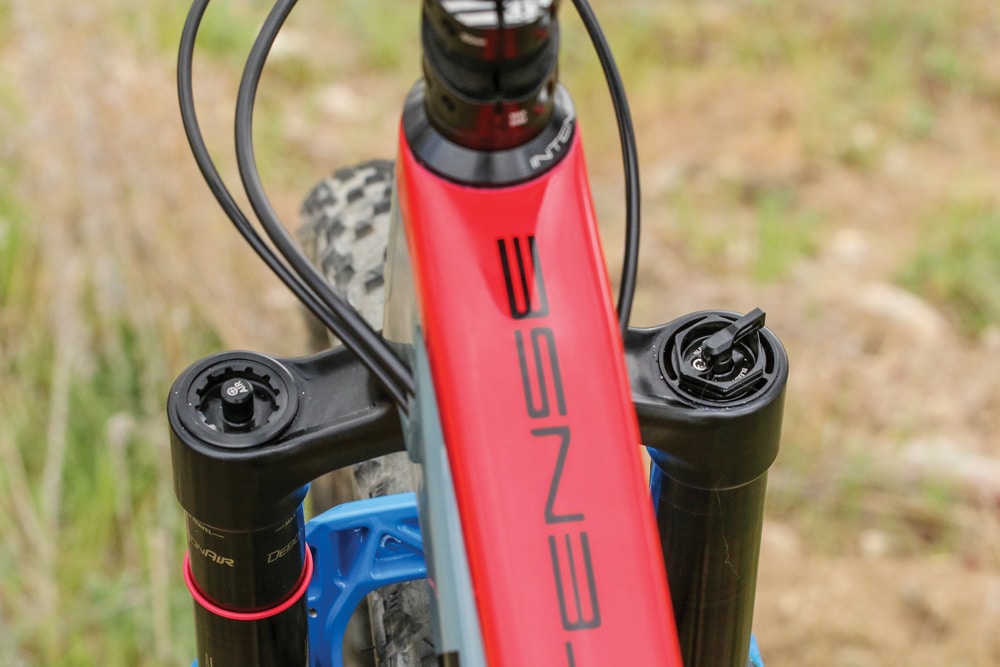 The lock-out lever atop the right leg is easy to operate.

Both the SID Ultimate SL and SID Ultimate are completely redesigned; however, for our testing, we will be focusing on the all-new beefy SID Ultimate model. While both forks are still aimed towards cross-country racing, we expect top pros and serious racers will lust after the ultra-lightweight, 32mm stanchion SID SL fork, while marathon racers and riders looking to push the limits of shorttravel bikes will prefer the confidence the larger SID Ultimate fork delivers. For both options, riders will be limited to 29-inch wheels, as RockShox is claiming 27.5-inch XC race bikes are a thing of the past.

The SID Ultimate SL model is only offered with 100mm of travel, while the SID Ultimate offers either 100- or 120mm of travel. Along with the SID’s updated external appearance is an all-new set of internals, including the new Charge Race Day damper that has been shrunk and milled out and uses less oil to reduce weight. The rebound adjustment was then sunk deep inside the lower fork leg, requiring a removable hex key for rebound adjustments. The upper compression knob has been replaced with a simple lockout switch. Furthermore, the new damper features a lighter compression tune for a supple, off-the-top feel. 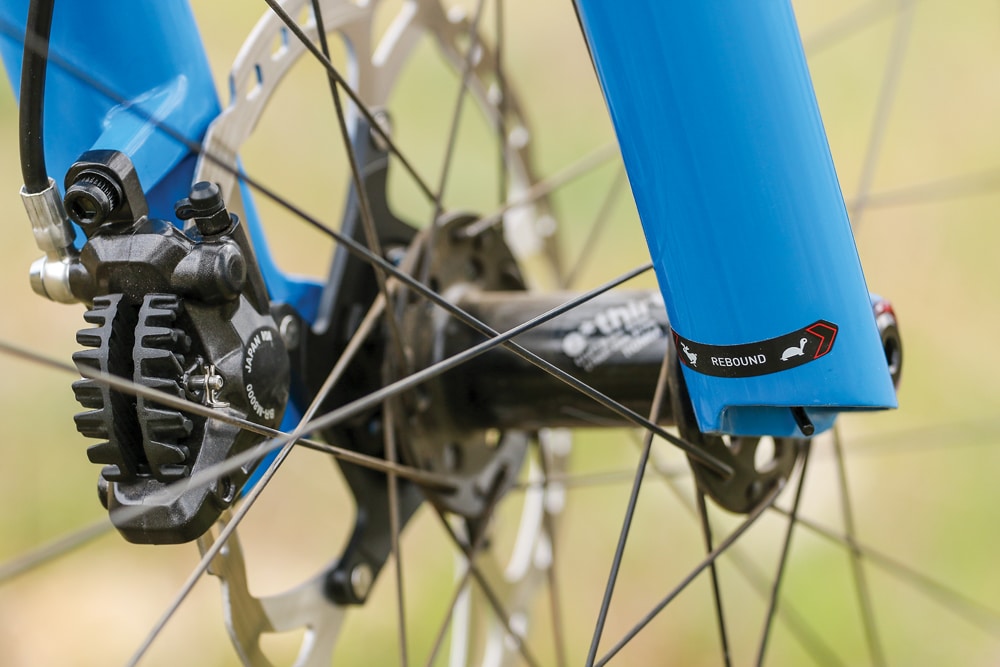 The rebound adjustment can be found at the bottom of the right fork leg.

The DebonAir air spring was then tweaked internally with a relocated port to keep the fork riding higher in its travel. RockShox then teamed up with Maxima and SKF to make sure the oil and seals were topnotch. Other features include an optional handlebar-mount twist-lock remote and a rear fender mount for wet conditions. Riders can purchase the SID in blue or black and can expect it to weigh around 1537 grams in its 120mm-travel trim.

It’s no secret that the all-new SID Ultimate is a direct competitor against the Fox Step-Cast 34. While this isn’t a comparison test, it’s hard to talk about one without mentioning the other. While Fox took the approach of offering a lightweight option with full adjustability, RockShox clearly focused on saving weight, undercutting the Step-Cast 34 by 86 grams (3.03 ounces). With that said, Fox continues to offer a three-position damper and low-speed compression, while RockShox ditches low-speed compression adjustment and only offers a two-position lockout.

Now, with that out of the way, let’s dive back into how the all-new SID performs once out on the trails. When it comes to small-bump chatter, the new SID is more composed than ever before, offering a supple feel without diving during bigger hits. The simplicity of the fork’s adjustments also played a role in getting our testers squared away and comfortable right out of the box. The rebound knob can be a little tricky, and we would have preferred a traditional dial; however, we understand that weight savings comes at the cost of certain features. The lock-out dial up top has a trick machined look that’s easy to operate while charging at race pace. As we pushed on to more aggressive trails we found the SID Ultimate held its own off jumps and drops, proving to be more than a cross-country fork. In fact, we’d almost categorize this fork as a mini Pike instead of a beefed-up SID due to its ability to attack the trails and inspire riders to take bad line choices or leap for bonus lines. 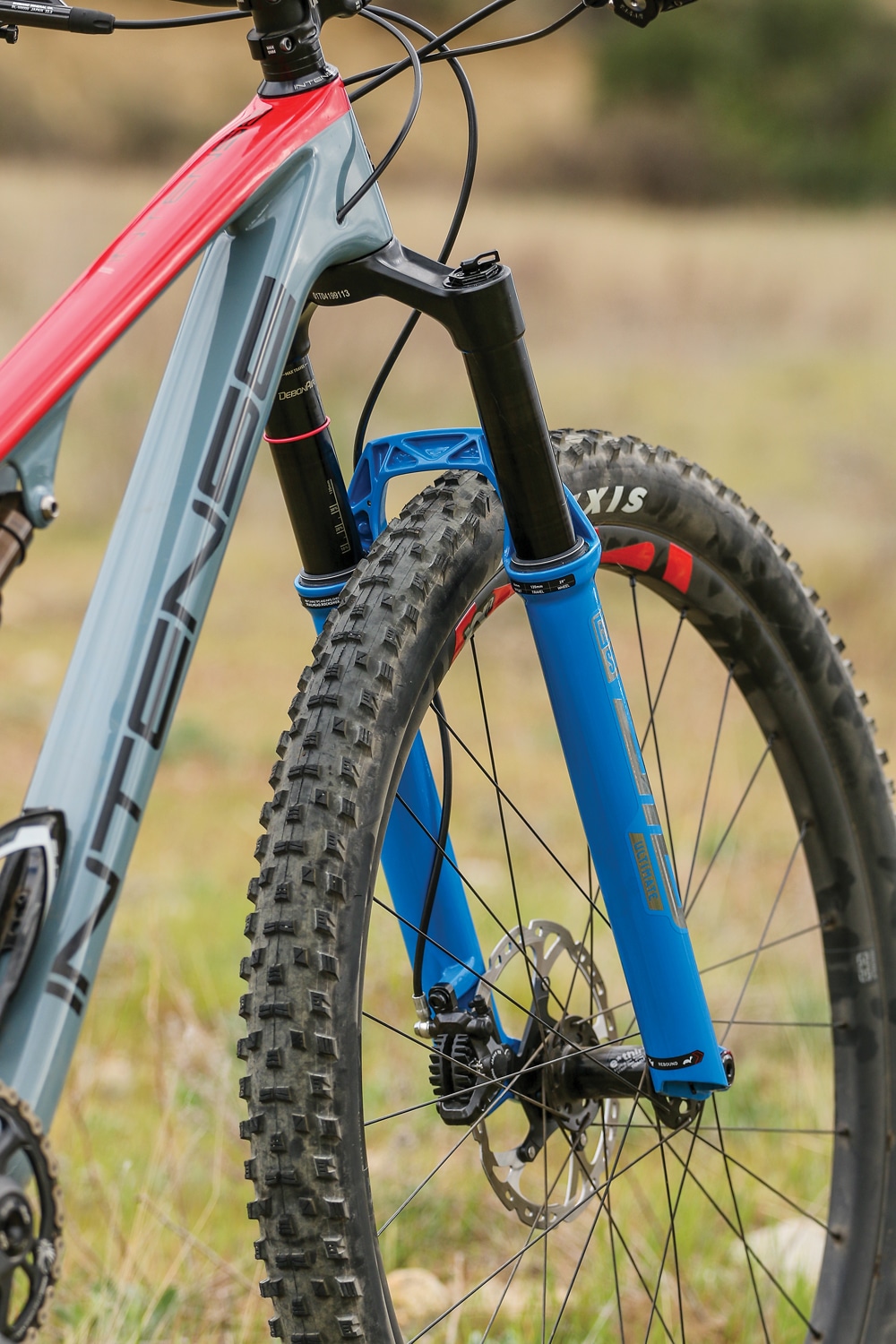 The 2021 SID Ultimate comes with travel options of 120mm (shown here) or 100mm. A separate model, the SID Ultimate SL, designed for racers, comes only with 100mm of travel.

Out of the box, the SID Ultimate offers a nice amount of ramp without the need for air-volume tokens; however, heavy riders or ones who want to “huck” their XC bikes to a flat landing will appreciate the added support. All in all, the new SID Ultimate fits the bill for any rider who wants to get out and have as much fun as possible tossing around a short-travel machine. It also caters to weight weenies who care about every gram they take off their bikes. The ideal rider for the new SID Ultimate is one who trail rides his or her cross-country bike during the week yet wants it competitive enough for hard-core weekend racing.