Single-ring drivetrains have come a long way over the years, thanks to innovations from various companies such as SRAM, Shimano, Race Face and many more. From clutch systems built into derailleurs to prevent chain slap to narrow-wide chainrings designed to prevent chain drops, single-ring drivetrains quickly became a better solution for many riders. SRAM’s early entry into 1x drivetrains combined a front chainring sized to a rider’s preference, along with an 11-speed, 10-42-tooth cassette. 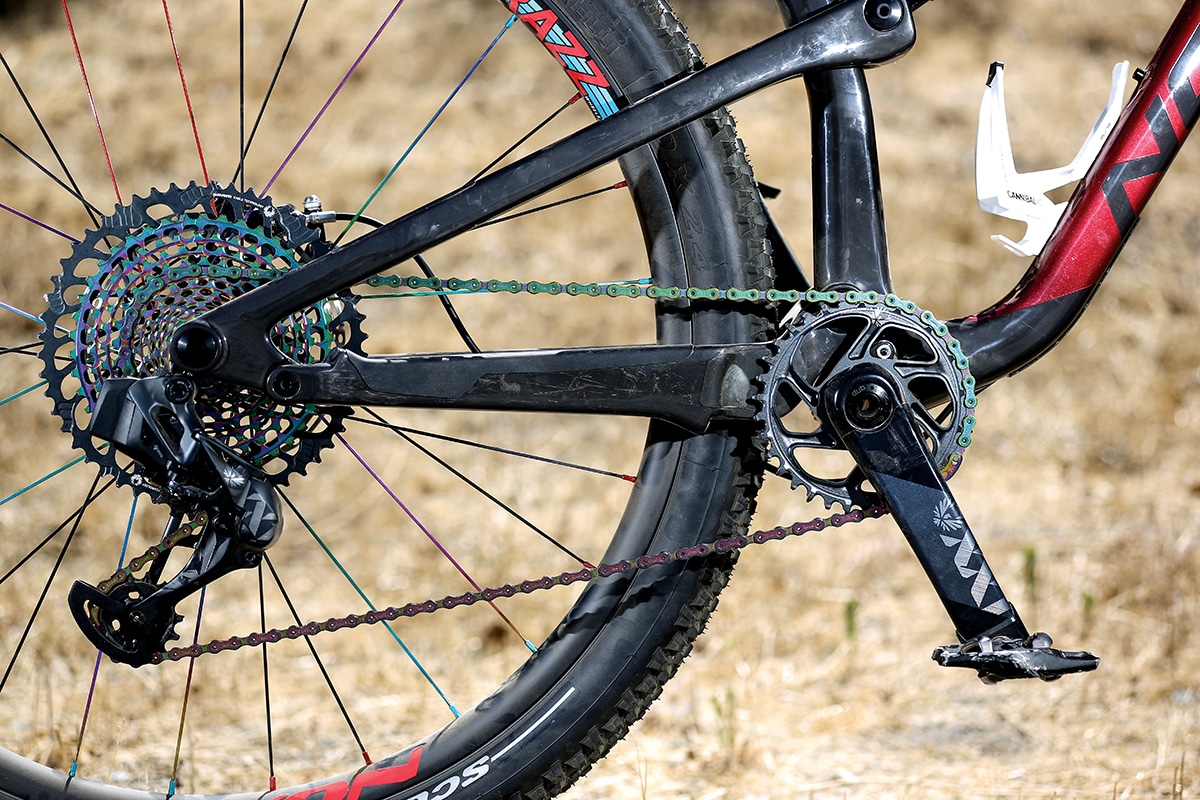 This 11-speed system caught on like wildfire as SRAM quickly introduced multiple price points. Later, a 12-speed system was created and given the name Eagle, also offering multiple levels at different price points; however, this time around, it offered a huge 10- to 50-tooth cassette. Shimano battled back with its single-ring drivetrains and upped the ante with an additional gear offering a 10- to 51-tooth cassette. This all brings us to what we’d like to introduce to you today. SRAM expanded its cassette range up to a massive 52-tooth cassette. We decided to see what the fuss was all about and if the additional 2 teeth over SRAM’s past cassette would be a worthy upgrade.

As with most bicycle products, compatibility is one of the biggest issues. SRAM set out to solve this problem without charging riders an arm and a leg. The new larger-range cassette was first introduced in SRAM’s mid-level GX drivetrain platform. The main difference is the upper pulley wheel was pushed out 10mm to help clear the added 2 teeth. The trick to knowing if your derailleur is compatible or not is to look at the stamp on the back. If it says the derailleur has a 500-percent range, then its max tooth is 50. That said, if it reads 520 percent, you’re good to go with a 52-tooth. This rule only applies to mechanical derailleurs, since all AXS wireless derailleurs feature the relocated pull wheel. For that reason, we decided to test the new cassette on a bike with an AXS drivetrain.

Riders with mechanical drivetrains can purchase a new derailleur and 52-tooth cassette to upgrade their current Eagle drivetrains. In fact, the same XD driver freehub body is still used to make swapping the cassette an easy job. Additionally, the new cassettes are sold in multiple color options, such as black, copper and rainbow.

Riders looking to upgrade to the larger gearing can also purchase a complete GX Eagle drivetrain with the new 52-tooth cassette, which has a forwards- and backwards-compatible derailleur for $525. If a rider has any level of AXS drivetrain, he can purchase a SRAM 52-tooth cassette from GX up to XX1, ranging in price from $215 to $450. The differences come down to weight and materials. 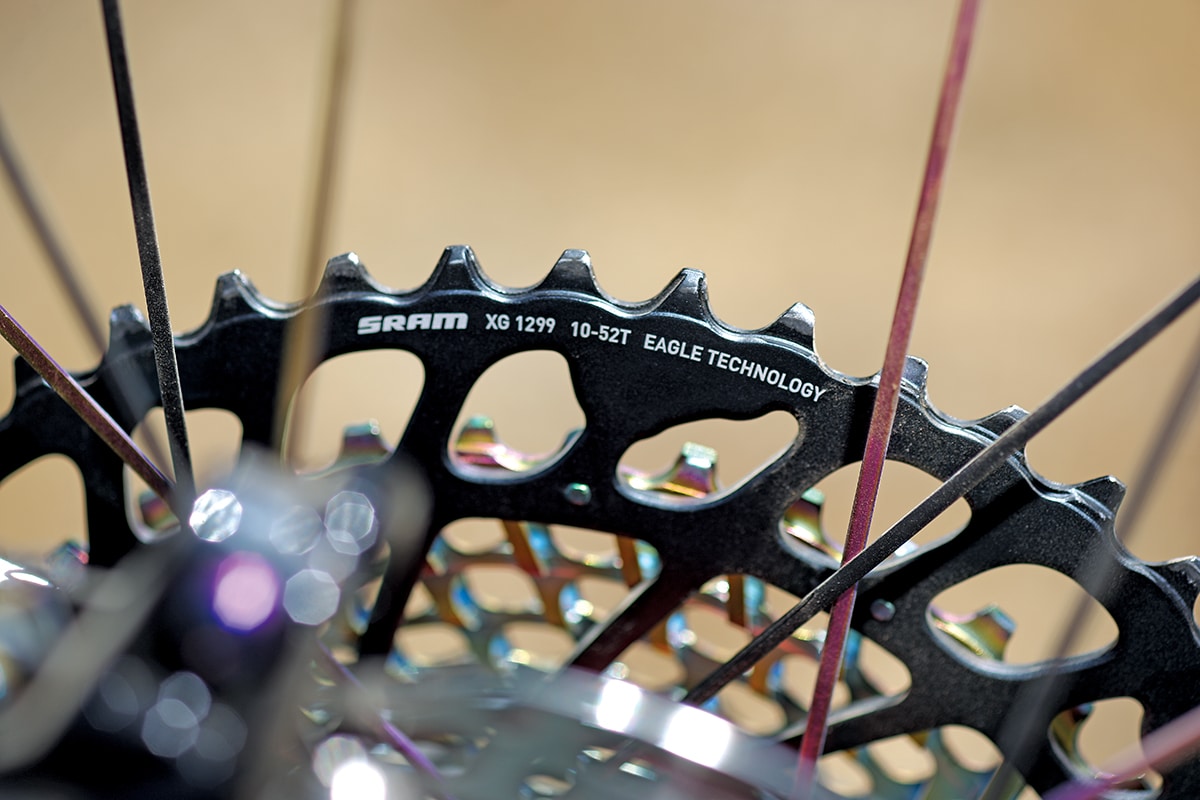 Considering what’s involved in converting to SRAM’s extended-range cassette, our test riders asked themselves if it was a worthy upgrade. It’s rare our test riders use the largest ring in their cassettes; however, when they need to, they really need to. In fact, we’re sure every rider can relate to the feeling of pushing the shifter in hopes of an easier gear only to find his drivetrain is maxed out. This is exactly what the expanded range is designed for. The two extra teeth in the bailout gear are there to save you during long rides or super-steep sections where spinning is key.

That said, how do the extra 2 teeth affect performance? Considering the jump still goes from a 42-tooth, riders now shift up by 10 teeth instead of making a smaller 8-tooth jump. On the trail, we noticed an ever-so-slight delay compared to the 50-tooth, but during climbs it was greatly appreciated. It’s not a gear so riders can go slower up climbs; instead, it’s there to allow riders to spin a faster cadence, making the climb feel easier. Shifting up and down the cassette offers the same great performance, and while we noticed a minor delay, it was never an issue.

So, which riders will lean towards the new 52-tooth cassette and which will want to keep their 50-tooth (which by the way is staying in SRAM’s lineup)? Our guess is enduro racers and trail riders will find the added teeth in their bailout gear helpful during epic rides or strenuous races. Fit XC riders and racers may also benefit from this larger cassette, as it will allow them to run a larger front ring for an overall faster setup. Whether a rider wants to run a 50-tooth or 52-tooth cassette, it’s best to buy one of the newly designed derailleurs since they’re compatible with both cassette options.

Would this cassette be a worthy upgrade for your current bike? The honest answer is yes and no. Riders who want an easier gear to make it up the steepest climbs on their local trails will get some benefits from this system. Meanwhile, riders who ride more level terrain and often avoid the bailout gear will only notice a slight performance gain. With all that said, as the old saying goes, “It’s better to have it and not need it than to need it and not have it.”

• Older mechanical Eagle derailleurs are not compatible with 52-tooth cassettes