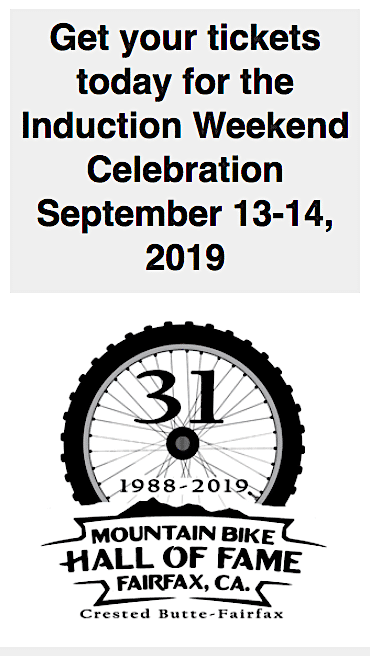 Otis Guy, Director of the Mountain Bike Hall of Fame, has announced the names of the four individuals elected into the Hall, following the tabulation of 2019 ballots. The inductee-elects are Tim Neenan, Myles Rockwell, Rebecca Rusch and Derek Westerlund.

Our new inductee-elects will be honored and officially inducted at the Mountain Bike Hall of Fame’s induction weekend, to take place Friday and Saturday September 13-14, in Fairfax, California at the Mountain Bike Hall of Fame. The weekend’s events include a meet-and-greet party Friday night; celebrity rides on the trails of Mt. Tamalpais on Saturday morning with a great BBQ lunch afterwards and Saturday night’s dinner and induction ceremony. 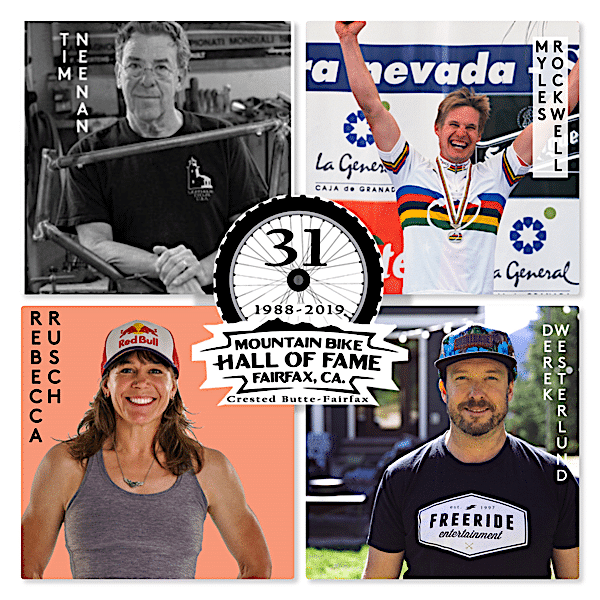 Tim Neenan, the man behind the original Specialized Stumpjumper. By now we all know that Mike Sinyard introduced the first widely accepted mass produced mountain bike, the ‘Stumpjumper’. But the man who actually conceived the bike, built the first prototype and convinced Sinyard to put it into production, was someone else entirely, a nearby framebuilder from Santa Cruz, California.

Myles Rockwell’s speed, personality and iconic riding style made him a fan favorite around the world. One of mountain bike racing’s superstars, his results and “gentle giant” image made him the perfect package for sponsorship’s and TV appearances. Myles’ mind was also naturally inclined to understand cycling technology and equipment, and he made many unique contributions to research and development during his downhill racing career. The “God of Gravity” became the World Champion in 2000.

Rebecca Rusch, recognized by Outside Magazine among the Top 40 Women Who’ve Made the Biggest Impact, and Men’s Journal with the 25 Most Adventurous Women in the Past 25 Years, she’s one of the boldest, kindest, most determined champions you’ll ever encounter, a maverick whose influence as MTB royalty has ignited loyalty for the sport among legions. Her grit, determination, and perseverance earned her the “Queen of Pain” handle, known for crushing monster endurance events and mountain bike races like the iconic Leadville 100.

Derek Westerlund. Part unsung hero, part mastermind and visionary, Westerlund has spent 25 years of years of his life pioneering the entertainment space in mountain biking and action sports. If there were one single person tied to every monumental moment in the sport of freeride mountain biking it would be Derek. Sometimes in the shadows but always in the credits, Westerlund’s original British Columbia crew were carving a path for freeriding before it had a name.

This event will sell out!
Tickets on sale now!

Tickets on sale now for the September 13-14 Mountain Bike Hall of Fame Induction Weekend events, including the 2019 induction ceremony and the other great events. This sells-out every year, so don’t miss-out, get your tickets today!

For more information about the inductees, please visit our website at https://mmbhof.org/mtn-bike-hall-of-fame/inductees/

Do’s And Don’ts Of Shoulder Dislocation