The Mountain Bike Hall of Fame has announced its inductees for 2020. Due to the current pandemic, the group will not be hosting an induction ceremony this year; however, the group did release its list of inductees, along with the reasons they were being inducted. The inductees for 2020 are Julien Absalon, Dafydd Davis, Tym Manley, Steve Behr, and Jason McRoy. Read on to learn more about them. (Note: Due to space considerations, we had to edit their biographies to fit them in these pages. Go to https://mmbhof.org/mtn-bike-hall-of-fame/inductees/ to read the full biographies.)

Julien Absalon ruled cross-country competition for the lion’s share of his 20-year career. Born in 1980, in Remiremont, France, near the German and Swiss borders, Absalon was introduced to mountain biking by a family friend at 14 and began racing shortly after with limited success. The talented youth caught the attention of Coach Gerard Brocks, and in 1998, his final season as a junior, Absalon introduced himself to international competition by winning almost every race he entered, including the World Championships, European Championships and the French National Championships.

At age 21, Absalon achieved the first of seven overall World Cup titles (2004, 2006, 2007, 2008, 2009, 2014 and 2016). He went on to win every French National Championship between 2003 and 2016 and was crowned European Champion five times. Absalon earned two Olympic gold medals back to back, first at Athens in 2004 and then at Beijing in 2008, and won the cross-country World Championships five times. Before retiring in 2018, Julien had won 33 elite World Cup races, an incredible feat by any stretch of the imagination, but numbers only tell half of Absalon’s story. His illustrious career was punctuated by dynamic changes in bicycle technology.

Absalon embraced simpler, one-by drivetrains, began using a dropper seatpost, and was one of the first top-ranked cross-country athletes to compete successfully on a dual-suspension bike.

Absalon credits Nino Schurter for forcing him to up his technical skills. After finding that Nino was consistently faster than he was on the downhills in 2013, Julien began doing enduro training with his brother Remy in the off-season to improve his skills on the descents. Nino, however, upped his own game on the climbs, so the two were so closely matched once they met up again that few riders had a chance against them. “For two seasons, elite cross-country racing was a two-man show,” says the Marin Museum of Bicycling website.

Absalon was 34 when he won his fifth World Championship. He earned his seventh overall World Cup title in 2016 at age 36 with a World Cup win at the series final in Vallnord, Andorra. His incredible run eventually caught up with him in the form of acute pollen allergies, compounded, his doctors say, by the volume of air his lungs ingested, pedaling at the red line for 20 years.

Absalon called it quits in 2018 and founded “Absolute Absalon”—a development team committed to bringing young talent into international competition. It’s no surprise that Coach Absalon’s prodigies are already achieving success. Best of all, this champion of champions never lost his love for mountain biking. In Julien’s words: “What I really like about mountain biking is the endurance, intensity, and being outdoors, which is also one of the reasons I’ve never tried road racing. I love to be in the forest and just ride my bike. It’s not only about pushing hard on the pedals; I love to ride for fun.”

Dafydd Davis is a Welsh climber, trail runner and avid mountain biker whose impact on the design and creation of UK mountain bike trail systems cannot be overstated. Over the last 20 years he has utilized his well-rounded background as an outdoorsman to not just establish trails, but to create the world’s first national development strategy for mountain bike trails and tourism.

Davis’ uniquely holistic approach in developing strategies for sustainable planning and construction methods has been so successful that it has set standards that are now in use worldwide. Rather than simply building trails, he has put an emphasis on reducing environmental and visual impacts while minimizing maintenance and management needs and reducing on-trail conflict by considering the needs of all stakeholders.

Dafydd’s robust methodologies, transparent standards and wide-ranging knowledge of land management and environmental issues, along with his knowledge of what mountain bikers want, has resulted in a global demand for his work, which now reaches beyond the UK into the Czech Republic, Poland, Canada, Australia, Japan and Israel.

In recognition of his contribution to the development of forest recreation and tourism, Dafydd was awarded an MBE [Member of the Order of the British Empire] in the Queen’s Birthday Honours List in 2004. 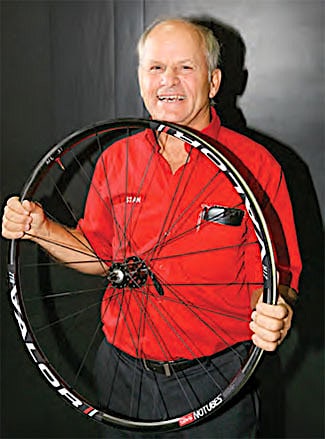 In the year 2000, a rumor began circulating around bike shops and mountain bike races. A guy in New York had figured out a way to replace traditional inner tubes with a liquid that could seal punctures almost instantly, improve traction and control, and even make the tires roll faster. On top of all that, the converted tires and wheels were lighter. It sounded too good to be true. Racers began to ask questions about the process. There was tape to seal the spoke holes, and a special strip that changed the interior shape of the rim. The inventor was developing a complete tubeless system that could work on many different rims and with nearly any tire. And it was faster. By the time 1996 World Champion Thomas Frischknecht had raced “Stan’s NoTubes” system to its first major win, pro teams, tire and rim manufacturers, and riders around the world were asking two things: “How can we go tubeless?” And, “Who is Stan?”

In the late 1990s, looking for a way to stay in shape for ski season, Stan borrowed his daughter’s bicycle. He knew from that first ride that mountain bikes were something special. With their larger wheels and tires, these bikes had the potential to go almost anywhere. Still, it was clear there was room for improvement, particularly when it came to flat tires. Having helped design more durable sidewalls for go-cart tires, Stan knew a tubeless system could offer major improvements. Some early attempts at tubeless mountain bike tires were available, but they offered few tread options and were heavy and unreliable. Stan started figuring out how to convert his favorite tires for use without tubes. Through constant trial and error, he developed his first batches of sealant and his rim tape.

Stan created his own machines and testing methods to measure the effectiveness and durability of sealant, testing hundreds of formulas. Other factors were tougher to test. Without tubes the bike felt faster, but it was tough to be sure. Stan started entering local races as an amateur and winning his 45-50 age group—in blue jeans at first. By 2001, he was in the pits at major events, working with pros such as Alison Dunlap, that year’s UCI XC World Champion. The lap times were proving it: tubeless was faster. Racing would continue to be a huge part of Stan’s testing process and played an even larger role as he began developing his own rims.

In 2001, Stan and Cindy founded Stan’s NoTubes and began offering products to consumers, dealers and distributors. As his sealant became increasingly popular over the next five years, rim manufacturers continued to send Stan rims to test for tubeless compatibility; he learned a great deal about optimal rim shape and why some rims converted to tubeless more easily than others. To test his ideas about rim shape, Stan turned down enormous pieces of aluminum on a lathe. Those early test rims (some of which he still has) weighed 30 pounds, but they let him make design adjustments quickly. Though common now, Stan’s original tubeless rim design was radically different at the time.

One factory went so far as to tell him it wouldn’t work. The design not only worked; it worked better. Wider than many designs at the time, Stan’s rims featured a specially shaped inner channel and extremely short sidewalls that allowed tires to expand to their full volume. Supported by five patents, Stan’s Bead Socket Technology rim design has since been ridden to many national and world championships, and multiple Olympic medals, including a gold medal won by Sabine Spitz in the 2008 Beijing Olympics on Stan’s rims. The design has played a key role in establishing modern tubeless technology.

True to the racing heritage that helped establish his designs, Stan has played a key role in sponsoring athletes, races and events, and supporting a wide range of trail and cycling initiatives. His company has become particularly known for supporting women’s cycling and the development of young riders. The company is committed to the preservation of trails as a supporter of IMBA and many local trail and advocacy groups. The company continues to be a strong supporter of mountain bike racing and any event that brings riders together.

Today, Stan works primarily with carbon fiber designs and fabrication processes, but in true Stan fashion, it’s not unheard of to see him working on the sealant machines or building up a new wheelset for a customer. He continues to develop new products and to find new problems to solve.

Jason McRoy is widely regarded as the first true superstar of British downhill racing, paving the way for his peers and those that would follow him.

McRoy inspired many other downhill racers in Great Britain, including Rob Warner [who, in 1996, would be the first British rider to win a downhill World Cup] and Steve Peat [who would win three World Cup titles plus the 2009 Downhill World Championship].

McRoy died on August 24, 1995, when his Harley Davidson motorcycle collided with a “lorry” (a truck) in Derbyshire, England.

The next month, Steve Peat and Rob Warner took film canisters containing McRoy’s ashes, strapped them to their bikes, and raced with them in the finals of the UCI Downhill World Championships in Germany.

Said Steve Peat later, “It was a huge honor to be able to race the World Championships carrying Jason’s ashes. UK racing would have been different if Jason were still around, and he is greatly missed by everyone.”

In February 2010, some 15 years after his death, Jason was selected as one of the most significant riders of the last 50 years and was inducted into the British Cycling Hall of Fame alongside 49 other inductees.