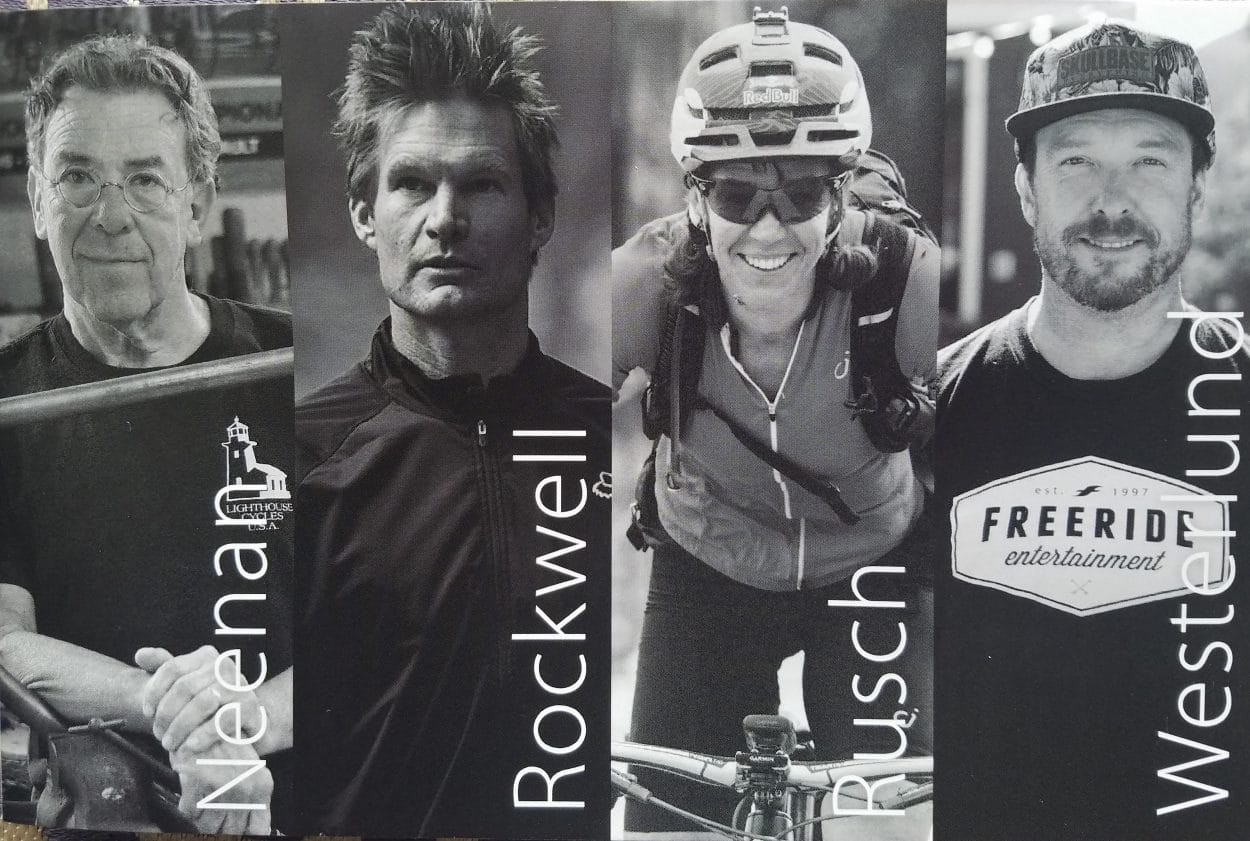 The  star-studded affair took place at the Marin Museum of Bicycling located in the picturesque town of Fairfax, CA which sits under the shadow of the famous Mt. Tam. where the sport’s NorCal pioneers first put the sport on the map.

Both the Marin Museum of Bicycling and the MBHof balloting is also open to the public …for more info on nominating, voting, attending, and most important of all, keeping the museum growing, I encourage your support to help keep the history of mountain biking alive. 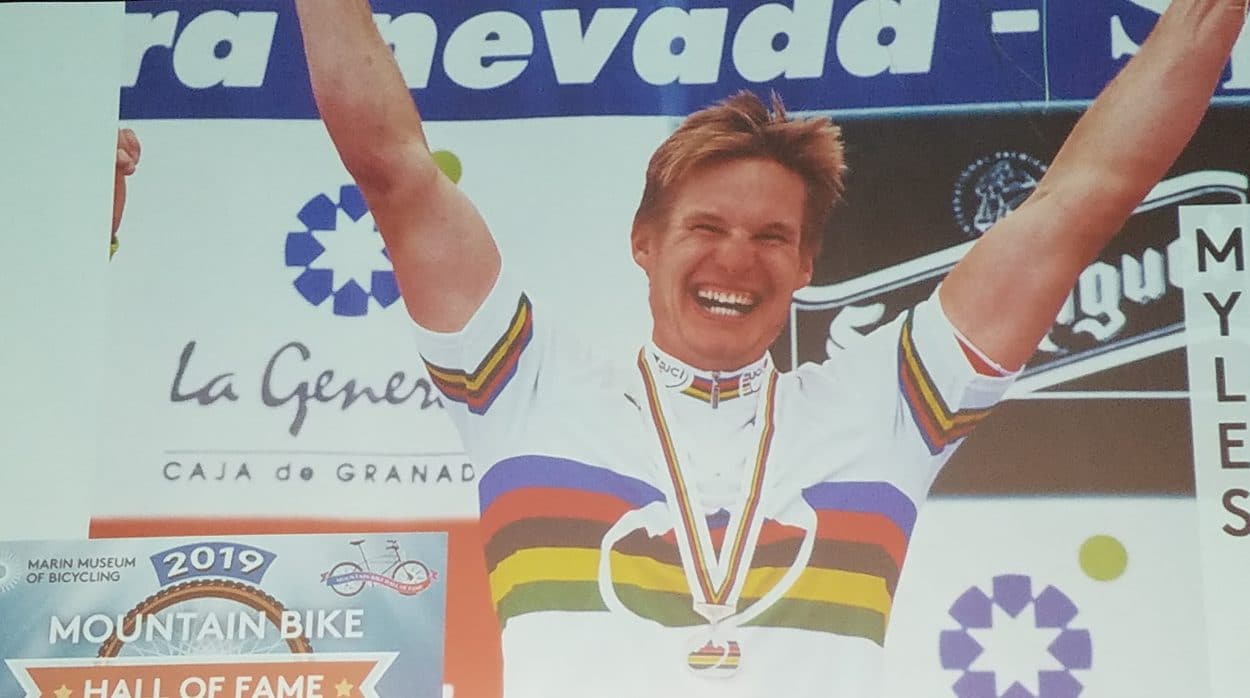 For Myles Rockwell the long trip to his induction  into MBHoF started right outside the Marin Museum’s front door when he was a fat-tired wrecking ball and member of the Marin Outlaw Bikers that called Fairfax home.

“I STARTED THIS MISSION BLIND AND IT TOOK YEARS. GROWING UP IN SAN FRANCISSO I WOULD ASK MY MOM TO TAKE TO ME THE MOTOCROSS TRACK AND SHE’D  SAY, “LET’S GO GET A CAPPUCINO.”

From his earliest days, Myles knew what he wanted to accomplish in the sport and never stopped expecting that one day it would arrive. He started racing on a Fisher Mt. Tam, had a brief forays on a RAD GP and Boulder full-suspension bikes before getting signed to Yeti Cycles in  1992.  From 1993 to 1995 Myles would go on to win the Mammoth Dual Eliminator twice, the Mammoth Kamikaze and a bronze medal at the World Championships before getting signed to the powerhouse Volvo/Cannondale squad.

“THE FREEDOM MACHINE – THAT’S WHAT THE BICYCLE WAS TO ME.”

By 2000 he was astride a factory backed Giant DH when he traveled to Sierra Nevada, Spain to claim the rainbow jersey. In the  years since Myles has started youth cycling program, Rockwell Ridewell, and continues to ride and inspire. 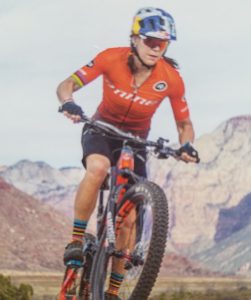 As over-the-top as it sounds, as much of a WWF moniker you may think it is, the title of “The Queen of Pain” is accurately encapsulates  the career of Rebecca Rusch. And yet at the same time it falls so totally short. As the MBHoF was considering her nomination, time and time again, we reminded  ourselves, this woman is about SO much more than all of her notable racing accomplishments. Simply put, Rebecca has become one of the most important ambassadors the sport has ever known.

“I DON’T CONSIDER MYSELF A MOUNTAIN BIKER…I CAN’T DO A WHEELIE!”

The Sun Valley, Idaho native never seems to rest, nor say no to a physical challenge that most of us would never consider. To watch Ned Overend get visibly squeamish  as we sat watching the video presentation of Rebecca working out at the Red Bull training facility was in itself worth the price of the night’s admission!

In addition to her four Leadvillle wins, three 24 solo world championships, Dirty Kanza wins, and multiple other endurance wins/records, last year Rebecca put a wrap on a feature documentary, “Blood Road” which found her tracing the steps to where her father’s plane crashed during the Vietnam war. In her spare time she has also created a ever-growing gravel bike event, Rebecca’s Private Idaho.

DEREK WESTERLUND
While MBA’s own John Ker was inducted for his years of service shooting millions of eye-catching still photos, Canadian filmmaker Derek Westerlund was inducted for his decades long effort of capturing hair-raising, big-air action that’s been the basis for all things freeride with his series of New World Disorder films.  Derek was also instrumental is making the Red Bull Rampage and Crankworx the attention -getting freeride extravaganzas that they are.

Derek cut his filmmaking teeth in some of the most remote, far-removed arenas of Canada that he could find.

‘THERE WERE NO HORSES, NO RICH PEOPLE – WE JUST RODE OUR BIKES EVERYWHERE!”

There really aren’t enough words to describe Derek’s vision and creativity – so here’s a short video.

TIM NEENAN
Just as Henry Ford’s Model T is credited for igniting the auto industry despite plenty of competitors, most everyone points to the Specialized Stumpjumper as the bike that  really got the ball rolling for production mountain bikes. Tim Neenan was the guy who not only helped design and conceive of that bike, but he actually built the first version which were later copied in Japan for sale to the public. 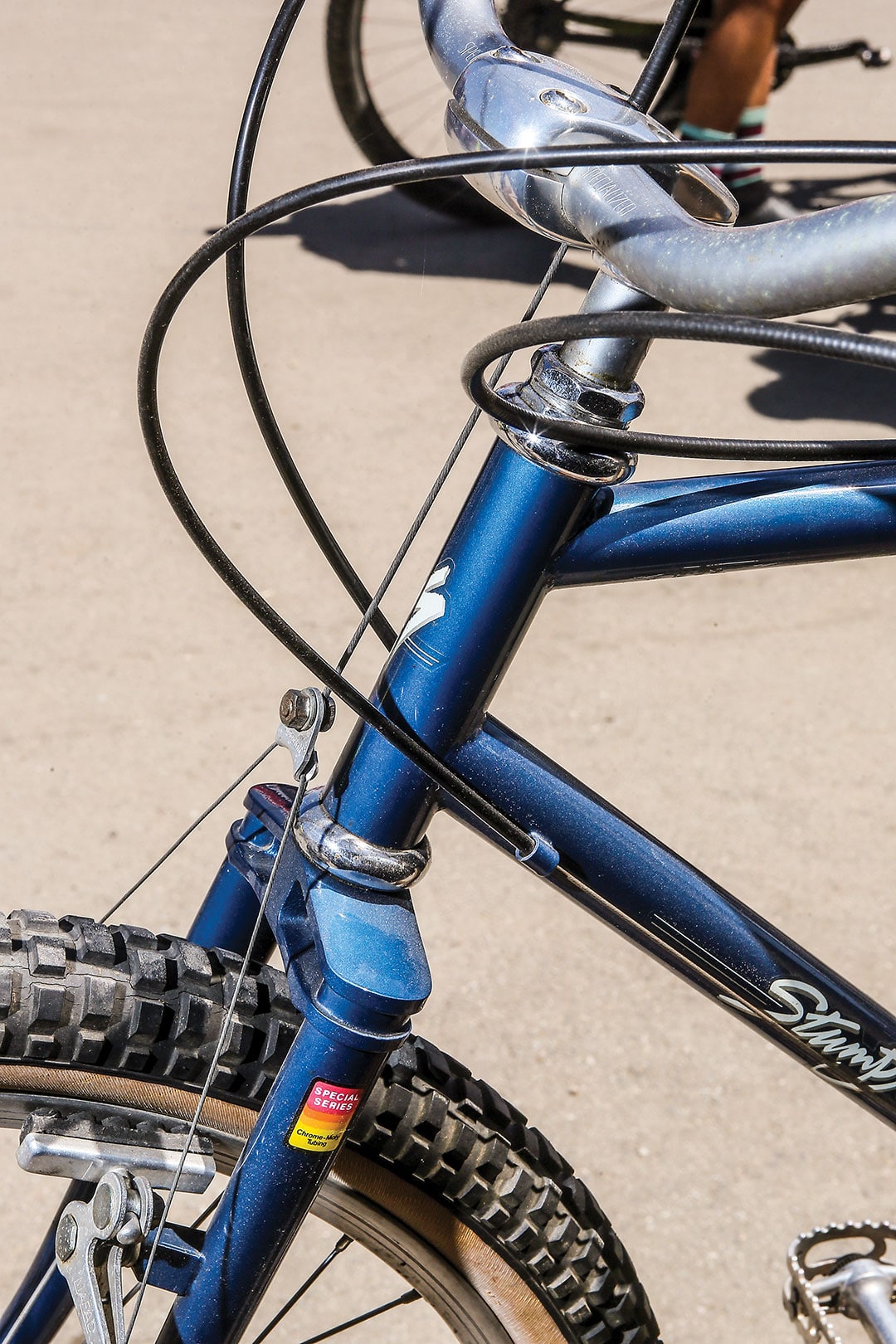 From its fully rigid, steel frame beginnings in 1981, eventually, the Specialized Stumpjumper would morph into one of the best selling XC bikes ever.