It was a day for the home nation and flat pedals at EWS Loudenvielle, as Pivot Factory Racing’s Morgane Charre and Commencal Enduro Project’s Alex Rudeau rode to victory in front of a vocal French crowd. The pair mastered a series of steep Pyrenean trails left slick and treacherous by significant rain. The French had further reason to pop the Champagne with Isabeau Courdurier’s second place in the final round of the series crowning the Lapierre Zipp Collective rider as 2022 series champion. 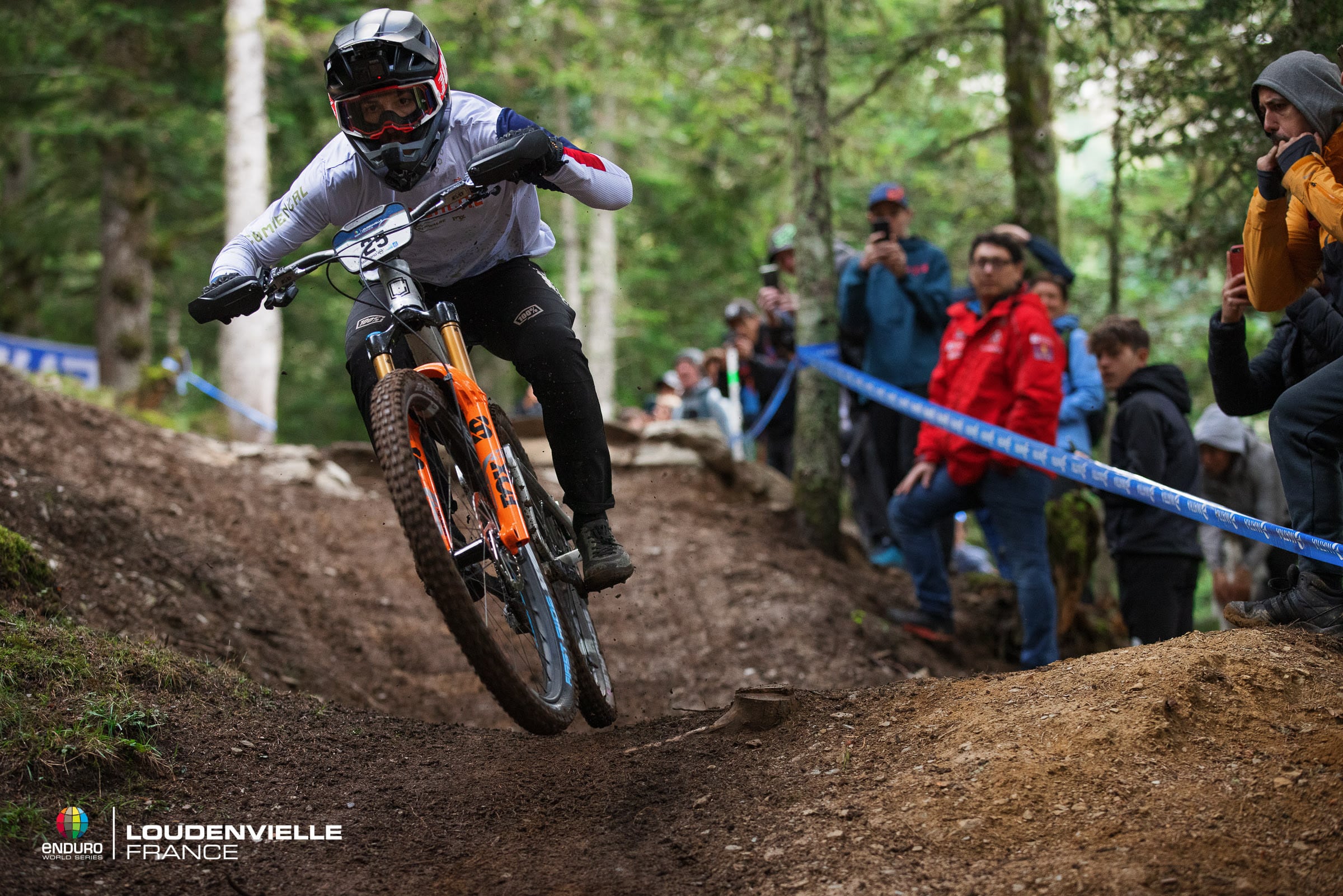 Isabeau Courdurier is champion for a second time after landing the title first in 2019 Pic: Dan Hearn

In the men’s title battle, a sixth place for Canada’s Jesse Melamed was enough to secure his debut series title. Injured Melamed of Rocky Mountain Race Face was pushed hard by his equally-battered rival Richie Rude (Yeti/Fox Factory Team) who ended the day in seventh and as runner-up in the title race.

Rain on Friday and then again on Saturday left the steep and testing tracks of EWS Loudenvielle almost traction-free and there were crashes aplenty as riders pushed hard. Morgane Charre used all her flat-pedal downhill skills to master the Pro Stage on Saturday, a win that would be one of four she would grind out in the six-stage race to emerge nearly 10s ahead of a remarkably-consistent Isabeau Courdurier. Indeed, Courdurier, whose season was nearly ended by a horrific foot injury in July, was metronomic in her approach, she knew she had to ride smoothly and do little more than finish, and that approach paid dividends, spiriting her to victory in the two stages that didn’t go Charre’s way.

As Courdurier’s closest title rival, Charre pushed hard, but so did 2021 EWS champ Melanie Pugin of BH Enduro Racing Team, who finished every stage in the top six. And that was good enough for third on the day. Israel’s Noga Korem (GT Factory Racing) was another rider who found form with her best result of the season to finish in fourth. Harriet Harnden of Trek Factory Racing finished fifth with a result that was good enough to clinch her third in the 2022 series. The result saw her win the Battle of the Brits in 2022, leapfrogging both Bex Baraona of Yeti/Fox Factory Team, who finished the race in 18th and Cannondale Enduro’s Ella Conolly, who was sidelined by a crash in the Pro Stage on Saturday. 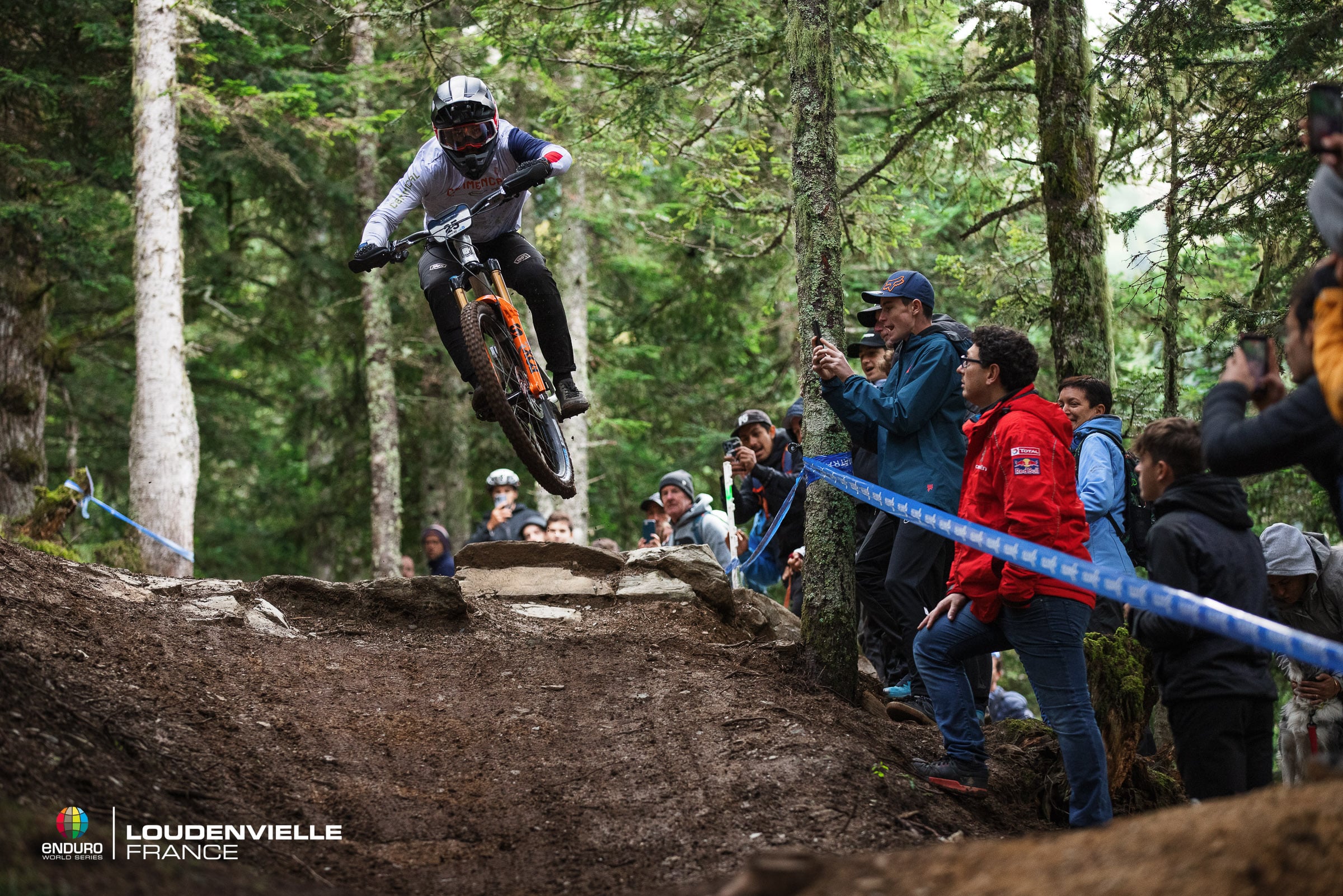 Alex Rudeau’s win was a debut for the Frenchman, but he has already won an EWS-E in Valberg in July this year – also on flat pedals Pic: Dan Hearn

In the men’s race, young Frenchman Rudeau found his flow with a remarkably consistent performance which saw him place within the top five on every single one of EWS Loudenvielle’s six stages. With a stage win on the first test of Sunday, the hugely slick Courtalets, Rudeau looked in charge on his flat pedals from the get-go. He followed that up with two thirds, a fifth, and a second on the final stage of the day to hold off an in-form Martin Maes of Orbea FOX Enduro team and a hard-charging Jack Moir (Canyon Collective) – the 2021 EWS champ. A win for Moir on stage four and then a second on five saw the Aussie go into the final stage just 4.28s behind Rudeau, but the ice-cool Frenchman held his nerve to take a further 2.6s out of the Aussie who was himself leapfrogged on the last stage by Belgian Maes who came second and secured himself the third spot in the title race. In his best result for some time, Specialized Racing’s Charlie Murray came home in fourth after winning the fearsome Queen Stage – Nabias – S3. Pro Stage winner Youn Deniaud came home a creditable fifth. 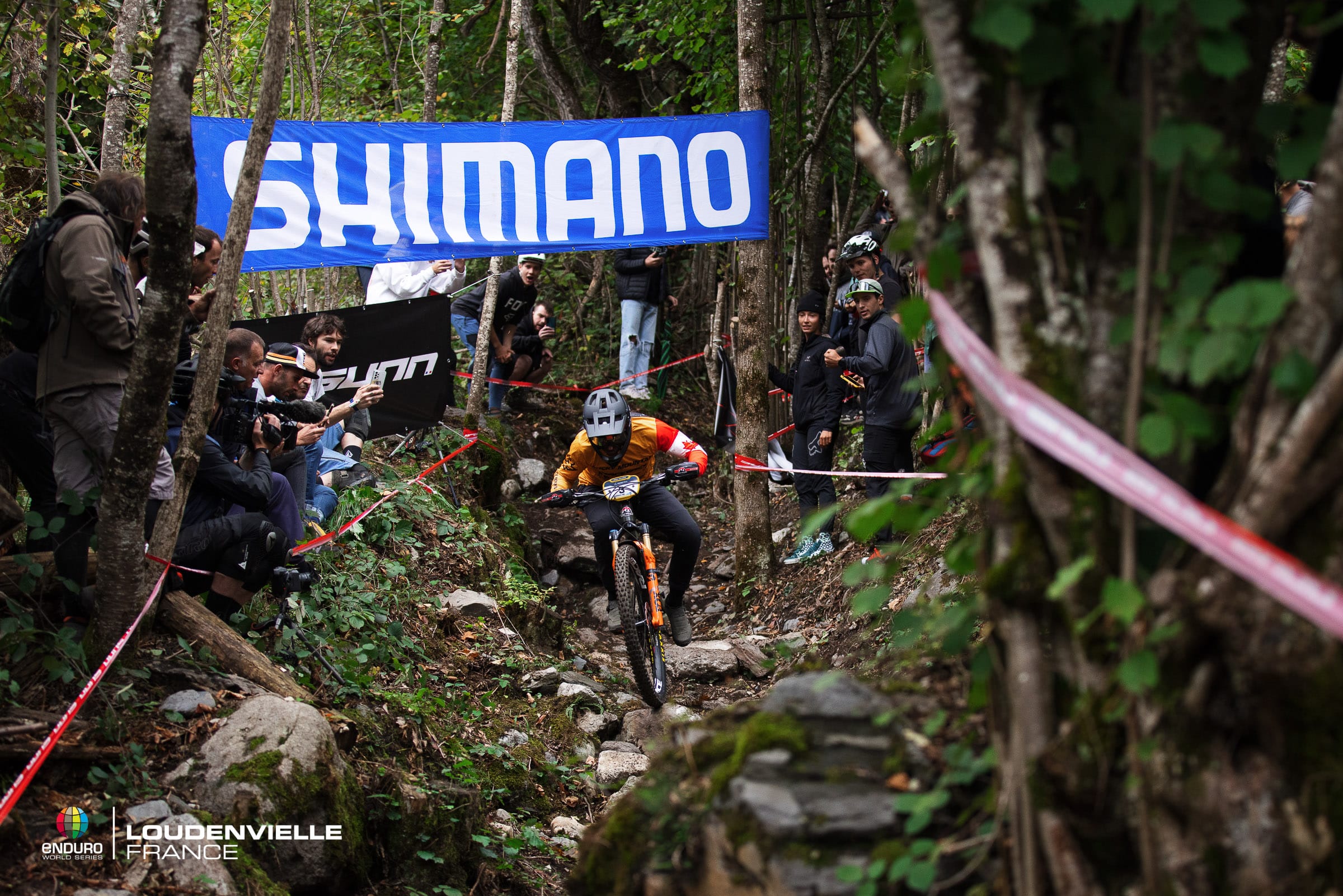 Although Jack Moir had a slow start to 2002, he managed to surpass 3,000 points and take fourth place in the series. Pivot Factory Racing’s Eddie Masters had a superb season to finish in fifth.

In the U21 Women, it was an emphatic win for Emmy Lan of Norco Factory Racing ahead of  Germany’s Helen Weber of Raaw/Levelnine Gravity. The series leader going into the race, Italy’s Sophie Riva, was nearly two and a half minutes back. The Canadian won five of the six stages and ended up wresting the title from 2021 champ Riva by 150 points. Chile’s Paz Gallo Fuentes was third.

In the U21 Men, it was a Loudenvielle win for France’s Lisandru Bertini of Lapierre Zipp Collective, Canada’s Seth Sherlock was second aboard the Intense, and France-based Brit Jack Piercy of Commencal Les Orres Team was third. The 2022 series was won at the last round – EWS Crans-Montana – by Luke Meier-Smith of Propain Factory Racing. Sherlock did enough to secure second in the 2022 championship and his countryman Emmett Hancock was third.

The Master 35+ Women saw a dominant display by Czech rider Fejola Stepanka Nestlerova. A clean sweep of stage wins meant she finished the day just under three minutes up on Kiwi rider Melissa Mops Newell. Sandra Thomsen of Denmark was third. Nestlerova also takes the 2022 title, with Newell in second and Thomsen in third.

Round eight of the series in Master Men 35+ saw the UK’s Ian Austermuhle take his third win of the series but it wasn’t enough to overhaul France’s Karim Amour in the title race. Although more than a minute adrift of the Hope rider, placing second on the day was enough for 47-year-old Amour of BH Enduro Racing Team to clinch the title, his fourth since 2017. Third on the day was Spain’s Mauro Gonzalez Fontan. A sixth-place finish by Denmark’s Mads Weidemann was enough to land him in third place in the championship.

Team of the day was Commencal Enduro Project ahead of Lapierre Zipp Collective. Pivot Factory Racing took the team title for 2022.