Next Generation Stingray: The Mongoose Massif

You probably don’t remember your first day of school. Or the party your folks threw for your 12th birthday. Or your first kiss. But, you remember your first bike. It created an emotional connection strong enough to form an indelible memory that will probably be there long after you’ve forgotten your best day of mountain biking. It may be the freedom a bike represents, the self-confidence it builds when you remove the training wheels, or just the exhilarating feeling of the wind in your face and the earth rushing past below your pedals, but that first bike is an important moment in everyone’s life.

Mongoose understands this very well. While the Schwinn Stingray is considered the most enticing “first bike” of all time, Mongoose hit a home run with its Mongoose Californian at the beginning of the BMX craze. Looking to repeat the runaway success of that bike, the Mongoose brain trust has come up with the Mongoose Massif mountain bike. 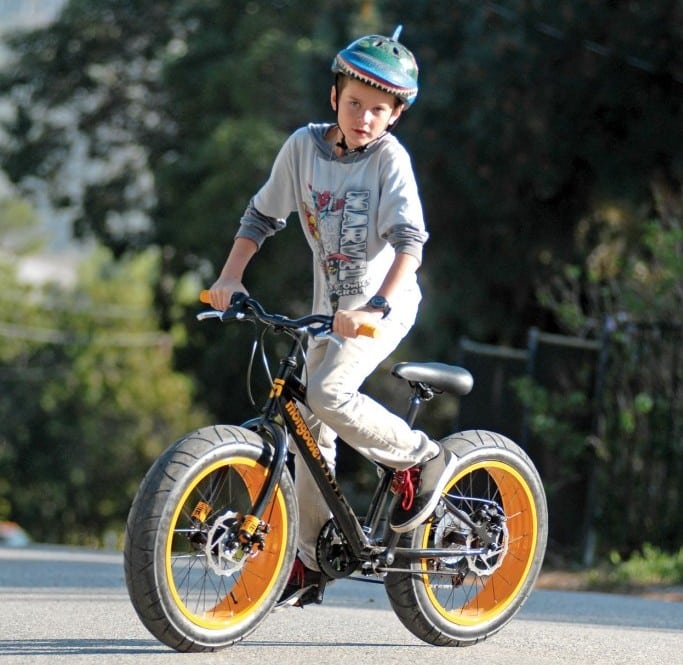 The Massif, a word not found in the English language until now, is sold through select Walmart stores and directly from their website for the amazingly low price of $197 (assembly required). The bike weighs 39.7 pounds, has mechanical disc brakes, and a 7-speed Shimano drivetrain with gear selection accomplished by the rotation of a twist shifter. The tires are non-branded 20-inchers with a width of 4.5 inches. The 4-inch-wide rims are painted yellow to match the graphics of the black frame (that uses steel and aluminum tubing).

Most important for a kids’ bike, the standover height is a mere 21.5 inches. Mongoose gives the Massif the ability to grow along with your young rider. The seatpost is secured with a quick-release clamp that allows the saddle to be lowered to 24 inches or raised as high as 28.5 inches off the ground. 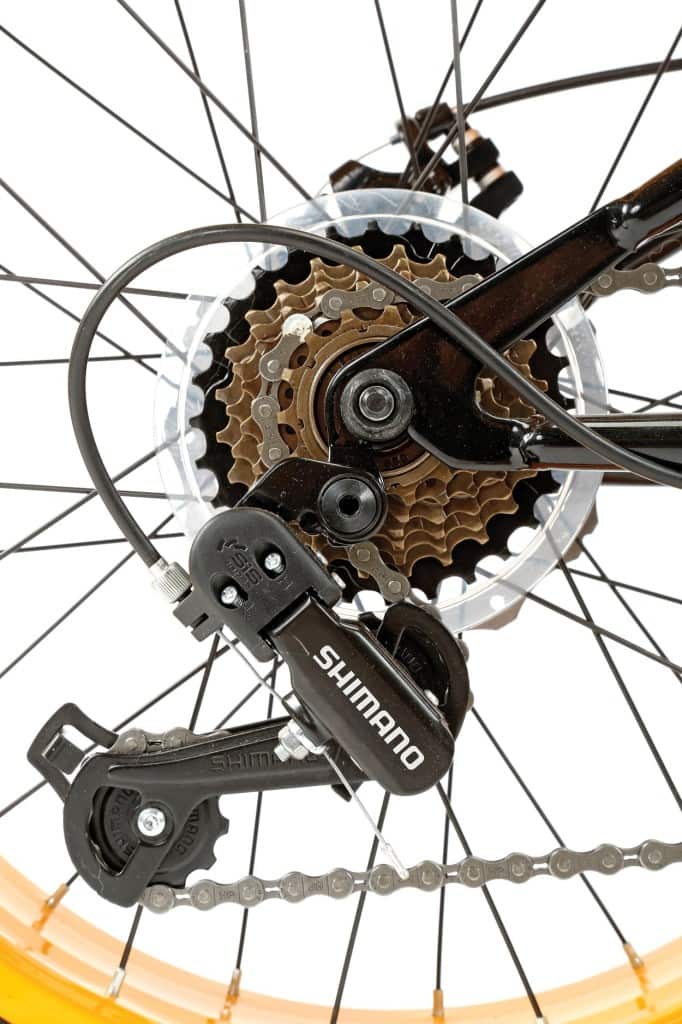 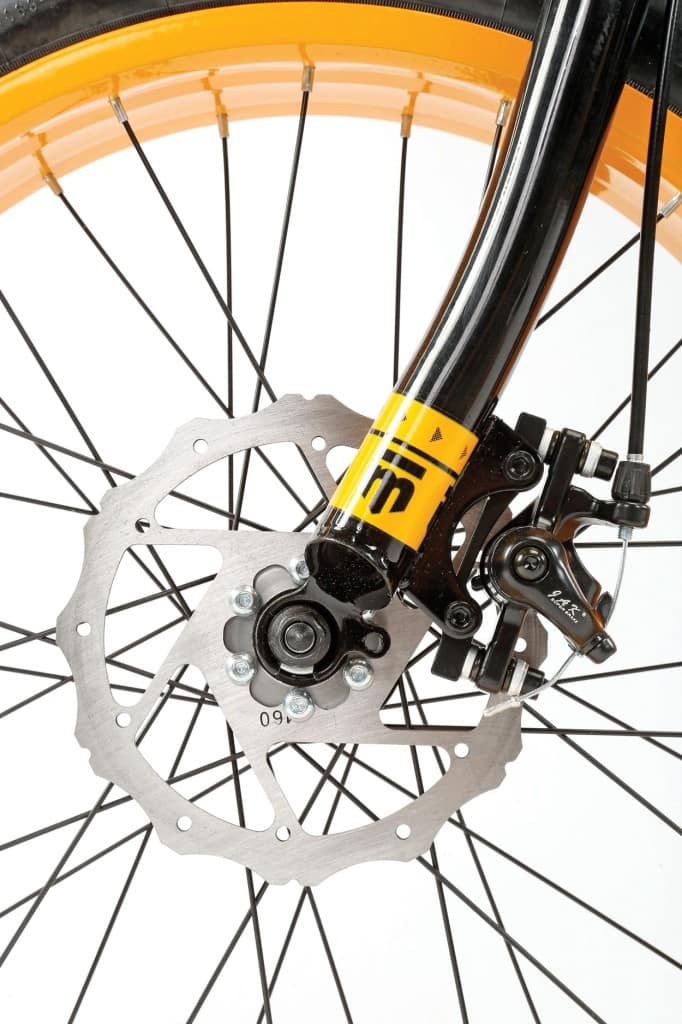 This Mongoose/Walmart collaboration has already accomplished mission one: create an emotional connection between bike and rider. Nobody, young or old, could look at the Massif without smiling. This is a bike that elicits wonder, desire and excitement. It doesn’t look like any other kids’ bike. It is a whole new thing.

Walmart presents the Massif as a mountain bike, but let’s be real. The tires look more like those made for Grand Prix motorcycles raced on MotoGP circuits than anything ridden off-road. While the big tires do a fair job of dealing with trail chatter and loose trail surfaces, Luke, our test pilot, had the best results riding pump tracks and on paved bike paths. The low-hanging derailleur is too vulnerable to rocks and roots for serious off-road trails.

On smooth flat surfaces, the Massif gets going better than you would expect from such a fat-tired creation. One or two out-of-the-saddle crank rotations and the Massif is rolling with a momentum that allows the rider to back off the power and still maintain a nice clip. Luke found the twist shifter action to be easy and accurate, and it took no time at all to get used to the stopping power of the mechanical disc brakes. Luke found the Massif to crank corners like, well, a mini GP motorcycle.

The seat top separated from the seat rails any time the bike was lifted by the saddle. We would suggest replacing the saddle with a better quality model. We didn’t have any other mechanical issues during our review. The bike proved to be a solid performer. 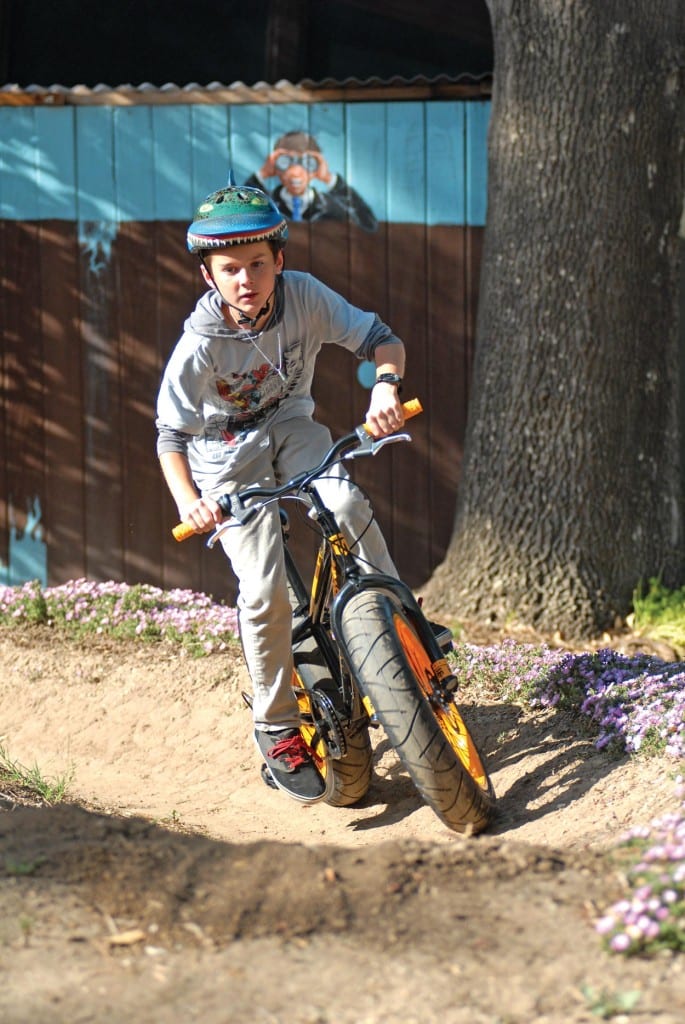 We found the Massif to be a very capable kids’ bike that turns heads and should encourage youngsters to get off the couch. Used sensibly on flat or rolling, paved bike trails, the Massif is going to provide your youngster with a lot of great memories not soon to be forgotten.