NICA Team Of The Month

NICA Team of the Month 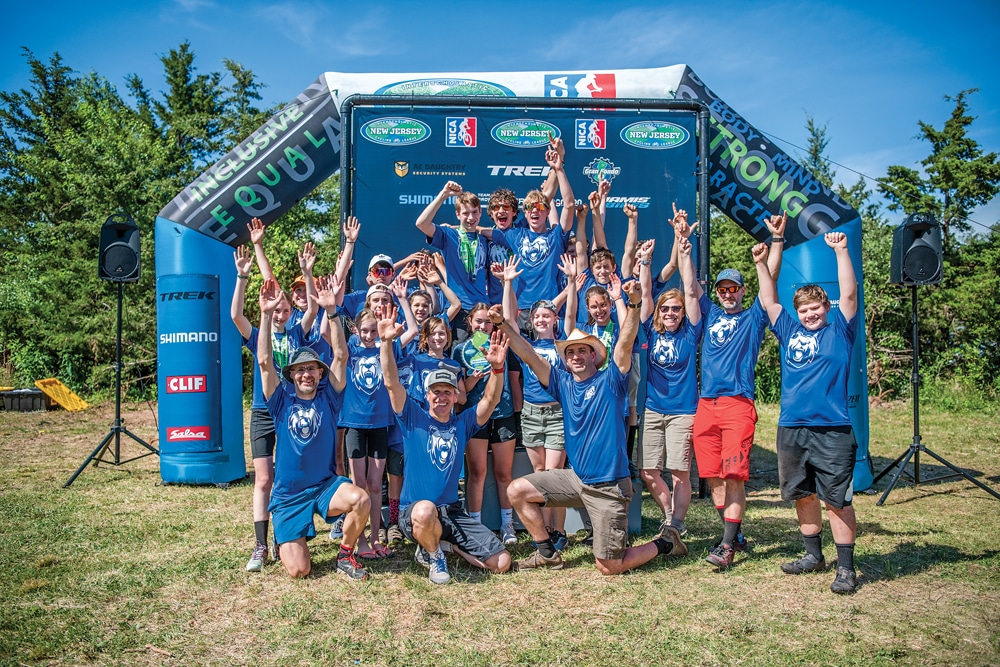 One of the most important developments to come out of the world of USA mountain biking has been the explosive growth of high school racing. This month we reached out to coaches Jay Huggins and Michael Moskowitz to learn about the Highlands Composite Racing Team in West Milford, New Jersey. 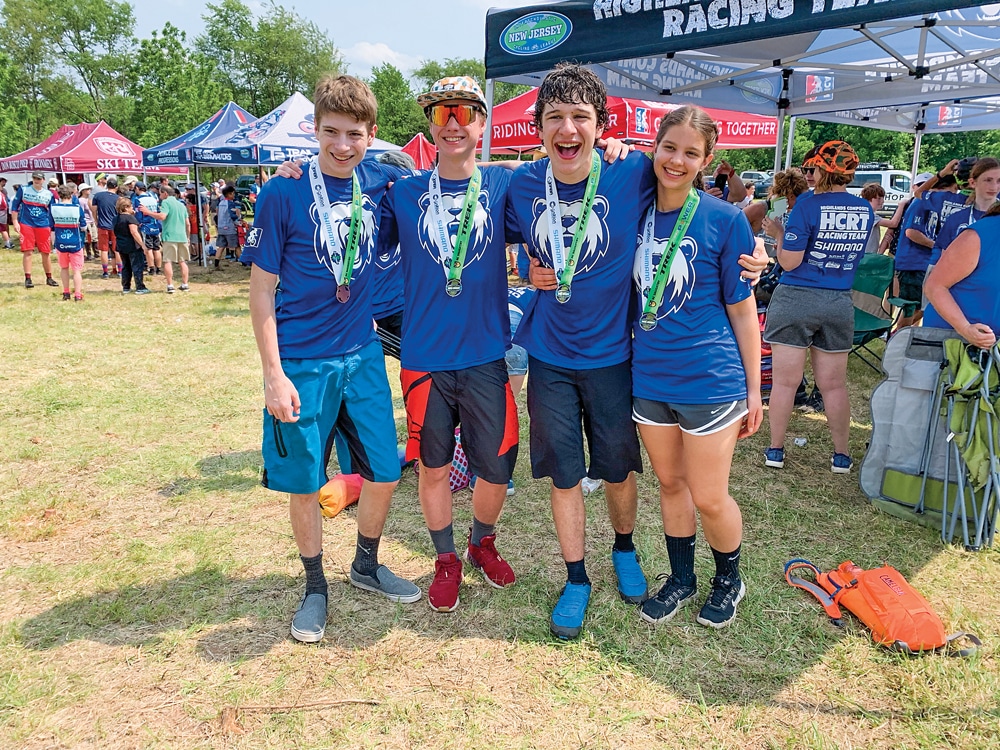 Where did the team name come from?

We are a composite team consisting of student-athletes and coaches located in and around West Milford, New Jersey, an area known as the “Highlands.” We are essentially in the northernmost part of the state where our biggest threats are bears (hence our logo) and coyotes. Our area is also known for having some of the toughest trails in the country.

What this means for our riders is that HCRT riders are some of the most skilled young mountain bikers you will ever see. Our head coach, Mike Moskowitz, is constantly on the lookout for NICA-compatible trails for our kids to ride. As a side note, we are also known as the “T-shirt team from the hills,” and these T-shirt-wearing kids just won the 2019 New Jersey NICA Championships. 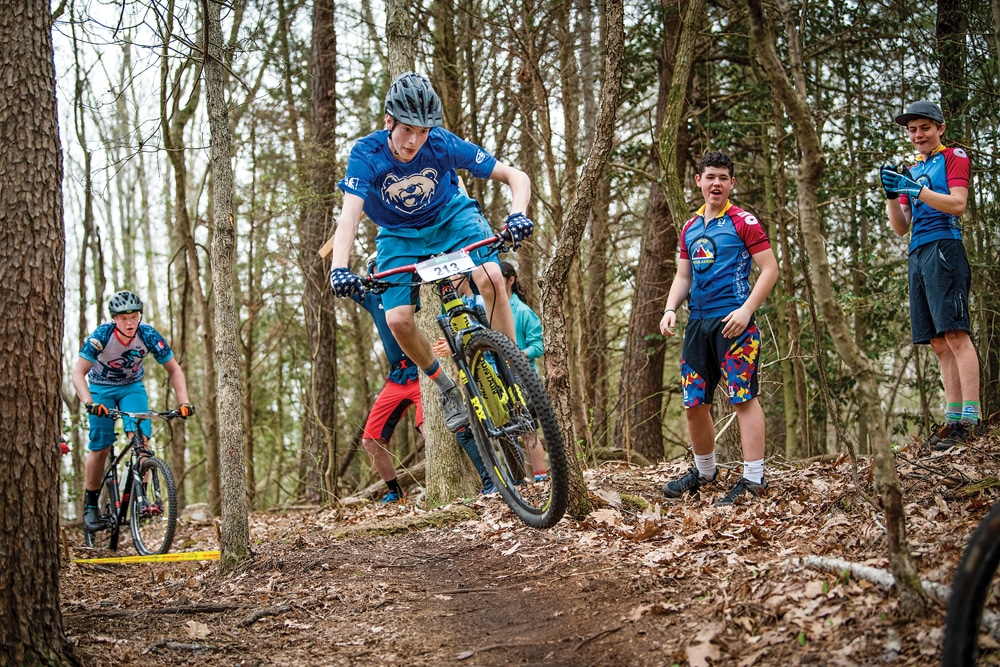 We race in the New Jersey Interscholastic Cycling League (NJICL). 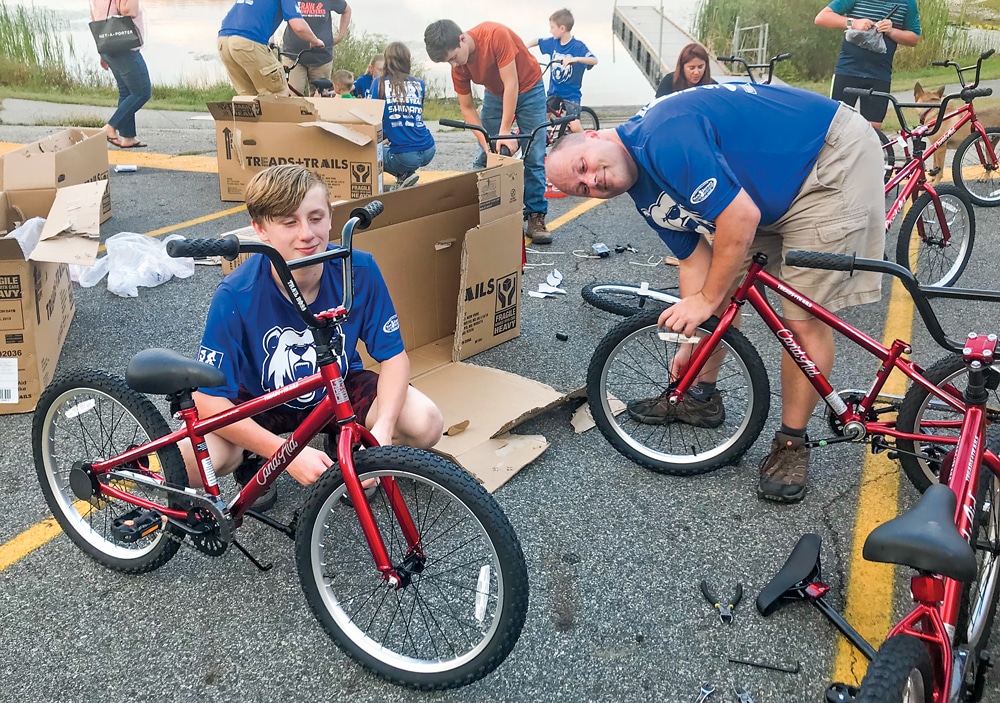 The team was started the same year the NJICL was formed—2016. I was in the first team-organizational meeting, and as an ex-professional mountain biker from the ’90s, I have personally experienced how mountain biking can positively affect one’s life. From day one I told the league that my team was going to have fun, learn critical thinking and wear T-shirts. This was, and always has been, one of the unique qualities of the team. The kids feel like it’s just fun and that they are considered underdogs because of their lack-of uniform. The T-shirt theme encourages them to look inside themselves for motivation and builds camaraderie.

From day one, the mission statement of the team was to be “the nicest kids on the trails and nicest kids on the podium.” The next decision our team made was to remove any financial barriers to joining our team. There are no team dues, the T-shirts we race in are free to all riders, and roughly 20 percent of our team races on donated or loaner bikes. 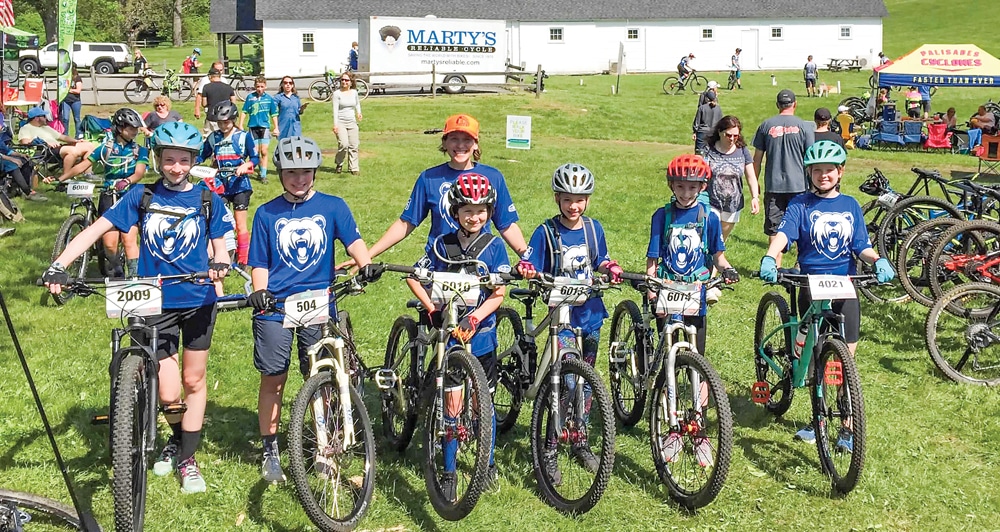 Regardless of how the team performs at the races (even though we are the reigning NJICL team champions), what matters most is how the team behaves out on the trails. If we encounter another trail user, such as a hiker, we expect every HCRT member to greet the hiker in a friendly manner and either slow or stop as they pass. In the opinion of myself and our awesome coaches, victory is developing polite and nice stewards of the sport.

We are currently at approximately 30 student-athletes, a third of which are girls. Our goal for this year was to have a 50/50 split, and we heavily promote the sport to girls in hopes of achieving this goal. We also have eight amazing coaches, two of whom are female. 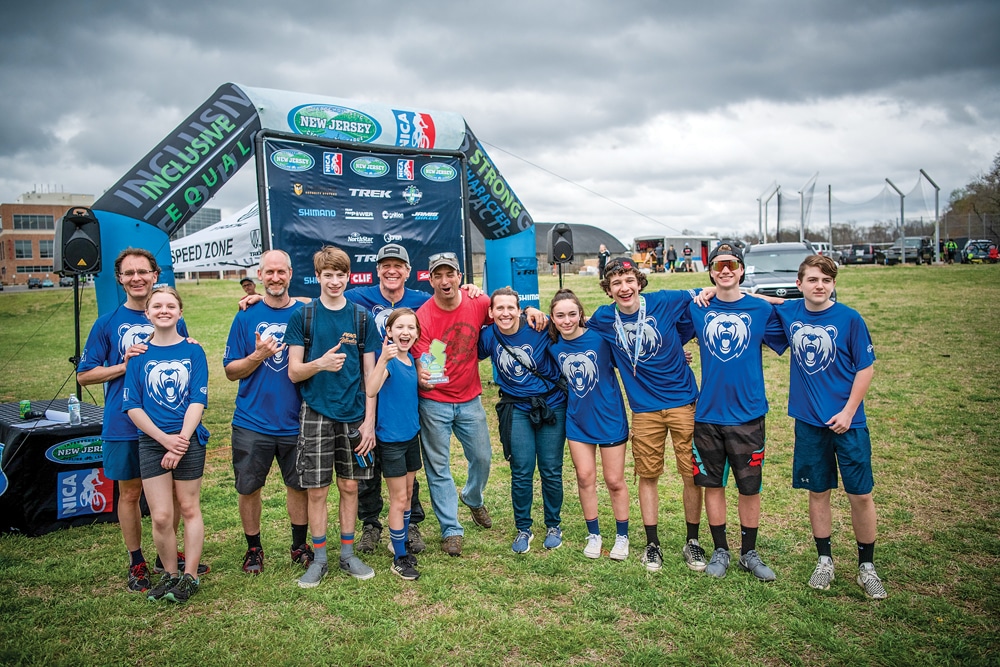 The greatest spotlight of our team is the support the teammates give to one another. On HCRT, every athlete is a superstar, and you can often see the entire team (whoever is not racing at the time) gathered together, cheering so loud it’s nearly deafening.

Do you have middle school racing?

Yes, we do, and those kids rule! Half of our team are middle schoolers. Their enthusiasm is off the charts, and their learning curves are insane. Usually, head coach Mike Moskowitz and I will choose to join the middle schoolers on the training rides because it is so amazingly fun. 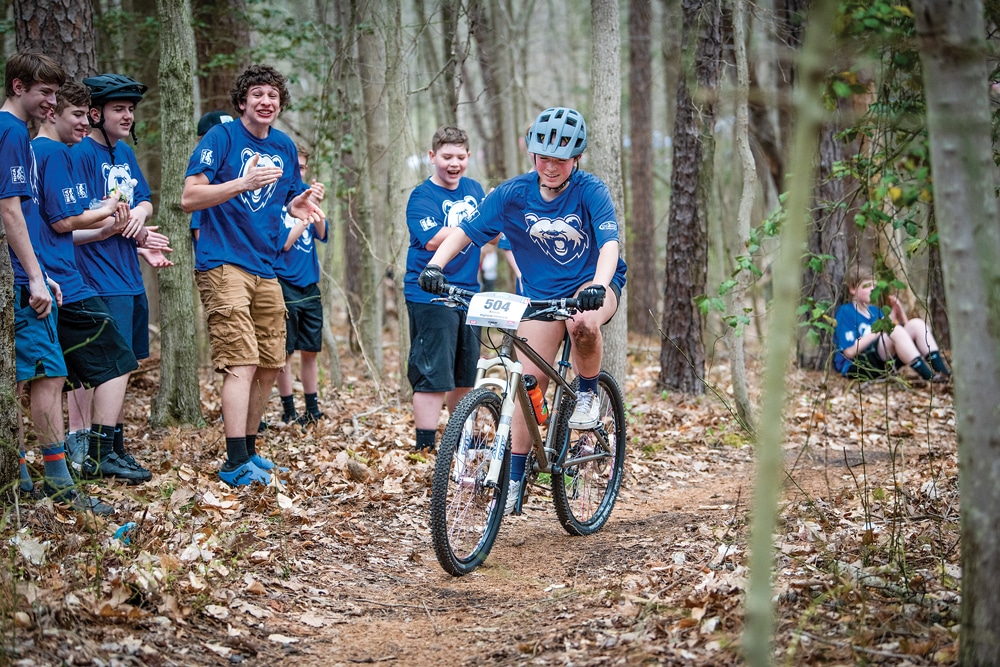 The team’s favorite course is Lewis Morris in Morristown, New Jersey. It is the closest course to where we are located (still an hour away) and tends to be the most technical. If there were ever a NICA Red Bull Rampage, that is where our athletes would really shine.

When does your season start. Why?

NJICL is a spring league, so the racing starts in April. That means our preseason training begins in December, usually in the snow and freezing weather up in the Highlands. Unlike many other teams, we do not do indoor training as part of our regimen. As a matter of fact, the use of the word “training” is not allowed to be used by our team. HCRT rides and that is it. 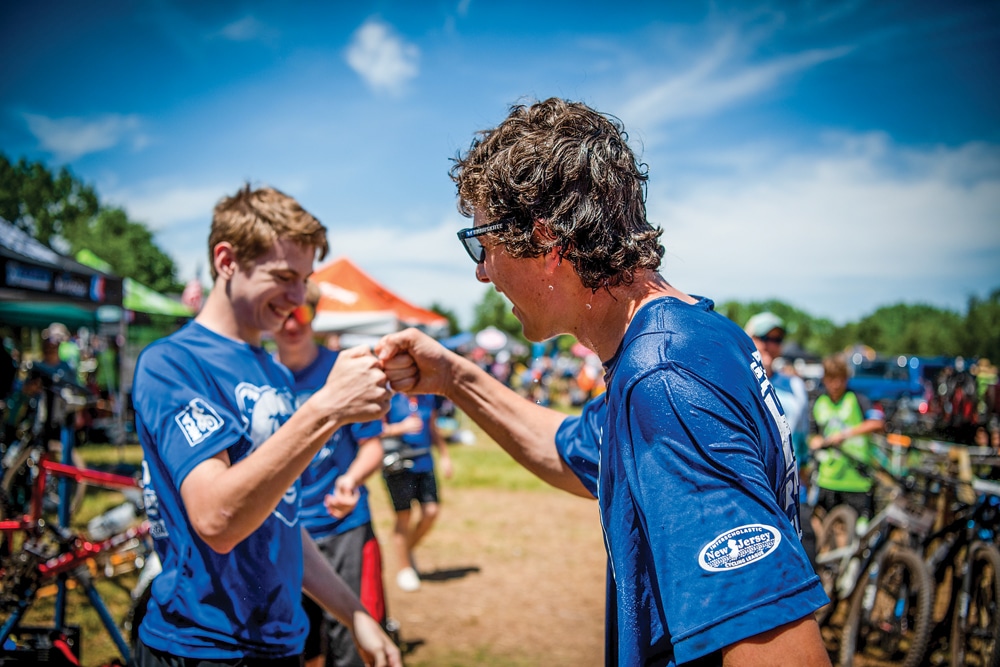 We have refunded some of our sponsors’ donations due to coronavirus to help their businesses through the pandemic. We are also planning on doing more to help those sponsors once the region opens fully for business. We treat our sponsors as well as we treat the trails we ride on.

Coach Eddie Ceccolini is a multi-time NJ state champion and often rides for two to three hours before our group rides.

Coach Ed McDermott is a local police officer, and his training for emergencies and other protocols is of great comfort to the new MTB parents.

What has the team been doing during this virus crisis? Were you able to get out a little as a team for some fun rides when it was okay?

We have not been able to ride as a team, and we all miss it! As I mentioned earlier, we don’t train, so this hasn’t affected us too much. The kids don’t need any added stress during a pandemic. 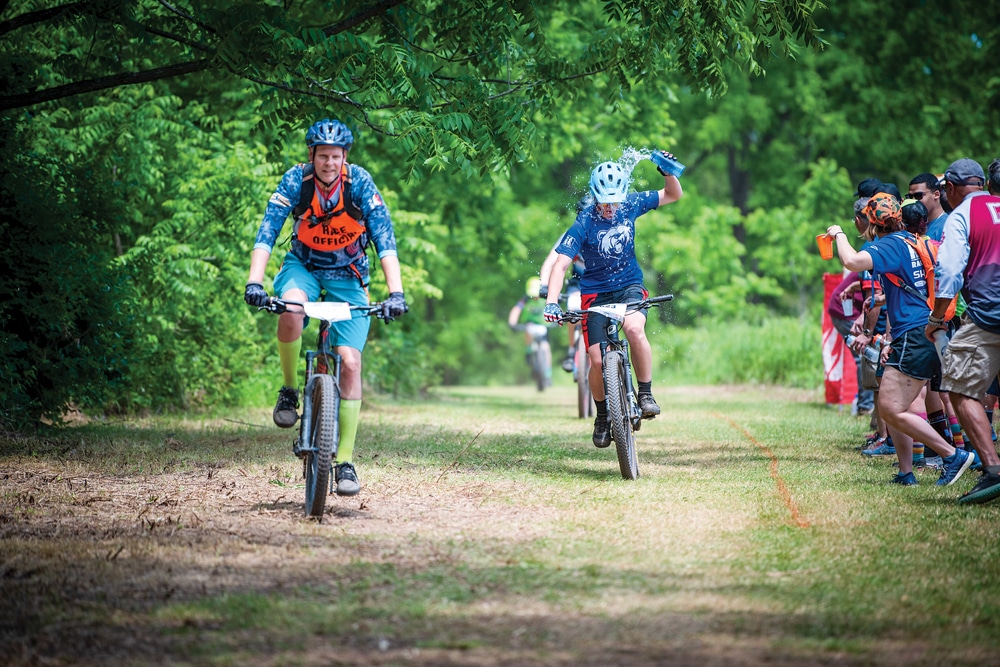 Eddie McDermott is awaiting a surgery, and we wish him well. There are team moms and dads who make all of this possible. Zac Antlitz and his dad built bike racks painted HCRT blue that are large enough to hold 40 bikes. Alex Van Dyke, Rocco Mussina, Danny Janz, Mike Kelly and Keely Sherlock are new to the team and using this as an opportunity to get some miles in.

Racheal Everett will be continuing her hill sprints, while Julia Emerson searches out some new singletrack. Sam Spoelstra has been with the team since day one, and although we always forget him in our Instagram posts, it’s important that our team recognizes him here as he continues to ride and motivate others to ride as well.