Niner named this bike the Jet for a reason

The first Niner Jet 9 took flight in 2007. This model has been carried through for just a little over 14 years, getting modern updates along the way. The Jet serves as Niner’s short-travel trail bike. Here is the latest version of the Jet 9 RDO with some noteworthy changes from the last one we tested in our December 2018 issue.

Consistent with modern geometry trends, this new Jet 9 RDO is longer, slacker and lower than previous versions. In updating the 2018 model, Niner integrated a Flip Chip to allow buyers to change the bike’s geometry. The Jet can be set up in either the high or low setting. In the high setting, the Jet 9 RDO has a 66.5-degree head tube angle, a 76-degree seat tube angle and a bottom bracket drop of 41mm. Located right above the seatstay pivots, the chip can also be flipped to the low setting. This gives the Jet a lower bottom-bracket drop of 8mm and a slacker geometry. It’s only a slight change, but it does change the seat and head tube angles by half a degree for both.

The RDO (Race Day Optimized) carbon fiber frame was made to combine weight savings and strength in places where a rider needs it. Don’t be fooled into thinking that this frame is ultra light because it’s carbon. This design uses flattened surfaces on the top and downtubes, along with beefy cross-members in the rocker link/rear swingarm. As with the Jet 9 RDO’s heavy-hitting enduro sibling, the WFO, these design elements are intended to add strength and rigidity.

The new Jet is on par with current standards and offers the modern features you would expect. The bike has fully sleeved cable guides (mechanics rejoice), smooth/reliable Enduro Max pivot bearings, integrated frame protection, clearance for a 29×2.6-inch tire, Niner’s CVA (Constantly Varying Arc) suspension delivering 120mm of travel, Boost spacing with a 12mm rear thru-axle, and clearance to carry one water bottle inside the frame. A big bonus is that Niner now offers a lifetime warranty on the frame for the original owner.

The Jet (like most of Niner’s bikes) utilizes Niner’s patented suspension layout, designed specifically for 29-inch wheels, which debuted in 2008. The CVA suspension system is named for the path of the rear axle as the suspension works through its travel. It was designed to work with the larger bottom-bracket drops seen on 29ers. To be short and sweet without getting too deep into the suspension weeds—as the system is compressed, the rear axle moves past the sag point in a gradual, constantly varying arc (CVA), upward and inward toward the bike.

The model we tested back in 2018 used a standard shock mount. Now, Niner has decided to use a trunnion-mount shock that adds a bit more width to the frame and linkage. This mounting style has fewer moving parts and is typically stiffer than a standard mount. It also saves space. Ultimately, Niner’s goal with a CVA system is to keep the rear wheel in contact with the ground while moving as freely and independently as possible and mitigating unwanted movement.

For setting up rear sag, Niner has a well-thought-out method that doesn’t use the shock’s O-ring; instead, you can look at the main pivot on the frame that has markings to show what percentage of sag you are using. We liked this great use of space, as it is easier to see what number you land on than to measure the Fox shock. We played around at first but later stuck to a 30-percent sag with the compression wide open during most of our time on this bike.

From the very first ride, we noticed that the geometry felt comfortable with a more relaxed position over the back of the bike than in the previous iteration. The high setting of the Flip Chip was best for efficiency’s sake, but for most of our riding, we opted to keep the bike in the low position. In either setting, the Jet does not have an aggressive feel like that of a dedicated cross-country bike. Although there is a more relaxed body position, the CVA is a supportive platform when pedaling seated. It kind of plays a trick where there are moments of cross-country-like pace with power efficiently being transferred. The support can still be experienced when pedaling out of the saddle, even with the shock fully open. There were some sections (mostly the smooth steep punches) where we’d stop and reach down on the shock to add compression damping. No doubt, the 2.6-inch tires added heaps of traction on loose terrain; however, they do sacrifice rolling resistance for long, smooth climbs. The bike feels like a mix between a cross-country and trail bike. At the end of the day, it can be ridden quickly uphill to chase a podium at your local weekend race, but the Jet is better suited to getting to the top quickly than taming a descent.

The Jet has a short and playful rear end considering its 2.6-inch tire clearance. We could get back over the rear and feel confident. The frame stiffness and lack of flex are carried over from the climbing side. This can be a good or bad thing, depending on your riding style. The suspension was just plush enough for moderately technical terrain and progressive enough for popping around flow trails with some smooth jump sections. We were surprised how well it could take bigger landings or drops, but there is a maximum send level you should attempt. Some riders felt a slight tendency to blow through the travel on the bigger landings and drops, so we added a volume spacer to the air chamber of the shock to make it more progressive.

The Jet can manage rough trails with confidence. It can also spice up a line choice, but there is a limit to what this short-travel trail bike should be pointed down. Simply put, it’s not an enduro machine, nor is it meant to be. Some of this will ultimately depend on the rider and how far he is willing to push his skills, but if the rider is asking for a fun time, the Jet will get the job done.

It’s hard to argue with the spec of our 4-Star build, as it is set up with just about everything that our wrecking crew prefers to run. Yes, weight can be saved with a carbon wheelset, but the alloy DT Swiss XM 1700 is a tough set of wheels and a great option for the way this bike is designed to be ridden. There is always room for upgrades, but the performance gains would be minor for most riders.

Niner named this bike the Jet for a reason. It’s a lightweight and very versatile trail bike for most riders, but it will take some time to dial in your preferred setting for where you ride. The bike is darn stiff and supportive for efficient pedaling but with just enough travel to put a smile on your face for the descents. If you are looking to get an efficient-pedaling trail bike with enough travel to handle just about any terrain you put it up against, the Jet 9 RDO is a good option to have on your short list of possibilities. 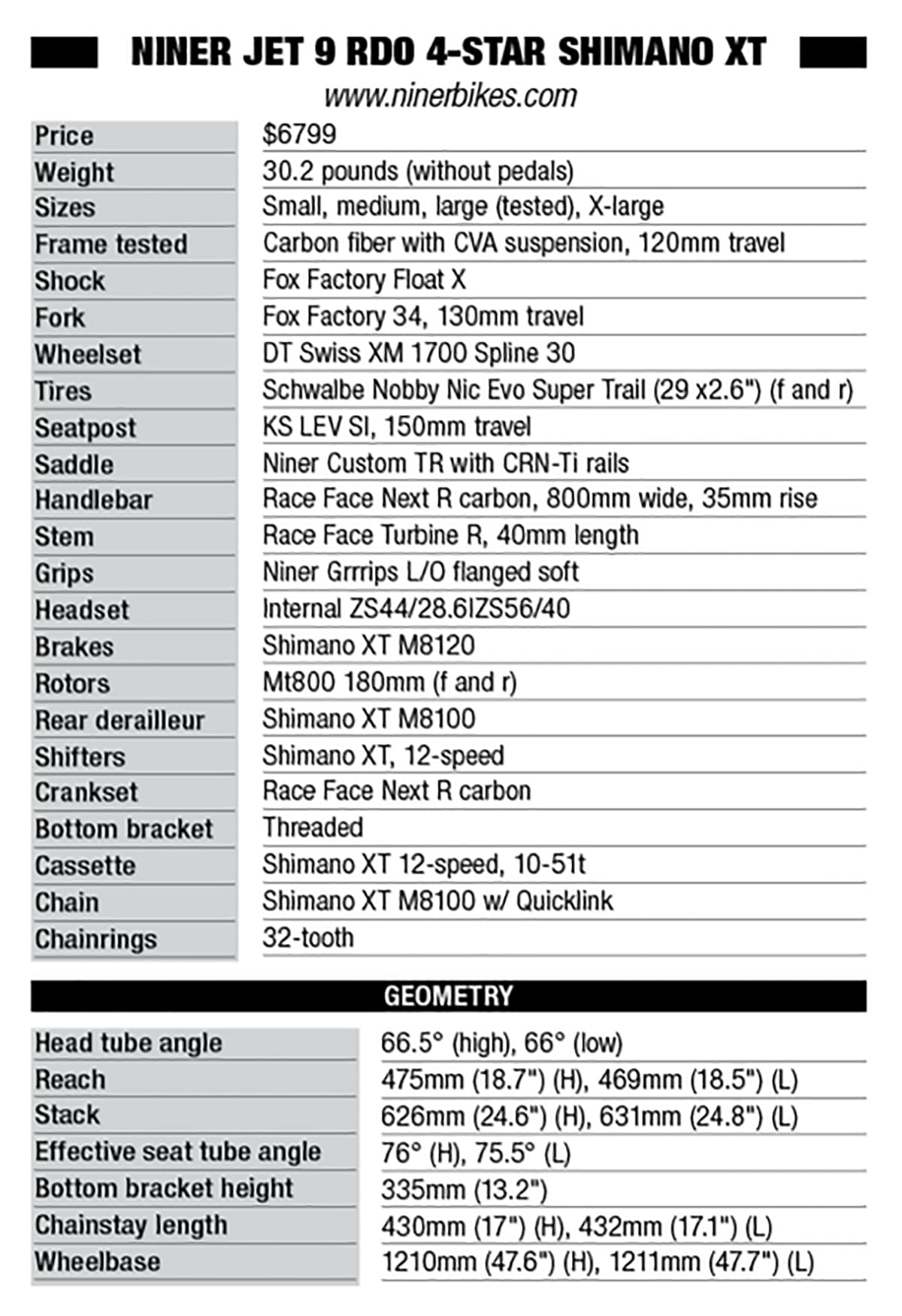