A bike made for heavy terrain and flat out speed.

Take a moment to flash back to 2009 when long-travel 29ers were almost nonexistent and exceedingly hard to find. One of the first brands to take on the challenge of producing such machines was Niner. When Niner’s WFO (Wide, Full Open) 9 was revealed to the public in 2009, it was presented with a plethora of progressive features never before seen. Some of the diehard fans (known as “Ninerds”) thought the bike would remain stagnant. Now, the latest WFO has been revealed, and it still has the longest travel in Niner’s lineup. Of course, lots of technology has changed in a decade, yet the latest WFO 9 RDO design harks back to its roots.

Sticking with modern geometry trends, this new WFO 9 RDO is—you guessed it—longer, slacker and lower than any of its previous iterations. Niner decided to take the geometry a step further by integrating a Flip Chip. Keep in mind that the Flip Chip settings will dramatically change the character of how the bike responds, but more on that later.

Niner then took the usual steps to increase frame stiffness with its signature Rib Cage struts around the shock. These struts are said to reduce torsional flex at the bottom-bracket area. Additionally, Niner flattened the top tube and downtube, widened the main rocker-link pivot and beefed up the rear triangle. Niner also used cross-members in the rocker link and swingarm to help with strength/rigidity.

The new WFO has all the modern necessities (plus some extras) you would expect. The bike features RDO (race day optimized) carbon, integrated frame protection, full-sleeve internal cable routing, Niner’s CVA (Constantly Varying Arc) suspension, Boost spacing with a 12mm rear thru-axle, the ability to carry a water bottle inside its frame, an integrated “cable cage” above the bottom bracket and clearance for meaty 2.6-inch tires.

Niner offers a wide range of component specs to suit a variety of riders’ needs and budgets. The entry-level (two-star) model starts at $4500, and the top-shelf, five-star build sells for $8000–$10,000. We tested what would be considered a four-/five-star blend. The difference? Our test bike had a few components that are not offered among the builds on Niner’s site. The large-sized WFO tested included a Shimano XT drivetrain with Race Face carbon cranks, an 180mm Fox Factory-level fork and the unforgettable sound of an Industry Nine wheelset. It’s worth noting that this bike only comes in small, medium or large. Sorry to the riders who fit into the X-large category and are above the height recommendation, but you are out of luck on this one. Adding traction to this long-travel beast is the 2.6-inch Schwalbe rubber at the front and rear.

At first glance you might think the WFO looks comparable to its relative, the RIP 9 RDO; however, it soon becomes evident that the WFO is the heavier-hitting sibling on the trail. Noteworthy is the change surrounding the shock. As an example, the RIP needed an L-shaped valve adapter to connect a shock pump properly. Thankfully, this is no longer needed with the latest shock designs from Fox.

The WFO continues to use the first suspension layout specifically for 29-inch wheels—Niner’s patented CVA suspension system. Niner’s refinements to the kinematics are intended to give this bike superior pedaling characteristics despite having 170mm of frame travel. Helping refine how a particular rider wants the bike to respond are the Flip Chip changes. Let’s explore the options.

Niner sends out the WFO in the low setting. This gives riders a 64-degree head angle and 77-degree seat angle. Reach is rather short on our large test bike at 480mm in low. Putting the bike in the high position steepens the head/seat tube angles, extends reach by 7mm, raises the bottom-bracket drop 9mm, shortens the wheelbase by 2mm and bumps up the standover by 7mm.

With the Fox X2 shock visible, we went with 30-percent sag and typically had the compression settings wide open unless we were climbing a fire road. Rebound is a bit subjective, but our main tester was right at five clicks for slow and high speed. At the front, we ran the Fox 38 at 25-percent sag with one click of high-speed compression and four clicks of low-speed compression. Rebound changed a few times, depending on the type of terrain we were facing. Nonetheless, our main test rider typically runs a 38 somewhere in the middle of the clicks available. With all systems checked, we hit the dirt!

Climbing: The new WFO gives off an active feel that maintains traction well and retains efficiency, even in the shock’s open position. We mostly left the shock compression setting wide open for more technical or varied surfaces during ascents. To all of our test riders’ surprise, the WFO didn’t bob excessively and remained very supportive. We never felt like our energy was being drained in the time it took us to get back to the top of a climb. We are seeing more suspension platforms that make obsolete the days of reaching down to switch between suspension modes; however, we did have some long fire-road sections where it just felt right to damp the shock for out-of-the-saddle climbing. Overall, we were impressed with how comfortable the WFO felt during climbs for being a big-travel enduro machine that is hungry for the downhill.

The low setting on the Flip Chip satisfied the demands of our main tester’s riding style. The bike felt superb in corners, given its long wheelbase and rear triangle, but it truly shined elsewhere. In our opinion, the biggest strength of the WFO was in steep, high-speed sections of trail. The bike is remarkably calm, doesn’t flex excessively because of the frame stiffness and stays planted over rough terrain. There is no mistaking that the WFO is a big bike when you first hit a descent. Sure, it smashes the downhill, but we wouldn’t limit its potential, as it held its own against shorter-travel bikes.

Although our test rig was a mix of top-of-the-line components, we couldn’t poke holes in any of the component choices offered. Saving weight would offer the biggest advantage if a rider were looking to do any upgrades at all. Realistically, however, the performance gains would be minor considering the original cost of the bike. What it comes down to with this ride is customization. This is the type of bike that allows a rider to put on whatever makes it his own and go ride.

With the ride characteristic literally in the name, this machine is truly at home being pushed at full-open speeds. We feel the WFO is adequate in a variety of settings, but as we mentioned, it is best for heavy terrain and flat-out speed. Despite the downhill power, we were very impressed with how the WFO managed on our steep Southern California fire-road climbs. A rider looking to decimate a gnarly trail or take on an Enduro World Series course would be right at home aboard the WFO. 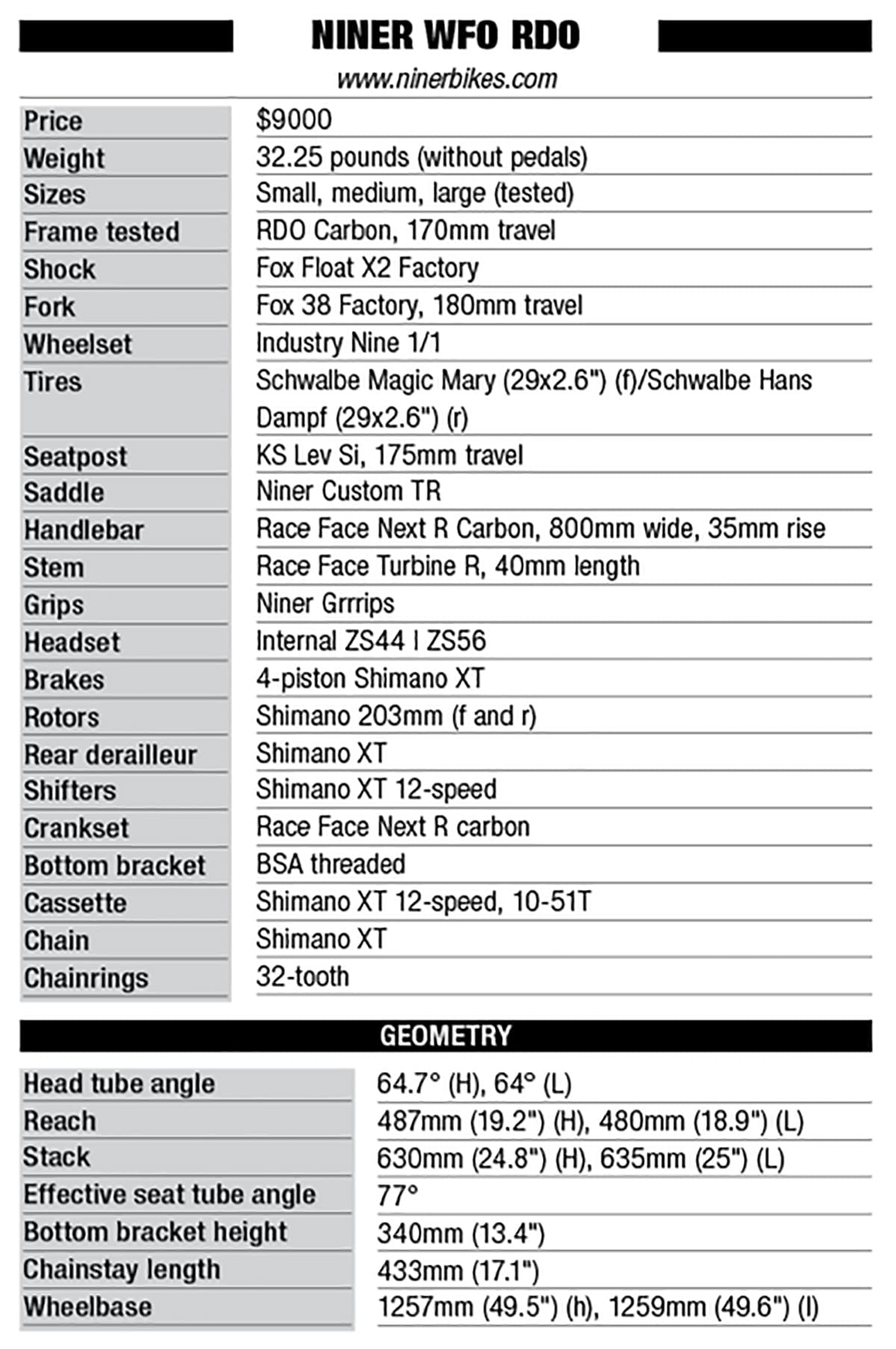 MEET THE RIDERS AND THEIR RIDES: PAULINE FERRAND-PREVOT

MESSING ABOUT IN MORZINE