(Mike Cushionbury was an editor at Mountain Bike Action  back in  2000 when he attended the NORBA National event held in Big Bear, California, and filed this report.)

After some major work 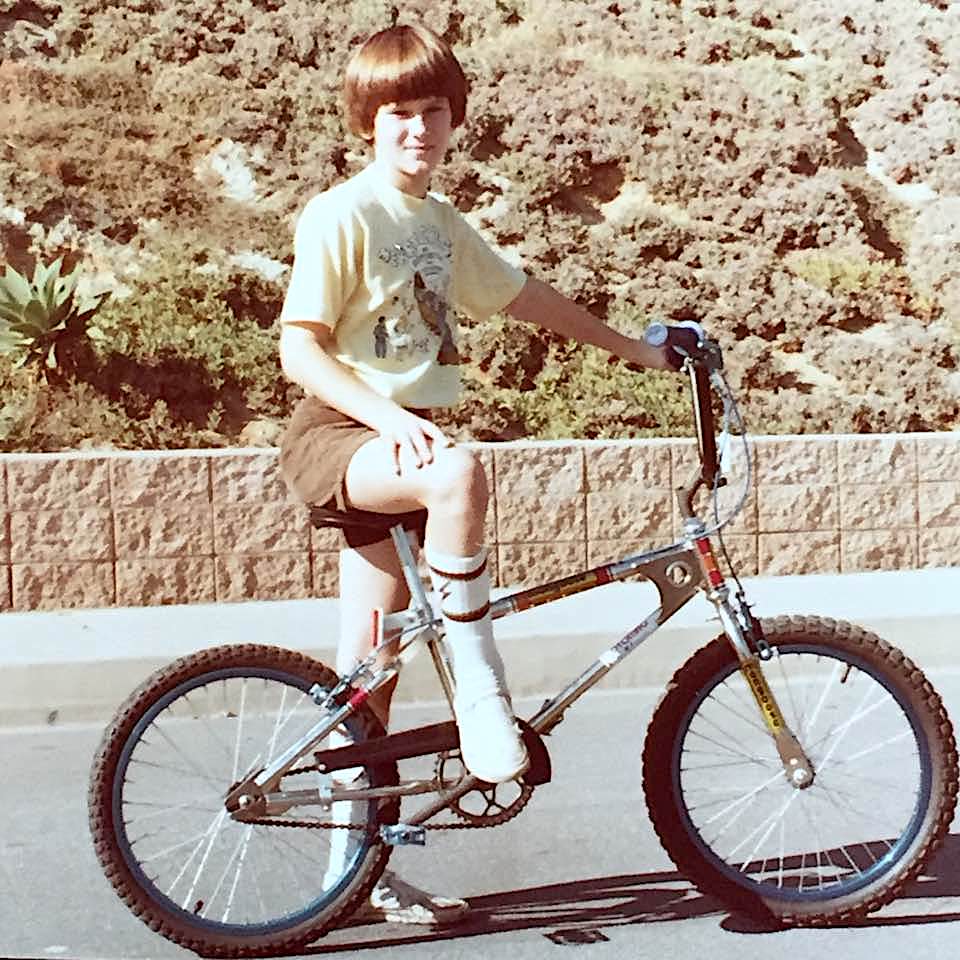 on my double-wide (the suspension was sagging and I had to paint the entire thing purple), I made my way (slowly) up the hill to Big Bear. By now, people recognize my home on wheels, so it took me almost six hours to get up the hill from Los Angeles. People were shouting, stopping me for advice and pictures. This whole internet thing is wild. I have a space-age, wireless internet connection hooked up to the kitchen outlet in the double-wide that allows me 24-hour internet access. I finally got up the hill, parked in the Snow Summit parking lot and got ready for the race.

“It used to be that the cross-country guys were the crybabies of the sport; now you don’t hear a thing from them. It’s the downhillers who are always whining about something.”—Jeff Holt, the industry’s keenest observer.

“Insane” Wayne Crossdale is one heck of a nice guy, but let’s face it, the one-time downhill World Champion is past his prime (he can’t quite qualify for the pro downhill anymore). He has moved on in life, has other obligations, but still comes out to the races because he loves it. At the Big Bear Nationals, Wayne, knowing he ain’t pro speed anymore, signed up to race the Veteran Expert 35-39 downhill class. When Wayne got to the top of the hill for his run, the riders in his class threw a tissy about Wayne racing, saying “it’s unfair” and this and that. Rather than see it as a challenge to have a guy like Wayne racing with them, these riders complained so bitterly that Wayne finally threw his arms up, pulled out of the race and took the chair-lift back down. How’s that for crying.
For reference, the Veteran Expert 35-39 cross-country class had Paul Thomasberg (number one pro rider in 1990), Johnny O’Mara (former pro) and Mark Noble (former Olympian) in its field. I have yet to hear any of the riders in this class complaining.

The race that almost wasn’t went off in nice form this past weekend with good amateur racing and exciting pro racing, even if one of America’s biggest bike companies, Specialized, was nowhere to be found, and Volvo-Cannondale had only two riders, working out of the So-Be-HeadShox truck.
It seems that Team Big Bear got the go-ahead to use the trails on the mountain on the Tuesday before race weekend. The Team Big Bear crew could have taken the easy way out and thrown in the towel, but they didn’t and struggled to prevent an all-fire road weekend (what the land managers in Big Bear really want to see). Kudos to Team Big Bear!

After seeing Volkswagen-Trek rider Kirk Molday get DQ’ed from a local race in April, the invisible 1997 NORBA series champion made a triumphant return to the podium by winning the long course cross-country at Snow Summit on Friday. What makes it even more impressive is that the race turned out to be a 34-mile death march under clear, 80-degree skies, that saw the pro men climb Snow Summit four times. Originally, the men were to do four laps but since this was an Olympic qualifier, the riders had to be on course at least 2 hours and 15 minutes (the World Cup minimum limit). Molday’s winning time of 2:37:33 gave him a 19.32 second margin over second-place Greg Randolph of GT.
RLX-Polo-Sport’s Dave Wiens holeshot the start and was first onto the singletrack followed by Gary Fisher-SAAB wonderkid Ryder Hesjedal and the rest of the 85 strong pro field. A lead group of Randolph, Swenson, Wiens, Adrian Bonilla (Cafe Costa Rica), Kashi Leuchs (Volvo-Cannondale), Peter Swenson (So-Be) and brother Carl (RLX-Polo Sport) quickly established itself the first time up the mountain, but much jostling was to come.
By the end of the lap, Jimi Killen (Schwinn-Toyota) and Ziranda Madrigal (Turbo) had joined the leaders and made their presence known. By the end of the second lap, Ziranda took the lead from Killen as the riders crossed the start/finish. By now, Molday had come from the back row all the way up to the chase group that was 15 seconds back containing Steve Larsen (L.L. Bean-Mongoose) and Roland Green (GT).
As Killen and Madrigal began to fade quickly on the third lap, Molday made his move to the front, followed closely by Randolph, Larsen, Hesjedal and Marc Gullickson (Mongoose Pro). The rest of the early leaders joined Killen and Madrigal on their backward trip. By the end, a cramping Randolph couldn’t quite catch Molday who put in a flawless ride.

The pro women got off a little easier than the men by only having to do 2 laps on the 8.5 mile course, but if you weren’t Fisher-SAAB rider Mary Grigson, then the race was far from easy. After a crash entering the singletrack, the leaders up the climb were Jimena Florit (RLX-Polo Sport), Grigson, Chrissy Redden (Fisher-SAAB) and Ann Trombly (Koulius-Zaard). Notable absentee was GT’s Alison Dunlap, who elected to sit this race out, after a hectic early season World Cup campaign that saw her place second three times.
Trombly led going into the singletrack downhill but was quickly passed by the skilled descender Grigson, who then opened a 26 second lead over Trombly and Florit. Volkswagen-Trek rider Ruthie Matthes was 10th across the top of the mountain but chased to fourth by the end of the first lap (Ruthie says she will retire at the end of this season).
From here on out, Grigson simply worked on extending her lead. Trombly held onto second until the final descent of the day when a charging Matthes snuck by.
Redden had fourth in the bag until she flatted a few miles from the finish. She caught every rider who passed her except Florit.

Again, it was Ryder Hesjedal showing his form by holeshotting the short course but he was quickly passed by an on-fire Greg Randolph, who was quick to distance himself from the field. Pavel Tchekassov (Gary Fisher-SAAB), Kashi Leuchs and Geoff Kabush (Kona) established themselves as the main chasers with Hesjedal dangling between them and the main field. Randolph opened a lead that was never challenged, capping off a superb weekend for the man with the large mutton chops, who may finally be coming into his own.

WOMEN
By the second lap, it was Mary Grigson at the front with her teammate Chrissy Redden. The two Fisher riders battled until Redden opened a five-second lead over Grigson and Ann Trombly. Trombly then pulled Grigson back up as Redden began to fade from the pace. Grigson and Trombly opened a sizable gap that left Redden and Jimena Florit dangling in the wind until the finish.

On a course that might best be called a mix between the Kamikaze downhill and a BMX national, the 2.2-mile Big Bear downhill had one purpose—to wow spectators with massive air time. The course had huge doubles, monster triples, a step-down and a nasty drop-in that has bitten John Tomac not once but twice!
Haro-Lee Dungaree’s Scott Sharples held the time to beat but the real excitement came when Chris Kovarik bombed down the hill with a top-placing run, only to come up a tad short on the final stepdown, and launched himself through the sky, landing square on his back on the concrete finishing pad—just feet from the finish.
After a short delay to clean Kovarik off the course (he turned out to be fine), 14 riders were left. First Michael Ronning (Intense) cut into Sharples’ time, then Rocky Mountain’s John Kirkcaldie. Finally, Schwinn-Toyota’s Dave Cullinan shattered everyone’s time to take the lead. But, the man of the day was top-seeded Kamikaze King, Myles Rockwell of Giant, who took advantage of his high-speed abilities and stormed home with the fastest time of the day.

How many Schwinns does it take to win a race? Two. Elke Brutsaert and Leigh Donovan owned the Big Bear course (they have both won here before). The only rider to come close to the dynamic duo was 17-year old Kathy Pruitt (Sun Race-Santa Cruz). Leigh’s run was hampered by a flat front tire near the top of the run but that didn’t stop her from pretty much destroying all but her teammate.