He’s been making history for a while, too.

Pidcock is now racing in his first Tour de France and is already showing signs that he’ll be a serious contender in the future and possibly even in the remaining stages this year.

Pidcock, who will turn 23 on July 30th this year, won two Elite Men’s World Cup cross-country (XCO) races earlier this year before pulling out of that series to get ready for the Tour de France. Pidcock had won his first Elite Men’s World Cup XCO race last year while preparing for the Tokyo Olympics (which had been postponed a year from 2020 due to the Covid pandemic).

This past Thursday, Pidcock won the Alpe d’Huez stage of the Tour de France. He was the youngest rider ever to do that.

Pidcock has been one of the top ten riders in the overall rankings (the general classification) of this year’s Tour de France for much of the event, even making the top five on occasion. As of this Monday (a rest day for the riders), however, he was down in 22nd place in the General Classification rankings following Sunday’s Stage 15. At the end of Tuesday’s racing, Stage 16, he had moved up to tenth place in the overall rankings.

Pidcock will likely get even faster over the next ten years. Historically, endurance road riders tend to enjoy increasing endurance as they get into their late 20s and early 30s. Most road cyclists can be expected to hit their peak years after the age of 25 and before 35. The oldest rider to ever win the Tour de France was 36. The youngest was 20. The average age of the Tour de France winners is 28, historically, although riders in their early 30s have reportedly been winning more in the last few years.

In a Google search to find the peak age of cyclists, we came upon this quote from cyclist.co.uk: “The standard thinking is that in most sports athletes peak physiologically at around 27,” according to British Cycling coach Will Newton. ‘It’s not quite as simple as that because there has to be a window, and for most pros that can be a broad range between the mid-twenties and mid-thirties. But it has a basis in fact.”
Here’s a short video clip of Pidcock winning Stage 12 of the Tour de France, the Alpe d’Huez, last week:

Below you can see a photo of Pidcock racing his mountain bike earlier this year. 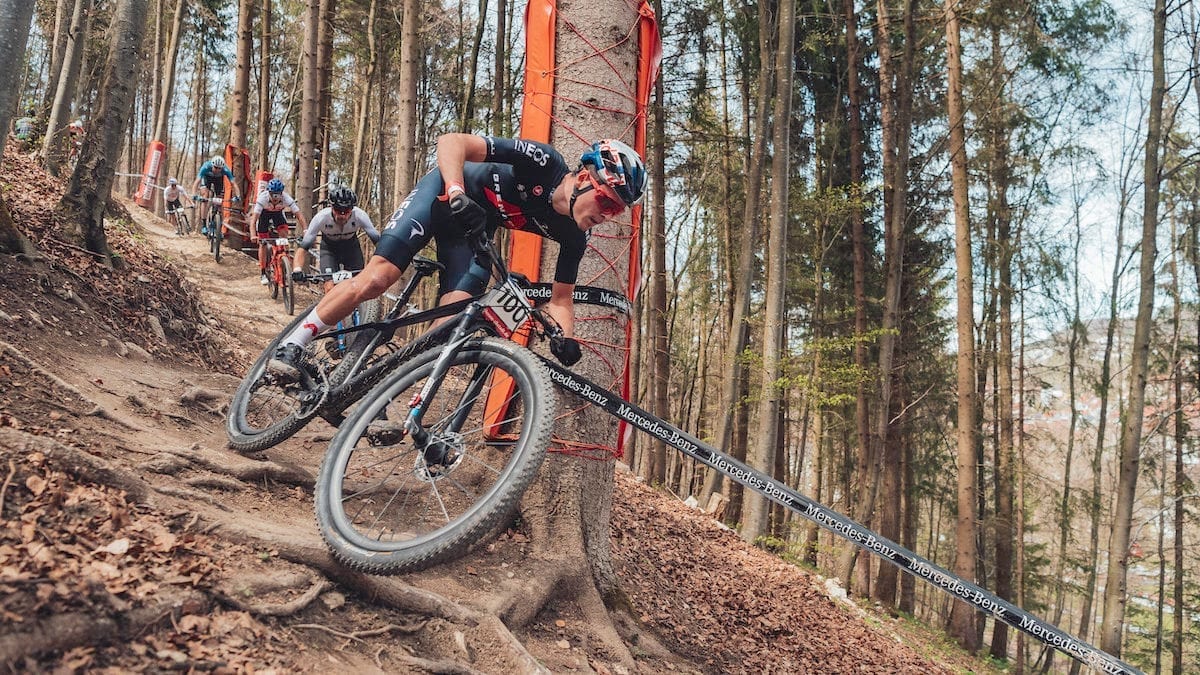 Mathieu van der Poel, who took second behind Nino Schurter in the final standings of the Elite Men’s XCO class in the UCI’s World Cup series in 2018 and 2019 had been in the top ten of the rankings in this year’s Tour de France in the first few days, even ahead of Pidcock, but we couldn’t find him on the list in the latest GC rankings. It turned out that Van der Poel withdrew from the Tour this year after Stage 11, when he attempted a breakaway with a group of other riders, and they dropped him, too.

Last year, Van der Poel got to wear the yellow jersey as the overall leader of the 2021 Tour de France for six days in a row before he withdrew from the race to prepare for the Olympic mountain bike race, where a crash on a rocky descent ruined his chances for an Olympic medal. Until that crash, Van der Poel was considered one of the favorites for Olympic gold in Tokyo.

EVERYTHING YOU NEED TO KNOW ABOUT YOUR ELECTRIC MOUNTAIN BIKE BATTERY