TOKYO –   The Izu peninsula was the scene for the Men’s Cross-Country Olympic event. The technical, 4.1-kilometer course just west of the Izu Velodrome and had features like Amagi Pass, the Chopsticks, and the Sakura Drop. The race had one start loop and seven laps of the course, for a total of 28.8 kilometers. The venue in the Shizouka Prefecture of Japan hosted a crowd of 6,600 locals.

On the starting line for Team USA, Christopher Blevins (Durango, Colo.; Trinity Racing) toed the line with a third-row call-up. The start line hosted 38 riders representing 29 countries. Having rained earlier in the day, the race was humid at the start, but overcast skies prevailed through much of the race cooling the venue. Riders charged at the gun, aiming to get the holeshot near the Amagi Pass before entering the singletrack.

Milan Vader (NED) was the early lead through the start loop, leading a group of 10 that included Tom Piddock (GBR), Mathieu van der Poel (NED), Anton Cooper (NZL), and Mathias Flueckiger (SUI). The start loop was chaotic, but Blevins felt that it made him slow down and reset to perform a consistent race. “I lined up on the left side, which was the strategy. The way the field moved up to the start line, there’s always that scramble that’s like two seconds to get in position, and I just didn’t find a great wheel off the gun,” said Blevins. “Then I was off-the-bike more than I thought we would be. The group split twice in the start loop, and it got chaotic with how loose the track is in the dust. So not the best start loop, but I went through the first lap only 30 seconds down and maybe a little more recovered than if I had a good start loop. I think that helped me have a patient, strong race.”

Having the chaotic start meant Blevins needed to make some moves and get on the gas. He would need to battle the field traffic through the first several laps to move from 32nd place into the top-15. “There are all these kinds of micro-moments where you can take advantage, and I just tried to keep my eyes up and be patient and not try to waste energy. But when I saw that micro-moment to get ahead of two people, I took advantage of it,” said Blevins. “The field kind of bunched up a little bit on the finish straight, and I used that to take like five places at once a couple of laps. I think I moved up quicker than I expected after that start loop.”

Race favorite van der Poel crashed on the first lap at the Sakura Drop, a rock drop on the backside of the course, and eventually abandoned the race, but it gave some extra motivation to some of the riders. Blevins said, “When I was in the air on that drop, I saw this flash of orange on the ground to the right. And I was like, ‘Oh, no, that’s van der Poel.’ I thought he was going to pull out after that because that’s a bad place to crash. Then when this tall, orange guy zoomed past me, I was like, ‘alright, I’ll try to follow that wheel,’ and he got a gap. Then I think he must have blown a little bit after chasing so hard. I went by him again, and it gave me a little bit of motivation to have him in my sights.”

Moving into the last half of the race, Blevins maintained his position in the top-15, racing among a group of 4 consisting of Jofre Cullell Estape (ESP), Filippo Colombo (SUI), and Maximillian Foidl (AUT). At the front of the race, Piddock charged to the front on the third lap and maintained his lead from that point on. Flueckiger led early in the day and stayed with Piddock until he spun out on the final climb, allowing Piddock to open a twenty-second gap. David Valero Serrano of Spain went from eighth place to third in the last three laps of the race.

Blevins finished in a time of 1:28:19, 2:59 behind Piddock. His finish puts him as the second highest placing American in an Olympic Games behind Todd Wells’ 10th place finish in London 2012. “I can’t say enough about what this experience has meant to me and how much love and support I’ve heard from back home,” said Blevins. “That’s been so inspiring and motivating for this moment, but also for the future of my involvement in the sport. I hope that, actually I know, that in three years, the U.S. will be in a strong position with myself, hopefully, and a bunch of young riders coming up. So, let’s get two spots or more on the start line and be fighting for a medal.”

There’s more to come from Blevins, but for now, he’s just soaking it all in and enjoying the process. “For me, I just graduated from college and then just had this moment. So, I’m going to take it in, step-by-step, and really appreciate the work that’s gone into this. I don’t have that long there,” said Blevins. “I’ve got three, four weeks back stateside, and then World Championships, a couple more World Cups, and then I’m going to make a big push for cross this season with the World Cups and World Champs in the states. I’ll keep the gas on through October and then take it in, and it’s only three years away for Paris [Olympic Games].”

Of course, it takes a village to get to this point, and Blevins couldn’t say enough about the support system that keeps him going. “I could say a lot. I’ve got such a good support crew, and that’s what got me here, and that’s what’s going to carry me onward. My parents, all my friends and family, the town of Durango, and really everyone who loves bike racing and bike riding in the U.S.,” said Blevins. “It’s a special community, and I’m just thankful to be a part of it and hopefully keep pushing the U.S. forward.” 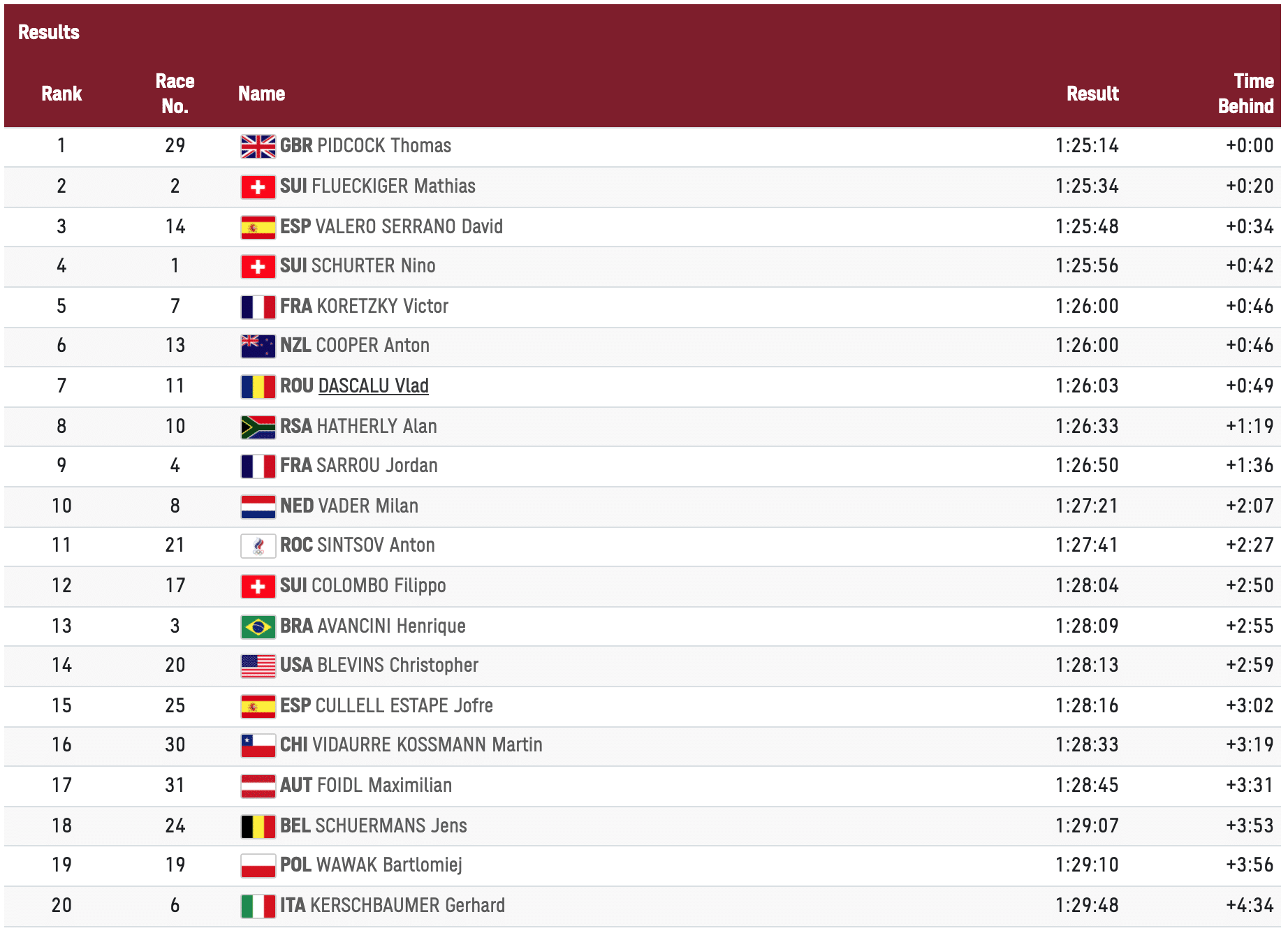 We’re back at the Izu Mountain Bike Course with Haley Batten (Park City, Utah; Trinity Racing), Kate Courtney (Kentfield, Calif.; SCOTT-SRAM Factory Racing), and Erin Huck (Estes Park, Colo.; SCOTT-Stages) for the Women’s Cross-Country event, where they face off against a field of 38 riders to take on 24.4-kilometers of technical course.