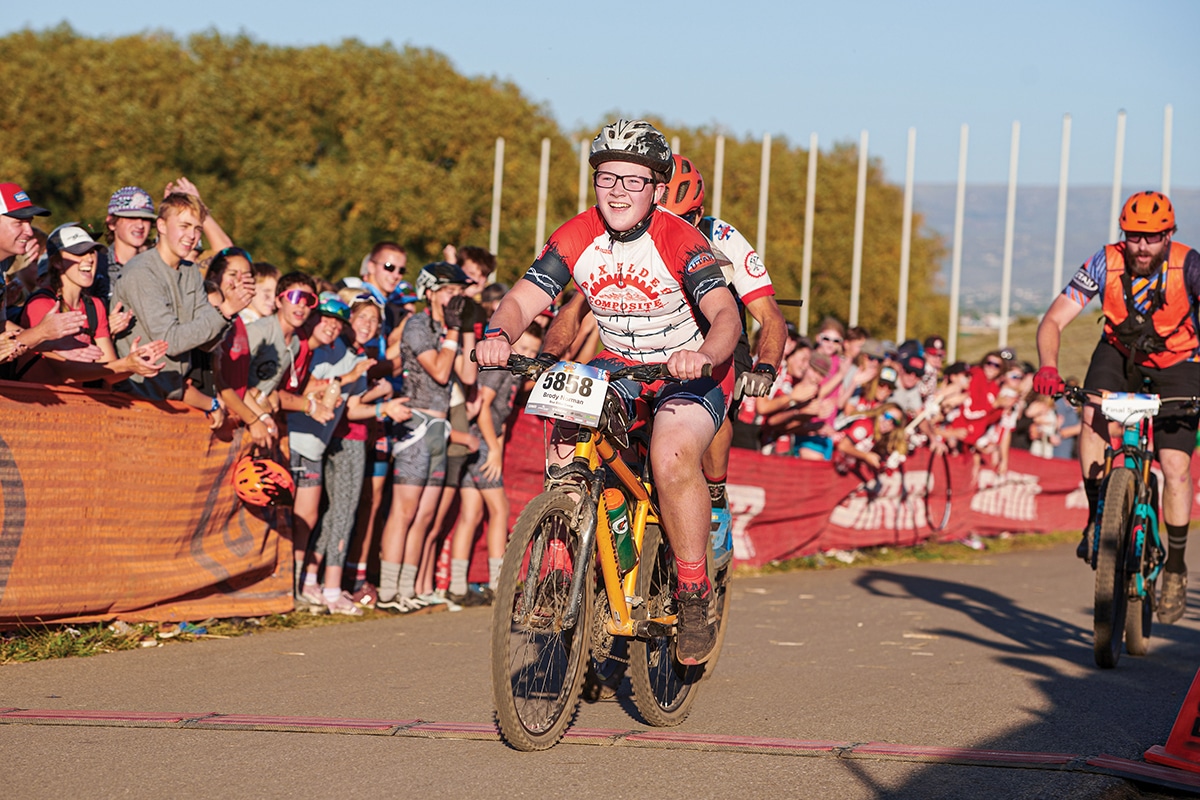 I’m a coach and like to ride, which is why I coach. I hope to pass on the excitement I get from riding. At a recent race, I signed up to be a sweep. For me, this is one of the most fun positions. I am there to help and encourage the riders on the bike. The athletes at the back are working just as hard as the winner, and they might be working harder in some cases. They deserve to be cheered on as much as first place. NICA does a great job of instilling in its riders the belief that we are equal and we should support one another regardless of placing or team.

At Soldier Hollow, I was riding with one of the Box Elder riders. He was on an older bike with some gear issues, but he was out there riding. I started to talk to him and encourage him. I told him about areas coming up, what gear he should be in, and what line to take. He told me that he had never done the second lap. He had always gotten pulled. I told him that today would be different. I’d try to get him to do a second lap, but whatever happened, I was riding with him at any speed he wanted to go. We stopped a couple of times, but we kept going. Then we crossed the finish line, and he stopped. When I asked, “Why did you stop?” he said, “We haven’t made the time cut.” The smile on his face when I said that we had and now it was time to do another lap was amazing. This was the first time he’d been able to make the second lap. As we climbed the next hill, he told me that he had a deal with his mom that if he made the second lap, she would buy him some books and clothes, so doing this lap made him a winner.

We carried on riding, and I think we went faster that lap than the one before. As we came into the finishing chute, my Team Park City was there, all lined up cheering him on to finish. I was riding behind him shouting encouragement, and his head coach was waiting on the other side of the line to give him a huge high-five. At our next race, which I wasn’t able to make, his team came over with a large plate of cookies as a thank you, and I got a special gift. The head coach said that the rider wanted me to have them as I had made a huge impact on him in ways that I will never know. He went on to have his best-ever race that day, and I feel confident that he learned some great life lessons. So, if you can coach or be a sweep, do it. It’s the best thing ever and means so much to the riders. I feel like I am making a difference.

A RACER IS BORN

My first year on the Box Elder Composite mountain bike team was a lot of fun! At first I didn’t want to join the team, but my mom made me, and I’m glad she did. I always enjoyed the practice runs on the mountain and was bummed when I had to miss one every once in a while. I love the trail that my team uses for practice. At first, the races were the only things I disliked about being part of the team.

My first race was at Beaver Mountain, what I like to call “The Monster.” I thought that I was only going to ride one lap and be done, but we got there and learned that I would have to do two. My mom had thought I only had to do one lap, so she felt bad and made a deal with me. If I could get a qualifying time and finish both laps, then she would buy me two books—one for each lap, a shirt that references another book I had previously read, and a juicy cheeseburger. I agreed to the deal. That trail was one of the hardest I have ever ridden, and I had a hard time. I finally made it to the end of the first lap but came in about 30 seconds after the cutoff time. I was sad that I didn’t make it, but I was also very glad that I didn’t have to ride another lap on that trail again.

The next race at Snowbasin, my mom said she would keep the deal going until I got a qualifying time on any race. On the trail, I crashed and bent my bike in places that made the brakes push against the front wheel, which made it really hard to ride. I had to walk my bike down in the end and didn’t finish that race. The next race was Soldier Hollow, and I had to ride my mom’s bike since mine still wasn’t fixed. At the Soldier Hollow race, I was on the trail and actually passed a couple of people. I was feeling great, until the sweep was on me. I was worried I wouldn’t make it, and the sweep was right behind me. He and I talked a little bit as I rode. I can’t remember what we talked about, but I remember how he kept pushing me to keep going. I finally passed before the cutoff time for the first lap! I knew today was going to be the day I would get a race time!

When I got home that night, I had my mom order two books and a shirt, as per our deal. A few days after that race, one of the assistant coaches on the team approached me and said that he wanted to sponsor me with his business. He said that he had been thinking about sponsoring a different rider on our team every year, and he was super impressed with my determination and dedication to mountain biking, even though I wasn’t that great at it. We met Chad Hansen at our local bike shop, and he generously gifted me with a new cherry-red Trek Marlin 8. He also paid for tubeless tires for the bike, as well as a nice helmet.

I started taking the new bike to practice, and I could feel a major difference from my old bike. The Vernal race was cold and windy. It was almost canceled because of the wind, but we only ended up riding one lap after the half-hour delay because of the winds. That race was fun and pretty easy compared to Beaver! After I came in through the finish line, the wife of my coach came and gave me a foil blanket of my own and told me that I had come in before quite a few riders, which was cool for me since I came in last at Soldier Hollow. My first year of mountain biking was a blast, and I can’t wait for the next season!