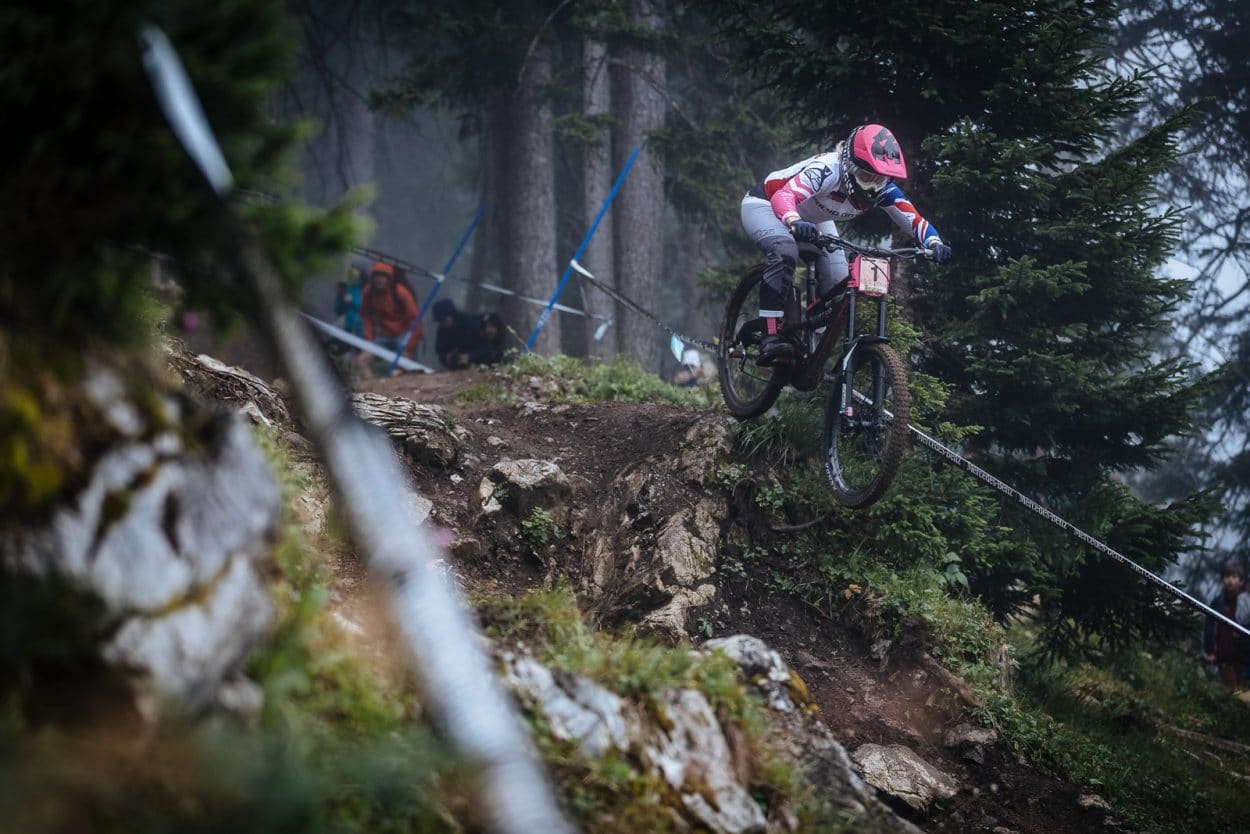 The Mercedes-Benz UCI Mountain Bike World Cup in Lenzerheide continued on Saturday with thrilling Downhill action. Amaury Pierron and Marine Cabirou took the win in their races, turning the Swiss mountain bike mecca into the beating heart of a French party. But the Swiss would not go quietly into the night – Emilie Siegenthaler and Camille Balanche also finished on the podium in 3rd and 5th and made sure that the 10,000 gathered spectators also had plenty of reasons to celebrate. 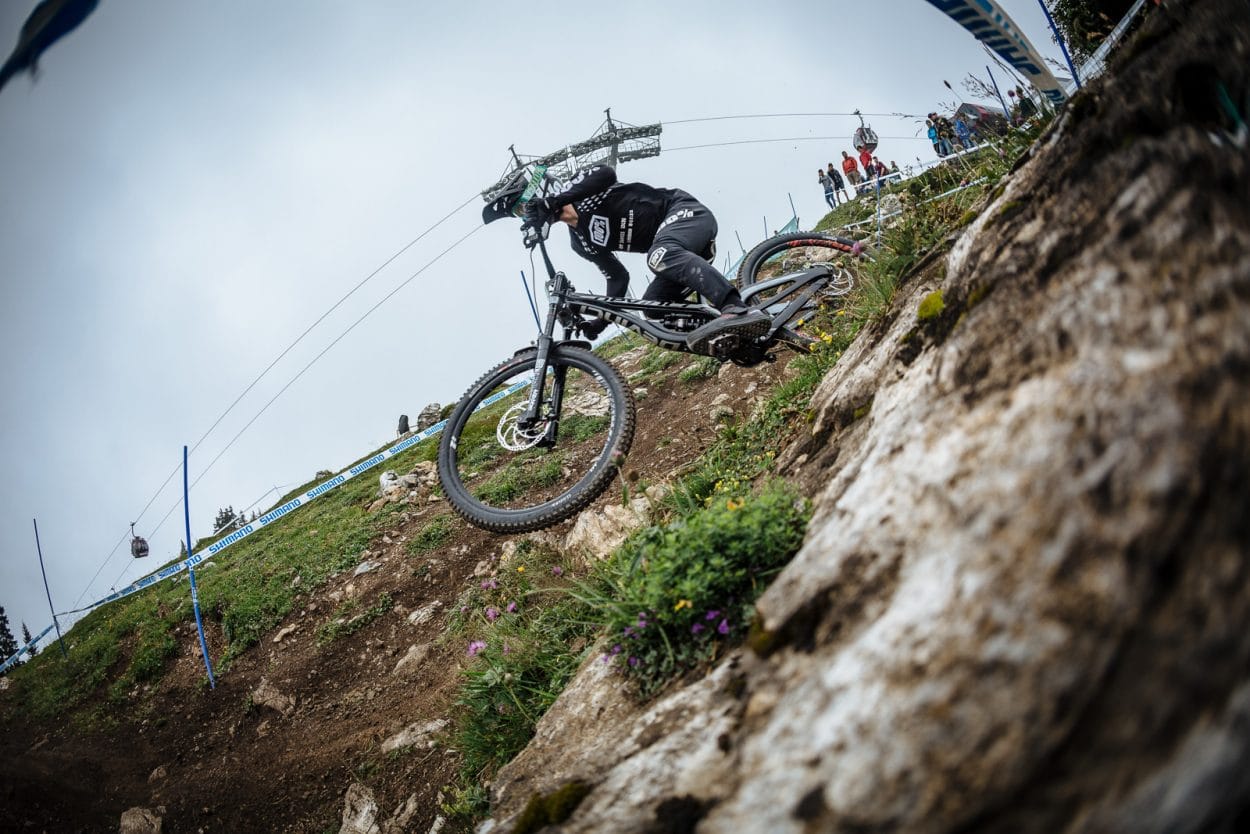 Staying true to the #FullgasMTB motto, Saturday’s Downhill mountain bike action easily exceeded expectations, even if the weather tried to throw a wrench in the plans with rain creeping over the idyllic Swiss town of Lenzerheide for most of the morning, resulting in some last-minute changes to race strategy for a number of the riders. With torrential rain on Wednesday, the first day of practice was a wet one, but on Thursday and Friday, the blazing sunshine brought about a dry track, until Saturday morning. Come race day, Lenzerheide’s ugly side reared its head – the morning rain changed track conditions quite quickly and with fog rolling through the mountains and settling on the Rothorn, visibility changed minute to minute. Nevertheless, the fifteen fastest women qualifiers took on an almost ever-changing track when the first start buzzer sounded at 12:30. The first benchmark was set by German racer Raphaela Richter, coming down the mountain in 3:44.136, a time that would put her in 8th place at the end of the day. Swiss speedster Camille Balanche turned on the afterburners, besting Richter’s time by 1.226 seconds, unofficially opening the Top 10, but Balanche’s stay in the hot seat was short lived, as Kate Weatherly, who qualified in eighth, managed to sneak by Balanche with a time that was 0.171 seconds faster. Weatherly and Balanche would hold on to their top spots until almost the very end of the race and only the top qualifiers were left at the top of the mountain. 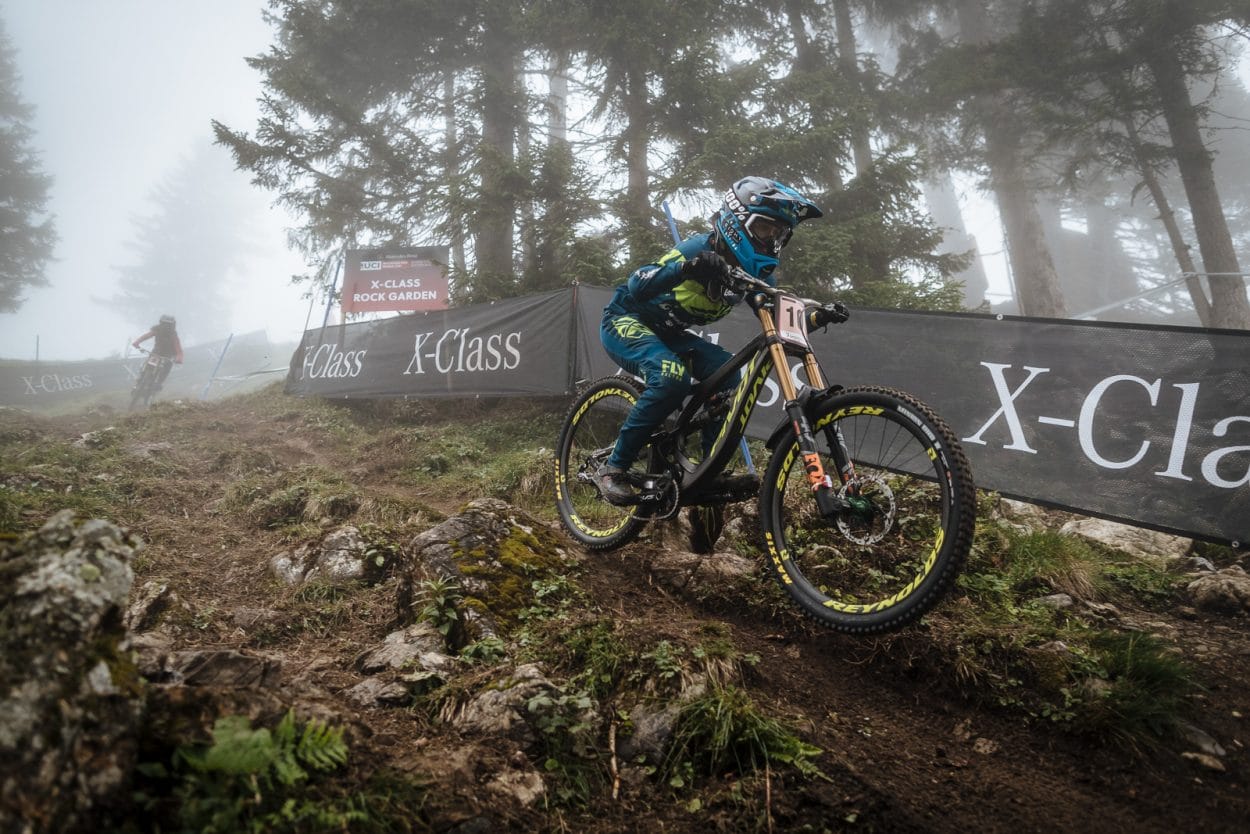 The thrilling conclusion to the women’s race was opened by Emilie Siegenthaler (SUI), who went wild fueled on by the thousands of gathered spectators. A race run filled with risky moves, including a quick dab to regain balance, resulted in a new best time of 3:41.389. Just how incredibly close the racing was on Saturday morning was shown by Italian inferno Veronika Widmann who crossed the finish line in 7th place while only being three seconds back to Siegenthaler (Widmann would finish 9th at the end of the day). Marine Cabirou would take to the track with only Nina Hoffman (GER) and Tracey Hannah (AUS) left at the top. Fired up by her win in Val di Sole, Cabirou went flat out on the gas pedal, coming into the finish area with a time of 3:34.304, over seven seconds faster than Siegenthaler. Second-place qualifier Hoffman launched down the track with a risky, aggressive strategy. Following a minor mistake coming into the bottom half of the track, the silver medal was still in sight, but disaster struck shortly after – with a rear flat, Hoffman slid out on the last part of the track, costing her an insurmountable 25 seconds to the first place, with the German having to settle for 13th place. 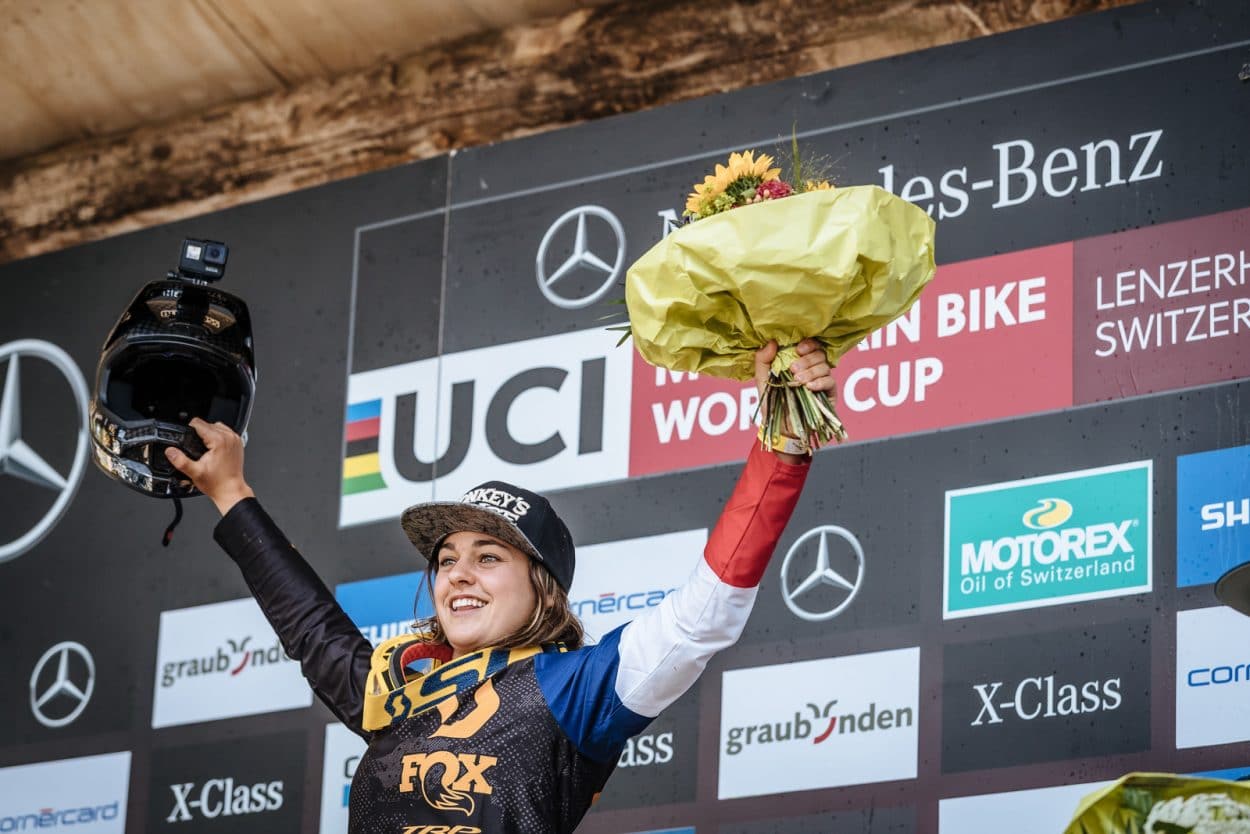 Just like last week, the 1-2 battle would be decided between Cabirou and Hannah, who was once again the fastest qualifier. Cabirou watched on nervously from the hot seat as the Australian surgically dissected the track. Hannah would turn a 0.3 second deficit at the first split into a 1.1 second advantage by the third split. However, Hannah lacked the full-risk approach that Cabirou took on the bottom half of the track and would see her split times turn from green to red, with the Australian being only 0.264 seconds back at the end of her race run, which would give her second place. The 22-year-old would celebrate her second World Cup victory within one week thanks to an incredibly close race. “Back-to-back World Cup wins is incredible and unbelievable. I have to say I’m not 100% satisfied with my race run. I made a lot of mistakes because it was pretty slippery, but I stayed on the bike and tried to get to the finish as fast as possible. Now, all I am is happy,” said Cabirou. 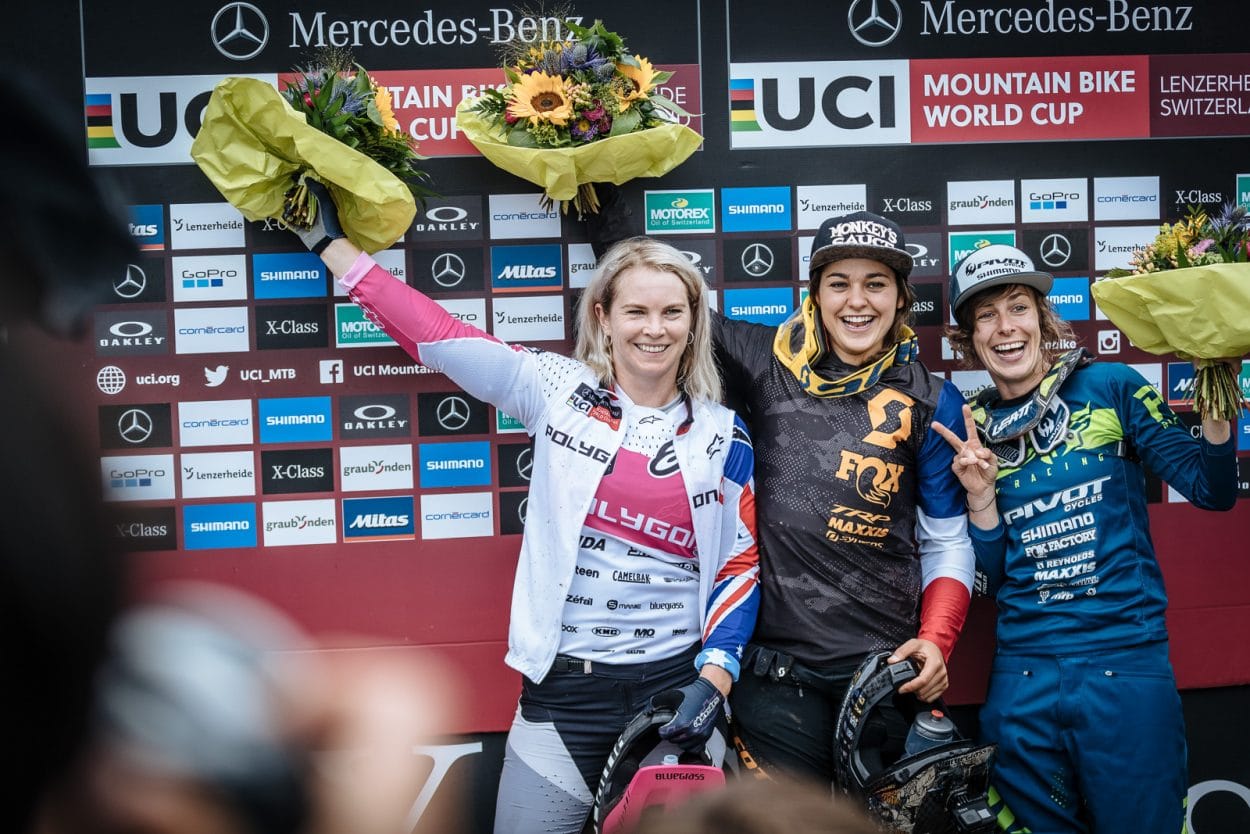 Hannah, who was only a blink of an eye slower than Cabirou, is also satisfied with her result. “It was a crazy race. It rained a lot at the top and it was difficult to adjust to the track. I didn’t want to go for a safe run – I wanted to win, but the focus was on the conditions and on getting to the finish area without crashing. I’ve never finished higher than second here, so it’s all good and I’ve picked up some more valuable points for the Overall World Cup.”

To the delight of the gathered Swiss spectators, Siegenthaler finished in 3rd place – her best World Cup finish yet. “I’ve never finished higher than third and even that was a while ago. Actually, that happened here in Lenzerheide, in 2017. This third place in front of my home crowd means a lot to me.” Weatherly finished in fourth place and Balanche closed out the podium and an outstanding Swiss performance by finishing fifth. 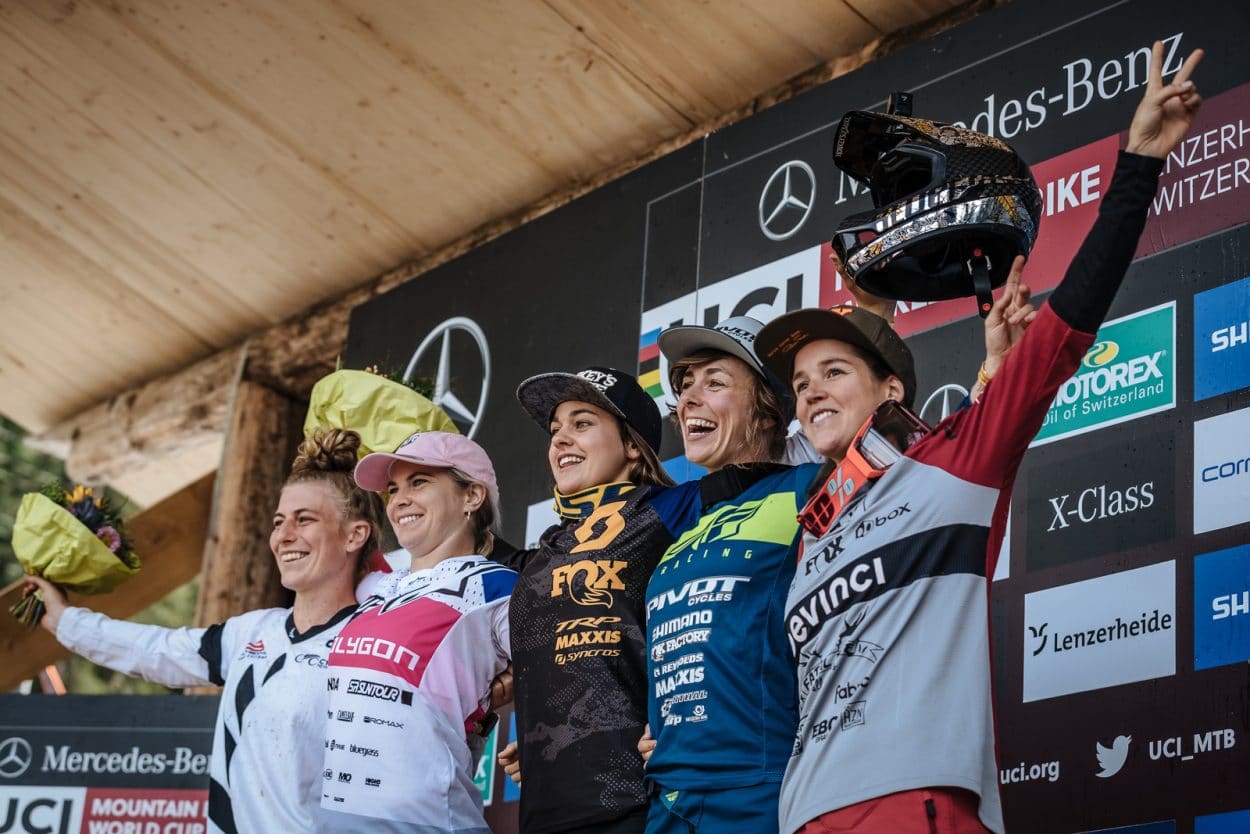 The French strike back – Pierron closes gap to Bruni

Last week was the first time this season that a World Cup winner wasn’t French. British bomber Laurie Greenland caused quite a stir in Val di Sole by shaking up the top of the podium, sneaking the win in Italy. Following up on his strong performance, Greenland once again showcased his form in front of 10,000 gathered fans – only needing 2:53.688 minutes to conquer the 2.2 kilometer / 1.36 mile long STRAIGHTline, taking the hot seat with a two second lead. Only five riders would prove to be able to best the British time. 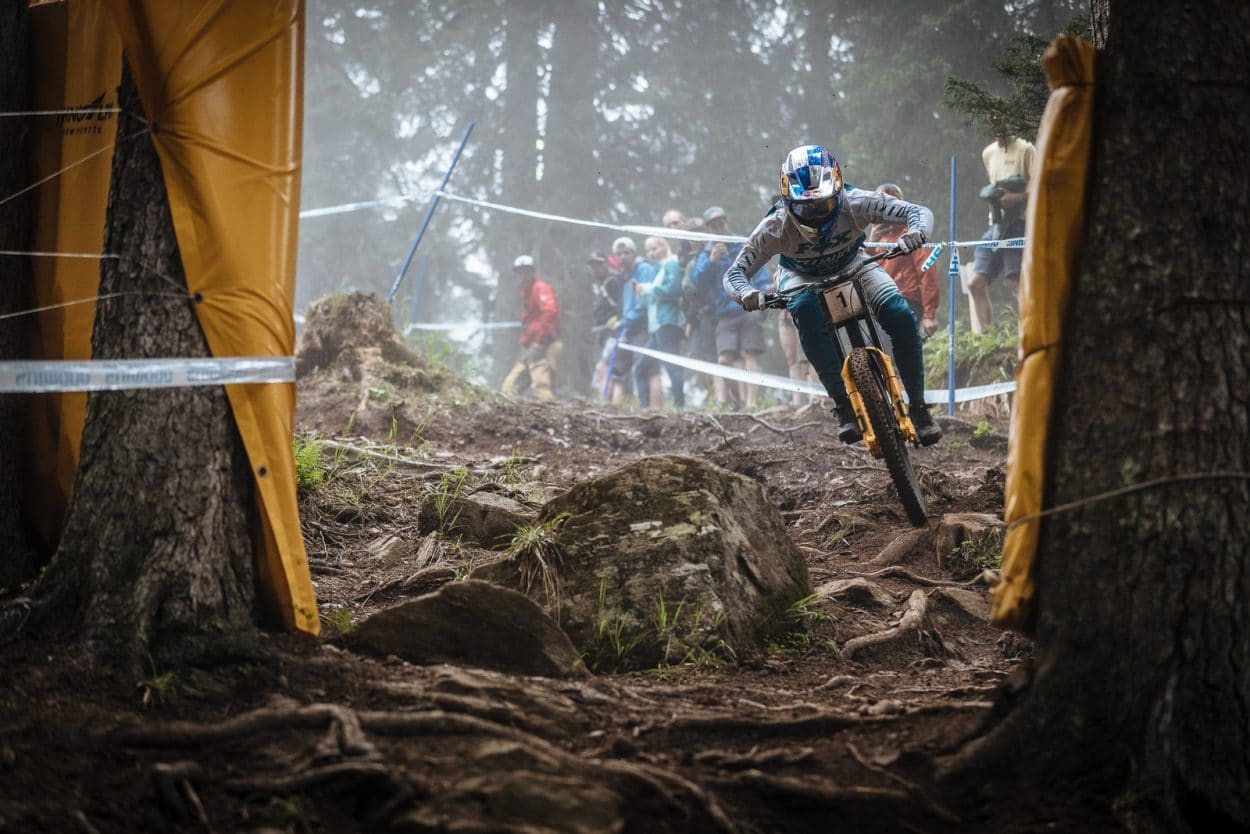 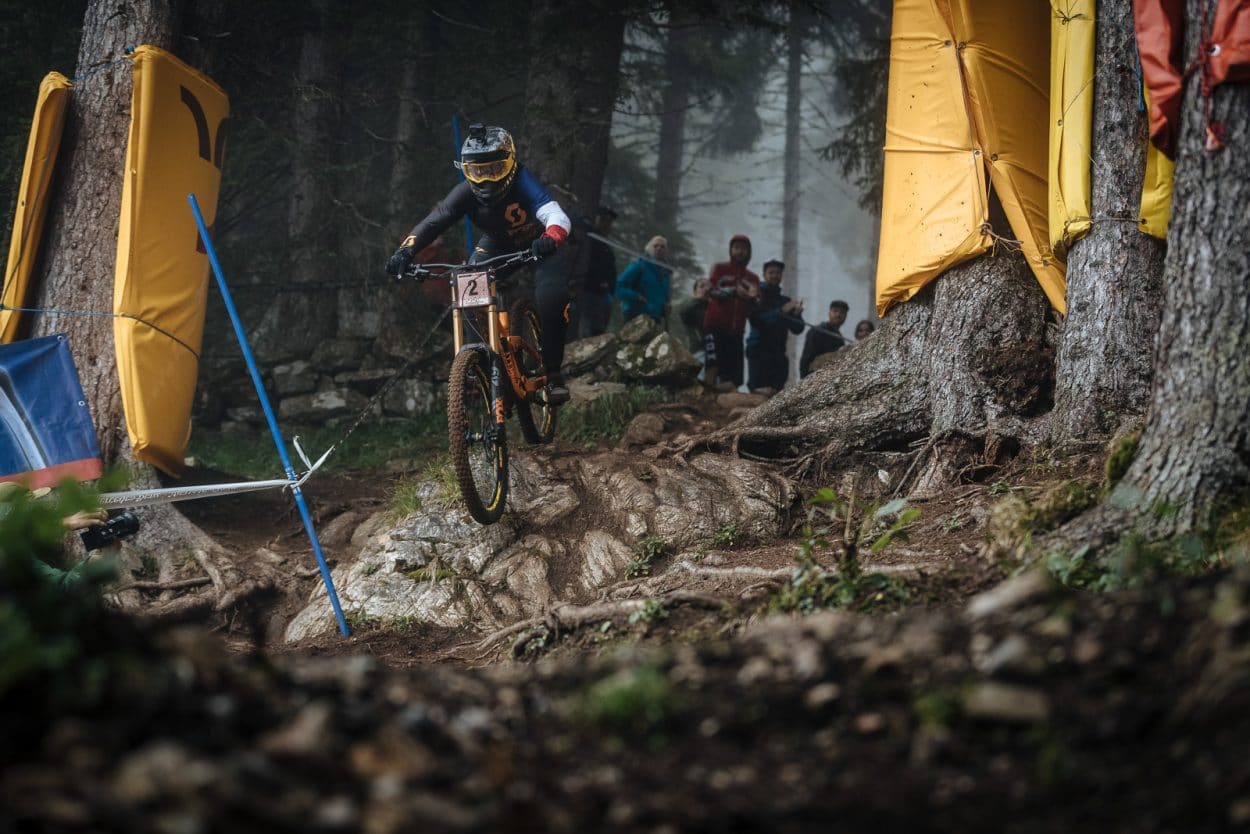 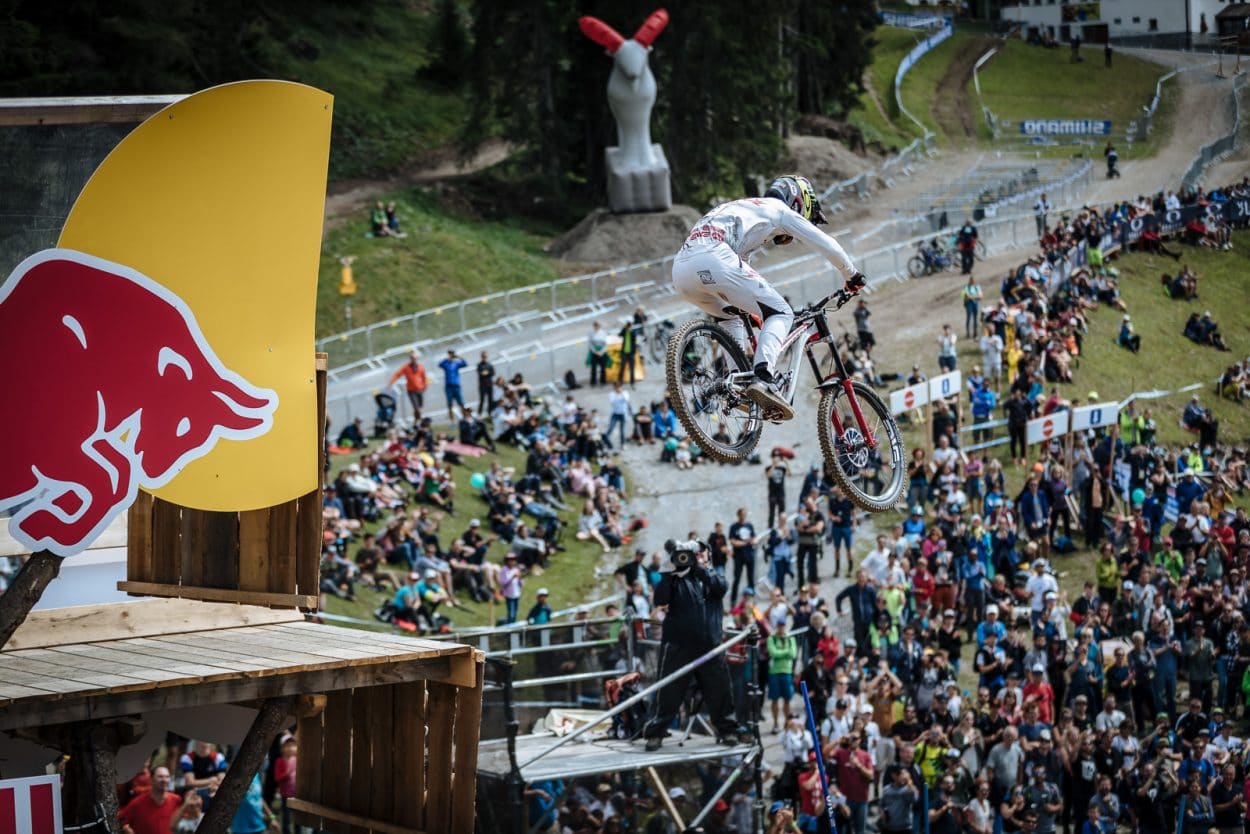 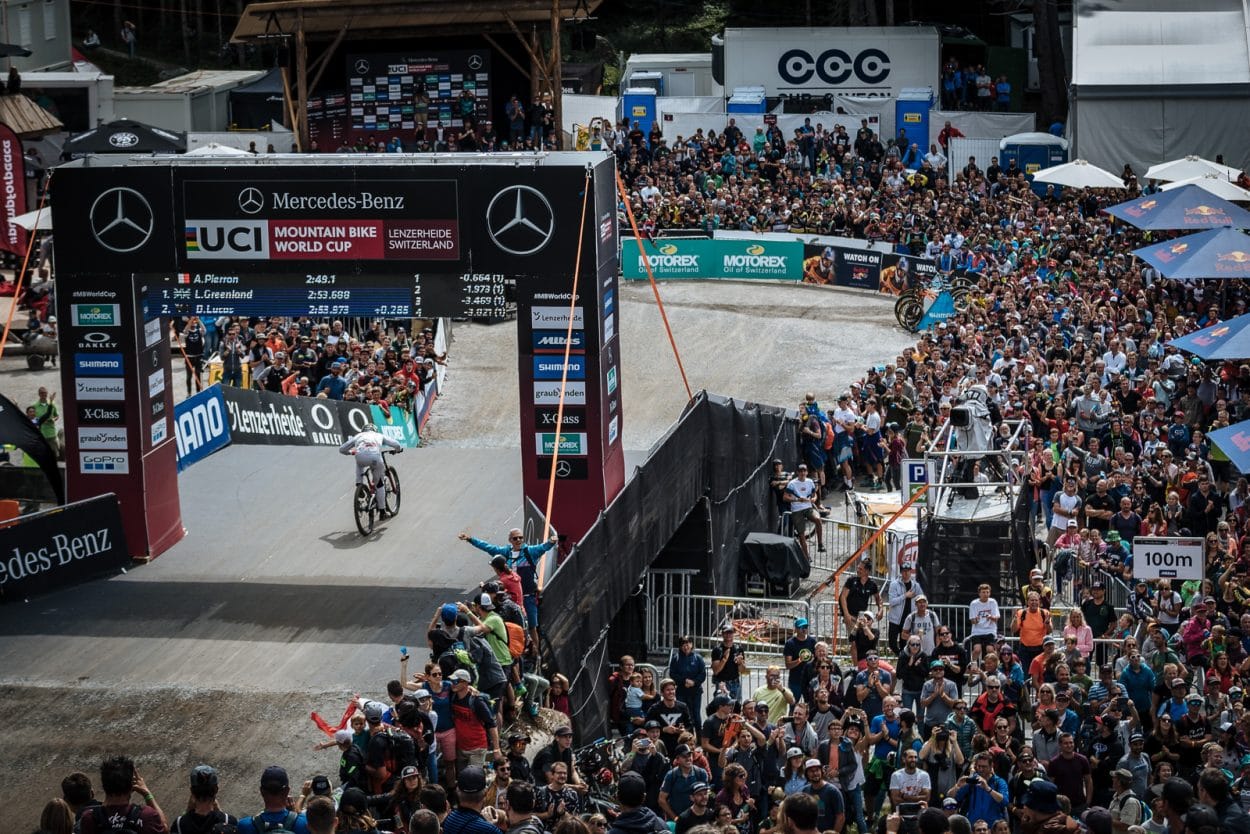 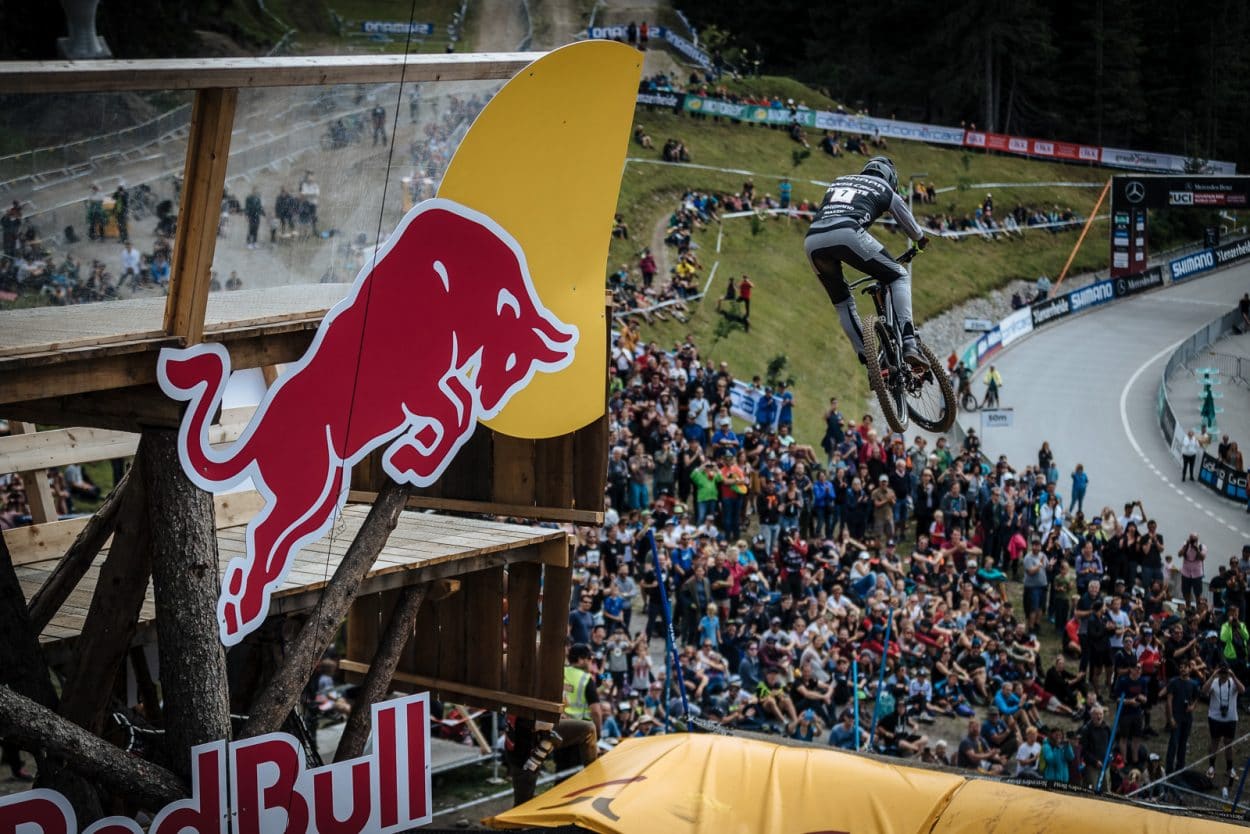 Amaury Pierron, who won in Fort William (SCO) and Les Gets (FRA), qualified in fifth and faced the Downhill showdown as one of the last riders. Pierron became the embodiement of “high risk, high reward” and managed to build his lead more and more with every split. Coming into ‘The Oakley Plunge’, Pierron found one of the fastest lines through the steep sections, which gave him a 3.5 second lead coming into the bottom half of the track. Not even a small mistake in the final sector could take his win away – with a time of 2:49.423, Pierron would demolish Greenland’s until then leading time by 4.3 seconds. While Greg Minnaar, one of the world’s best and most decorated Downhill riders, would have a narrow lead at the top of the track, the technical sections caught him out and the 21-time World Cup winner couldn’t keep up with Pierron. The record holder was able to make up time towards the bottom of the track, but would miss the hot seat by less than a second, finishing the day in second place. 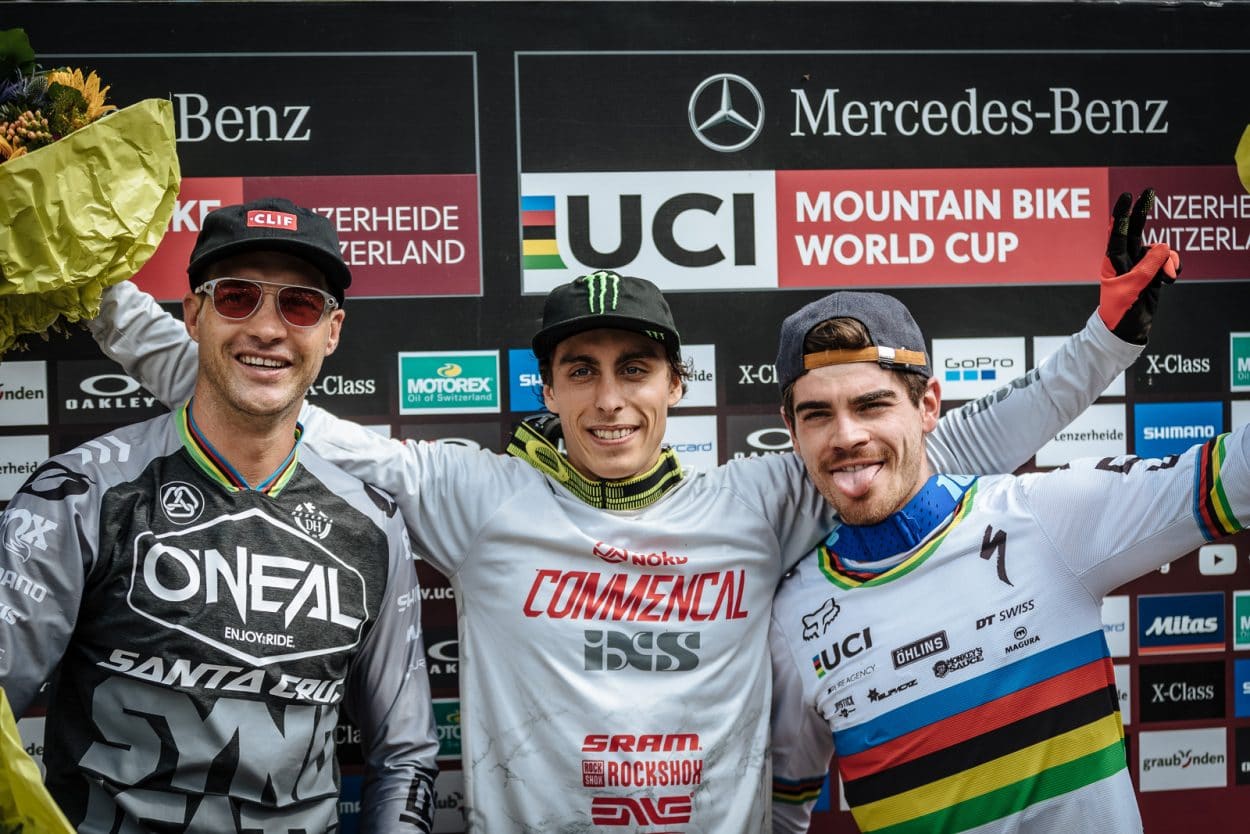 With his third World Cup win this season, Pierron closes the gap towards Overall World Cup leader Bruni to a mere 90 points – meaning that the decision for the Overall will be made in Snowshoe (USA). “Honestly, I didn’t expect this result after my big crash in training. I was already really happy with my qualifying result. That made me super happy. The track was less sliperry then I thought. I gave it my all and I’m so surprised. The win was of course important for the Overall World Cup. Let’s see what happens, but the race is wide open again,” said Pierron. “I had to improvise a bit because I didn’t know what the conditions would be. When I was at the top, I heard that Amaury took the lead with a great time and that influenced me a little bit, even if I tried to block it out. I made a small mistake and of course I was hoping for a better race. But it’s all good. The battle for the Overall is super close now. This is all completely new to me, so let’s see what happens,” said Bruni. 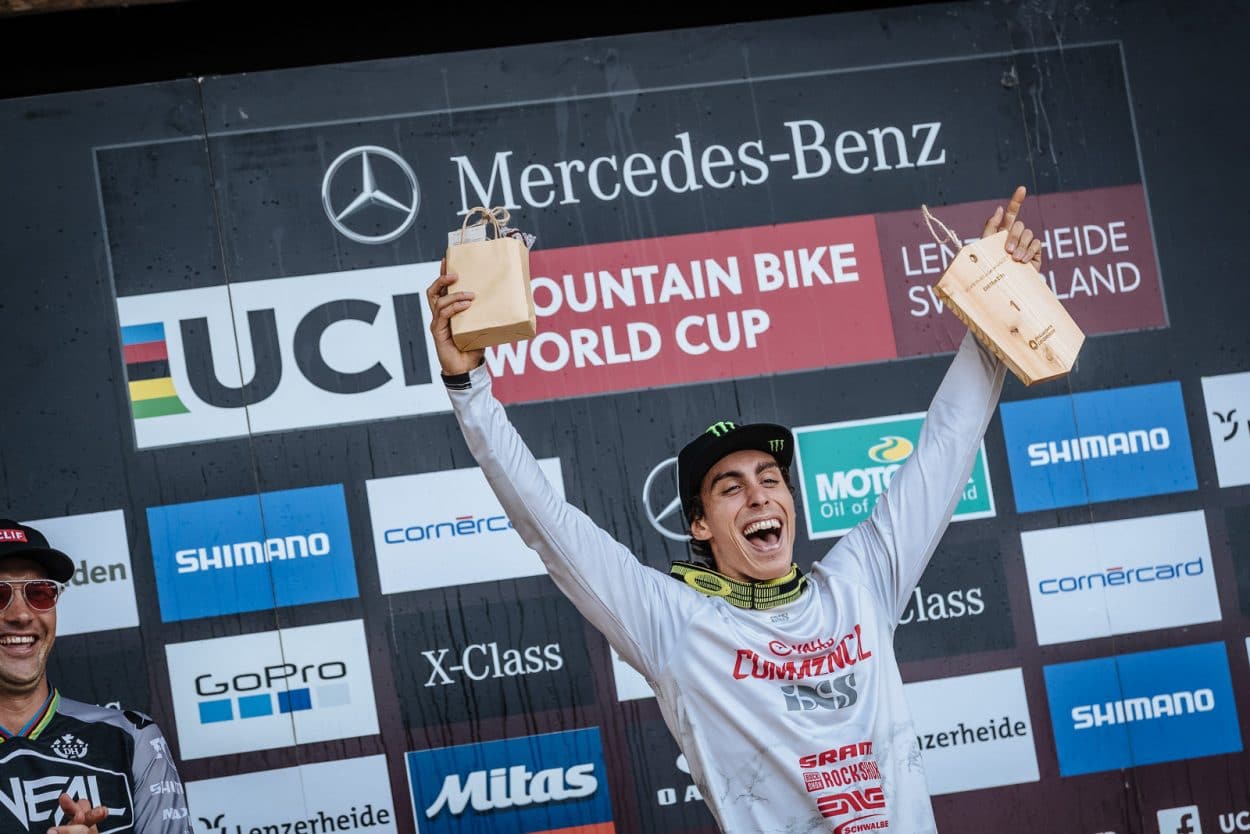 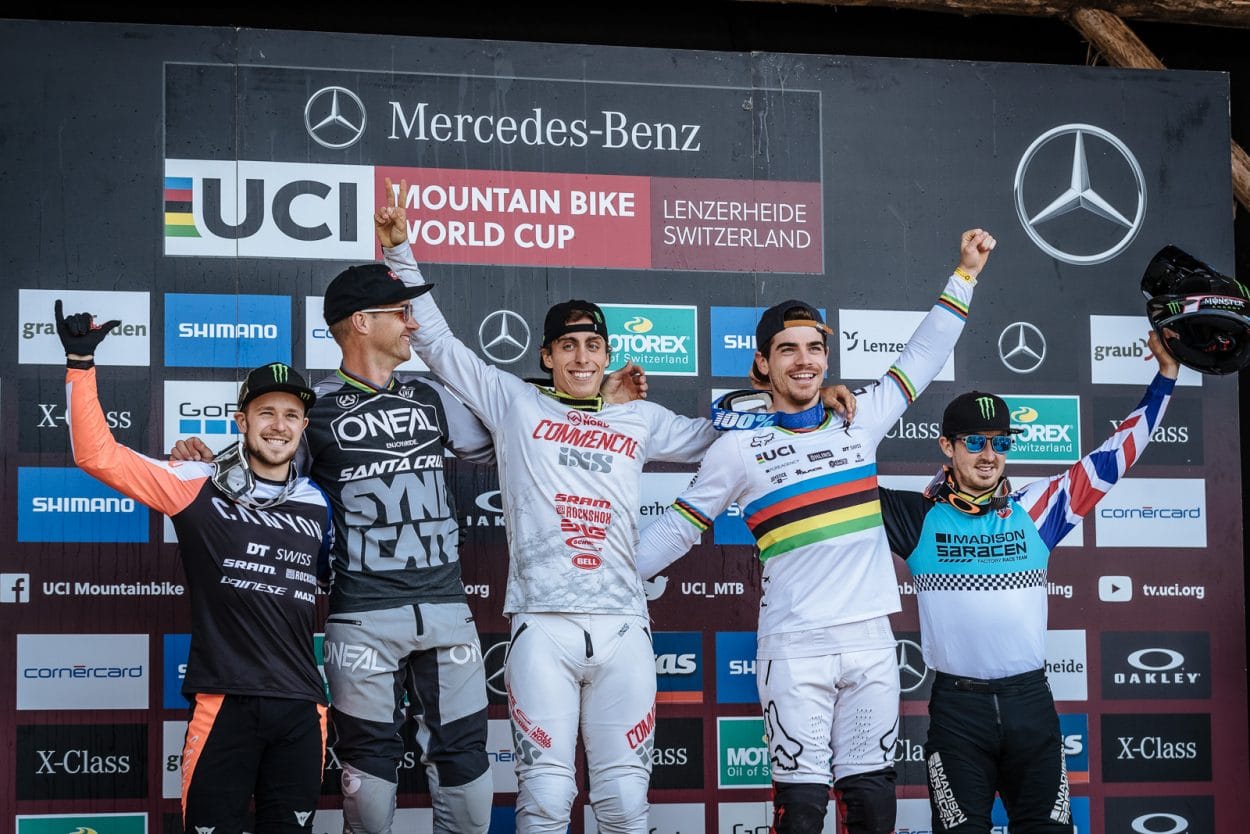 Sandwiched in between the French is a joyful Greg Minnaar: “The track was in great condition and it was an awesome race. I had a really good run. I’m stoked with second, but it’s just, every time I have a good run like here and in Leogang, I see these two Frenchies in front of me. They’re just really good. I really want to win a race this season and I’d love to beat them.” 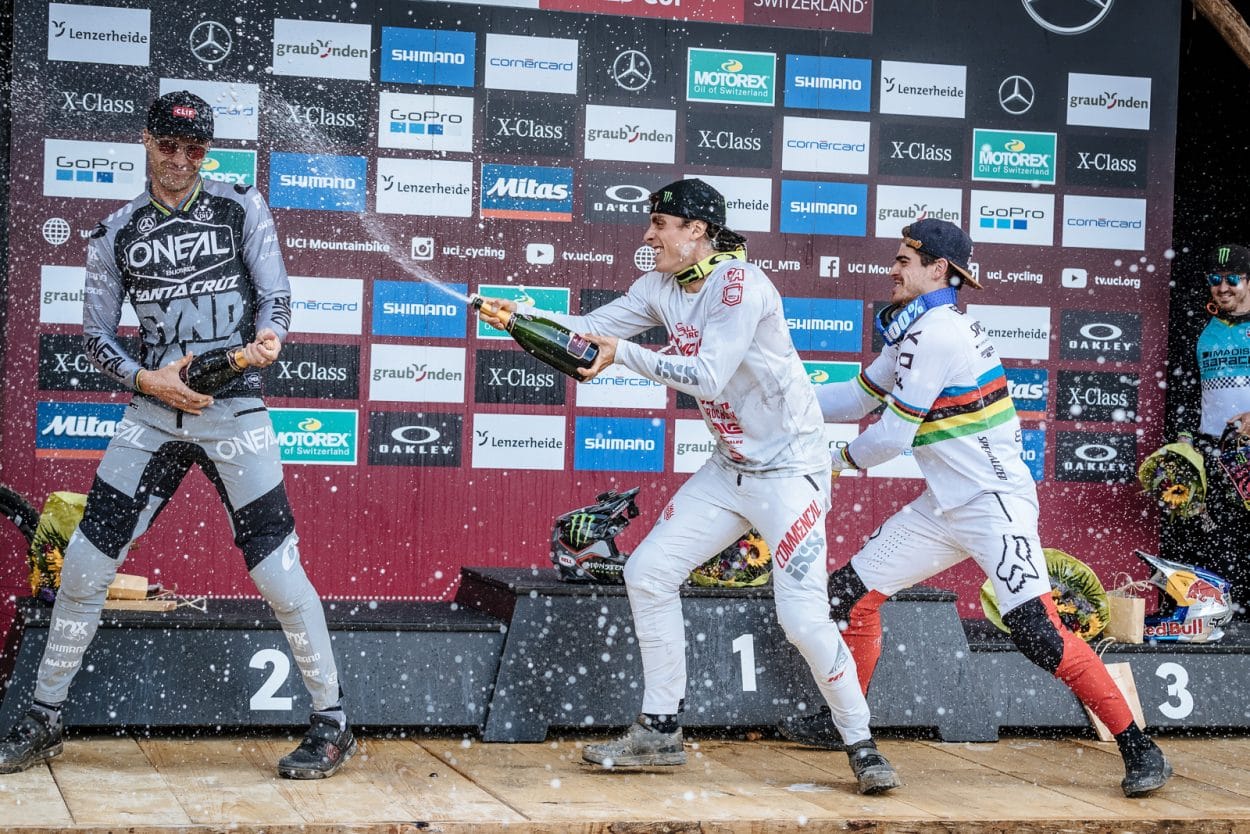 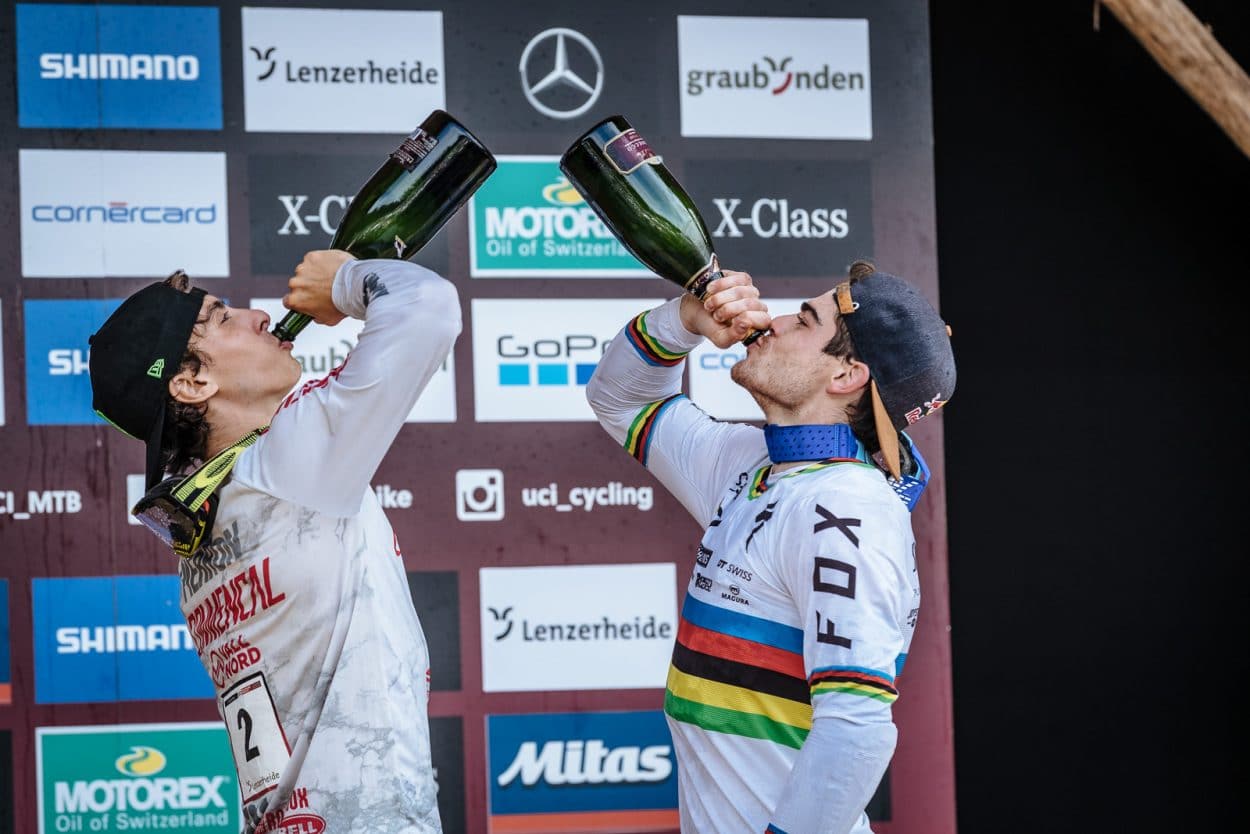 Höll and Sherlock take the win in Juniors

The Downhill action on Saturday was unleashed by the Junior Women. Vali Höll (AUT) once again showed her skills. The Austrian followed up her win in qualifying with a rocket-pace run during finals – crossing the finish line in 3:28.234, almost 30 seconds ahead of second-place finisher Nastasia Gimenez (FRA). Anna Newkirk (USA) came in third following a crash during her race run. With her fifth win this season, Höll has once again secured the Overall World Cup title. 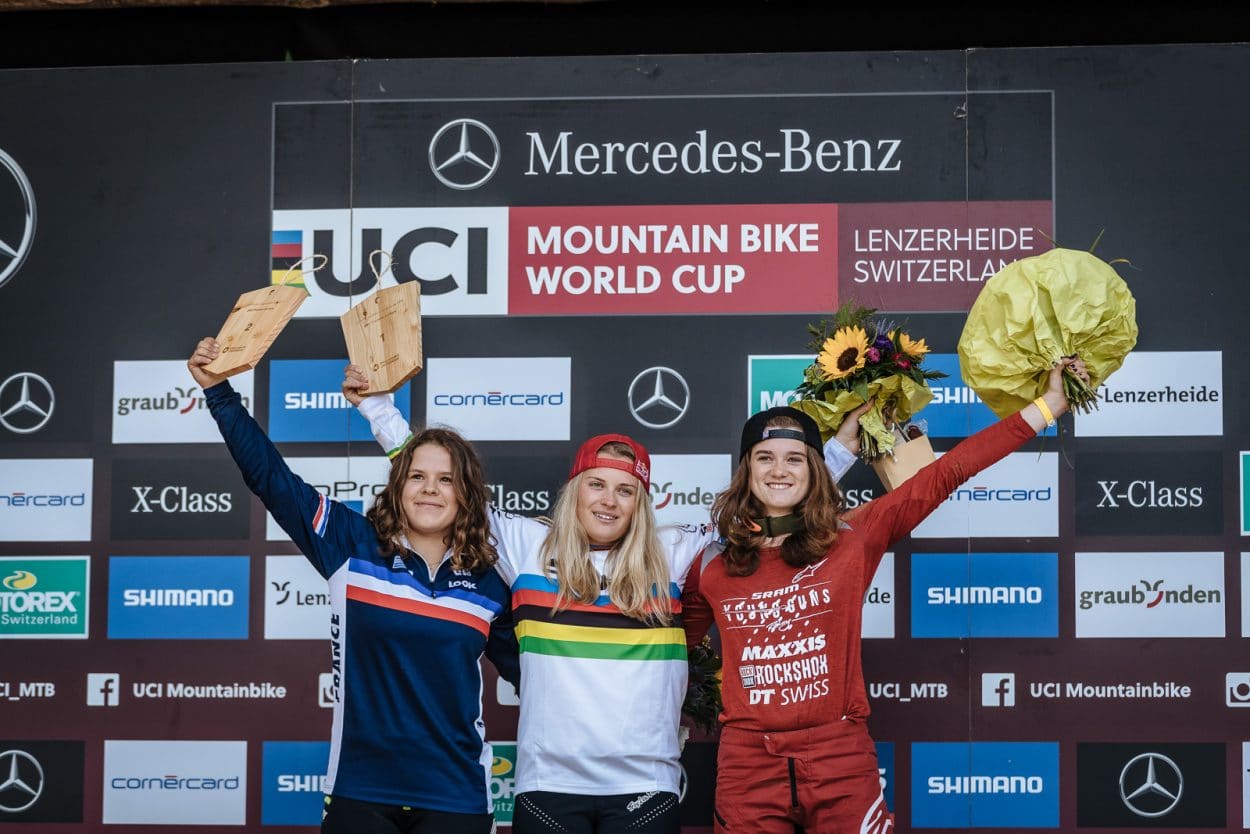 In the Junior Men race, Canadian Seth Sherlock would take top honors of the day with his first World Cup win and would be joined on the podium by Janosch Klaus (SUI) and Kiki Tuhoto-Ariki Pene (NZL). 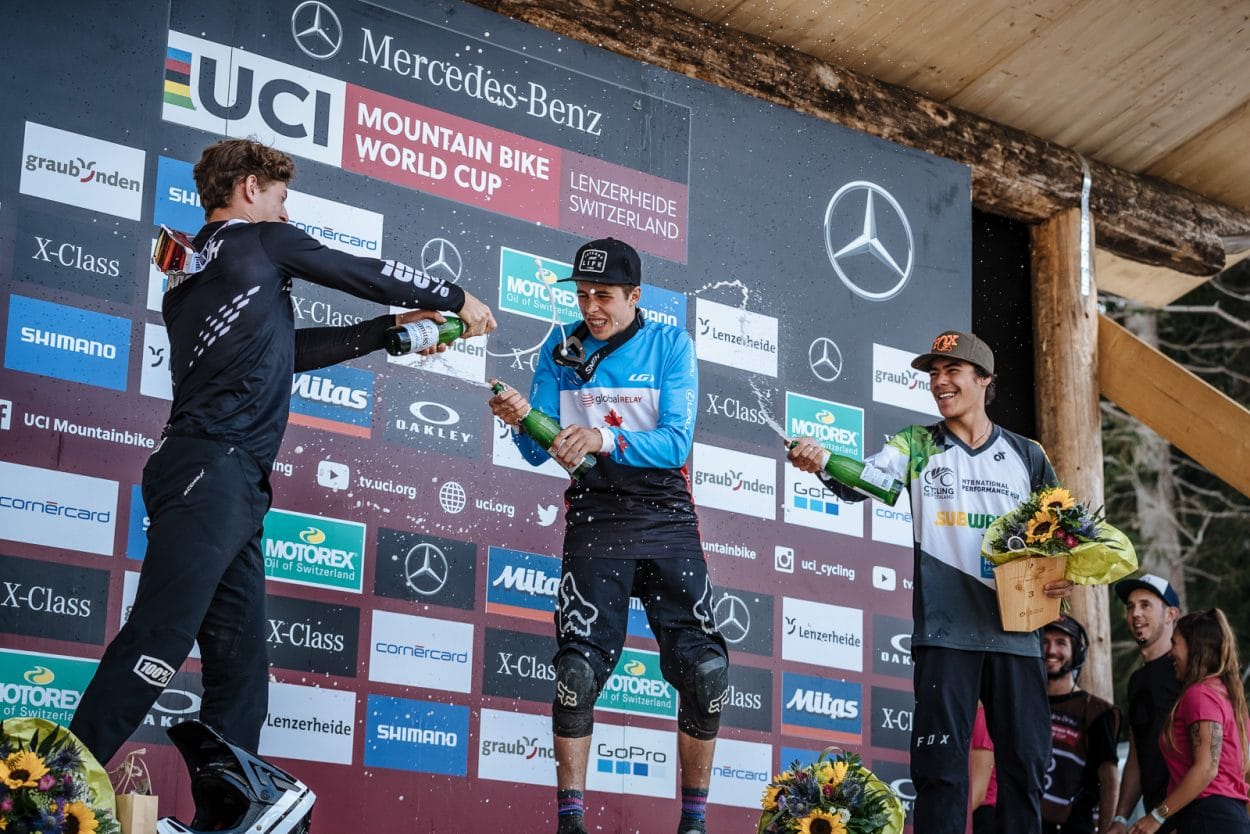