The world’s top slopestyle athletes threw down at the ninth Red Bull Joyride, but ultimately it was the Swede’s comeback story that got a little bit sweeter.

Emil Johansson has been called “the future greatest of all time” and today he reminded everyone why in an emotional and dramatic conclusion to the Crankworx slopestyle season.
To play out the final event of the dramatic 2019 slopestyle season, the top 14 riders in the world were given a redesigned course with some never-before-seen-in-slopestyle features to fight for the most prestigious win in the mountain biking discipline. 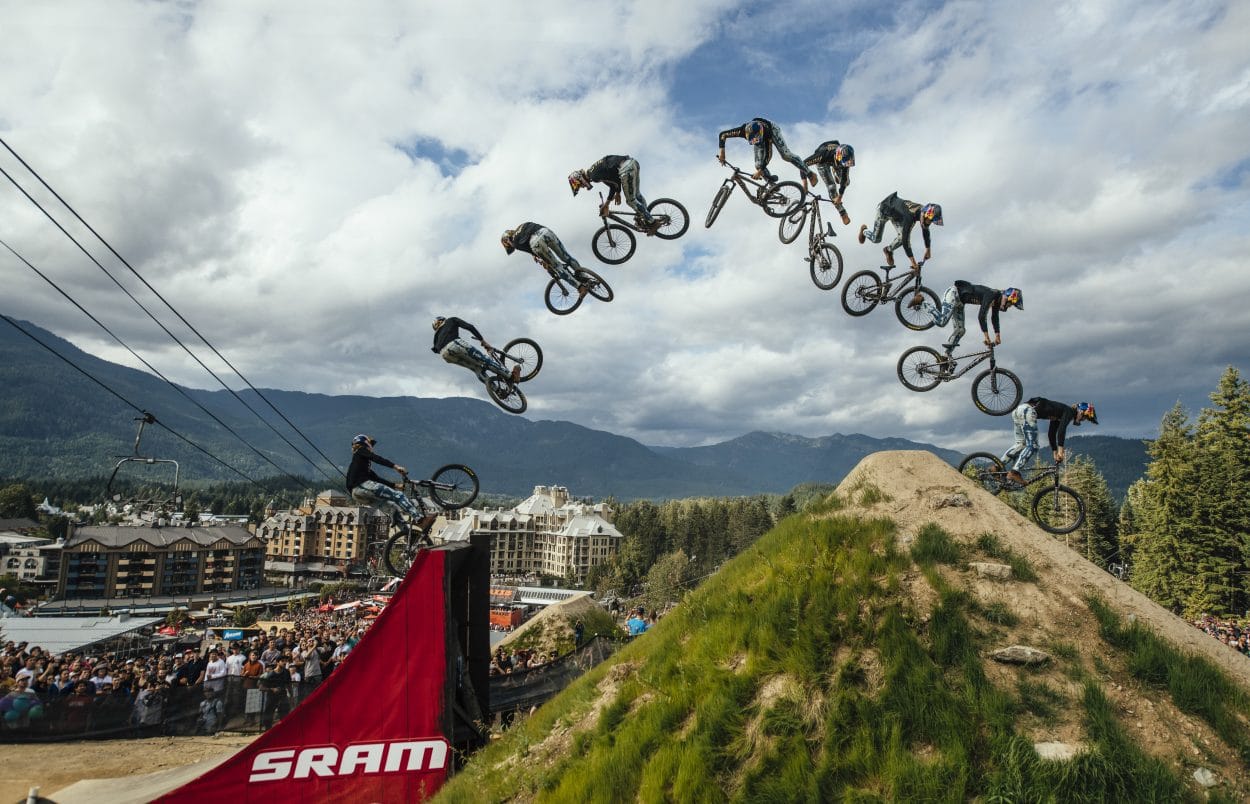 Coming into the event, all eyes were on current FMB leader, Brett Rheeder, to see if he could go three-for-three and take home the coveted Triple Crown. The prize is awarded to the slopestyle athlete who can win all three Crankworx slopestyle events (Rotorua, Innsbruck, and Whistler) in the same season. Last year, Nicholi Rogatkin made history as the first person to ever win it.
Those looking to steal the spotlight included Johansson, holding second place in the FMB rankings coming into Red Bull Joyride despite being sidelined with medical issues last year, and Dawid Godziek, who stormed into his first slopestyle season with a well-earned podium at Crankworx Innsbruck.
The new Red Bull Joyride course brought highs and lows
The first runs saw high scores from Johansson (95.75) and Godziek (91.75) to runs cut short by crashes from Lucas Huppert and Paul Couderc.
Going into the second runs, two things were clear: the riders would have to dig deep to make a play for first place and the judges weren’t going to tolerate any sloppiness.
The rookie Huppert would be the first to drop for second runs and with his family cheering from the sidelines he took a score of 84 to hold onto eighth place and secure himself on the tour for next year. 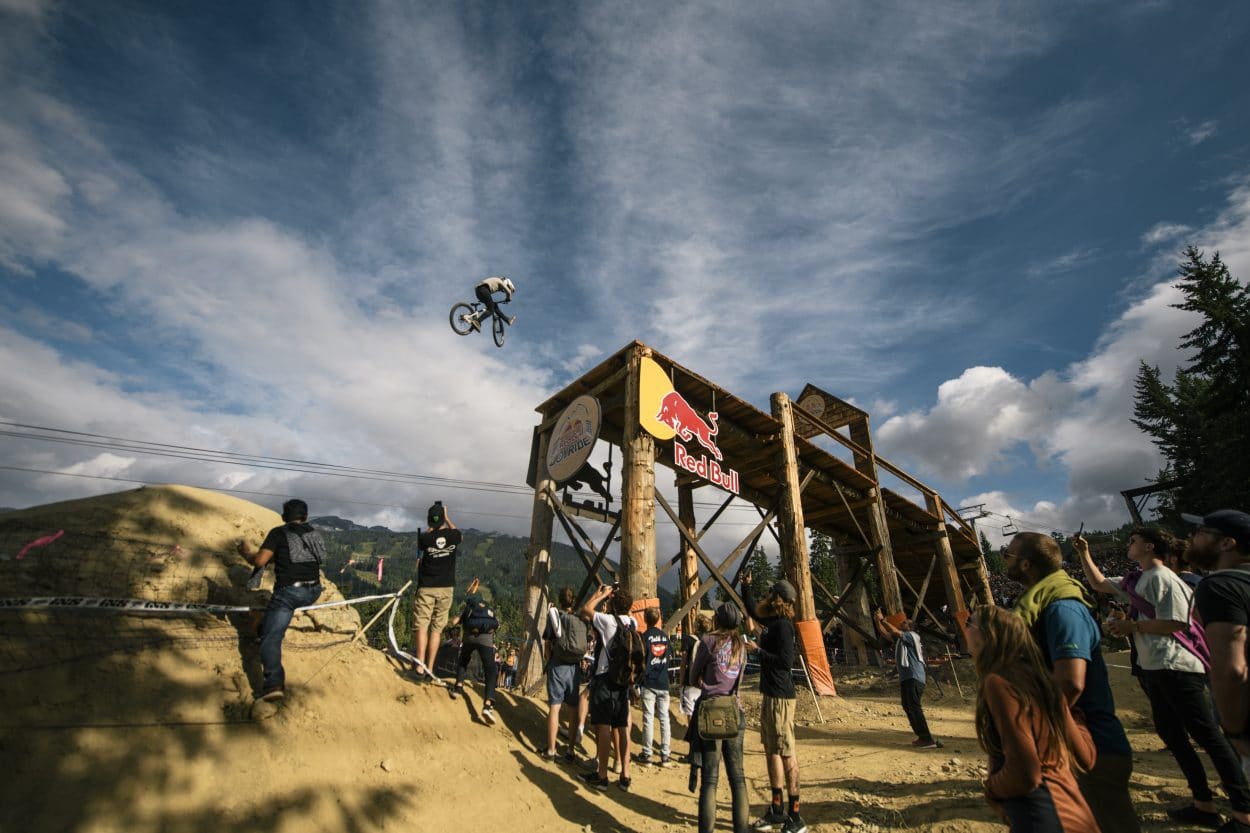 Fourteenth-place finisher: Paul Couderc
Crashes continued to plague some of the riders. Couderc, after crashing into the Toilet Bowl feature in his first run, had a heartbreaking end to his competition with a crash off the first feature as he attempted an opposite 360. After front flipping the cannon and performing a 360 Barspin Tailwhip, Lucas Knopf crashed on the Red Bull step up. Jakub Vencl, who suffered a sprained ankle in practice, landed a beautiful Backflip Tuck No-Hander off the cannon before landing his Cash Roll X-up Low causing him to case the shark fin. An over-rotation caused Tomas Lemoine to land heavily on his back wheel and lose his feet, putting a damper on his last run.
Torquato Testa and Diego Caverzasi’s final runs both ended with crashes also but their first run scores gave them sixth and seventh places respectively.
Max Fredriksson missed a trick early in his second run and disappointingly waved his run off, completing it without tricking the features. Erik Fedko did the same, missing the opportunity to commit to a Superman Seat Grab during his backflip.
Rogatkin finds redemption after a disappointing season
After a disappointing season, Rogatkin found some redemption today when he held onto fourth place with his first run score of 88.5. The judges loved his Cash Roll, 360 Double Tailwhip and Corked 720 but penalised him when he came up short on a trick, sending him into a wild Nose Manny that he saved, albeit narrowly. 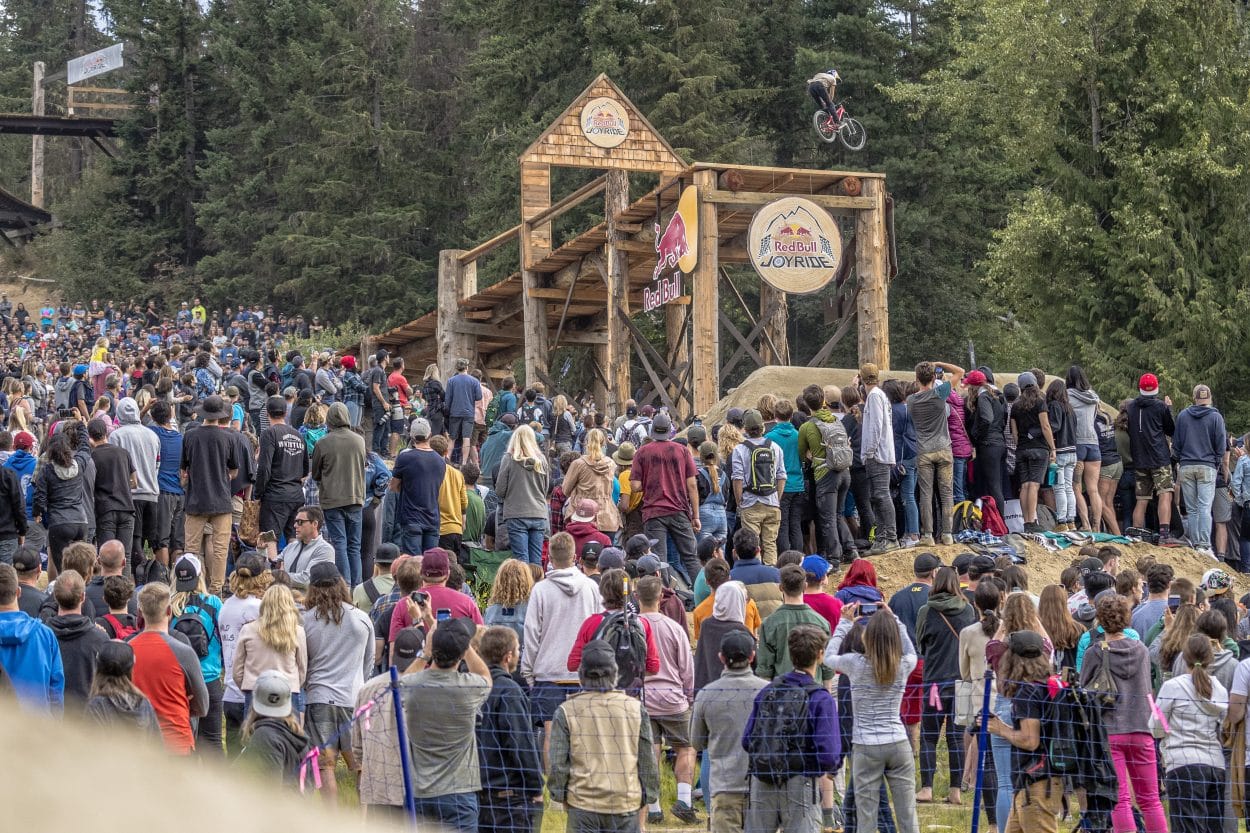 Despite crashing during his second run when trying to throw some variation into his Cash Roll he finished up and put huge smiles on the crowd’s faces. It was clear he was happy to have dug his way back up the ladder after crashes landed him down the results lists at the last two Crankworx stops.
Godziek proves that slopestyle skill is in the genes
Szymon Godziek’s younger brother, Dawid, made the jump from BMX to slopestyle this year and managed to not only take home a bronze in BMX Dirt at the X-Games, but two more in his first Crankworx slopestyle competitions: Innsbruck and Whistler.
Throwing a Backflip Barspin off the flat drop to start made it clear that he has the skills to be where he is. Then his massive Twister brought an eruption of cheers from the crowd. He followed it up with a Cash Roll Barspin and a triple Truck Driver into the toilet bowl, further stoking the crowd’s excitement. Finally, he ended with a Front Flip Tuck No-Hander into the whale tail with a Backflip Tuck No-Hander out.
His first run landed him with a 91.75 score, temporarily putting him into first before Johansson took the throne. Dropping into his second run, Godziek decided to play it safe with chill run to the finish corral. 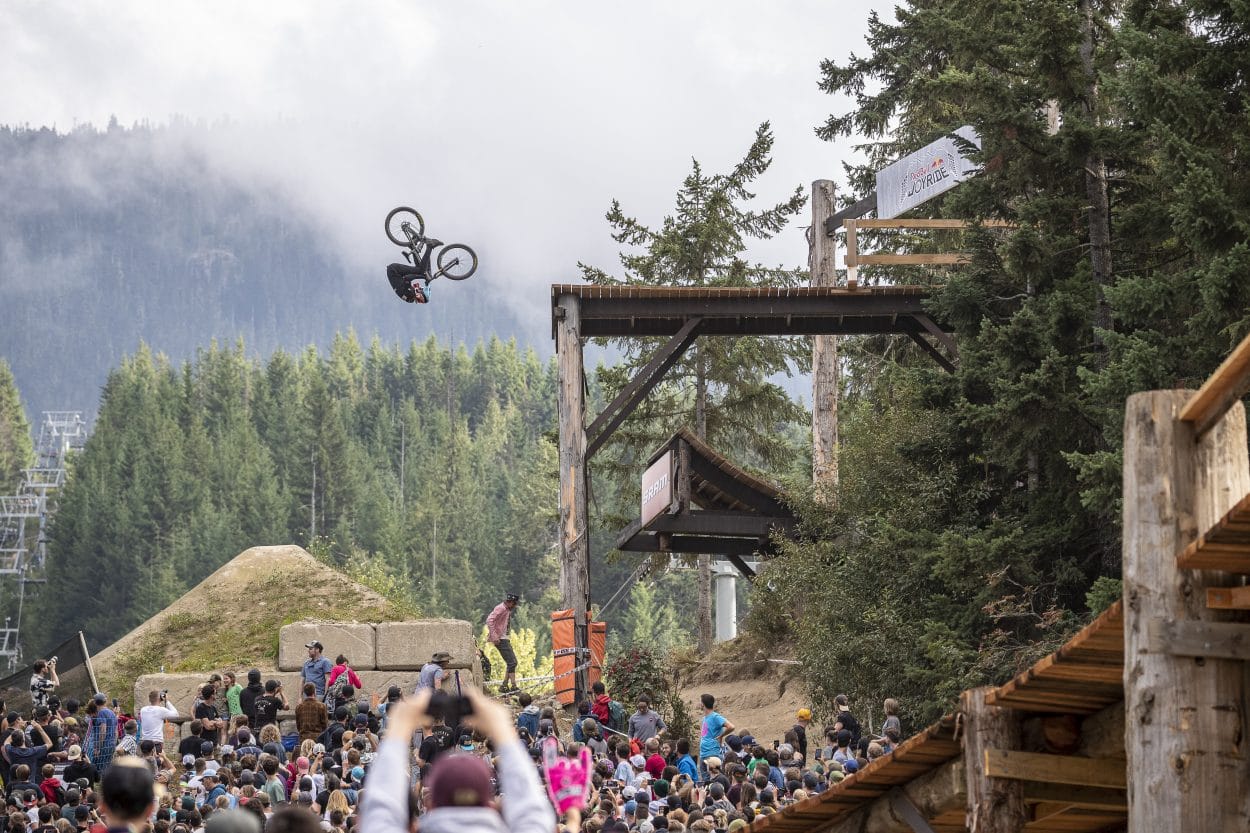 Second-place finisher: Brett Rheeder
Rheeder’s hopes dashed again for the Triple Crown prize
Rheeder’s first run had the audience holding their breath. The Canadian had a run packed with high-risk moves including a Front Flip off the start and a Backflip to Whip off the flat drop in the middle of the course.
In his first run, he threw a never-before-seen-in-competition Windshield Wiper (tailwhip in both directions) just before the toilet bowl and lost his pedals on the landing. Judges put heavy emphasis on clean runs this year and the mistake placed him in 10th place going into his second run.
His experience came into play for his second run, when he changed up the Windshield Wiper for a more polished Double Tailwhip. His smoother and better-executed second run included a Front Flip off the flat drop to start, Backflip Double Barspin off the cannon, an Opposite Cork 720 on the dirt-to-dirt feature, a smooth Backflip Tailwhip combo followed by a regular Cork 720 and a crowd-pleasing finish with a 360 Tailwhip into the whale tail and a Backflip Opposite Tailwhip out.
Grinning from ear-to-ear in the finish corral, Rheeder appeared to be thrilled with this performance despite his final score of 94.5 putting the Triple Crown trophy just out of his reach for a second time. But it would be enough to put him on the second step and for him to take the overall 2019 FMBA Slopestyle World Championship win.
When congratulated on his incredible run by the announcers, Rheeder replied: “I blew my mind too!” 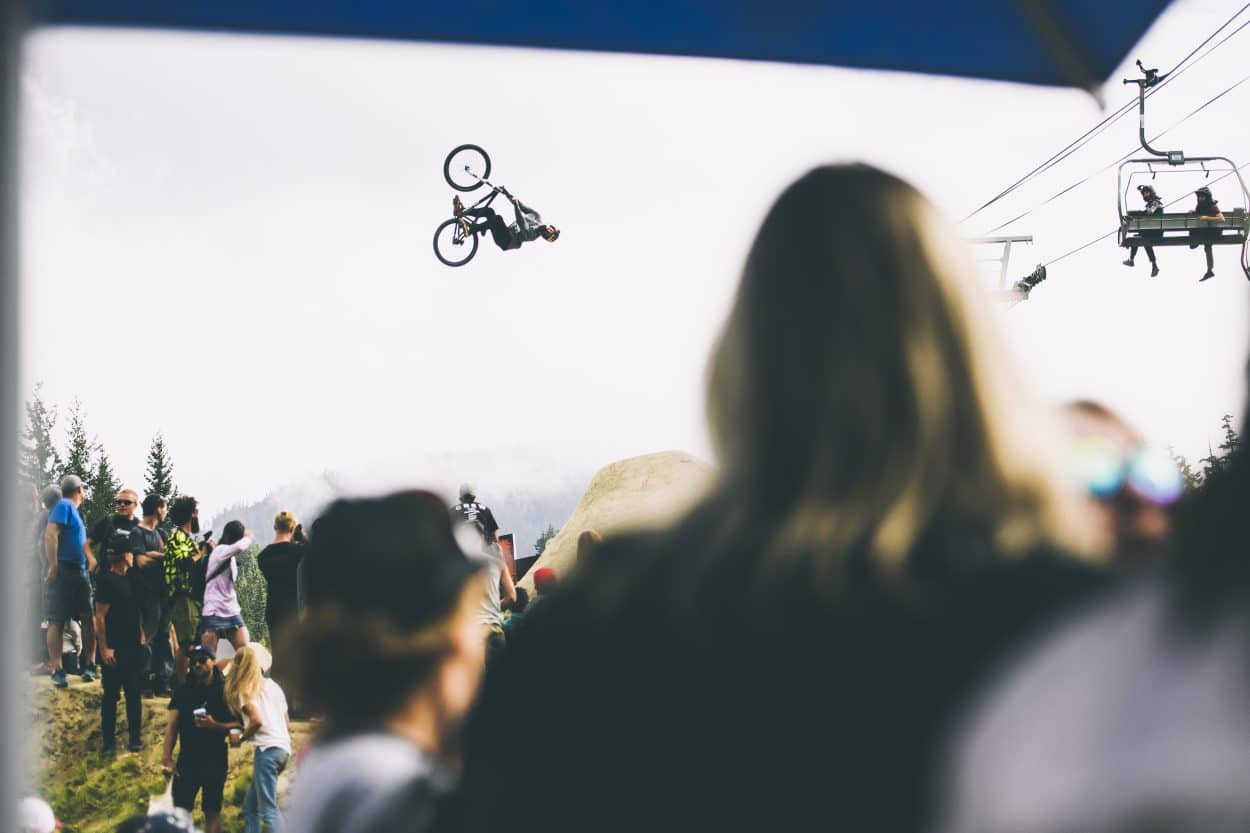 Third-place finisher: Dawid Goziek
An emotional Johansson takes his first Red Bull Joyride win
After what can only be described as a fairytale comeback, Johansson secured his first Red Bull Joyride win with a smoke show of a first run and a high score (95.75) that no other rider could touch. After missing the top step in Innsbruck by 0.5 of a point, he left nearly everything on the course today – although he indicated he held a few things back for a second run that wasn’t needed.
Right out of the gate Johansson demonstrated the depth of his bag of tricks starting out with a 360 Tailwhip and Opposite Truckdriver to Inward Table. He then immediately set himself apart from the crowd by throwing a huge Corked 720 on the left take-off of the Triple Threat. A double Truckdriver to Downside Tailwhip upped the ante before he punctuated his winning run with an opposite 360 Tailwhip in and a regular 360 Tailwhip Unturndown out of the final whale tail feature.
Following his crowd-pleasing victory lap, the other competitors rushed into the corral to congratulate him, ready to spray him down in celebratory showers. “Are you stoked?” Matt Jones asked after the ruckus calmed. An emotional Johansson responded: “F*ck yeah!”