Ever since Pivot produced the first aluminum Firebird back in 2008, we have been fans of its hard-hitting, long-travel attitude. Pivot has completely redesigned the Firebird to be a faster enduro race bike. Every model that has received Pivot’s new vertical shock layout and compact frame has seen a massive improvement across the board. And, the old EWS-winning Firebird was very good. So, to say we have high expectations for this new version would be an understatement. 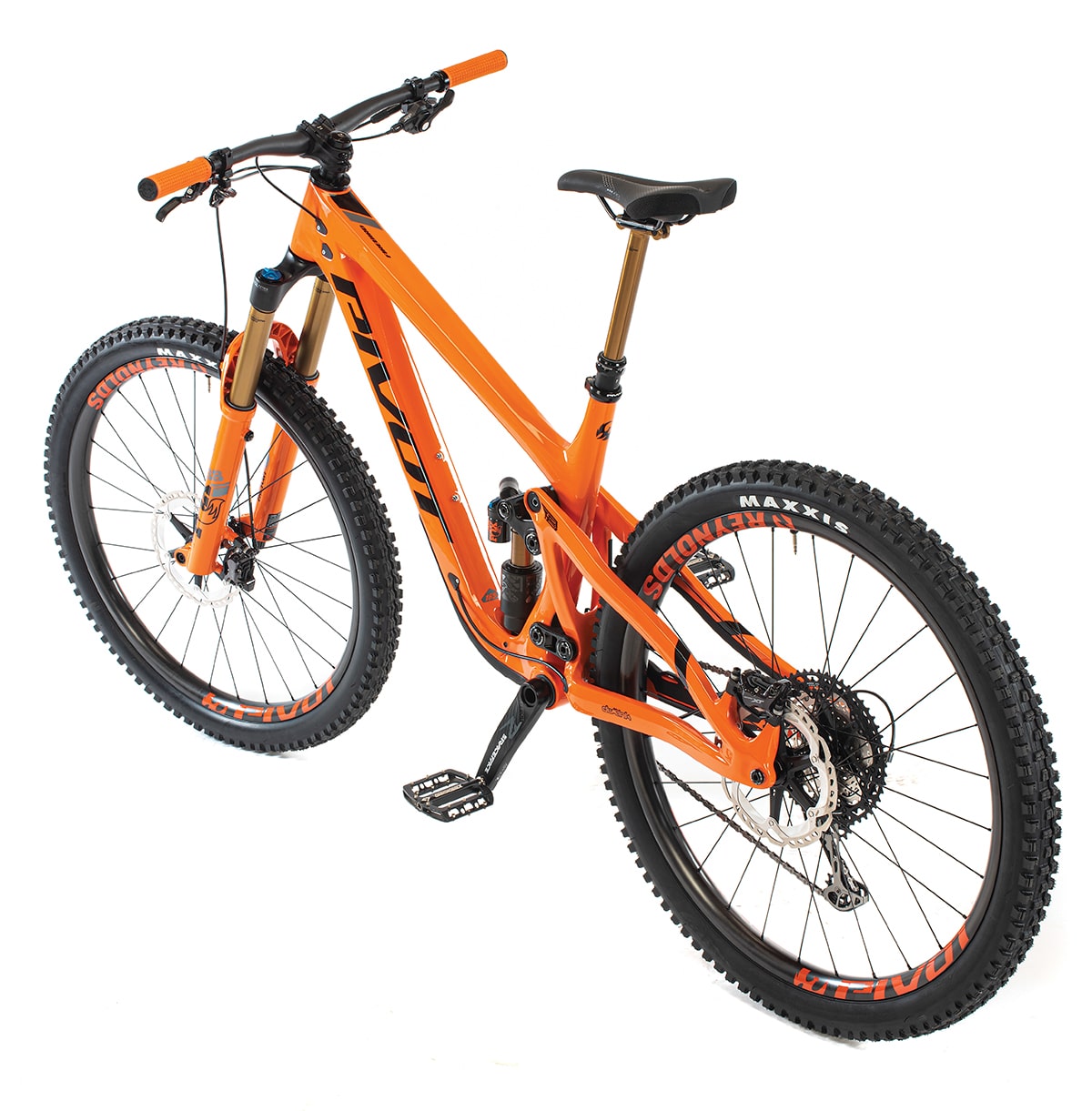 Like the last Firebird, the new one utilizes Pivot’s Hollow Core carbon construction and cable port system, but that’s where most similarities end. A new vertical shock layout allows for a more compact and rigid frame while still allowing for a water bottle and tool integration inside the triangle on all sizes. Each size features variable tube sizes and shaping, too. Along with that, specific geometry is utilized to ensure a similar ride quality across the size range.

The frame geometry is a little slacker and longer but not excessively so. Reach grows by 16mm, and the head angle is a degree slacker at 64 degrees. Things really change in regards to the seat angle and chainstay length though. The seat angle not only gets steeper by 2.5 degrees (size large), it varies by frame size, giving taller riders on larger bikes a steeper actual seat angle and keeping them better centered over the bike and bottom bracket. The effective angle is also measured by average saddle height per size, not at the top of the seat tube, giving a much more accurate seat angle number.

A first for Pivot, the Firebird also comes with size-specific chainstay lengths. This is done to keep the rider centered over the wheels more consistently between sizes, with both the front center and rear center changing, not just the front center as before. Changing the length per size requires a different mold for each size swingarm. Also new is a 31.6-diameter seatpost from a brand that has traditionally utilized the 30.9 size. Pivot claims the thicker outer tube of the dropper seatpost better supports the internals for improved reliability. A new universal rear derailleur hanger offers better availability at shops, rotates backwards for derailleur protection and features a ramp on the inner edge to keep the chain away from the frame when/if it moves around.

Pivot offers a staggering 20 different configurations for the Firebird in both Shimano and SRAM-based builds. Prices range from $6099 for a Race XT build to $13,099 for a Team SRAM XX1 AXS Live Valve build. Options include carbon wheel upgrades on Pro models, as well as air, coil or (as we’ve mentioned) Fox Live Valve suspension. Our test bike came with the mid-level Pro XT/XTR build, Reynolds Carbon wheels and Industry Nine hubs. From a value perspective, this build is probably what we would pick, with a solid drivetrain, Factory-level Fox 38 fork and Fox X2 shock. If we wanted to save some cash, we’d be perfectly happy skipping the upgrade and running DT Swiss XM1700 aluminum wheels. The house-brand Phoenix Team carbon bar and aluminum stem are high-end components that do not need to be upgraded. Pivot’s grips were comfortable and well-received by the wrecking crew, but a couple of the larger-handed riders wished for a few more millimeters in diameter.

Fox Live Valve has traditionally been set up to add firmness and efficiency to cross-country and trail bike suspension, but Pivot took a completely different approach on the enduro-focused Firebird. In the system’s electronically activated closed state, the Firebird’s Live Valve fork and shock are tuned with a feel and level of damping similar to a Float X2 shock. When Live Valve opens, it’s valved to be plusher and even more active than the standard air shock options for the bike. Pivot claims it’s like having ultra-plush, coil-over suspension front and rear without the weight while still having great all-around pedaling performance. We did not try the Live Valve option, but it’s an interesting and compelling departure from the normal setup. 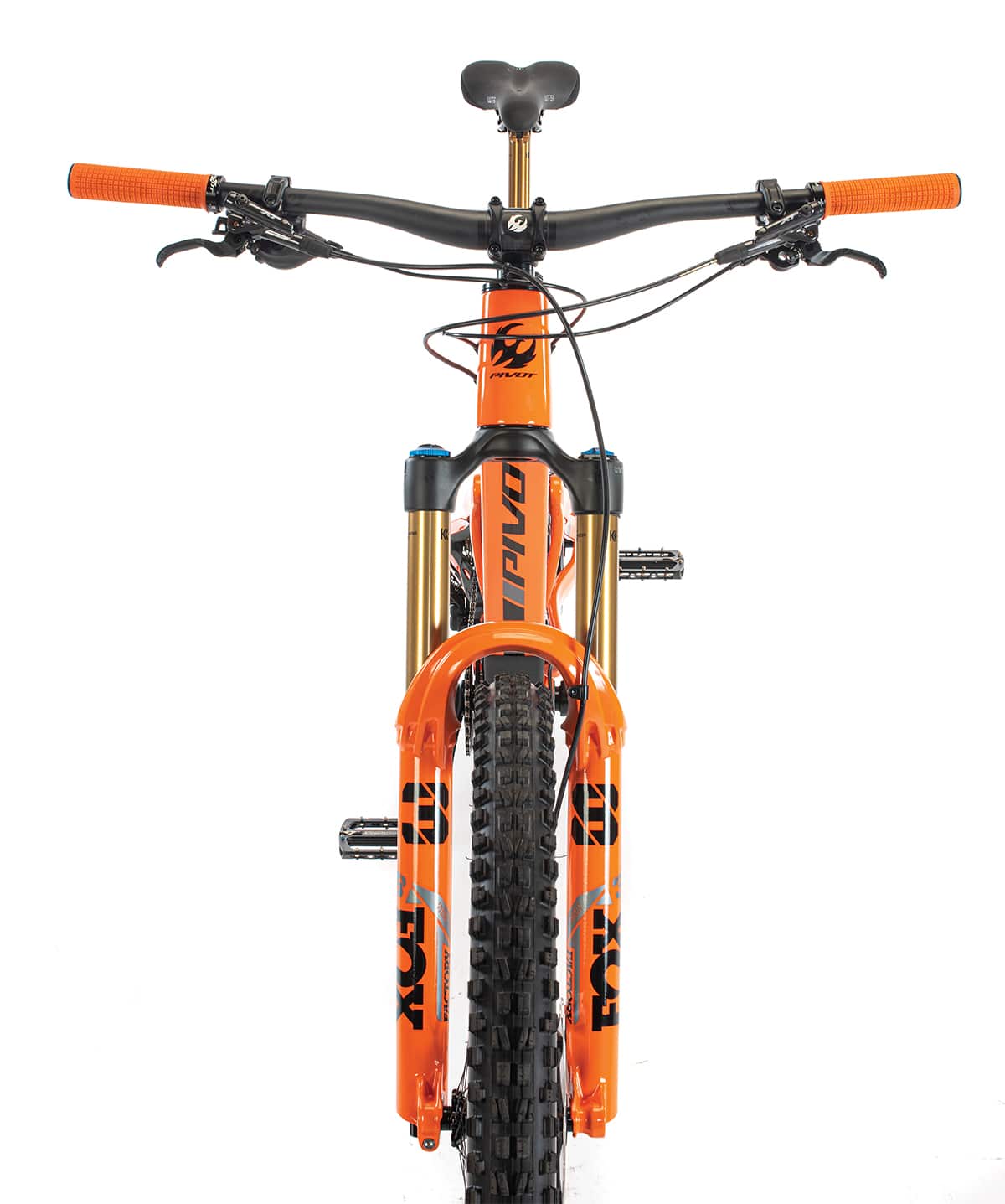 Like all Pivots, the Firebird utilizes dw-link suspension to achieve its 165mm of wheel travel. The major change on the new bike is its vertical shock orientation. Instead of being driven by a short clevis, the shock is now activated by a rocker link. A big advantage is reduced side loading on the shock for better durability on all versions, but particularly coil-shock versions because of their small shaft diameter and supporting bushings. The link also gives engineers more control over the leverage ratio. The shock layout allows for a more compact frame design and lower stand-over heights as well.

A beefy Phoenix downhill-bike-inspired lower link is longer on the new bike and said to have a more rearward wheel path to reduce hang on square-edge hits. It’s covered by a protector to keep muck out of the pivots and to keep small rocks and debris from getting lodged and ground up between the link, swingarm and frame or, worse yet, grinding on said link, swingarm and frame.

Since the chainstay length changes with each size, the Firebird’s suspension kinematics have to be adapted to match each size and to account for the difference in leverage created by the length and rider’s center of gravity. A carryover from last year is a Flip Chip in the swingarm’s linkage mount offering 0.6 degrees of head/seat tube angle and 6mm of bottom bracket height adjustment. The bike comes standard in the low setting, but those who want quicker handling with a 27.5-inch rear wheel, known as a “mixed” or “mullet” setup, can easily achieve that on this bike, too.

Climbing on an enduro bike is a means to an end—reaching a descent. So, it’s not the Firebird’s primary focus, but it still climbs very well. The steeper seat angle really puts the rider in a comfortable and efficient position, making long grinds quite tolerable. Pedaling performance is superb and active at all times with so little movement that the shock’s firming switch is not needed. In fact, we found the bike felt more efficient over rough, uneven ground while climbing with it off. Even on long, paved climbs to our favorite descents, we never felt compelled to reach for it.

One of the first things we noticed, even while climbing, is that this is a very stiff frame. It feels very unified and solid under power moves and big efforts. If you’re able to adjust your lines for the slack head angle and long wheelbase, the Firebird is an excellent technical climber. Compared to the slightly lighter, steeper and nimbler Pivot Switchblade that we happened to have on hand during testing, the Firebird predictably felt a little heavier and longer, and the front end felt floppier at low speed. Test riders raved about the Firebird’s steeper seat angle and comfortable cockpit feel though.

Point the Firebird downhill and things start happening fast. This is an ultra-quick bike that absolutely craves steep, bombed-out, chunky trails. We had to take multiple runs on trails we knew well to recalibrate our idea of fast. It took the roughest, steepest trails on our test loops to match the bike’s capabilities. The harder we pushed the Firebird, the better it worked. Superb frame stiffness means laser-accurate steering precision, and there’s nary a wiggle from the rear end. And, that efficient pedaling felt on the climbs pays dividends when powering out of corners, too. Between the ultra-stiff chassis and tractable suspension, it always went where we pointed it and rarely got out of shape. The wrecking crew’s Strava PRs were set without really trying, and comments such as, “It corners like it’s on rails,” were common.

If we had a complaint about the previous version, it was that it really required a skilled pilot pushing the bike hard to make it work, and the new one is somewhat similar but with a somewhat broader appeal. It’s more forgiving to ride at slower speeds and has a seemingly higher threshold when pushed to the edge. At a more casual pace, the bike feels good, but it’s still a bit chattery and stiff compared to some others in its class. The Firebird is like a high-end sports car with race-tuned suspension that feels firm in a parking lot but ultra precise and controlled at speed. Turn up the heat, and the Firebird absolutely comes alive.

The latest Firebird is such a solid performer that we had to struggle to find anything we’d like to see changed. When we look at the bike, almost all the hardware is hard anodized or coated black, making the silver cable-port cover bolts stick out like tiny sore thumbs. It’s one of the few things that bugs us about the brand, especially since Pivot is so detail-oriented on all of its bikes. Thankfully, the solution is as simple as a black Sharpie marker. In a few minutes, the silver screws can be colored black to match the port covers. It looks much more cohesive, but we wish Pivot would do something that’s more permanent.

If you race enduro or just see each climb as a path to the next technical descent, look no further than the Firebird. It’s easily one of the best enduro bikes we’ve ridden. However, as good as the Firebird is, it’s not for everyone. You need to be deliberate about going fast and be honest about your ability. There are other bikes in the class, even in Pivot’s line, that are less demanding for novice riders and slower riding. We imagine a coil shock or Live Valve version might offer a plusher, more forgiving attitude, but the geometry and frame stiffness will still be there. If you’re looking for something that won’t hold you back as your skill improves, or you’re already knocking on the door of a pro license, the Firebird is the kind of enduro bike that will let your riding take flight. 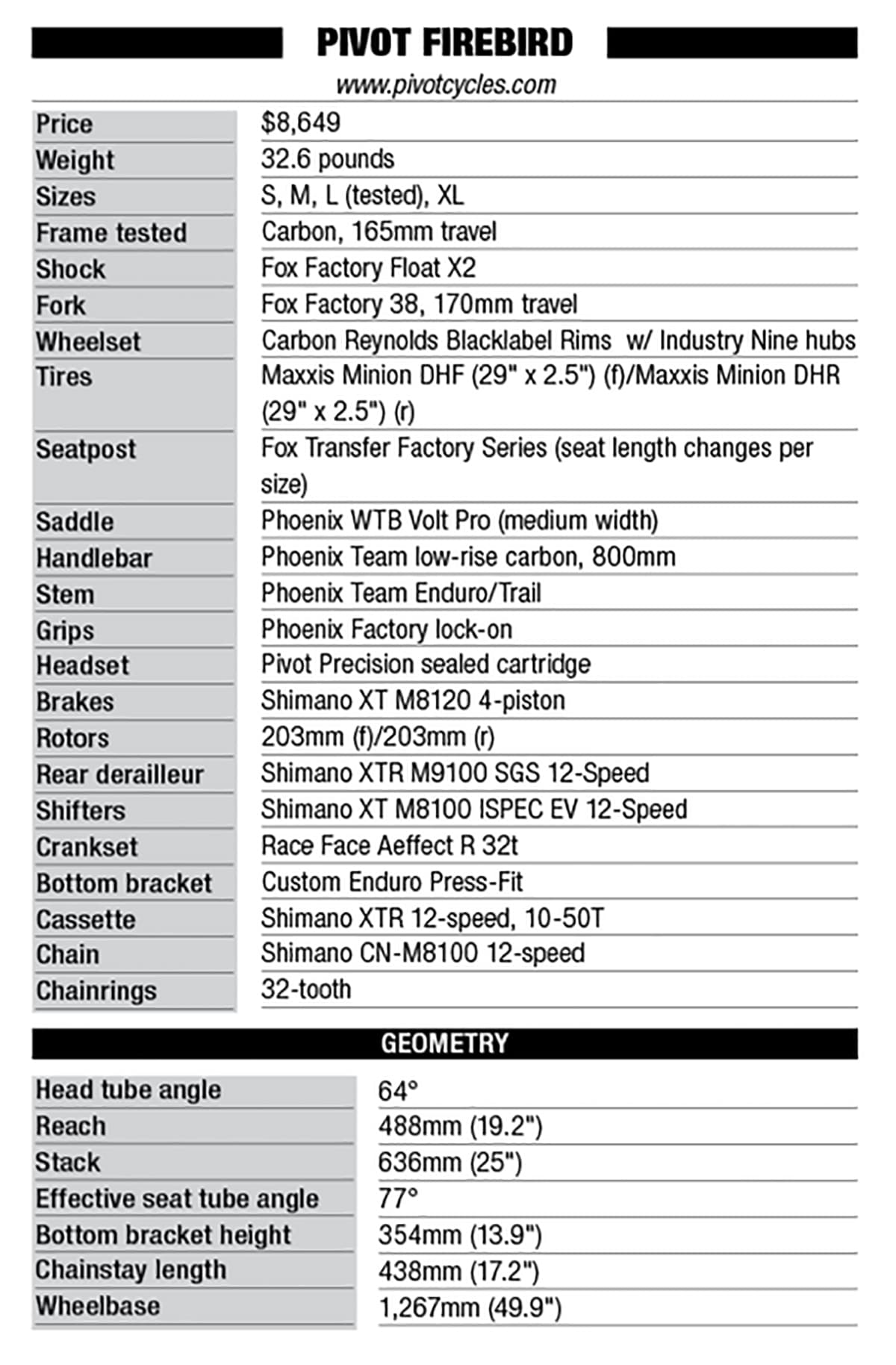 HOW TO PACK A BIKE FOR SHIPPING