We picked two of the most popular hitch-mounted bike racks, both of which are designed to haul bikes without removing wheels or scratching up the paint, and mounted them to two Mountain Bike Action vehicles. 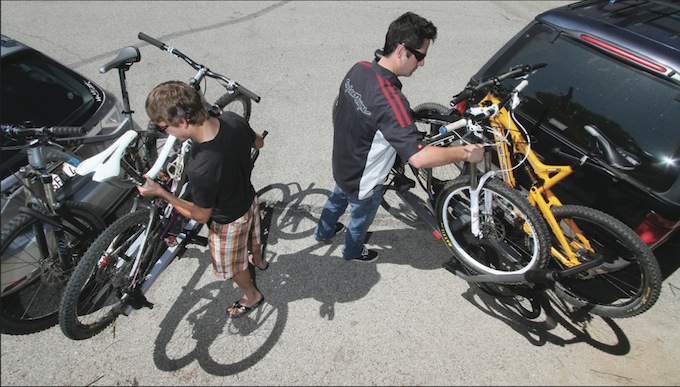 Tech features: Both the Thule T2 and Yakima Holdup racks are designed to carry two bikes in an upright position. The racks easily install into a standard 2-inch hitch receiver and are secured by a single bolt that is designed to eliminate any movement between the rack and receiver. Both racks come supplied with locking mechanisms. The Thule T2 includes a hitch-receiver lock and individual cable locks that are integrated into the ratchet arms to secure the bikes. The Yakima has a single cable for both bikes that doubles as the hitch lock by attaching to the hitch bolt. Both companies make a version for 1 1/4-inch receivers too. With bikes attached to the carrier, both racks fold down to give you access to your trunk or tailgate. 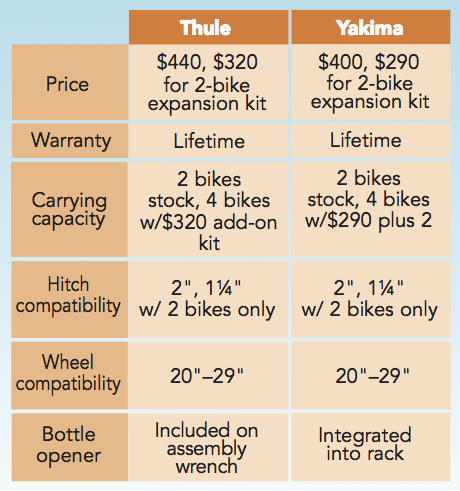 Field test results: Both racks were relatively easy to assemble for the mechanically inclined. Each rack had a slight hiccup in the quality control department. One of the SecureHook ratcheting arms on our Thule was installed incorrectly from the manufacturer, causing the arm to pivot sluggishly. The problem was caused by the improper installation of a nylon spacer; it was an easy fix. On the Yakima, the hitch bolt did not thread in easily. We ended up having to tap the threads to get it to fit. Neither of these were deal-breakers. Once these issues were resolved, the setup was a breeze and the racks fit securely with no problems. Advantage: Tie.

Both racks will secure the bikes well on a long trip. The folding mechanism on the Thule was considerably beefier than on the Yakima. On top of the added beefiness, the lever for folding the rack was easier to use on the Thule compared to the pull-pin design on the Yakima. Advantage: Thule.

The similar ratchet arms on the racks were both easy and quick to use. At the end of the day, the Yakima system was more intuitive. We appreciated the Yakima’s folding wheel trays that would hold the bike up while mounting. We also found the Yakima’s rear-wheel straps easier to use than the Thule’s. Advantage: Yakima.

Being able to lock the hitch pin and each bike individually means the Thule’s security system wins out. Advantage: Thule.

Thule throws you a bone by including a bottle opener on the assembly wrench, but what happens when you forget to bring it to the trailhead? Yakima’s is built right into the rack, ensuring you won’t be without a frosty beverage at the end of your long ride. Advantage: Yakima.

It was obvious this would be a close match. We corralled the wrecking crew for a timed shootout to determine the fastest rack in the West. When it was all said and done, we were able to load two bikes onto either rack in less than a minute. Advantage: Tie.

Both of these racks rock, our vote would be to support your local bike shop and purchase what they carry. Like us on Facebook

Photo of the Day: Bryson Martin Jr. at Whistler, B.C.