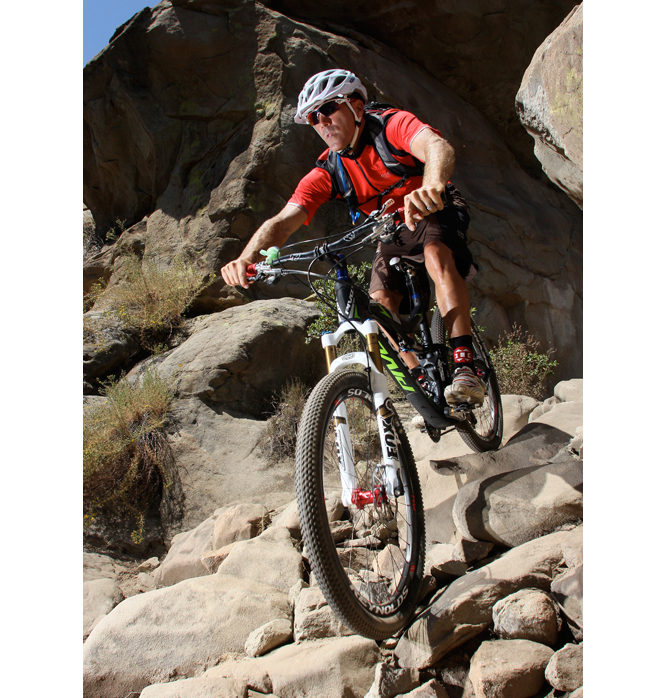 Floating on rocks: The fork performance will have you choosing lines where lesser forks fear to tread. The fork and shock are sophisticated and highly adjustable suspension components that offer lots of tuning options. Use them.

Fox is not a company known for resting on their laurels, and their 2013 shock and fork line is proof that there have been plenty of long days and nights for Fox’s design and engineering team. It seemed best to start our 2013 testing with the suspension products Fox offers for the largest segment of mountain bikers: trail riders. Using a Pivot Mach 5.7 Carbon as our test sled, we mounted a $440 Fox Float CTD Boost Valve with the Trail Adjust shock and an $810 Fox 32 Float 150 FIT CTD with the Trail Adjust fork. 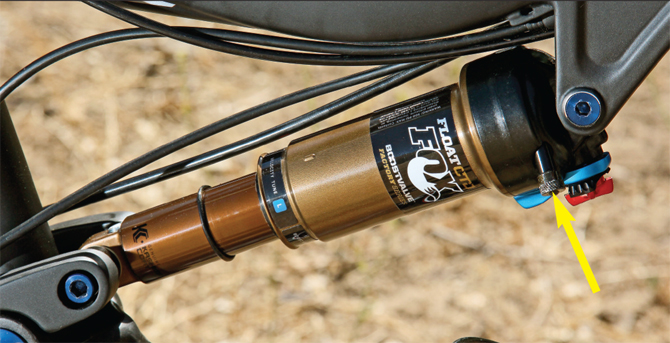 Travel control: The CTD is sure to spike a lively conversation at your after-ride pizza feast. It means many things to many people, but don’t expect to find agreement. The pesky Schrader valve blocks your finger when reaching for the CTD lever.

Tech featuresshock:
Fox’s top-of-the-line air-sprung shock is part of the Factory series of suspension products, and the 7.875×2.25-inch shock barely nudged the scale at 9.1 ounces. The gold Kashima coating is claimed to allow the shock to move through its travel more smoothly while increasing durability. Our shock used Fox’s Boost Valve technology. This internal damping circuit instinctively adjusts to pressure from the internal floating piston and shock shaft speed to provide both a firm ride while pedaling and a bottomless feel when slamming something hard. New polymer bushings (in the shock’s eyelets) replace the DU bushings of old that proved to be the weak link for many suspension designs. The biggest change, however, is replacing the ProPedal feature with CTD. That stands for Climb Trail Descend, and manifests itself as a blue lever that selects the climbing mode, trail-riding mode or descending mode. Fox offers remote actuation, either mechanically or electrically, for CTD shocksalthough our bike was not equipped with either. Our shock takes the CTD concept a step further with an added Trail Adjust feature that allows the Trail mode to be fine-tuned to three predetermined damping settings from softest (1) to firmest (3). Inside the CTD lever is an external rebound adjuster. There are five Float shocks in the line. 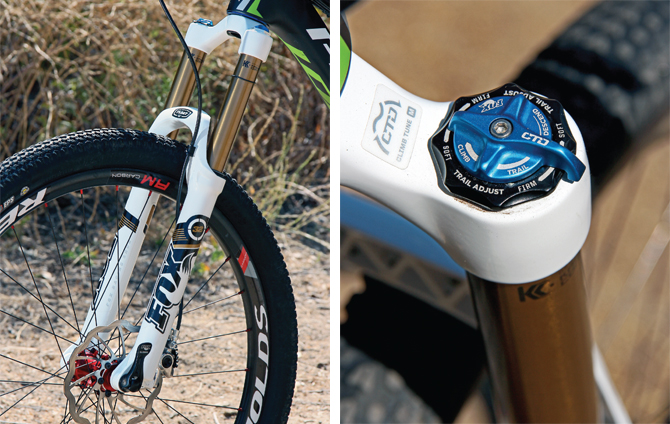 Gold standard: Packed with Fox Isolation Technology (FIT), a tapered aluminum steerer tube, Kashima coating, a 15 QR axle and 5.9 inches of travel, it is hard not to believe this fork will enhance any trailbike it is mounted to.

Tech featuresfork:
Sharing many of the technologies of the Float shock, the 32-millimeter-diameter stanchion tubes get Kashima coating. The 5.9-inch-travel fork also has CTD with the Trail Adjust option and an external rebound adjuster. Internally, the fork uses Fox Isolation Technology (FIT) to keep the air and oil separated so the fork is less likely to lose damping control and performance when pushed hard. The front wheel gets clamped with Fox’s 15QR axle/retention system (co-developed with Shimano), and our fork used the 1.5-inch tapered aluminum steerer tube to match the Pivot’s tapered head tube. Our fork weighed 3 pounds 14 ounces.

Field test results:
Both the fork and shock mounted easily to the Pivot test sled. As with the Fox forks and shocks that have preceded these two, there’s an unmistakable feeling of quality and durability. The external adjusters have a solid feel, making each turn feel like a precision adjustment (clockwise is always increasing the adjustment whether for rebound or compression). There is no vague sensation when you are selecting the climb, trail or descend mode. You can tell instinctively which choice you have made.

The fork feels like it was designed for the Pivot Mach 5.7 Carbon. It easily matches the strength of the bike’s front triangle and head tube (one of the most laterally rigid we’ve ridden to date). The QR15 axle and solid feeling chassis allow you to point the front end anywhere you want and have it stick. Riders who ride flexy forks will have to relearn line choices. You no longer have to avoid ruts, rocks, roots and off-camber sections. Just point this fork and be amazed at what it can do for you.

Our shock, as with all Float shocks, was factory valved for a specific bike. That’s because a dw-Link rear suspension (like on the Pivot) is going to need different damping characteristics than a shock being mounted to a single-pivot design, Specialized FSR, Ellsworth ICT, Trek ABP or Niner CVA. Inother words, our evaluation is based on how the shock worked on the Pivot.

The shock was easy to set up (Pivot supplies a sag tool), and the unit worked flawlessly. The Boost Valve isn’t something you can feel (like flipping the CTD lever) in increments. It is a seamless feature that delivers a solid pedaling platform when hammering, but doesn’t ramp up when hitting square-edged bumps or G-outs.

We had a chance to ride this bike back to back with last year’s DU bushings versus this year’s updated bushings (we showed how to install them in October’s “Garage Files”). The new bushings have a greater impact on the shock’s performance than the Kashima coating did when introduced in 2011. They allow the suspension to move smoothly and with less stiction. That makes the shock easier to tune and allows the rear suspension to move more freely.

THE CTD DILEMMA
We saved the CTD for last because this feature is a mixed bag. First, it works as advertised. Even on a bike with an already firm pedaling platform like the Pivot, it is easy for a beginner to feel the difference between the CTD modes. This is not some subtle adjustment. It makes a major difference. If your bike has an active rear suspension design, you will feel the benefits even more than we did on the Pivot.
That is the CTD’s biggest strengthand its biggest weakness. Once you know what it is capable of, you want to use it all the time. The problem is, using CTD is a labor-intensive proposition. Every time you climb, pedal along a singletrack or go down a hill, you are taking your hands off the bar to throw levers. Using CTD requires a lot of rider participation for it to live up to its potential.

We found the fork’s CTD to be easier to adjust than the shock’s. The shock’s CTD lever is mounted tighter to the shock’s body than the ProPedal lever of old, and this causes the shock’s Schrader valve to get in the way of your hand when reaching for the CTD lever. Once you find it, it takes a fair amount of pressure to move the lever. We like the solid feel compared to the vague feel of last year’s ProPedal lever throw.

There are a few ways around this dilemma. One, you can simply use the Trail Tune feature (if your shock has this option) to dial in a compromise setting and ride your bike in the trail mode all the timeor until you hit a long downhill. Two, you could use Fox’s remote actuation lever that mounts on the handlebar, making switching the CTD possible without removing your hand from the bar. The drawback is this adds clutter and complexity to your bike (two extra cables), and Fox’s remote levers are bulky and a far cry from ergonomic. The remote is also not a feature that can be added to an existing fork or shock. It’s an integral part, not an upgrade. Three, you can go for Fox’s electric remote system that adds a battery and $1000 price tag for the privilege of using CTD. No thanks. We are still trying to wrap our heads around paying $2000 for wheels. To pay another $1000 after spending $1250 for a fork and shock seems extravagant.

The CTD feature doesn’t translate to every bike, and the Pivot Mach 5.7 is a good example. The climb mode for the Pivot Mach 5.7 is essentially a lockout that we would only use on pavement. Everyone agreed on this, but no two riders agreed on anything else. Some used the descend for climbing because they wanted the rear end to soak up rocks on steep stuff. Others felt descend made the bike too slack and never used it. The last camp used trail for everything. We imagine that the CTD will work better with Trek or Specialized’s rear suspension, but we can only speculate until we actually test it.

We are not enamored with the new CTD feature on these otherwise outstanding products. This type of suspension technology is moving in the wrong direction. It works as promised, but riding is more fun the less input your components require from you. We would rather have a set-it-and- forget-it technology than technology that demands constant attention.

Our opinion of CTD doesn’t knock the shock or fork down to a two-star rating because it performs exactly as Fox claims, but the CTD feature does hold the components back from getting a four- or five-star rating.

How can I avoid smacking my pedals on rocks?