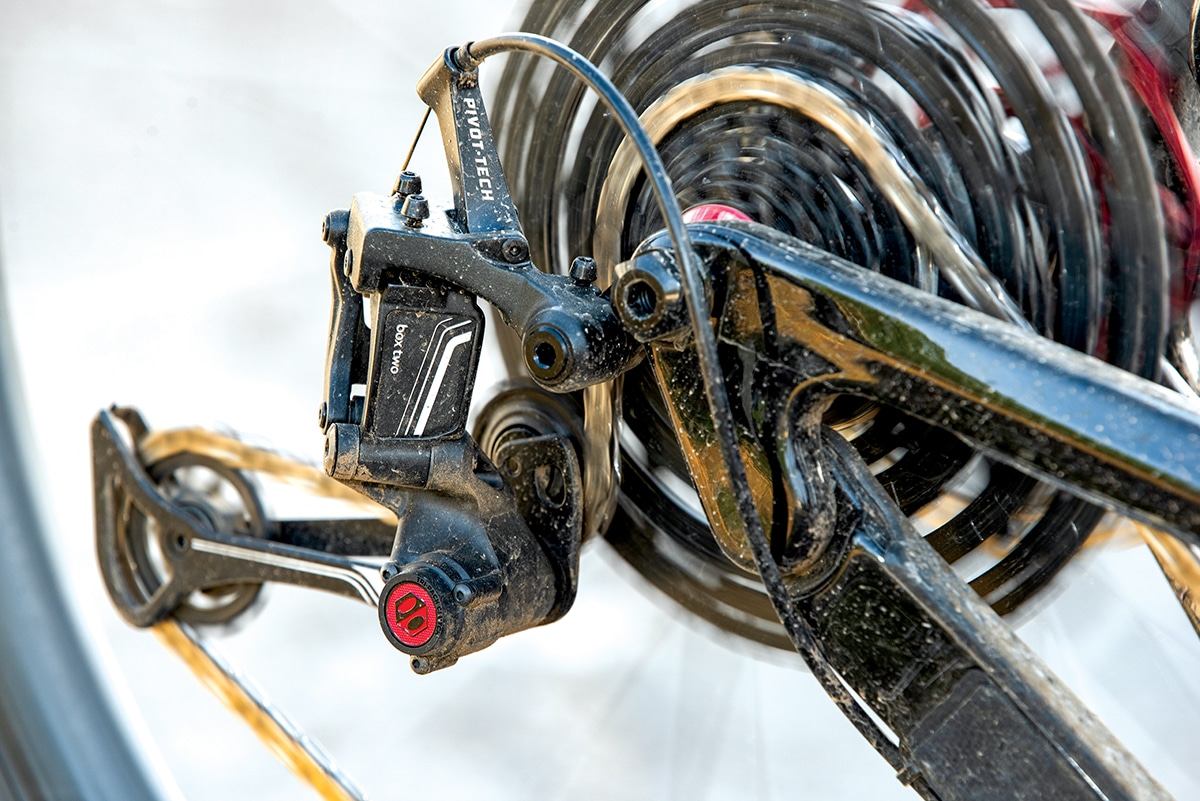 As many of you know, the “Big S” companies in the drivetrain world steal much of the attention from almost every bike manufacturer. While they are no doubt solid performers, there are other options for riders to consider. In the current cycling-boom climate, we are seeing a shift (no pun intended) towards more affordable options with gear ranges similar to the coveted 12-speed systems. Box Components might not be the first name on your list when looking for a new groupset, but Box Components has made some noteworthy innovations, making its products competitive with the bigger kids on the block. Is the Box Prime 9 right for you? To find out, we decided to remove the 12-speed drivetrain from our test bike and install Box’s 9-speed option for our test ride.

Tech features: “Wait, did you just say 9-speed?” Yes, we did! Nine-speed has deep roots in cycling that date back to the late ’90s, but to be fair, it was usually paired with a triple ring instead of the more popular 1x system of today. Prime 9 is unique in that it retains the durability of a 3×9-speed with the simplicity of modern 1x drivetrains.

“What about the range?” Just because 9 is less than 12 doesn’t mean you lose the range. The Box Prime 9 we tested has an 11-50t cassette that is paired with a Box chain, shifter and derailleur to complete the kit. SRAM’s latest 12-speed update now offers a 10-52t range, while Shimano’s 12-speed has an 11-51t range. While we don’t have any major beef with the performance of 12-speed systems, SRAM’s cassette does require an XD freehub body, and Shimano’s latest requires a Micro Spline body. With parts becoming difficult to find, it’s worth a mention that the Prime 9 cassettes use a more traditional HG freehub. Sure, the other competitors have more steps in between with less of a jump from gear to gear, but does that make a difference?

Before we go into more technical details about the Prime 9, let’s cover the price ranges and options. Box offers three different tiers of the Prime 9. The complete Box One Prime 9 groupset comes with a shifter, derailleur, chain and cassette, and is priced at $626. The Box Two that we tested is slightly heavier but also comes as a complete kit for half the price at $294. If a rider is on an even tighter budget, there is also the Box Three Prime 9 set for $209. Box even offers kits that are a mix of tier levels, since they share the same design. If a rider desires, he can even buy each component separately to make his own Prime 9 kit. For comparison, we’ve included Box’s handy chart.

With weight being the main difference among the levels, each option shares the same Prime 9 Technology. While we mentioned the freehub compatibility, it is also important to note which chains and chainrings can be used. Prime 9 chains are compatible with most 11/12-speed wide-narrow chainrings. Box recommends wide-narrow chainrings from brands like Wolf Tooth Components, Race Face, One Up Components and AbsoluteBlack. 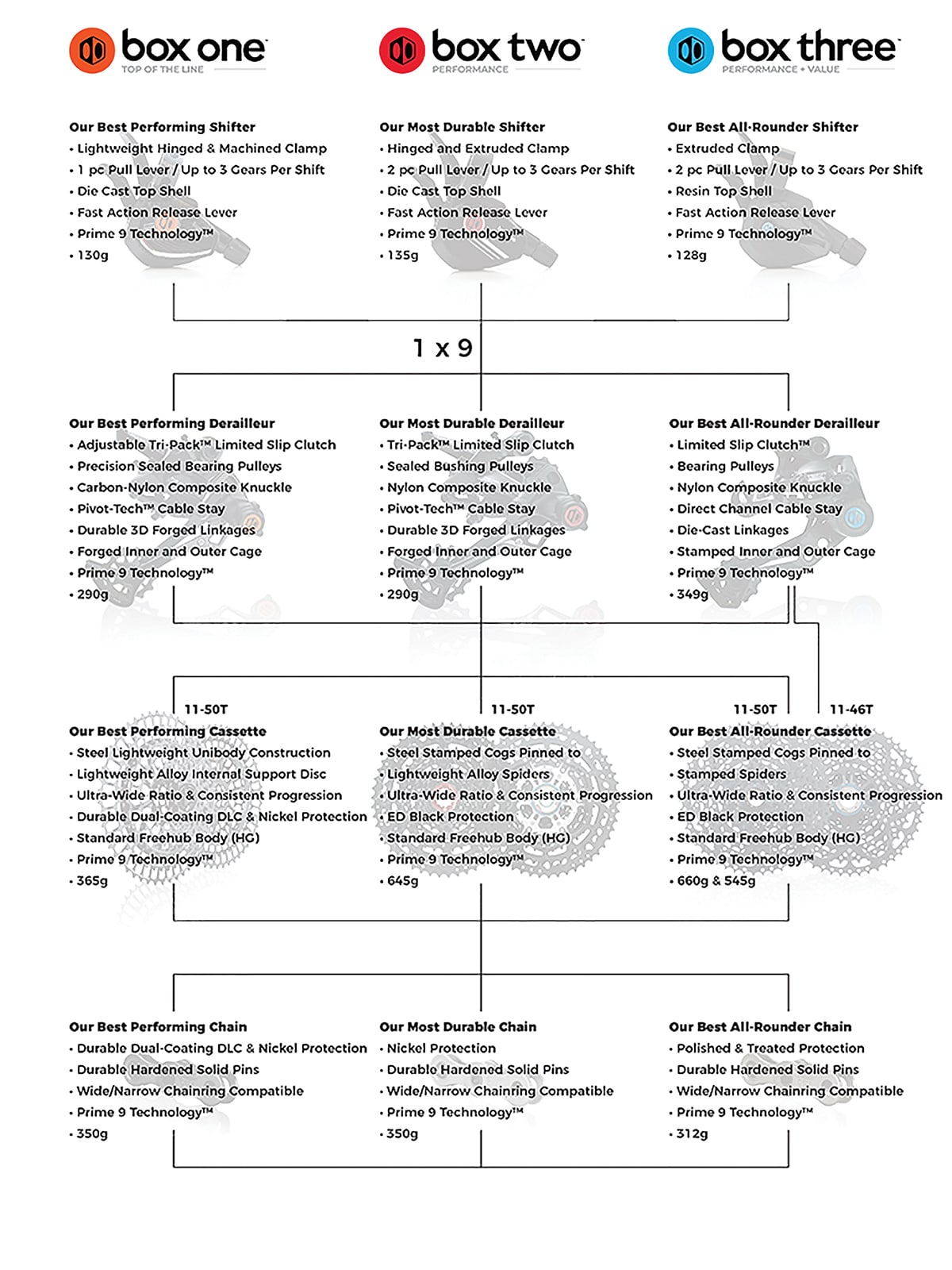 Field test results: As we installed the new Box Two Prime 9 groupset, we were immediately taken aback by the quality, especially considering the price point. While the more expensive drivetrain options available typically feature a refined design with higher-end materials, it is great to see the same technology being utilized. We especially like that the Prime 9 system uses an HG freehub design, since this will likely be for a rider looking to get more gear range without having to invest in a different rear wheel or freehub.

While we were unsure of how it would perform at first, after a few adjustments in the bike stand and trailside on our first ride, we were pleasantly surprised. We’d easily compare the shifter’s tactile feel to that of SRAM. The chain had no issues being ramped up/down when under pedal power and responded similarly to Shimano XT or SLX. It did take a few rides for the system to break in, but once we had some miles on the drivetrain, there was no denying that fewer gears meant fewer shifts. We also noticed that there was a significant reduction in the angle of the chain in the lowest gear in comparison to the 12-speed system previously on our test subject. At the end of the day, some riders might prefer to have more steps in between gears; however, as Box intended, fewer shifts equates to an increase in the life of the shifter and cassette. This is a great option for riders who want a competitive gear range at a value-driven price. It may not be the flashiest drivetrain, but it is ready to be put to work for any rider, no matter his or her budget.

• Great value in comparison to competition for a groupset

• Some riders may prefer less aggressive steps in between gears