Thirty years ago Bob Fox started tinkering with motorcycle suspension, building some of the best prototype forks and shocks the world had seen. Fast-forward to today, and the guy is still deeply involved in the process that gives you a suspension product on your mountain bike with more technology in it than the first spaceship had.

Fox’s trail and all-mountain offering is the newest generation of the 34 fork and Float shock. It is like a “little brother” to the 36 and Float X shocks that have been the predominant choice of Fox enduro athletes for the past year. While the fork and shock may not look much different from afar, the internals and details in the chassis and architecture tell a different story. 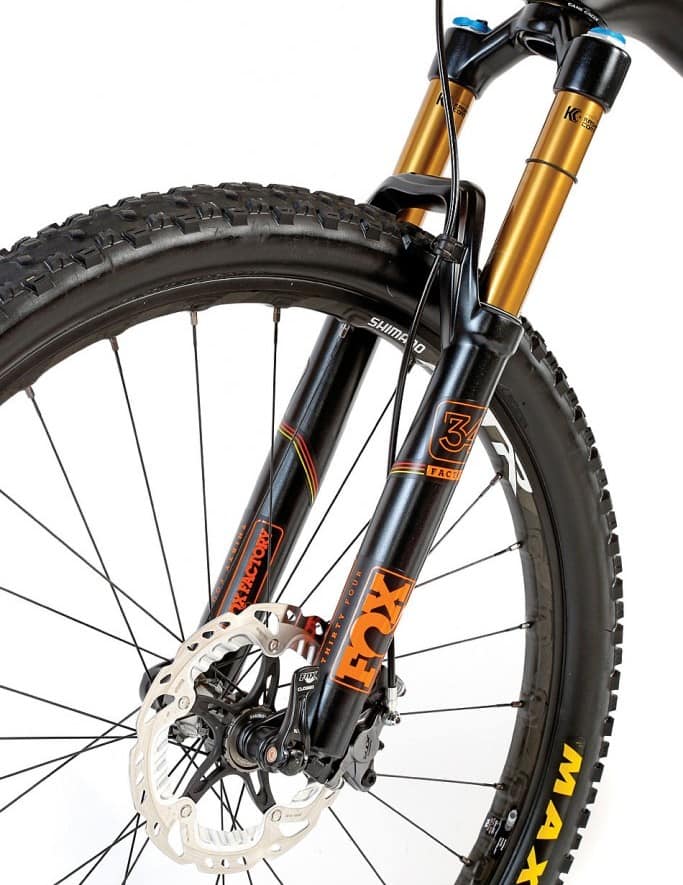 The new 34 fork and Float shock seek to drop weight while increasing performance with updated damper technology, updated castings and several small tweaks to complete the package. These updates are designed to give riders better options for dialing in their suspension for the trail. Most notably, Fox has moved away from the CTD (Climb, Trail, Descend) modes for their suspension settings and moved toward a configuration that allows riders to decide which setting works best, rather than letting the etching on the controls dictate which setting to be in.
The 34 fork comes with an all-new damper dubbed the Fit 4. The cartridge-style damper offers three on-the-fly compression adjustments to go from open to medium to firm settings with the flip of a switch. The compression adjustment also features a fine-tuning mode that allows the rider to dial in the ride quality of the “open” mode without affecting the other two settings. This is in contrast to CTD dampers, which had a similar setting that only affect- ed the Trail setting.

The 34 also features a totally redesigned air spring with a new air negative spring. Previous generations of 34 forks used a coil negative spring. The new system is claimed to be lighter and more precise for reducing breakaway force. Our test fork tipped the scales at 4 pounds (1820grams) with a cut steerer tube, which is more than 1/2 a pound lighter than the 4.6-pound (2100-gram) fork we replaced. It will retail for $875.

The new Float shock features Fox’s Dual Piston System (DPS) damper and Extra Volume (EVOL) air sleeve. Both technol- ogies are designed to take the Float, the shock most others are measured against, to the next level.

The DPS system uses two separate pistons to control different settings in the shock. The main piston controls the open and medium settings, and a dedicated lockout piston controls the firm setting. The shock is designed to have a wider range of adjustability with the on-the-fly lever and a more usable and firmer climbing platform.

When Fox reached out to us to test the new trailbike suspension platforms, we wanted to ensure we would have an apples-to-apples comparison to the products we’d ridden in the past. It’s no secret that the Mountain Bike Action testers were never fans of Fox’s CTD platforms, as evidenced by our two- and three-star reviews. We bolted the new fork and shock to our tried-and-true Yeti SB5c, a bike that was originally spec’d with a 34 CTD fork and Float CTD shock. This bike would provide the level playing field we were looking for to evaluate the claimed improvements of the new suspension.

Out of the box, the new suspension felt impressively light—some thought too light. Setup proved remarkably simple and nearly identical to previous generations of Fox products. Both the fork and shock use a single air valve to control both the positive and negative air springs. The only addi- tional step, because both use a self-ad- justing negative spring, is to cycle the fork and shock several times after adding or decreasing air pressure in the system. This allows the pressure to equalize and give an accurate pressure reading. Forgoing this step won’t necessarily kill the ride quality, but the rider won’t get an accurate gauge on settings.

Initially, both the fork and shock felt dialed but not impressively different from previous versions. We settled on a neutral setting with 30 percent sag front and rear and headed to the trails.

The new 34 fork sports a lower-profile chassis with a lower axle-to-crown mea- surement than the previous design, some- thing we noticed right away. The new fork sports the same 140 millimeters of travel but sits nearly a full centimeter lower. This brought the front end lower to the ground and steepened the head angle of our test bike slightly. Our particular bike worked well with this change, but riders looking to keep consistent geometry should keep this measurement in mind. The fork features adjustable travel up to 160 millimeters via swapping the air spring assembly, so we could have kept a fairly consistent mea- surement by upping the travel to 150.

On the trail, the new 34 has a remark- ably dialed feel very reminiscent of the 36 introduced last year. We won’t claim that one single factor delivers this smooth feel; it’s a combination of a number of design changes.

The air-sprung negative spring provides a perfectly equalized spring system that not only improves small-bump compliance but keeps the annoying spring rattle previous Fox forks were known for at bay. The new damper is very similar to the previous gen- eration of CTD forks but provides a larger and more usable range of adjustment. In fact, our testers noted that the fine-tune adjustment could nearly overlap the “medi- um” setting when turned all the way in. The firm setting also provides a pedaling platform as close to a true lockout as we’ve seen from Fox in many years.

The Float shock sports similar damper improvements that mirror the features of the 34 fork well. The shock provides a huge range of adjustment that will satisfy nearly any rider, from the set-it-and-forget- it type all the way to the techno junkie who loves to tinker. The new Float really sets itself apart from the previous generation with the EVOL air sleeve, which boasts

improved small-bump compliance and a more linear spring curve. Essentially, Fox designed this air sleeve to feel as much like a coil-sprung shock as possible. Our testers noted the biggest difference in high-speed chatter sections where the shock seemed to feel more planted to the ground, delivering improved traction through rough corners. This more planted
feeling isn’t a “glued to the ground” sensation; instead, it seems to make the available travel more usable and effective. Our Yeti test sled felt both more confident in the rough and more playful, probably due to the improved traction and control.

The new 34 and Float shock proves that while Fox may have had a rough few years with its CTD experiment, the engineer- ing-driven company is far from out of the race to deliver the best suspension prod- ucts. We applaud Fox’s efforts to return to its roots, listening to rider feedback
and providing performance first and slick marketing terms second. Our upgraded Yeti SB5c test sled was very impressive from the start, but it is improved now thanks to the new fork and shock. If this isn’t a five- star product, we don’t know what is.

Mountain Bike Action is a monthly magazine devoted to all things mountain biking (yes, that’s 12 times a year because we never take a month off of mountain biking). It has been around since 1986 and we’re still having fun. You can start a subscription by clicking here or calling (800) 767-0345. Available from the Apple Newsstand for reading on your iPad, iPhone or iPod Touch.