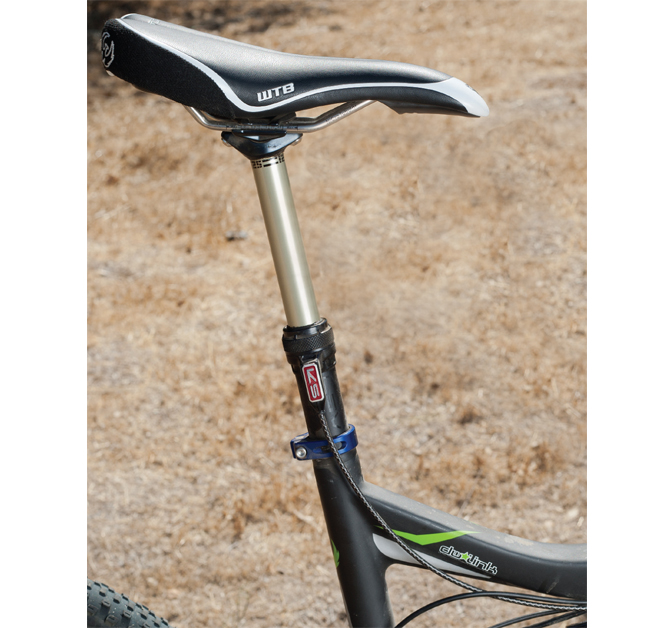 Riders who have adopted dropper seatposts, which can be lowered 3 to 6 inches and then returned to full extension with the push of a button or pull of a lever, develop a love-hate relationship with the devices over time. Riders love the advantages of lowering their center of gravity for downhills, but they hate the quirky performance and spotty reliability of this increasingly popular accessory. The $395 KS LEV seatpost takes the hate out of the love/hate relationship.

Tech features: The KS LEV seatpost is a hydraulically locked and air-sprung post that offers zero-offset and standard rail-saddle mounting. It has a patented one-way roller bearing to address play issues between the seatpost’s stanchion tube and body. Actuation comes from a carbon fiber remote lever/button that replaces an ODI Lock-On grip’s inner clamp, or it can be used as a stand-alone clamp. The LEV is available in 31.6-, 30.9- and 27.2-millimeter diameters in drop heights from 3.9 to 5.9 inches, depending on the post’s length. Our 30.9mm-diameter post with 4.9 inches of drop weighed 1 pound, 2 ounces with the cable and remote lever.

Field test results: The KS LEV was mounted to a Pivot Mach 5.7 Carbon, and we used ODI Lock-On grips so we could run the LEV’s actuation lever as one of the grip’s lock-on clamps. Everything mounted easily (including the WTB saddle), especially since the Pivot frame offers cable guides for a dropper post. Nice. 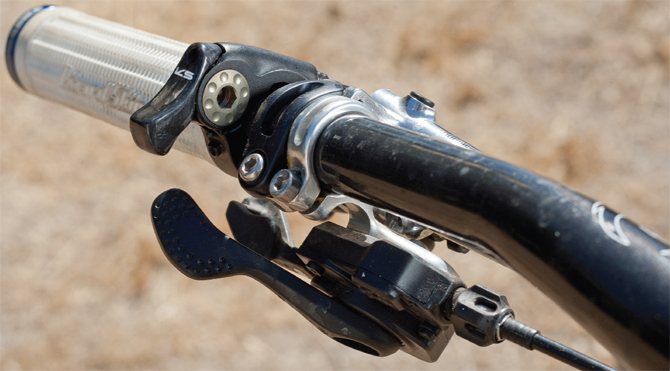 Many remote levers require that you twist your wrist or even remove your hand from the grip to use them. Not the LEVs. This remote actuation lever is tiny and ergonomically shaped and positioned so that actuating it with your thumb is close to a subconscious action. It is more natural and fluid than using triggers for shifting.

Once you push on the lever, the seatpost lowers with a smooth, stiction-free movement. Release the lever at any point between full extension and bottomed out, and that’s where the saddle height stays. There are no clicks or predetermined saddle heights. You pick exactly where you want the saddle to be. Again, the smooth operation is phenomenal.

Another big plus to the KS LEV is that there is no cable movement, as the saddle drops or rises, unlike posts where the cable is attached to the seatpost head. This is a big plus, because the cable does not bow out and contact the rider or worse, the rear tire.

When we tested the Pivot Mach 5.7 Carbon (MBA, June 2012), we said we couldn’t bring ourselves to run a dropper post on it because of the weight tax. Well, scratch that. After spending three trouble-free months on the LEV, we feel it deserves a spot on the 5.7 Carbonor on your bike, for that matter.

The almost $400 price tag makes the LEV the most expensive dropper post we have tested. Shouldn’t that knock a star off? No. This is what it costs to deliver a dropper post that works as promised. You can find cheaper posts, but none of them operate as smoothly and as trouble-free as the LEV. You get what you pay for.

This review originally appeared in the October 2012 issue of MBA. Subscribe here.

Photo of the Day: Brandon Semenuk at Whistler