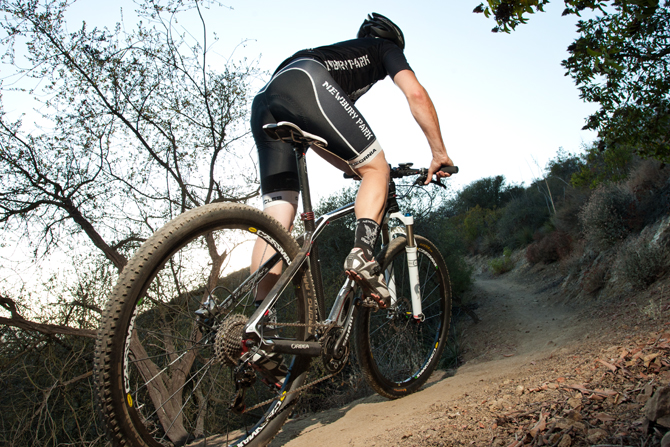 Racers are always looking for an edgethe lightest equipment, the shortest lines around the track, the perfect pre-race routine and, most important, the proper workouts. But, how do you gauge your progress? For many riders, it’s the results on race day. However, if you are a serious racer who doesn’t like to leave much unknown about his fitness, you may be missing out on a very helpful tool: the power meter.

SO WATT?
Terrible pun aside, if you have watched professional road racing on television, you have undoubtedly heard people talking about “watts.” Watts are a measurement of power. In cycling, the number of watts reveals how much force is being applied to the pedals. Calculated using torque and cadence, it is not just a measure of how hard a gear you can push. This explains why a rider spinning a lighter gear at a higher cadence can be traveling just as fast as a rider spinning a heavier gear at a lower cadence.

The overall performance of a rider is often measured in watts per kilogram, or his power-to-weight ratio. Heavier riders can generally push a higher wattage, but if their power-to-weight ratio is not very high, they will be watching lighter, more efficient riders ride off into the sunset on climbs.

A rider’s power-to-weight ratio measurement is calculated using their “lactate threshold” or “threshold power.” This is the amount of power a rider can sustain, working as hard as he can, for an hour. This is the best gauge of rider performance and is an invaluable training number to be aware of.

If you are a savvy racer, you most likely ride with a heart rate monitor; that is a big step in the right direction. Heart rate monitors give you a pretty good idea of the effort you are putting out, but your heart rate can be affected by out- side factors, such as the temperature or what you have eaten on a given day. 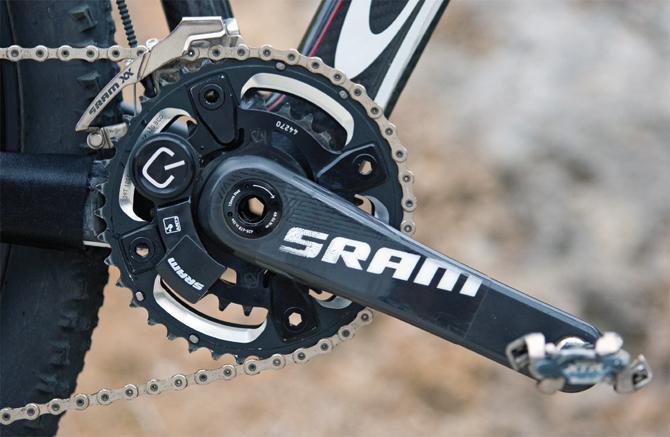 NOT JUST FOR ROADIES
The Quarq system is used by the Subaru-Trek and Giant Factory off-road teams and riders such as Nino Schurter, Julien Absalon and Jaroslav Kulhavy. When Quarq and SRAM teamed up to create the S2275 MTB power meter, we had to find out what the top-level racers were hiding up their sleeves.

There are a few different types of power-measuring tools. Some are built into the rear hub, and others, like the Quarq, are housed in the crankarm spider. Regardless of location, they all measure the two metrics required to calculate watts: torque and cadence. Torque is measured by a strain gauge housed inside the spider of the crank. Cadence is measured by another censor in the Quarq unit that reads every time it passes a magnet that you install around the bottom bracket of the frame. The power meter comes as a complete crankset and features SRAM carbon crankarms and the option of a standard 24-millimeter or BB30 oversized spindle.

NO FOOLING THIS THING
Our $1845 Quarq crankset lived on two of our race bikes throughout the season: first, on our Cannondale Scalpel 29er, and then on our Orbea Alma 29er. Installation was extremely straightforward; it was no harder than installing any other set of cranks. Once the crankset was installed with the cadence magnet puttied to the frame, we paired it with our Garmin 500 cycling computer and were good to go.

The first thing you need to figure out is your lactate threshold. While it is theoretically based on a 60-minute effort, you don’t actually need to do a full hour to get a number; a 20-minute effort is widely accepted by coaches and riders. An all-out effort up a steady climb will suffice. Just subtract 5 percent of the number to account for the drop you would see over the remaining 40 minutes.

One thing is for sure; the power meter does not lie. It will not coddle you and tell you that everything is okay. Some test riders’ delusions of grandeur were shattered when they looked at the numbers. A dose of reality can be a good thing, though.

While our initial thought was that we would be able to gauge our hardest efforts in real time with almost machine-like precision, this was not the case. What the Quarq actually did was help keep our efforts easier during recovery rides and act as a bit of a cheerleader during hard races or sustained climbs. Much of what the Quarq can do for your training comes after the race or training ride is over and you are analyzing the data.

Trek World Racing Gets the Royal Treatment for 2013