Twenty-five years ago, RockShox presented the world with the first production suspension fork, the RS-1. It was a game-changer. For $350 (roughly $672 in today’s dollars), riders of all disciplines could benefit from the advantages of the revolutionary 50mm of front-end travel. These forks are now found tacked to the walls of bike shops as if they were family heirlooms. It’s well known that inverted forks have the ability to perform better than their conventional counterparts. Motorcycles have been utilizing inverted forks for decades now, taking advantage of the increase in stiffness and smoothness of travel, but mountain bike applications have been stymied by limitations in stiffness and excess weight or cost. RockShox has made over 30 different fork models since its 1989 debut, and it is now using all those years of research and development to enter into the market of inverted fork design with its reincarnation of the RS-1. 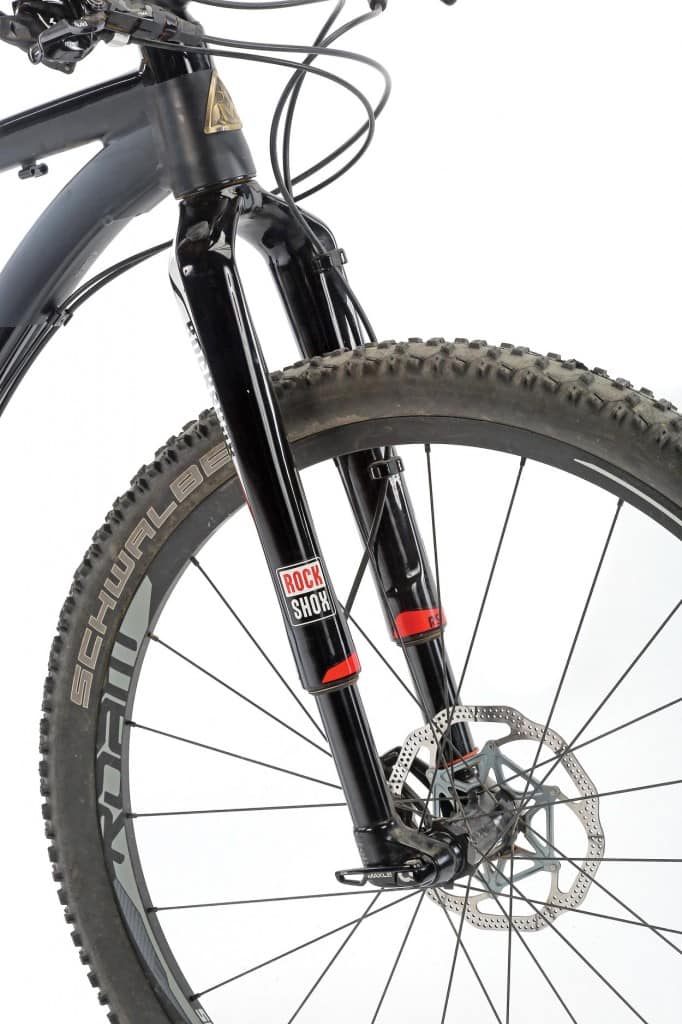 It’s easy to get caught up in the flashy appearance of the new RS-1 fork, but it’s the technology inside that makes the RS-1 unique. RockShox’s Predictive Steering hub, consisting of a 15-millimeter Maxle Ultimate thru-axle and additional 27-millimeter Torque Tub outer axle, brings together all the elements needed to create the lightweight inverted design. The Torque Tube essentially acts as a brace, increasing the contact area between the hub and stanchions and thereby reducing the amount the 32-millimeter stanchions can twist.

Able to find the end of the travel a little too quickly and looking for a more progressive feel? RockShox’s Bottomless Token air volume spacers are just the thing and are easily installed. To prevent diving under braking, a Dig valve is used in the compression side of the fork, and to prevent the fork from packing up under repeated high-speed compressions, the two-stage Rapid Recovery valve in the rebound circuit returns the travel before the next rock is hit. The RS-1 uses a brand-new Accelerator damper that is different from the expanding bladder found in other systems, such as RockShox’s Charger damper. The Accelerator damper increases the ability of the fork to fully lock out during sprints. 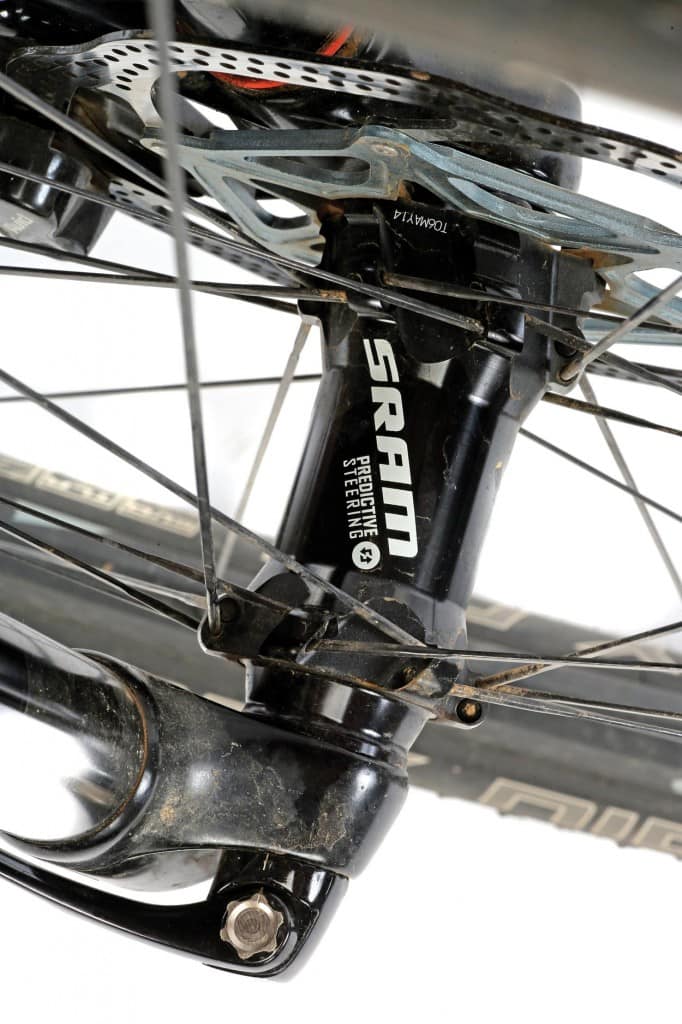 With so much innovation going into the Predictive Steering system and internals of the fork, the chassis needed an elegant design as well. The RS-1’s legs, crown and steer tube are all constructed out of a single carbon mainframe, which enabled RockShox to make the fork stiffer and still keep the weight down. Depending on the frame you choose to install it on and your style of riding, the RS-1 comes in 80-, 100- and 120-millimeter travel options, all with 32-millimeter stanchions. It’s only available in a 29-inch offering at the moment, and RockShox has no plans to produce it for another wheel size. All the research and development that went into this fork have to be paid for somehow, so the RS-1 has a suggested retail price of $1865. 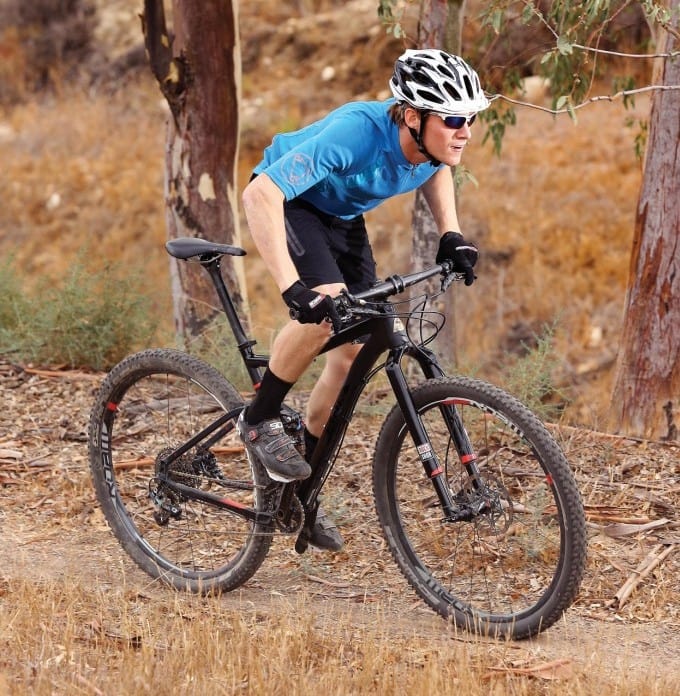 We were very excited to ride with the all-new RS-1. We expected a snappy and stiff fork, but when we hopped on the bike, our initial impression was that the fork was under sprung and under dampened. It felt incredibly soft as we began rolling through the start of our favorite cross-country loop; however, as the dampening began to set in, we realized that the inverted stanchion tubes of the RS-1 simply exceeded our expectations. The suspension was much smoother than anything we had ridden before–so smooth that we were unable to detect the moment when the stiction force released us into the travel. In other words, the constant lubrication of the seals in the inverted design was clearly noticeable in the breakaway feel of the travel.

Testing the 100-millimeter option, the RS-1 performed slightly under par at slower speeds. While we were powering through slow, rocky sections, the fork felt extremely rigid with little give to absorb the sharp rock faces. At higher speeds, blitzing the same sections, the fork floated over the rocks with ample control. Even though certain sections left us feeling a little out of control, the fork maintained its composure with minimal steering corrections. Through choppy corners, the RS-1 really hit its stride. We’ve never ridden another cross-country fork that supplied a similar feel of control and accuracy while tracking. Though the remote seems a little counterintuitive (pushing it in opens the damper), the XLoc control enables the bike to hold strong, even while under a hard sprint or up a vigorous climb.

This is one stiff rig. Made for a hardcore cross-country racer or dedicated trail rider, it exhibits very little fore/aft flex. The full carbon chassis, inverted stanchion tubes, and 27-millimeter Torque Tube combine to create the stiffest fork we’ve ever ridden, even under substantial stress and on vigorous climbs. These are the exact characteristics cross-country racers want from a fork, making it ideal for race day. We have no doubt the RS-1 will be placing racers atop World Cup podiums. That being said, those of you who take your trail riding a little less seriously may find yourselves more comfortable on a more conventional fork. At over $1,800, this isn’t the fork you want on your daily driver, and that’s really our gripe with it. We hope the price drops to a level that’s affordable for the average rider, but until then, it’ll only be found on the bikes of the racing elite.

Photo of the Day: Inside Line at Mammoth Mountain