X-Fusion has a 20-year history of building suspension components, 10 of which have been spent building bike- specific parts for some of the biggest frame manufacturers in the sport. Their design philosophy is simple: build suspension systems that deliver higher levels of performance by making them entirely out of metal. Take a look inside their dampers and you’ll notice plenty of CNC handiwork. We had to see whether such a simple philosophy could produce a better product, because when it comes to suspension, what it’s made of is only a small part of the equation. 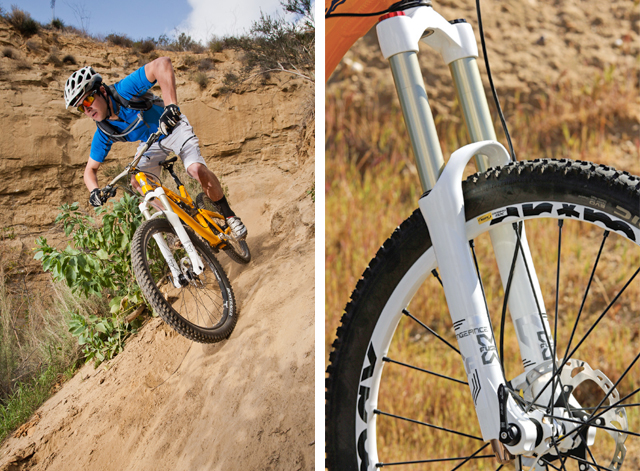 Tech features:
The Vengeance HLR DLA fork is a top-of-the-line, travel- adjustable, air-sprung offering from X- Fusion. It features 6.7 inches of travel that can be reduced on the fly to 5.5 with a flip of the Down Low Adjustment (DLA) switch. The all- new air-spring system is designed to deliver a linear feel, allowing the rider to use every bit of the travel without harsh bottoming. The damping is handled by a cartridge system dubbed the HLR, which features independent high- and low-speed compression and rebound adjustments. The chassis is built with 36-millimeter stanchion tubes and a tool-free, 20-millimeter Syntace axle to keep things stiff and lightweight. Our fork with the steerer tube cut to 7 inches weighed 5.5 pounds. The Vengeance HLR DLA retails for $885. X-Fusion can be contacted at (831) 221-5047 or by clicking here. 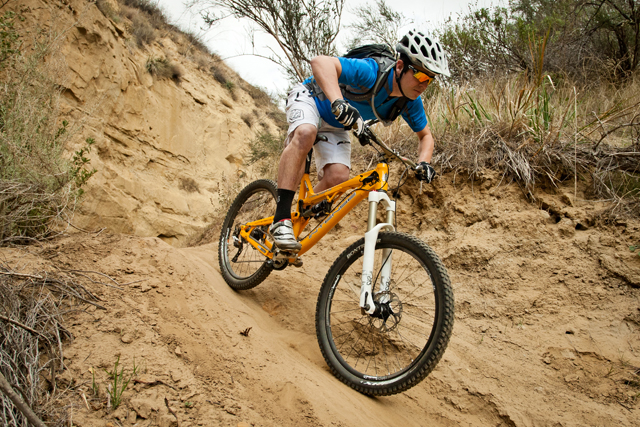 Field test results: We set the fork up on our Intense Tracer 2 test bike. We initially set it up to 30 percent sag and set the compression and rebound dampers a few clicks in on their adjustment ranges. This setup produced a balanced feel on the bike but raised the front end of the Tracer, which previously had been set up with a 5.9-inch- travel fork. While the Vengeance fork is light enough to be a trailbike fork, it’s clear that it’s designed for an aggressive bike that can handle its tall axle-to-crown height. The Tracer 2 we used it on was pushed to its limit as far as the travel goes. The high-volume and low-pressure system in the Vengeance is the first attribute the rider notices when com- pressing the fork. It delivers butter- smooth travel right out of the box, which allows for excellent small-bump compliance on trail chatter. After a few mid-sized impacts and square-edged hits, though, the fork tended to blow through its travel too easily. Without the assistance of a properly setup damping system, this fork would be doomed to hammock in the middle of its stroke. Fortunately, the Vengeance comes packing a serious compression- damper circuit. For the advanced suspension tuner, the Vengeance can be set up to suit any riding style. Our initial compression damping adjustment was far too weak, so we increased it to near the middle of the adjustment range for both high- and low-speed cir- cuits. Once there, the Vengeance delivered a near-perfect feel, where the fork lives near the top of its travel, absorbs even the smallest bumps, and dives through the full amount of travel on big impacts. With a well-tuned rebound circuit, the fork also returns quickly to the sag point and feels ready for action on the next impact.

Some riders will prefer to increase the compression damping further to resist pedal bob, but we found that our middle-of-the-range adjustments worked well. We only deviated two to three clicks on both high- and low- speed compression for the remainder of the test. One thing is certain; the compression dampers are so strong and deliver such a range of adjustability, a novice suspension tuner could destroy the ride quality quickly. Each knob has 24 clicks, and every additional click delivers a noticeable change in the suspension performance. Most riders will only need the eight to 10 clicks in the middle.

The DLA travel adjustment works flawlessly, allowing the rider to reduce the travel for climbing efforts, but we rarely found ourselves using it. We can’t find fault with X-Fusion for building in the option, though, as some riders may find it useful, especially if the fork is on the edge of being too tall for their bike.

With such an exceptional feel out of the box, great adjustability and seemingly flawless construction, we recommend the Vengeance for anyone looking for an upgrade to their aggressive trail bike?as long as the bike is built to handle this much travel.

This article was reprinted from our June 2012 issue. Subscribe to MBA by clicking here.