Racing For Fun And Raising Funds

Arcata, California is the home of the Arcata Community Forest (ACF), a shining example of what a municipal trail system can be. Set on the coast of Humboldt County, the ACF’s maintenance and administration is partially funded through sustainable harvest of the native redwoods that fill its 2,200+ acres.

While the ACF has always been a great destination for hikers and equestrians, for much of its history it had just a few short stretches of singletrack trail, offering limited appeal to mountain bikers. That all has changed in recent years due to the hard effort of local riders who lobbied city officials, volunteered for trail days, rolled up their sleeves and put in the work to build several new stretches of trail and rework some existing trails. 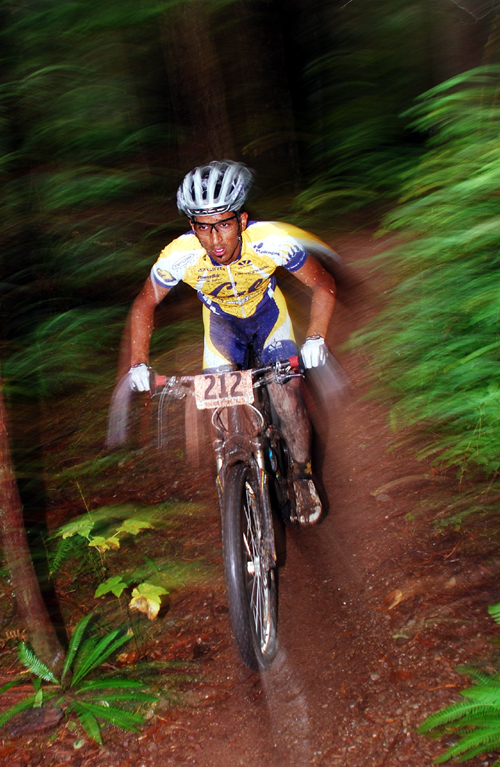 The collegiate ‘A’ riders were by far the fastest riders on the course, with UC Berkeley’s Natish Nag being the speediest. By the end he’d pulled nearly a four minute lead on second place.

Recently, Mark Andre, the city’s director of environmental services and steward of the ACF, proposed the purchase of an additional 160 acres which would tie in the ACF to the North side of town, creating new access points and lengthening the trail system by over four miles. Among those local riders is the Kirk Cohune, who sits on the city’s open space committee.

‘We had been strategizing on how to finalize the purchase of new easements and remaining parcels that would connect the areas of Arcata through the Community Forest,” says Kirk. “We needed assistance from state and federal agencies who when they provide funds, want to see local support for these projects. We formed the Arcata Forest Fund committee, made up of myself, the mayor of Arcata, Mark (Andre), county supervisor Mark Lovelace, and other local officials, and we decided to do a few fund raisers.’

And thus was born the Race For The Ridge Trail, ‘A race was already being planned,’ Kirk explained, ‘So when Justin Graves (captain of the Humboldt State University Cycling Team) wanted to do a collegiate event it just made sense to pool our efforts.’

Working with local shops, the HSU cycling team, the Bigfoot Bicycle Club (the local IMBA affiliated club), Cohune organized a two-day event that included a running race and collegiate and citizen mountain bike races including cross-country, short-track and a super D. Cohune estimates that between sponsorships and entry fees, that $10,000 to $12,000 was generated; very encouraging considering that it had rained for several days prior.  But most of the trails and access roads that made up the courses are well armored and all are well designed to shed water, so while conditions were wet, they weren’t muddy.

‘The city is doing a great job with this. It’s been a lot of fun,’ Cohune said and mentioned the festival will likely be held earlier next year to avoid the rainy season.

Humboldt State University teamster Justin Graves (featured on the cover of our March 2010 issue) has been on fire! Two weeks ago he was crowned Collegiate National Downhill Champion, last week at the Lagrange Fall Classic he took second in the pro/semi-pro downhill to clinch the Northern California Mountain bike Championship title, and this week he rode a very strong race to take second in collegiate A cross-country.

Sarah Shakal’s rode to 2nd place in the citizens expert race, but her smile was hands down the number one of the day.

UC Berkeley had a productive day, with Kathanne Hall taking first in women’s collegiate ‘B’, finishing nearly six minutes ahead of second place.

Along with the collegiate races there were also citizen categories. Erin White was fastest in the beginner women, completing one lap of the course in just a few ticks shy of an hour.

Allyssum Cohen simply dominated the collegiate ‘A’ category. He nearest challenger was sixteen and a half minutes behind her! Cohen’s winning pace would have been 5th in the mens collegiate ‘B’ race.

Included in the festivities was a costume contest. Brendan Lehman of UC Santa Cruz opted out of wearing his usual team kit, and took 3rd in the collegiate ‘A’ category.

Then there’s Stephen Jayanathan who despite not having a costume managed to be possibly the scariest thing on the course.

The Arcata Community Forest is already a shining example of a municipal multi-user trail system. The addition of the Ridge Trail will make it even better.

What’s The Best Bike For My Pump Track?

What On Earth Is This?

Aaron sees where he’s heading and starts to react

Can he save it (and miss the spectators and photographers)?