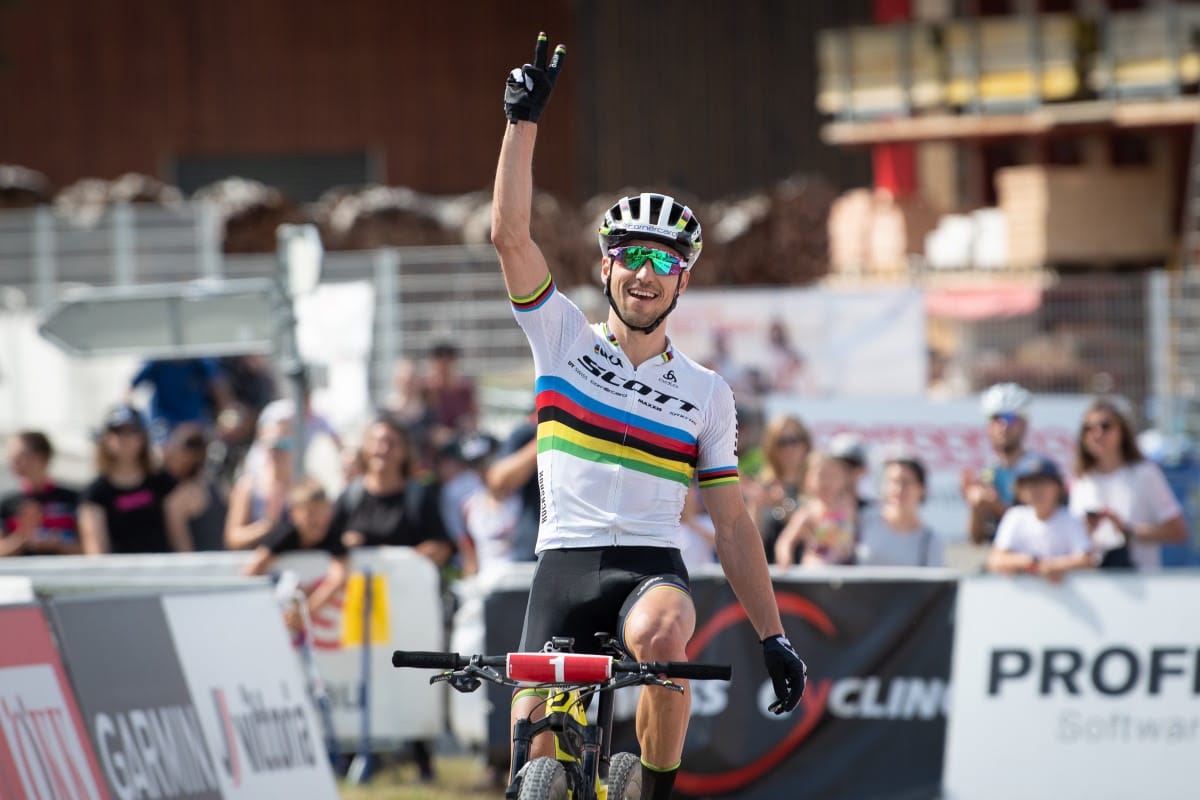 (Nino Schurter/SCOTT-SRAM, photo by EGO Promotions)
The Swiss Cup in Leukerbad, Switzerland was held before a limited audience, due to health concerns over COVID-19, but it was still an impressive race. Nino Schurter won the Elite Men’s event, which was no surprise, since he’s the reigning (and eight-time) Elite Men’s XC World Champion, but the competition was tough. Longtime challenger Mathias Flueckiger finished less than 20 seconds behind him. Meanwhile, Nino’s Scott-SRAM teammate Lars Forster (who won the World Cup finale last year in Snowshoe, West Virginia) placed fifth.
In the Elite Women’s race, Sina Frei scored the win. Frei, who won the U-23 World Championship last year, has stepped up to be a serious contender in the Elite Women’s field this year, as she has now turned 23. Frei beat the second-place finisher, former World Champion Jolanda Neff, by over half a minute. The reigning Elite Women’s World Champion, Pauline Ferrand-Prevot, took fifth.
Frei, who turned 23 on July 18th, looks to be one of the smallest pro women racers in history. She is said to be only 4’11” and 103 pounds. Despite her size, she is clearly looking like one of the strongest women mountain bikers in the world right now. In doing a Google search for the heights and weights of the other top women XC riders, we found the following: Pauline Ferrand-Prevot is said to be 5’5″ and 117 pounds, Jolanda Neff is reportedy 5’6″ and 117 pounds, Kate Courtney is said to be 5’4″ and 128 pounds, and Emily Batty is reportedly 5’3″ and 106 pounds. Among the men, Nino Schurter is said to be 5’8″ and 150 pounds. Most of his competitors are bigger than him, but that definitely hasn’t hurt his career, so Frei’s size may not be a problem for her either.
Swiss Cup Elite Men Results:
1. Nino Schurter… 1:32:32
2. Mathias Flueckiger…1:32:50
3. Jordan Sarrou…1:33:42
4. Martins Blums…1:33:47
5. Lars Forster…1:34:32
Swiss Cup Elite Women Results:
1. Sina Frei. . .1:39:28
2. Jolanda Neff. . . 1:40:02
3. Loana Lecomte. .. 1:40:35
4. Alessandra Keller…1:41:25
5. Pauline Ferrand-Prevot… 1:41:37
THE SWISS NATIONAL CHAMPIONSHIPS
If any further evidence is needed that Nino Schurter is still looking like the top XC mountain biker on the planet, Nino won the Swiss National Championships in Granenichen, Switzerland this past weekend, one week after winning the Swiss Cup. The racing was even tighter this time, though, with Nino winning by only 5.6 seconds over Mathias Flueckiger. Third-place finisher Lars Forster (Nino’s teammate at Scott-SRAM and at the Cape Epic) was only 10-1/2 seconds behind Nino. 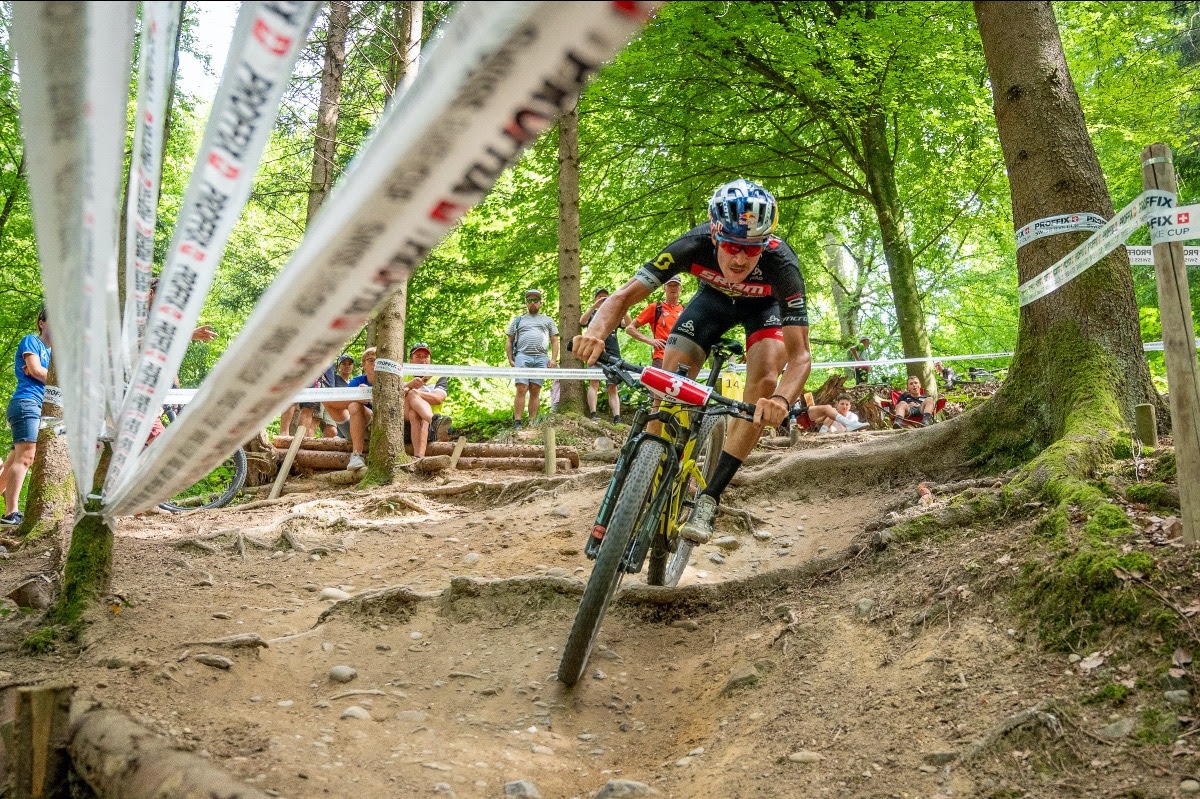 Lars Forster. (Photo by EGO Promotions, courtesy of SCOTT-SRAM)
In the women’s ranks, Trek’s Jolanda Neff took the top spot, with Sina Frei taking second, with a gap of 2 minutes 29.9 seconds. The good news is that it looks like Neff has fully recovered from the injuries she suffered late last year. In late December she reportedly crashed into “a pile of tree trunks with spiky branches” while riding in the Pisgah Forest in North Carolina, and she reportedly ruptured her spleen, broke five ribs, and partially collapsed a lung. Judging from how she was riding the past two weeks, it looks like she’s made a full recovery.
CAN NINO SCHURTER STILL DOMINATE THE SPORT?
Last year proved to be one of Nino Schurter’s toughest race seasons in the last decade, as he won only two of his six World Cup XCO races (Mathieu van der Poel of the Netherlands won three). Nevertheless, Nino still secured the World Cup series title and the  UCI World Championship, but he didn’t look as unbeatable as he did a few years ago. Two years ago, in 2018, Nino won four of the six World Cup races, plus the series title and the World Championship. Three years ago, in 2017, Nino won all six of the World Cup races, the series title, and the Worlds, racking up a perfect season. Four years ago, in 2016, Nino won the World Championship and the Olympic gold medal. Whenever World Cup racing resumes, Nino looks like he’ll still be one of the top contenders, but there are no guarantees beyond that. It looks likely that he’ll go down in history as the greatest mountain bike racer of all time, but the past two years showed some cracks in the armor, so we’ll have to see what happens when the whole world gets back to racing.
The Swiss National Championships
Elite Men’s Results:
1. Nino Schurter… 1:24:28.9
2. Mathias Flueckiger… 1:24:34.5
3. Lars Forster… 1:24:39.4
4. Lukas Flueckiger… 1:25:19.5
5. Filippo Colombo… 1:25:51.3
Elite Women
1. Jolanda Neff… 1:23:22.6
2. Sina Frei… 1:25:52.5
3. Linda Indergand…1:25:57.7
4. Alessandra Keller… 1:28:02.7
5. Andrea Waldis… 1:29:58.5
Share FacebookTwitterEmailReddItLinkedin