MASTERING 5 DISTRICTS TO CONQUER THE CITY – 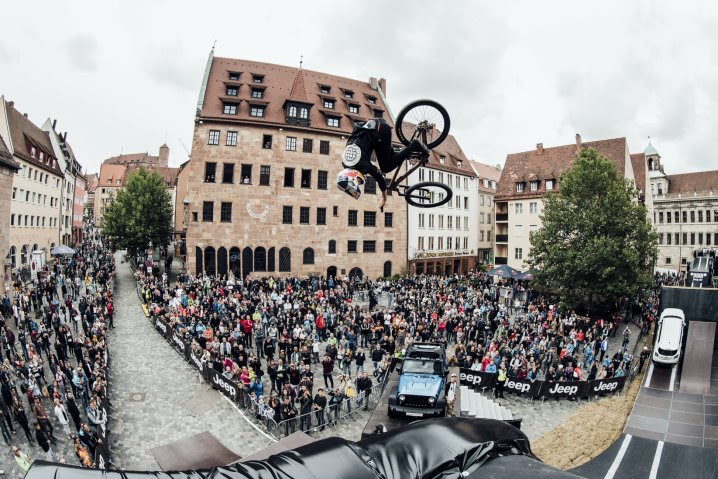 Nuremberg, Germany, 18 August 2022 – For more than 17 years Red Bull District Ride has distinguished itself from other Diamond FMB slopestyle events. District Ride’s unique and distinctive districts give riders a chance to showcase their ability on all different types of riding.

This year will be no different. The five distinct sections or “districts” will demand riders to be very well-rounded. This isn’t just a slopestyle course, this is an overall mountain bike mountain contest with elements of skate park riding, jumps, drops, and technical features. The sixth edition of the course has grown and evolved with the progression of slopestyle mountain biking. Riders and fans can look forward to seeing many new obstacles while still enjoying the classic features that they have grown to know and love from District Ride, such as the “Kaiserburg” castle drop and the grand finale Big Air Jump taking riders right into the middle of the city and into hordes of screaming fans! The Red Bull District Ride takes place on 3 September. Already one day earlier riders will demonstrate their skills at the Best Trick Contest.

When you want to build a unique course, you need the best designer, and who is better than one of the most creative mountain bikers of all time and winner of the first-ever District Ride, Aaron Chase. Chase knows the importance of creating a course that allows riders to do their best while also giving fans something that they will be returning for year after year. “The 2005 Red Bull District Ride was all over the place, the castle drop was huge and then there was a skatepark section, too. This meant you actually would have needed two different bikes to conquer the course properly. For the 2022 Red Bull District Ride we take into consideration what bikes will be ridden and what tricks will be thrown down, but we designed the course with the riders and the live show in mind. There will be a flow to the contest that will feel seamless and exciting. The riders will feed off this energy and combined with the sweet prize purse we will all be in for the show of a lifetime.”

But creativity isn’t just necessary when building the course, as Chase knows: “As a rider I would always concentrate on doing a few things that were different and memorable. There are so many guys throwing down insane moves, and it can all fall through the cracks if everyone does similar runs. Be yourself and stand out!

Here’s what riders and spectators can expect at the Red Bull District Ride in Nuremberg this year:

1. Castle District
The very first section of the course begins with something new: the riders start with their backs to the city in a quarter pipe, where they collect their first points. After the quarter pipe they head towards the wall of Kaiserburg. Here they will encounter the 6-meter-high Castle Drop. Which will require not only courage but precision because it’s not just about the next trick but also about the right amount of momentum to perfectly approach the feature.

2. Box District
The second district begins with the Domino’s Pizza step-down jump, ready for the crème de la crème of the international slopestyle elite, which then leads down the stairs in the narrow Untere Schmiedgasse, before the Bosch step-up cannon box waits at the Albrecht-Dürer monument. This feature can either be used as a feature for tricks or completely jumped over with the respective speed, like Tomas Lemoine most recently did at Crankworx Whistler. The Box District is one of the opportunities where the riders can let their creativity run free.

3.Quarter District
Arriving at Sebalder Platz, the completely new Specialized double quarter pipe feature lies in the shadow of the Sebaldus Church. Riders start left into the first quarter pipe, then right into the second and finally left again into a hip feature. After three trickable features, the course leads the riders towards Rathausplatz, where the last obstacle in District 3 comes with the Step-Up Mini Pad onto the ABUS Bridge.

4. Dirt District
This year, in the penultimate section of the track, the athletes can showcase their tricks. While dropping into three successive, ever-growing dirt jumps – the largest measuring a proud 3.8 meters high – after the final jump, another quarter pipe will lead the riders towards an elevator which will take riders to the finale of this course.

5. Big Air District
After a short elevator ride, the riders will not have time to catch their breath as they reach the top floor of the town hall, with tens of thousands of fans waiting below. From here, they will collect speed off the roof from a 15-meter roll in off of a 2-meter tall log jump which will set them up for the final feature, an almost 4-meter-high kicker that will boost them into the sky high above Nuremberg’s Hauptmarkt, where they will have their last opportunity to spark ecstasy among judges and fans alike.

Judging will underline how important each district is as the performances of the first four districts are included in equal parts. At the same time, points are also awarded for the so-called Flow Impression – i.e., how smoothly the run flows from the Kaiserburg to the elevator door. As the final highlight of each run, the big air jump in the last district is rated more heavily and accounts for 20 percent of the overall performance.

When awarding points, the seven judges are guided by the following criteria: amplitude, degree of difficulty, variety, execution, and progression. The score will be added later.

Anyone who cannot make it to the event in Nuremberg can of course follow the Red Bull District Ride live on Red Bull TV (www.redbulldistrictride.com).

The Red Bull District Ride follows a course from the Kaiserburg to the Hauptmarkt, where the grand finale takes place with the Big Air Jump in the heart of Nuremberg. The course leads right through the old town and is divided into five different districts, which each requires different skills from the riders. The Red Bull District Ride doesn’t feel like a pure slopestyle or freeride contest as it also includes a few elements of skate park riding, but with big jumps, drops and step-downs. A highlight in every athlete’s calendar, the Red Bull District Ride is always the scene of thrilling action and various tricks that have never been seen before, so-called “world’s firsts” on the mountain bike.

RACING IN THE CZECH REPUBLIC