moment after moment, they’re all there for the taking. Return to Earth is a feature mountain bike film about the simple act of living in those moments. A cinematic journey connected by true-to-life examples set by riders of all ages around the world, the film will show that when we lose track of time, we make the most of it.” 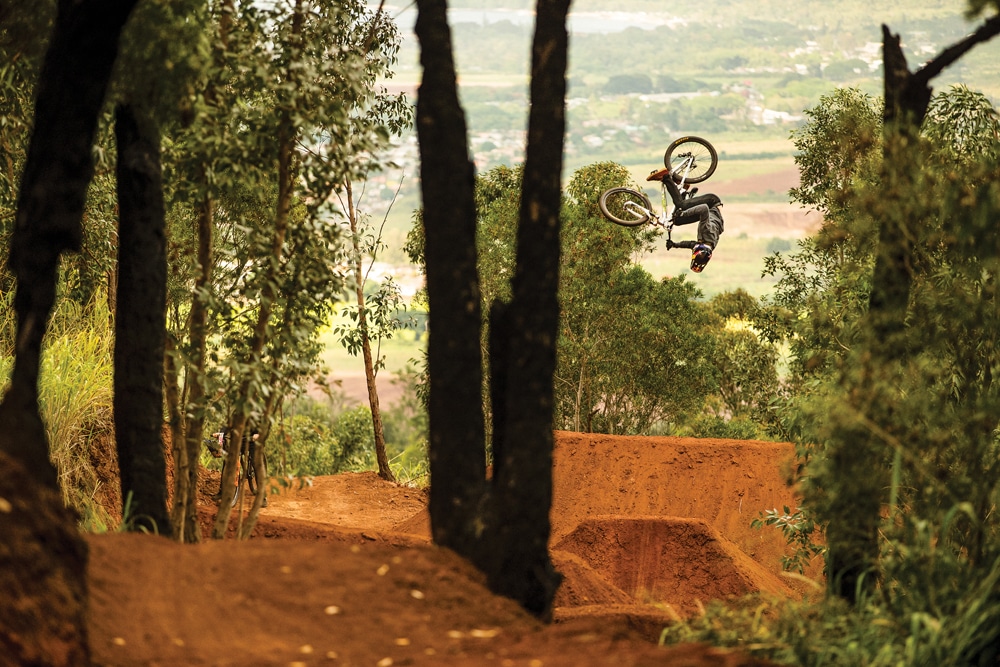 Brandon Semenuk gets inverted in the hills above Haleiwa. It took the Anthill crew three weeks to get the Hawaiian trails ready for filming.

The crew at Anthill has made a habit of tackling some very ambitious concepts for its recent films. From filming with a grizzly bear to making dirt fall from the sky, nothing seems to be out of reach, and each segment comes with a unique set of challenges. For Return to Earth, we filmed a segment where the goal was simply to document the fall colors in Quebec at their most vibrant. This may sound simple, but the window to shoot such a segment is short. When the leaves start to change color, the temperature tends to drop quickly. 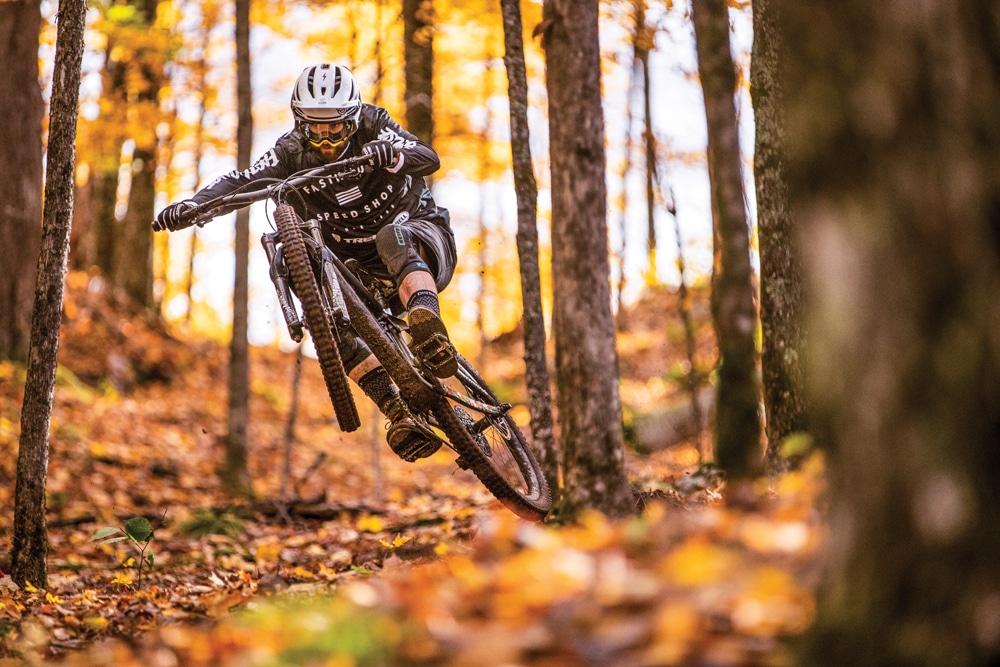 R-Dog putting down the power in the fallen leaves of eastern Canada.

Wind- and rainstorms would often roll into town at night, removing many leaves from the trees and threatening our timeline. Riding on trails partially covered in leaves also proved to be challenging, and from time to time we’d get caught up on something we couldn’t see underneath. Eventually, we settled into a steady workflow, and riding with Ryan Howard kept the vibe high. We found ways to creatively incorporate the leaves into the segment, roosting through leaf piles like a couple of kids. We ended up wrapping just before most of the trees were bare, and I think we achieved the look and feel from the segment that we were after. 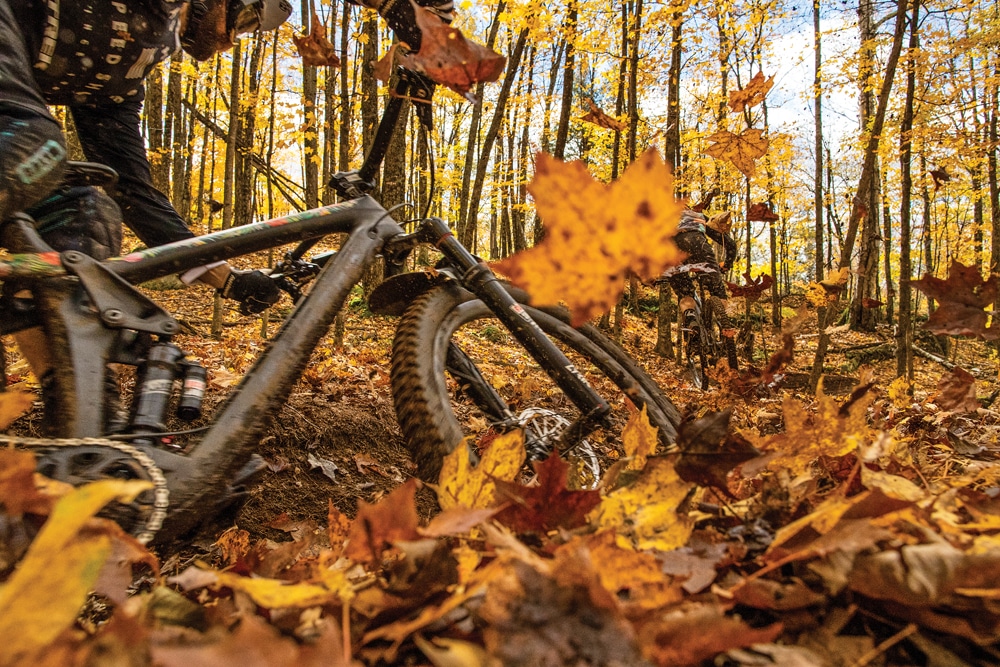 When I first started talking to Anthill about the leaf segment, I was a little skeptical, never having been to the East Coast in the fall. But when I got there early to dig with Adam Billinghurst, I was blown away by the colors and how fast it was all changing. We did what we could with the trails because it was a lot of rock, trying to make it fast and flowy for Vanderham and me. 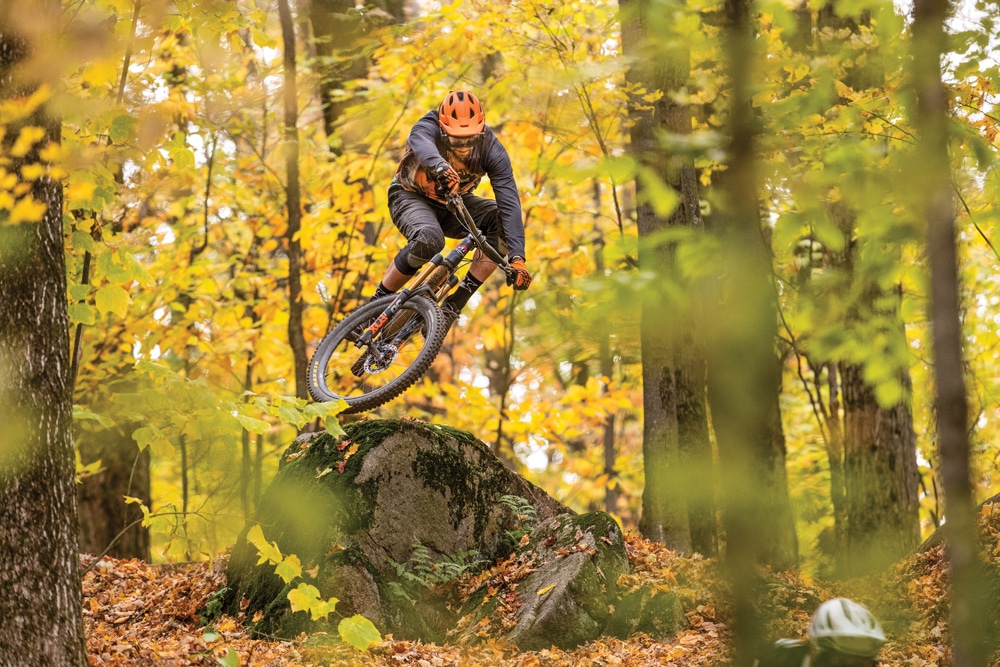 Thomas Vanderham lays down some style as he sails off a Bromont boulder.

We had to make something that would translate to looking fun to ride to make a good segment. Also, having a wizard-like Thomas to ride with was a huge help. He might be my biggest idol, and getting to film a video part with him was a career goal of mine! There was a lot of behind-the-scenes work with…