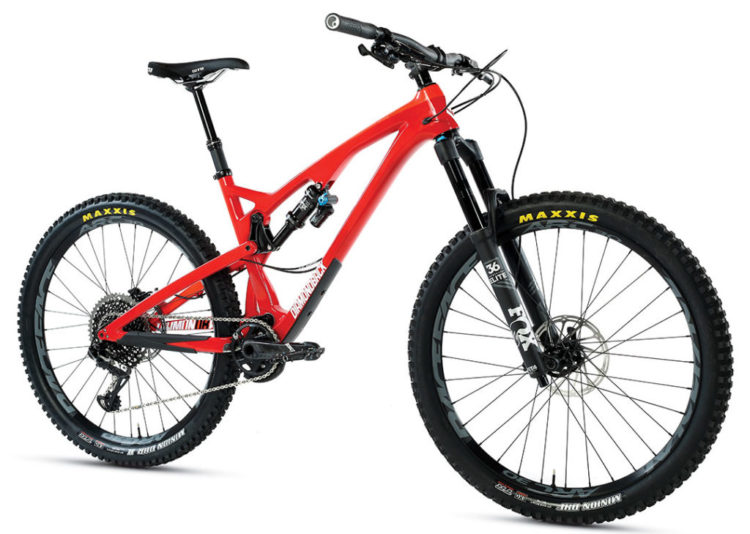 The Diamondback Release was launched in 2016, and later graced the cover of our July issue due to its ability to tackle rough terrain. The following year Diamondback made a few spec changes and added a few more color options; however, behind the scenes, Diamondback was working on a new addition to its fleet—the Release Carbon. We met up with the Diamondback crew to see this new machine in person and to bring it back to the MBA testing lab. Miles and miles of singletrack later, the verdict is in on the all-new Release 5C Carbon.

The Release Carbon features a monocoque carbon frame with internal cable routing, a threaded bottom bracket and Diamondback’s Level Link suspension design. The bike has 130 millimeters of travel along with a 150-millimeter-travel fork. The longer-travel front end gives the Release a slack head tube angle while the shorter-travel rear end aids in pedaling performance. The Release has Boost hub spacing to increase stiffness and comes spec’d with an MRP chainguide attached to its ISCG-05 tab. 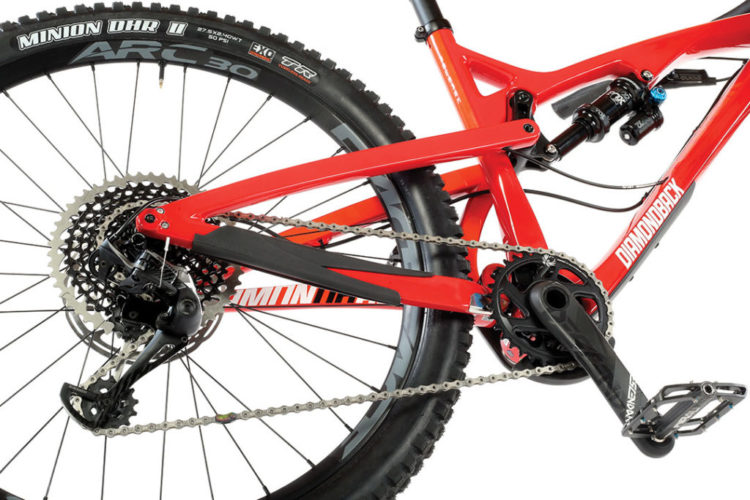 The Release Carbon is sold with two different build kits, including the 5C build we tested and the more affordable 4C option. Diamondback’s Custom Studio will allow riders to customize their bikes down to the bolt. Additional components can be added to your bike, such as MRP’s Ramp Control fork insert or a ShockWiz. Diamondback’s custom-built bikes are assembled in-house at their Seattle office and are shipped in a custom box. Our test riders were more than pleased with the 5C build kit—from its plush Fox suspension to Eagle drivetrain and Race Face cockpit. 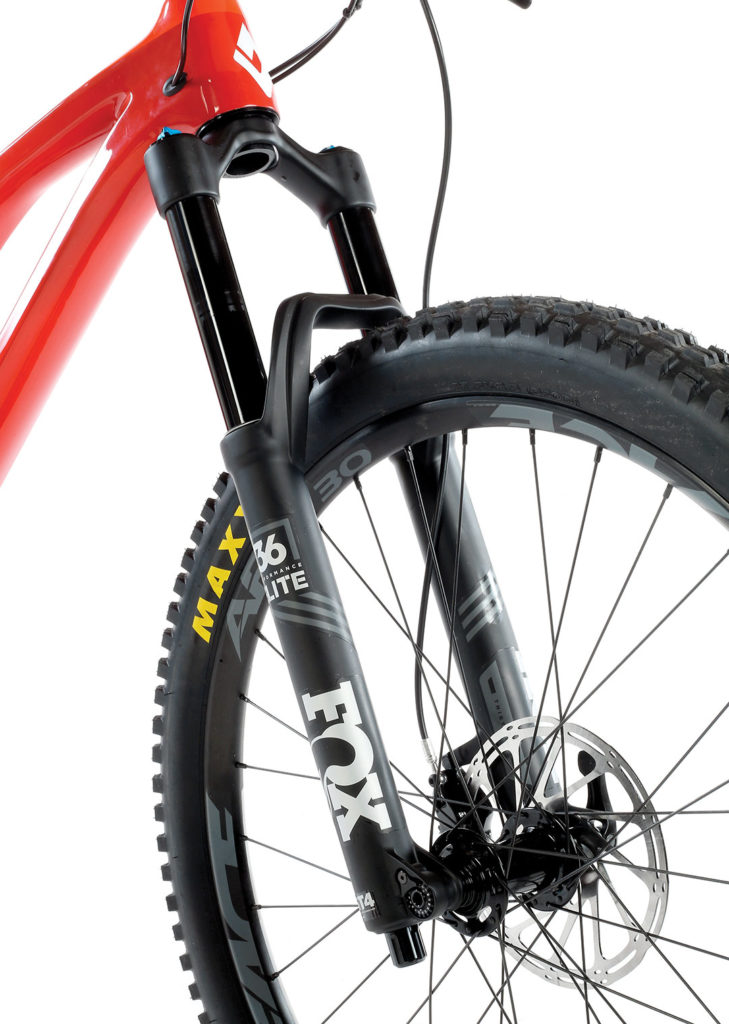 Suspension setup: Diamondback spec’d the Release Carbon with Fox’s Performance Elite suspension, which has dampers similar to their Factory suspension. We decided to use the base setting following Fox’s recommended sag of 20 percent in the fork and 30 percent in the rear. 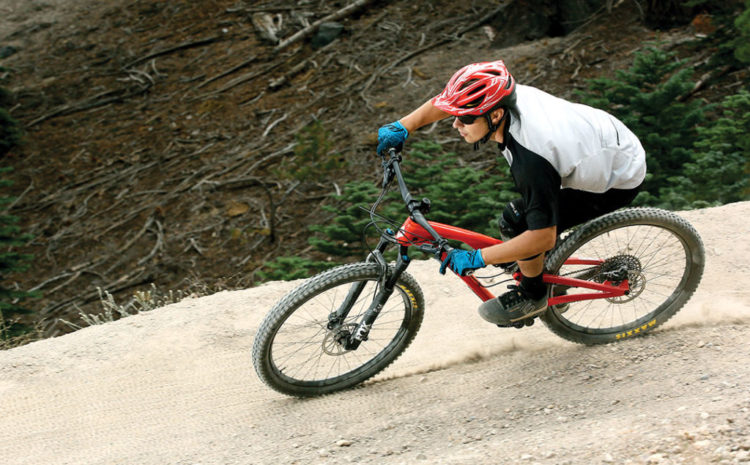 Moving out: The Release Carbon is a confident trailbike with modern geometry and attention to detail. Diamondback focused on spec’ing parts that avid riders would really want, such as an MRP chainguide and a shuttle guard to protect the downtube from becoming scratched by tailgate pads. Diamondback also included a mud fender.

Climbing: The Release 5C Carbon has an efficient pedaling platform. The Release came alive during steep, technical climbs. On long fire-road climbs we flipped the shock into the firmest setting for more support. As we approached steeper climbs, we noticed our front end tracked the ground well, and the short stem and wide bars placed our riders in a comfortable position. 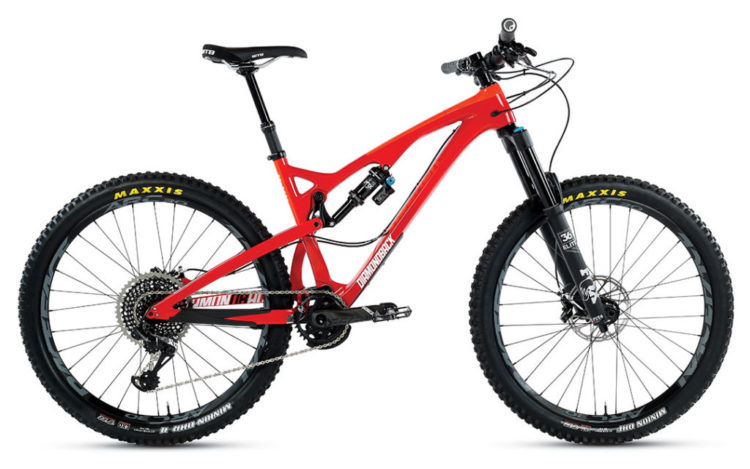 Cornering: The Release 5C Carbon takes full advantage of its wide Maxxis tires and Fox suspension when railing turns. We were pleased with the aggressive tread pattern on our Minion tires and found the bike felt well balanced. The long, slack and low geometry also contributed to the Release’s ability to quickly navigate the trails.

Descending: Diamondback’s Level Link suspension design gives the Release Carbon 130 millimeters of travel, but it feels like a lot more. Our test riders found themselves charging into trail features without fear, feeling confident in the suspension. 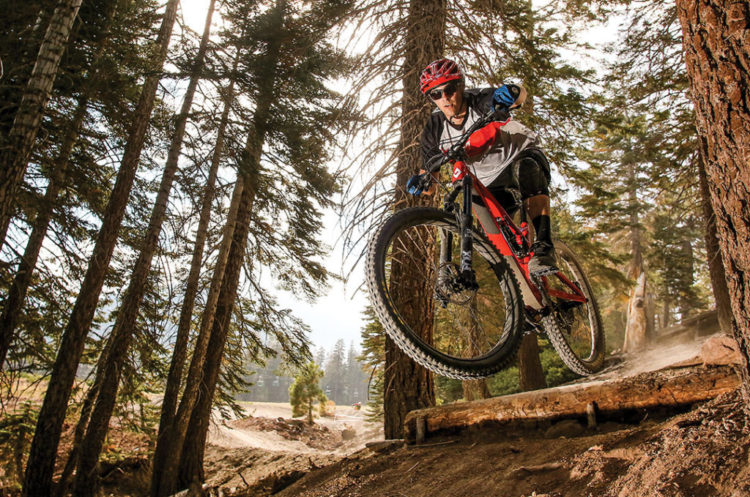 Braking: The Release 5C Carbon uses SRAM Guide RS brakes. They delivered optimal power and kept us in control when barreling down the trails. Our test riders appreciated the tool-free reach-adjust knobs and found the levers had a nice, ergonomic fit.

Diamondback went above and beyond to make sure its customers have everything they need out of the box. Our test bike came ready to rip with flat pedals, shock pump, and an extra derailleur hanger. The Release Carbon has a great build kit; however, we have a few suggestions for upgrades. The new carbon frame is over a 1/2 pound lighter than the previous aluminum one, but the large Minion tires don’t do any favors for the bike’s overall weight. Riders looking to put this bike on a weight-loss program should start there once the stock tires wear out. Also, plan to spend some quality time with your suspension learning how each dial affects your bike. Riders who push their rear suspension hard may want to look into adding volume spacers to the shock to prevent a harsh bottom-out.

Diamondback has adopted the direct-to-consumer model, allowing riders to have their new bikes shipped straight to their front doors. This business model, along with Diamondback’s Custom Studio, gives riders the power to customize a bike and to order additional accessories for it. Once the bike arrives, the new owner will need to install the bars, front wheel, pedals and seatpost. The Release is a capable trailbike that packs a ton of versatility. It’s one of those bikes that lives up to your expectations on the climbs but will blow you away on the descents. Oh yeah, it’s also really affordable and looks better than any other Diamondback we can remember. 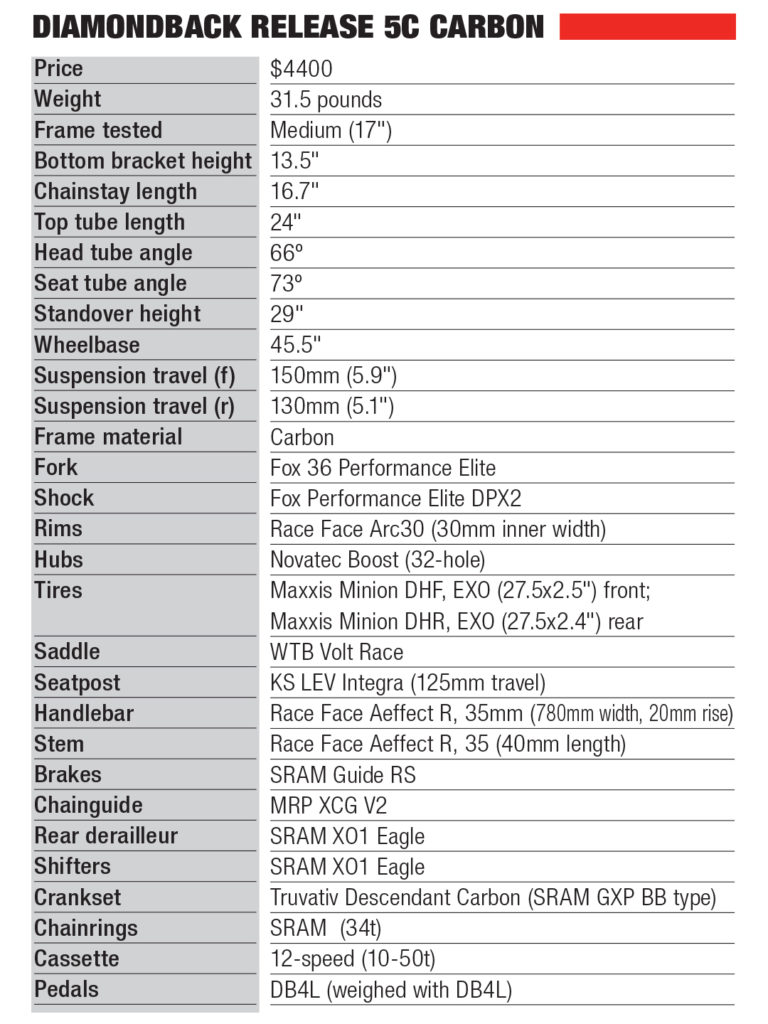