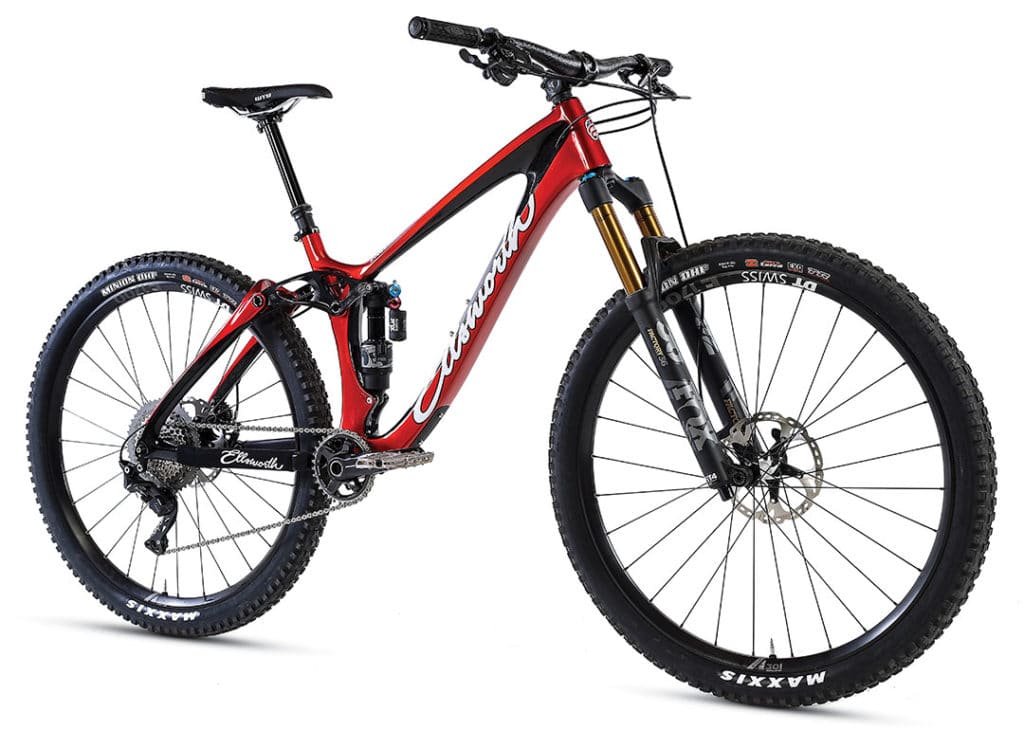 The Evolution builds off the chassis design of Ellsworth’s latest enduro bike, the Rogue, while bringing an aggressive twist to Ellsworth’s previous 29er, the Evolution. The all-new Evolution has evolved from a 120-millimeter-travel cross-country rig into an aggressive 29er trailbike ready to take on singletrack. The Evolution now sports longer travel, a more aggressive geometry. The current market is filled with modern 29er trailbikes that are no longer limited to ripping around a racecourse; instead, these bikes are made to take on the trails with their aggressive styling and ample travel. We decided to see if Ellsworth’s updated Evolution could hold its own against a sea of 29er trail machines. 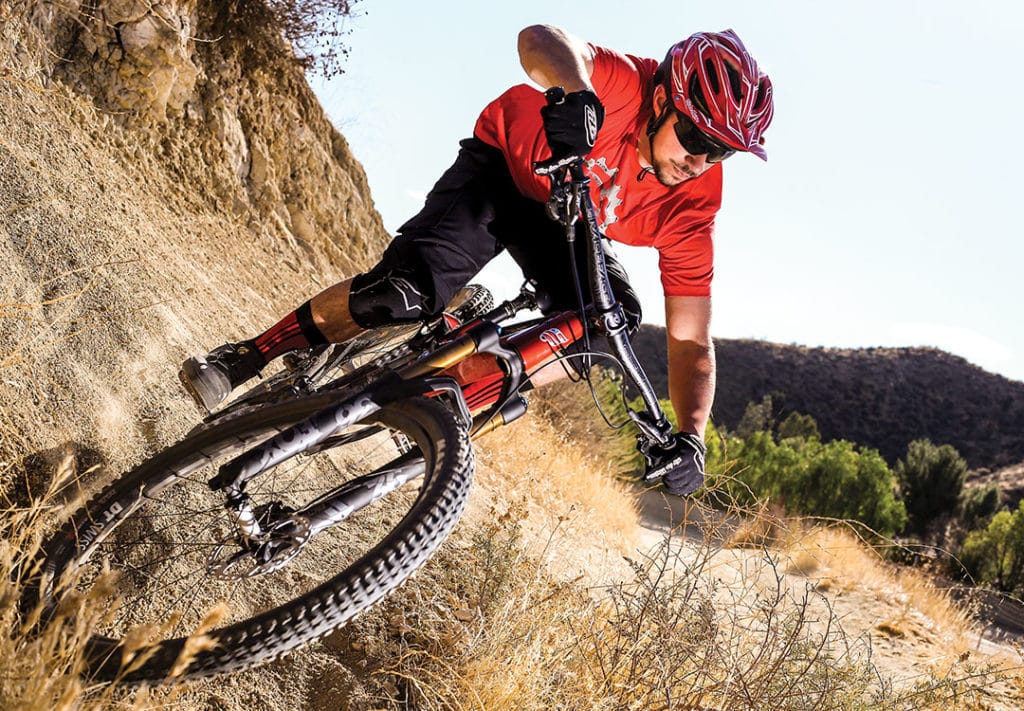 The Evolution is a tried-and-true trailbike made for riders who demand more out of their 29ers. We know the word “playful” is tossed around too much, but there really isn’t a better word to describe the Evolution. It’s a fun-to-ride 29er that doesn’t bat an eye at local cross-country courses and instead searches for epic singletrack. A rider who fancies wagon wheels but who isn’t afraid to take flight over gnarly trails will find the all-new Evolution is well suited for the job.

The heart of the Evolution is its Active Energy Efficient Suspension (AEES), bringing 140 millimeters of travel to the trails. The Evolution sports a convertible platform, allowing riders to swap between 29er and 27.5-plus-inch wheels. Ellsworth then teamed up with Brian Lopes to fine-tune the Evolution’s geometry, giving it an aggressive update with a 66-degree head angle, 17.2-inch chainstays and a 74-degree seat angle. The bike is built with a carbon frame using internal cable routing, a threaded bottom bracket, a Boost Hex Taper rear thru-axle and sealed cartridge bearings. The Evolution is available in five different build kits and five color options. 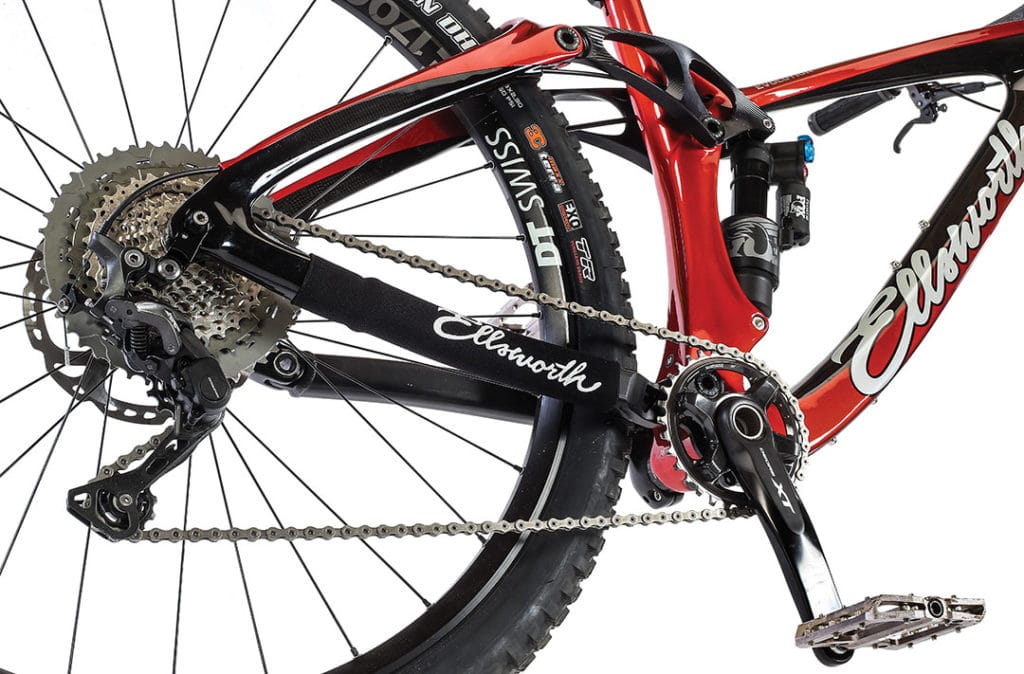 Our test rig came equipped with Ellsworth’s XT 1X build kit, which leaves little, if anything, to be desired. The Evolution flaunts a high-end Fox 36 Factory Series fork with Kashima coating and pairs it with a Fox Performance-series X2 rear shock. The drivetrain is completely made up of Shimano XT components, featuring a 32-tooth chainring and an 11-46 cassette. Ellsworth didn’t cheap out when it came to the brakes, staying true to the XT build kit. Our test bike comes with DT Swiss 29er wheels and Maxxis Minion tires; however, Ellsworth claims a 27.5-plus-sized wheel and tire up to 2.8 inches wide will clear without issues. 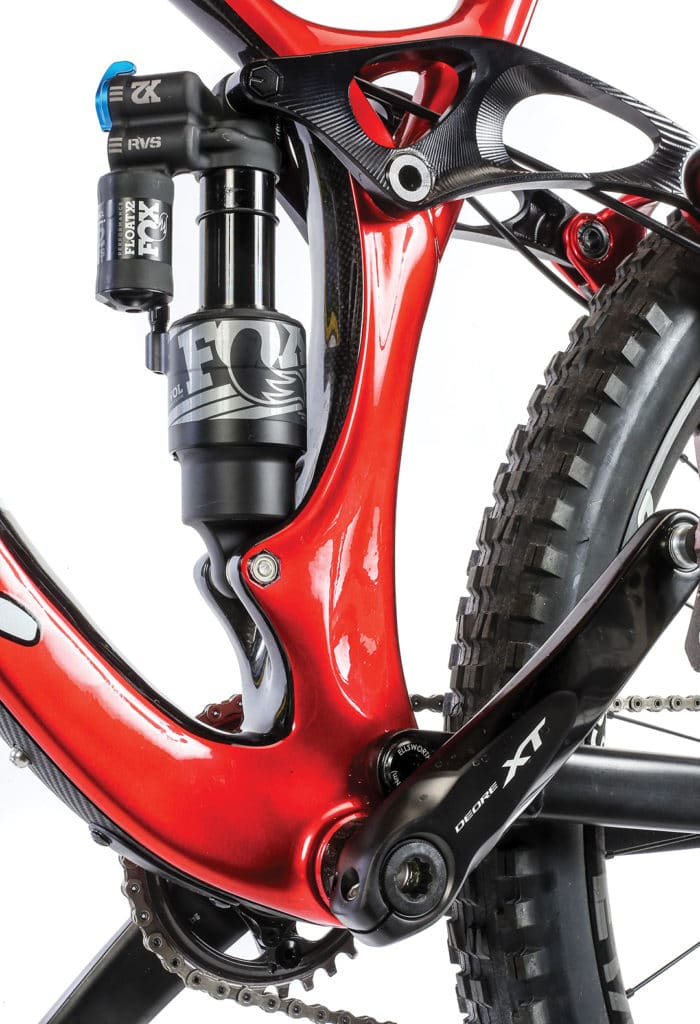 Setting sag: The Evolution might be classified as a trailbike, but its suspension components reveal otherwise. This 5-plus-inch-travel 29er is armed to the teeth with enduro-ready suspension that means business. We wasted no time setting up our Evolution, opting for 20-percent sag up front and 30 percent in the rear. We then made minor changes to the rebound settings and low-speed dials until our testers were satisfied.

Moving out: It quickly becomes apparent that the Evolution is no cross-country race bike as soon as you toss a leg over it. The Evolution’s long reach, slack head angle and short chainstays provide riders with a platform that can best be described as playful. Although the Evolution sports a pair of wagon wheels, our testers often forgot they were even riding a 29er—until, of course, they rolled right over a big rock with ease. 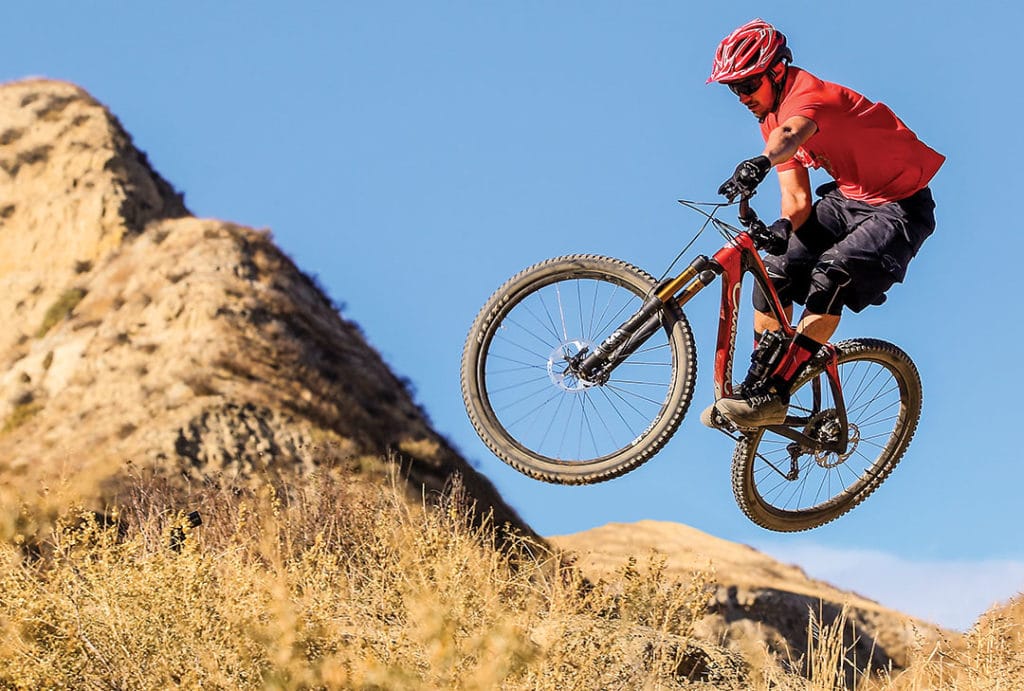 Climbing: The Evolution may have aggressive styling that favors steep descents, but it’s no slouch when the trails point up. Our test riders adjusted the low-speed dial on the Fox X2 shock to the firm setting while tackling long climbs, but found the Evolution to be efficient on shorter climbs with the shock set wide open. Ellsworth’s AEES suspension supported our riders well and, along with the 74-degree seat angle, helped center our weight over the bike, providing great traction. For a bike designed to blast down the trail, the Evolution holds its own on ascents.

Cornering: Short chainstays and a slack head tube angle contribute to the Evolution’s ability to dance its way down the trail. In the past, 29ers were often rumored to have poor handling compared to smaller-wheeled bikes, but those days are long gone. The Evolution’s long front center, short rear end and slack head angle give riders the ability to quickly snap this bike around the trails. The Evolution also surprised our riders with a stiff and stable feel, which was unexpected due to the bike’s large rocker arms. 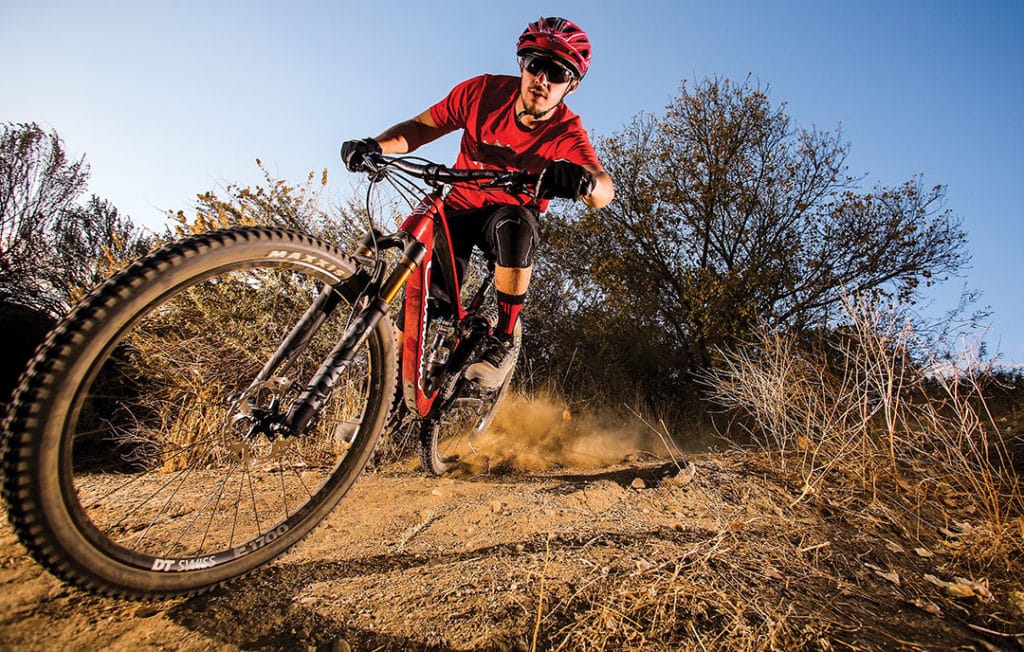 Descending: The Evolution pairs oversized Fox suspension with an aggressive design in order to give riders the utmost confidence when barreling down the trails. The 140-millimeter-travel Fox 36 fork, paired with a 29-inch wheel, allows riders to smash right over the top of almost any trail obstacle they may face, and the same amount of travel out back means there are no issues finishing up the job. The Evolution doesn’t shy away from technical terrain, and to emphasize this fact, Ellsworth added a 150-millimeter-travel dropper post.

Braking: Ellsworth doesn’t try to cheat you out of an XT build kit by spec’ing lower-level components in places where riders may not notice, such as the brakes or shifters. Our test bike had a true XT build from the ground up, and, as always, our Shimano brakes treated us well, providing ample stopping power, which Ellsworth’s AEES suspension delivered nicely to the ground.

The Evolution comes ready to shred straight from Ellsworth, but a rider could make a few changes to further enhance the performance of this machine. The first upgrade you could make, if you have the money, is opting for Ellsworth’s Reynolds carbon rim upgrade. This will run you an extra $1925. If you’re looking for some more reasonable upgrades, we would suggest converting the wheels and tires to a tubeless setup. Next, we would suggest that you evaluate your ideal bar width, as the 800-millimeter bars that come spec’d are likely too wide for most riders. 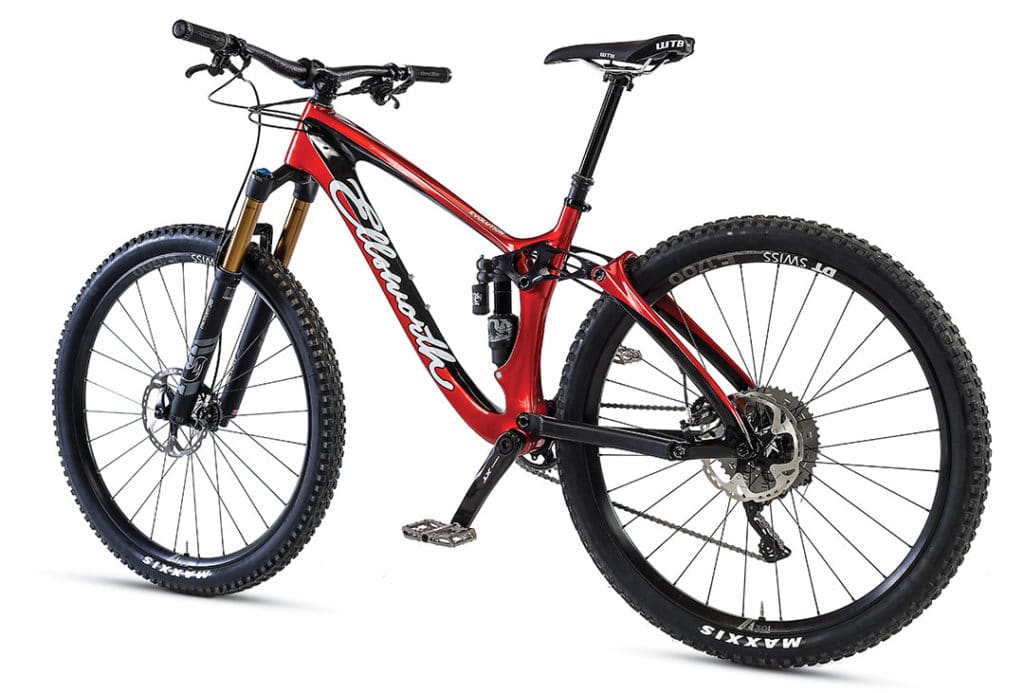 The key word for Ellsworth’s Evolution Convert is aggressive. This is a bike that means business and begs for a rider willing to push it to the edge. The Evolution takes on rough and rocky trails without fear, providing its rider with a smooth and predictable feel. Whether you’re a diehard 29er guy or someone who wants an option between two popular wheel sizes, the Evolution could be the bike for you.