We’ve tested a variety of rack styles over the years and while each has its own benefit, there’s one that shines above the rest. If we have a vehicle that’ll accommodate one, we’ll take a hitch-mounted , tray-style rack over any other. No removing wheels or attaching to the frame of the bike. Kuat’s high-end offering is the $549 NV. While the Kuat NV is a 2-bike rack system, the company also provides an add-on which increases the carrying capacity of the rack to four bikes. Enough bikes to fill the seats in your car and still have room for a shuttle driver, cheerleader or hitchhiker.

We went for the full package deal and opted for the NV with the add-on to make it 4-bike friendly. Starting with some specs on the NV: 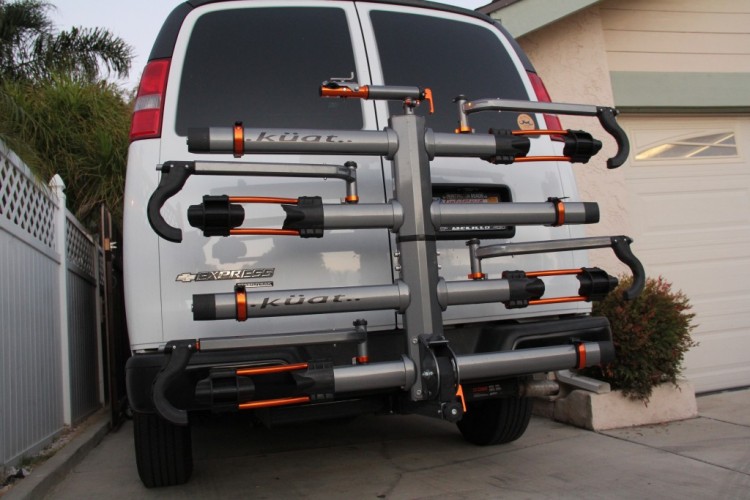 The Kuat NV rack is, by far, the sturdiest bike rack we’ve ever used. The amount of plastic used is minimized and each piece of it feels hefty, from the material itself to how it connects up with the rest of the rack. Each of the bolts are beefy and provide peace of mind on dirt roads cratered with potholes. While it’s rated at carrying 160 pounds, we exceed such weight and had no reserve jumping up onto the rack when quickly accessing something through the back doors of our van. The hand-tightening cam system is one of the features that adds to the solid characteristic of the rack and is possibly the one that stands out most in our eyes. Without any tools, we’re able to place it on any vehicle, secure it with the included locking pin and then tighten down the cam in order to remove any bit of play in the rack/receiver interface. The NV has made history of the days watching our bikes sway back and forth in the rear view mirror.

The ratcheting arms clamp onto the region between the tire and the bridge of the fork chassis. We haven’t had any instances of it rubbing the paint in any excessive way that would ruin the aesthetics of the work. Ratchet straps and buckles hold each of the rear tires down and they seem to perform their simple duty well. The built-in Trail Doc repair clamp is what separates the rack from the rest of the pack as it addresses a common issue. It helps with lubing chains at the trailhead, making some last minute adjustments, or giving your bike a proper wash while treating your vehicle to a spit-shine. It certainly isn’t a repair stand you’d want to back into your garage and use while overhauling your frame, but it works in a pinch and has come in handy numerous times.

The tongue of the rack (where it plugs into the receiver) provides a length most suitable for sedans or hatchbacks. On both vans and some SUVs, we had issues with the handlebar of the closest-to-the-vehicle bike not clearing the rear window and essentially cut the 4-bike rack down to a 3-bike that could hold a fourth only if we turned the handlebars. We also found that, with the add-on installed, the tilt function would leave the rack lying on the ground. While it does have a stopper to prevent the rack from tilting down too far, the rack usually ended up lying on the ground right before the stopper would engage. This didn’t effect the function of the rack, but certainly scratched up the outer arm with time. No adjustability where the trays sit? We see this causing problems between handlebar and seatpost interactions. Lastly, $938 is an extremely hefty price tag for the NV and add-on package. Kuat does offer the $449 Sherpa rack or $289 Transfer rack, but neither can accommodate four bikes. The Transfer can be purchased in a model that holds three bikes. Pick your battles.

The Kuat NV is the rack for riders who like gadgets. Shiny, refined gadgets that are svelte and highly functional. While the many of the features may not be perfected, they’re at least there, which is more than most other rack companies can claim of their products. If you’re looking for simplicity on a short-chained budget this may not be the rack for you, but if you’re looking for the most secure and hefty hitch-mount rack available, look no further.

Trail Bike Racing At Its Finest – The Grand Junction Offroad

XC TRAINING TIPS: A DISH OF SUFFERING WITH A SIDE OF PROGRESS