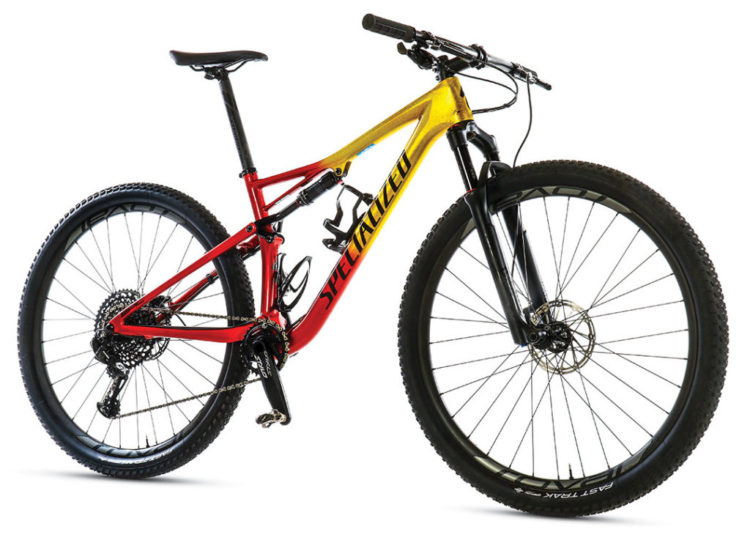 The Epic was introduced by Specialized in early 2000 with what seemed to be a very novel concept—let’s put a brain on this bike. It sounded crazy, but the idea was actually quite simple. Specialized wanted to build a bike that would have a lockout that worked without needing a remote or lever to actuate it. The suspension would be “smart,” knowing the difference between pedaling input and trail obstacles, and be able to activate the suspension without robbing the rider of power. Well, this is the latest version of that “smart bike,” and it comes with a brain that Specialized claims has a higher IQ than any Epic that has come before it. There are few bikes with as prestigious a history as the Epic. Over the years this cross-country race machine has racked up many World Cup wins and even Olympic podiums, with Jaroslav Kulhavy winning the gold medal in London in 2012. We got our hands on the new Epic to see how it compared to the previous generations. 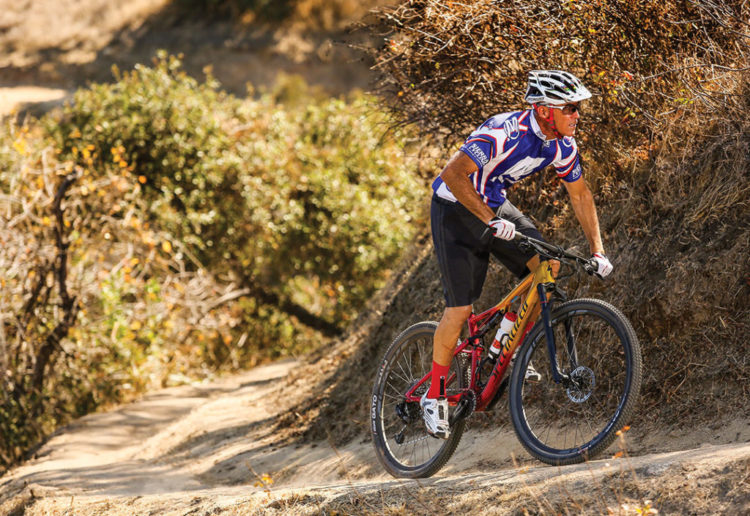 Modern cross-country bikes have become more capable recently, keeping up with the increasingly technical trails being thrown at riders and racers. The Epic has a modern geometry with a relatively slack 69.5-degree head angle and a fairly steep seat tube angle. The front end of the Epic was lengthened a bit, and the chainstays were shortened, with Boost 12×148 rear spacing for more stability when descending. The Epic was one of the first full-suspension bikes to make room for two bottle cages in the main frame, and Specialized was able to carry this over to the new generation. The heart and soul of the Epic is cross-country racing, with the intellect coming from Specialized’s Brain suspension system. 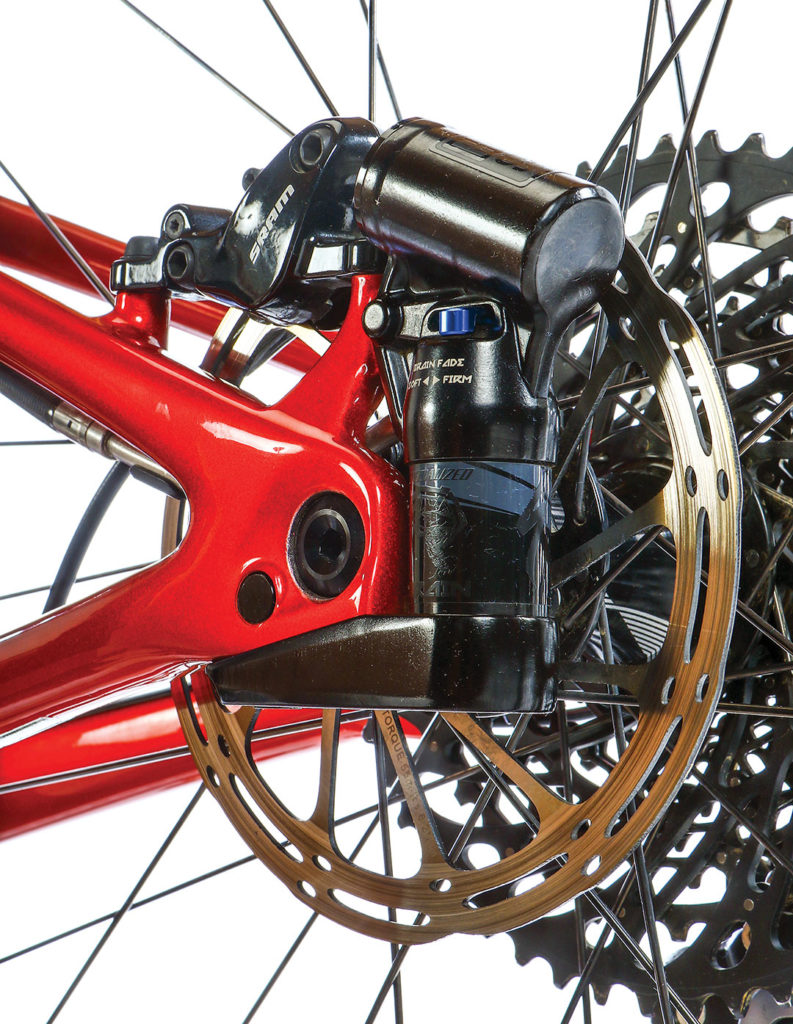 Specialized worked with RockShox to develop the new system, which is slimmer and more responsive with the Brain being placed right on the axle. The Brain is an inertia valve that gives riders pedaling support but opens up and allows the shock to go through its travel when it encounters a big-enough impact. This proprietary shock also uses Specialized’s AutoSag technology to make suspension setup a breeze. Specialized has been using FSR on its bikes for several years, but the new Epic got a redesigned single-pivot linkage. Our test bike has a full FACT 11m carbon fiber frame and uses internal
Keeping it simple: SRAM Eagle has become the preferred drivetrain for dedicated XC racers with its 10-50 cassette. Our test bike came stock with a 32-tooth chainring; stronger riders will want to swap this out for a 34-tooth for a little more top-end speed.cable routing for a sleek finish. Specialized moved to a threaded bottom bracket on the new Epic, keeping the durability high and maintenance low. 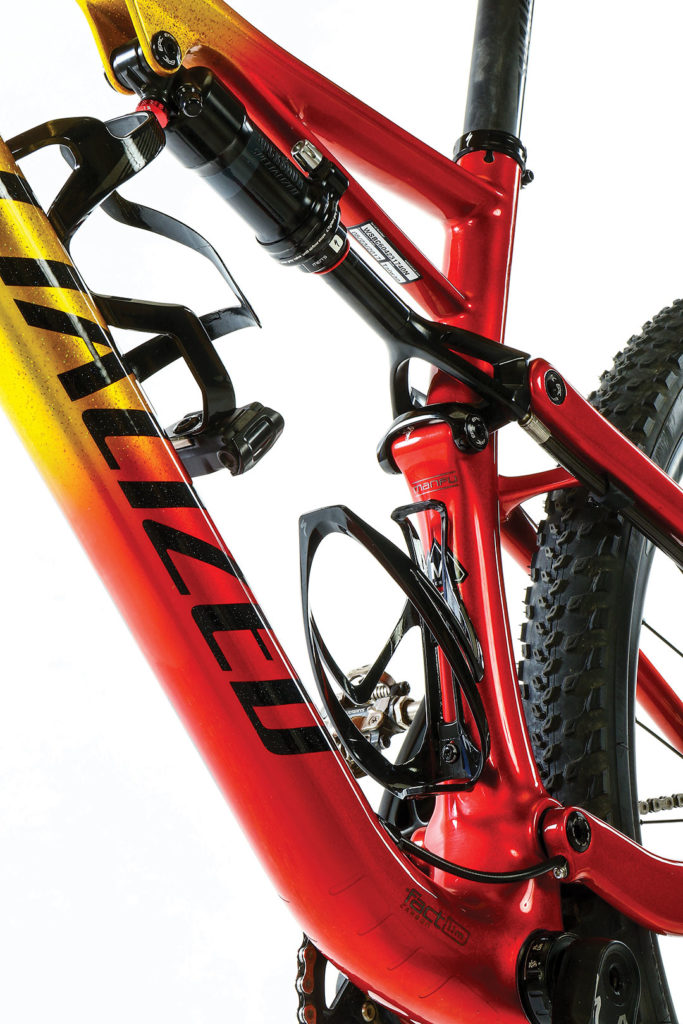 The Epic Expert sits right in the middle of the lineup, with top-level machines getting the S-Works treatment and lighter component packages. Our test bike came with a SRAM Eagle GX drivetrain that delivered consistent shifting during our testing. The SRAM Level TL brakes gave our test riders plenty of modulation and control, even on technical bits of trail. The RockShox SID fork gave us plenty of adjustability and added to the racy feel of the Epic. 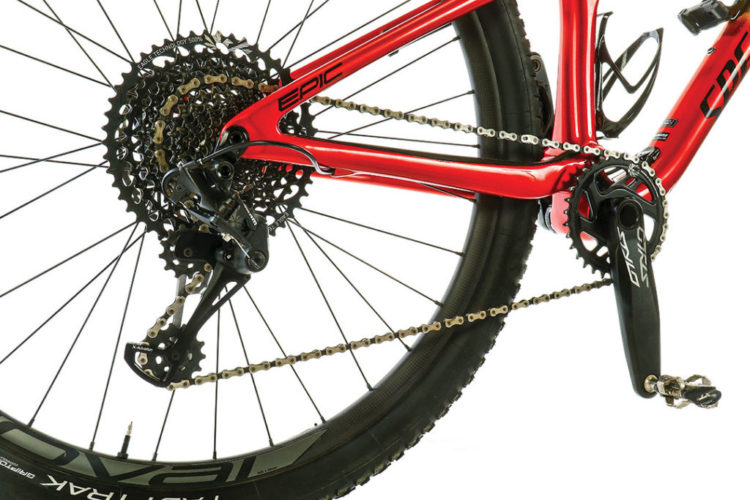 Moving out: The Epic offered our test riders plenty of adjustment when it came to dialing in the fit. We found ourselves dropping the stack height as low as we could for a more aggressive position. The stock saddle and handlebars were very ergonomic and were comfortable during long days in the saddle.

Suspension setup: Specialized designed AutoSag to take the guesswork out of setting the air pressure on your shock. We inflated the shock, and then, while seated on the bike, opened the valve to release the excess air. This put us right at 25-percent sag, which was a good starting point, but we did put additional air in after a couple of rides. The Brain offers four clicks of adjustment in the rear. For our first rides, we put it in the firmest setting to get a feel for the extremes in the range. In the SID fork, we ran 20-percent sag with two bottomless tokens and the Brain Fade in the middle. The Brain adjustment on the fork has a lot of adjustment and will give riders more than enough to choose from.

Climbing: On smooth, rolling terrain, the Epic pedaled quickly, with the Brain keeping the suspension firm and responsive. The steeper seat angle allowed us to shift our weight forward and crank hard up steep terrain. The broad gear range gave our test riders some relief after long grinds. Out of the saddle the Epic was stiff and responsive, with minimal flex out of the rear triangle. 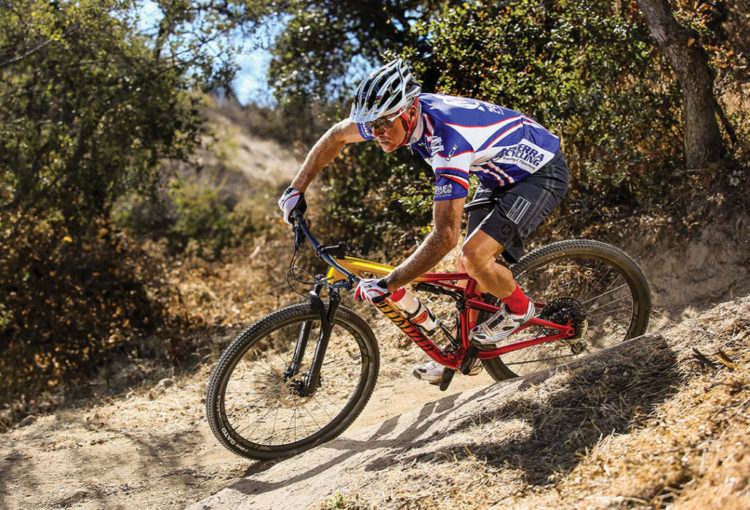 The Brain: Specialized initially introduced the Brain back in 2003 as the Holy Grail of suspension technology, and Specialized has continued to use it over the years. With the Brain turned on, whether one click or all the way in the firmest setting, there is a pronounced knocking that is felt when the valve opens up on square-edge hits or transitions from smooth to rough terrain. Once the valve is open, the system operates smoothly, but closely spaced impacts create some rear-wheel chatter. 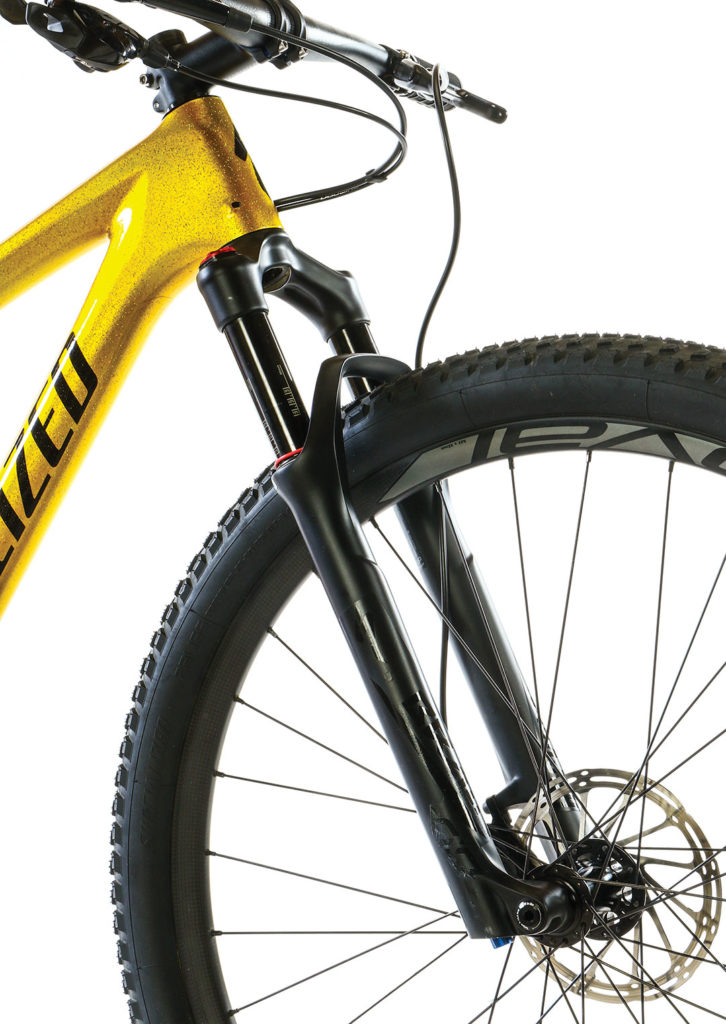 Our test bike came with a quality component spec, especially considering the price tag. Most of our test riders agreed that a larger 34-tooth chainring would give them a little more top-end speed without compromising climbing ability. If you are a serious racer looking to shed some weight, replacing the alloy handlebars and seatpost will be a good start and would not break the bank. 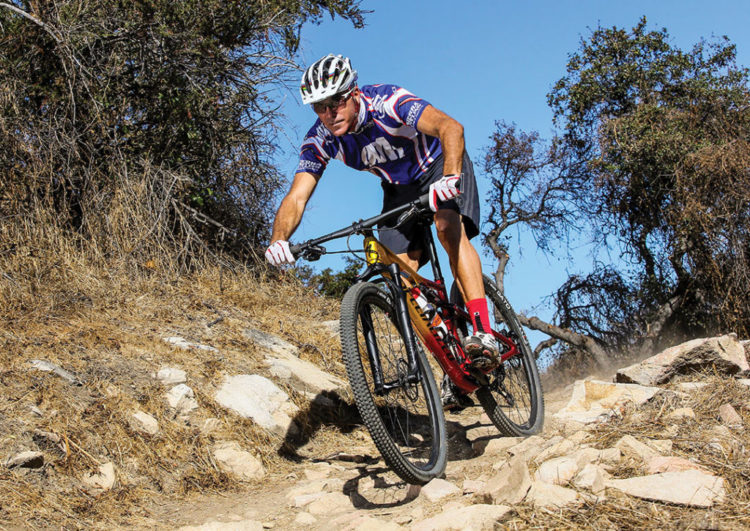 The Epic is a bike that is all business when it comes to performance and purpose but isn’t afraid to get rowdy on the trail. The new machine is lighter, stiffer and has a more efficient suspension design than previous generations. Compared to other cross-country race bikes currently available, the Epic stands out as a proven performer with impressive engineering and world-class race results. www.specialized.com 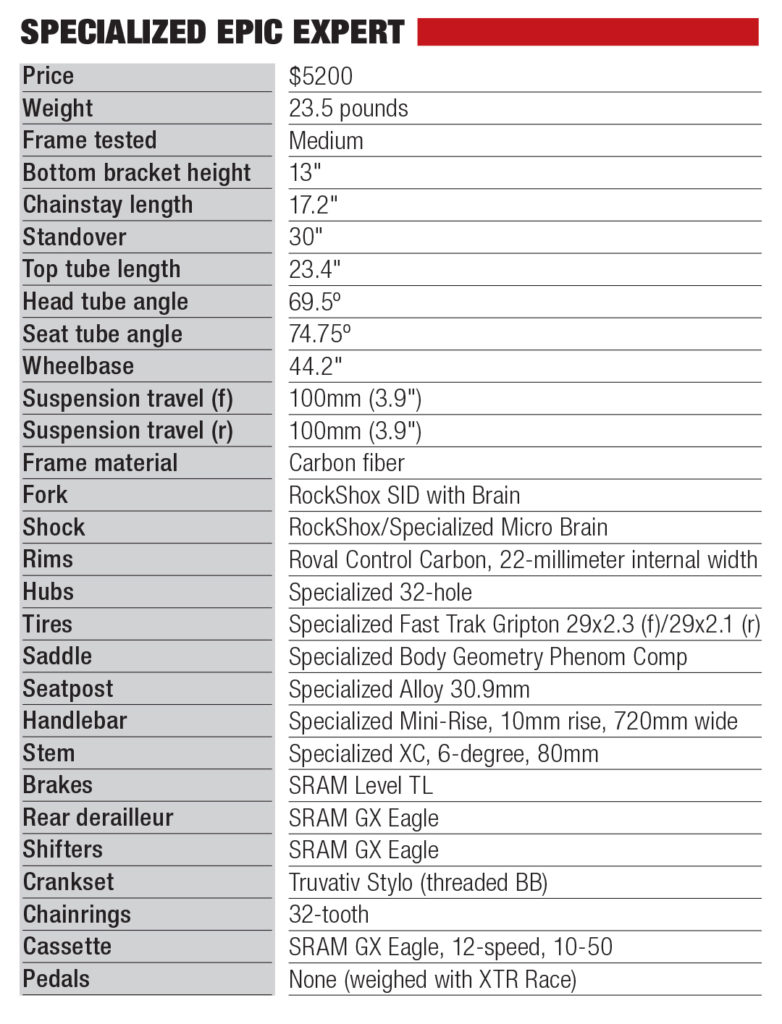