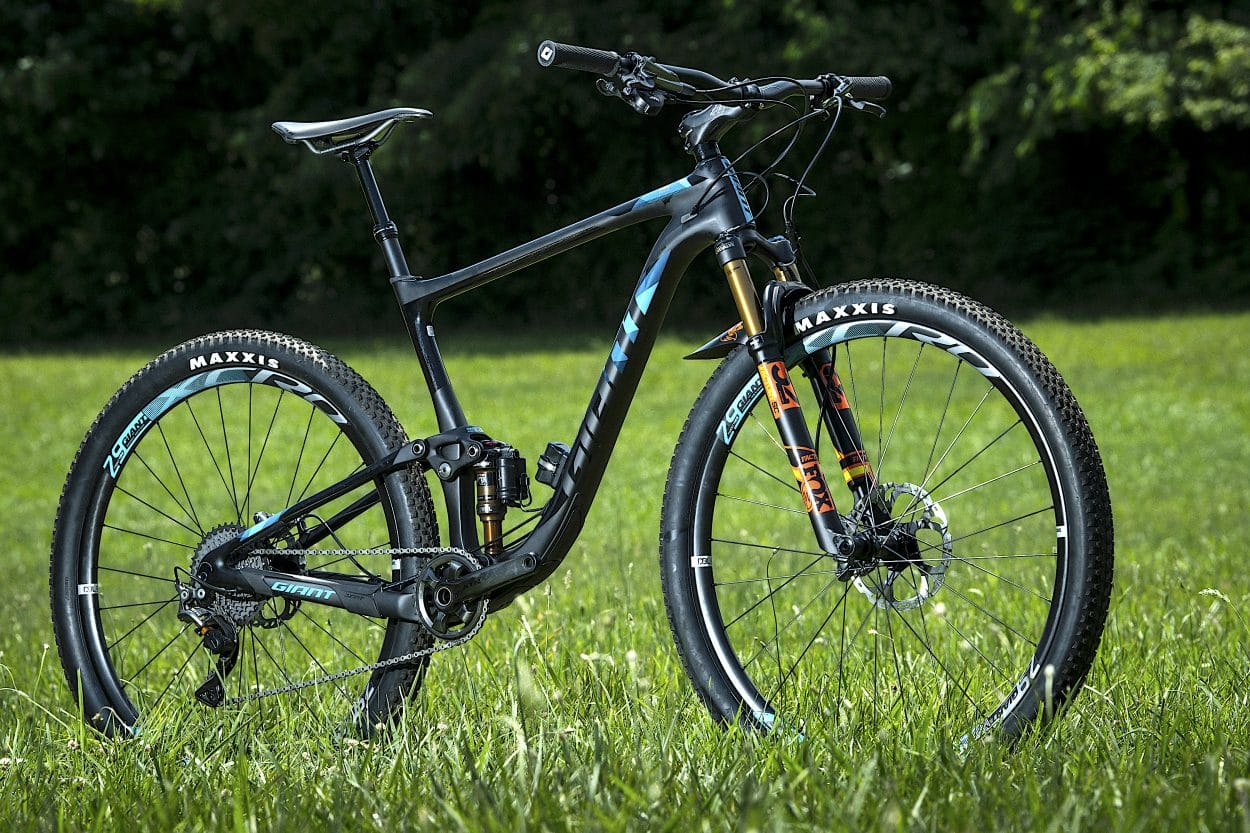 There have been rumors for several years now about Fox Live and when the system would be available to the public. While Fox has released some bits of information during the development, they have kept pretty quiet about just what the system would actually do. Fox recently announced the Live Valve OEM spec on Polaris’ Dynamic UTVs and most recently on the Ford Raptor for 2019. Now, for 2019, Fox Live is finally available for mountain bikes, and the system has some pretty impressive technology that will greatly benefit some riders. We spent a few days in Asheville, North Carolina, meeting the engineering team behind the technology and riding some of the East Coast’s best trails. 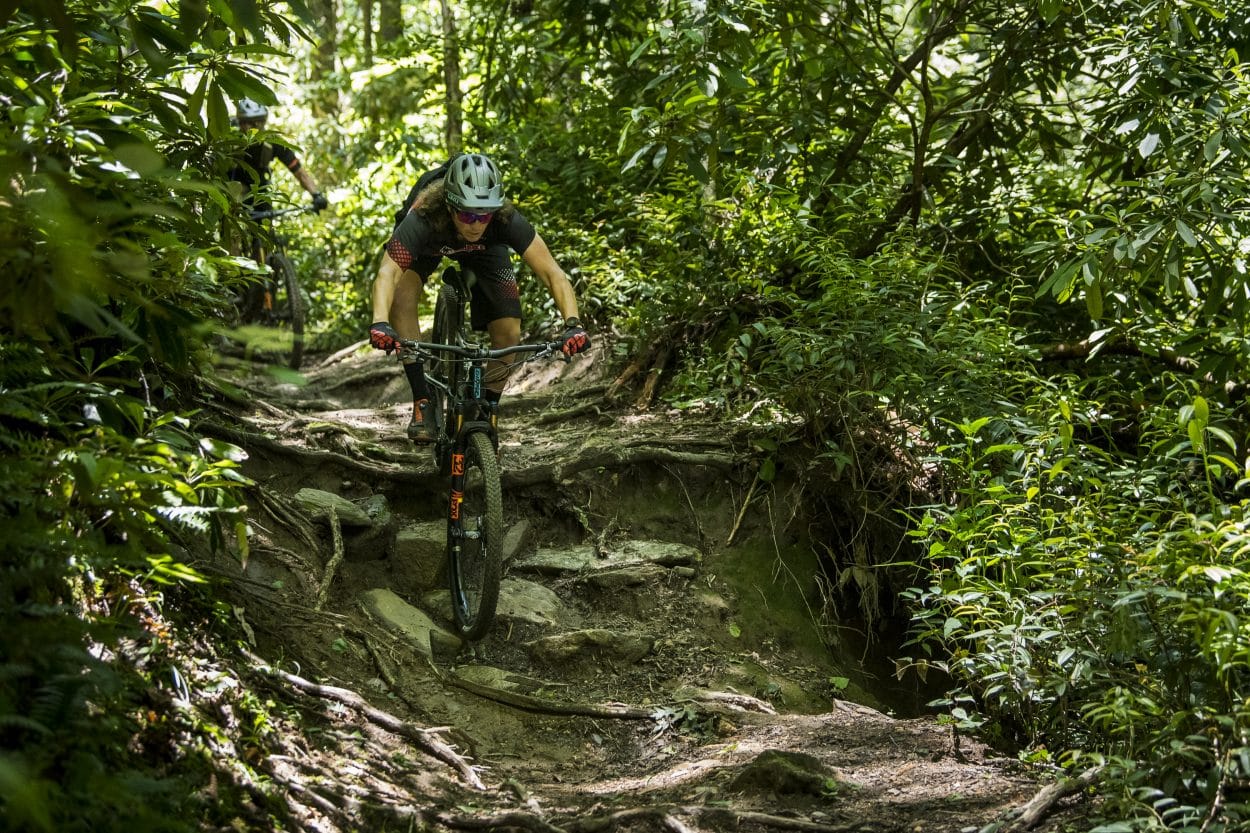 WHAT IS FOX LIVE?

The end product of Fox Live is simple. It’s an automated system that detects bumps and opens or closes your suspension when riding. So, when you’re climbing or pedaling, the suspension stays firm, but when you start descending or hit a bump, the suspension opens up. The whole idea behind Fox Live is that it takes all of the guesswork out of your suspension settings. You simply go ride your bike. There are five essential parts that make up Fox Live— solenoids, the battery, the controller, the sensors and the algorithm—all of which are activated by rider input in relationship to the trail. The hardware only has two buttons, which makes it very user-friendly and belies just how advanced the entire system actually is. 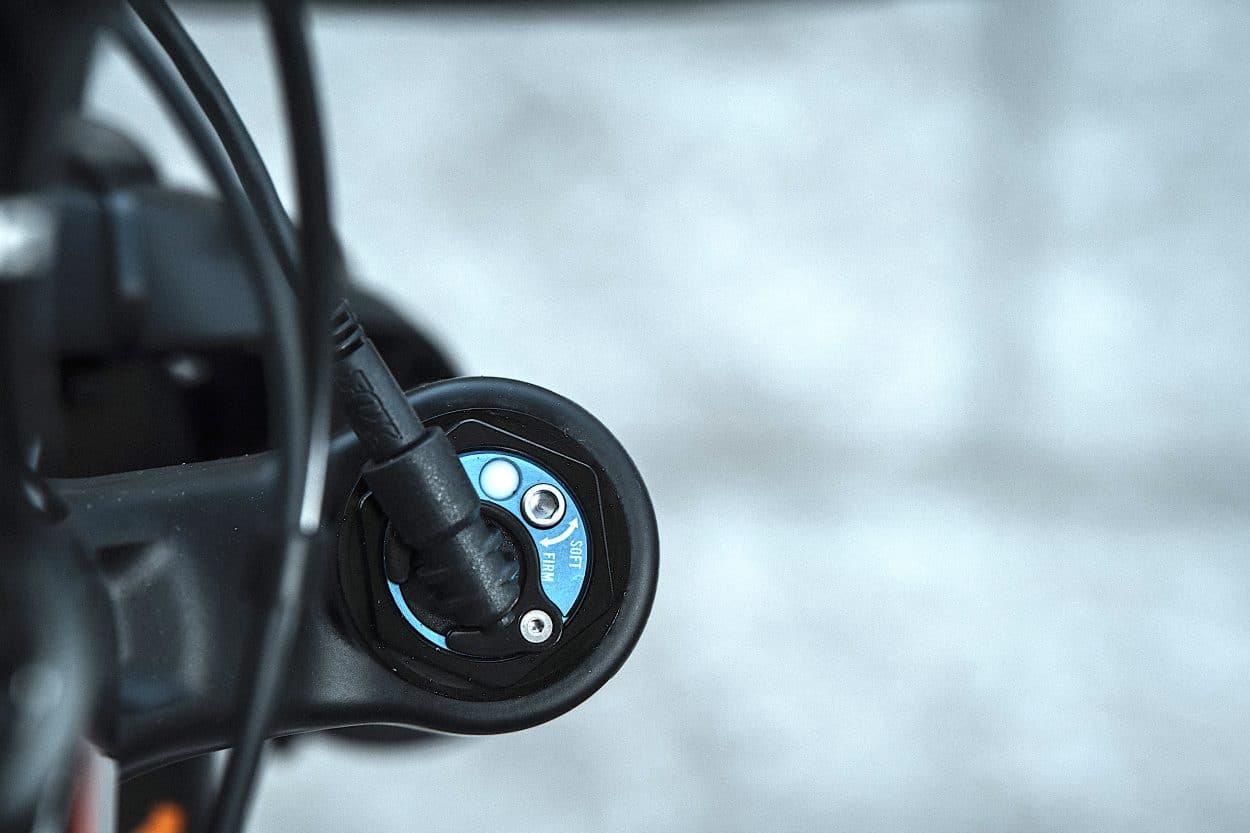 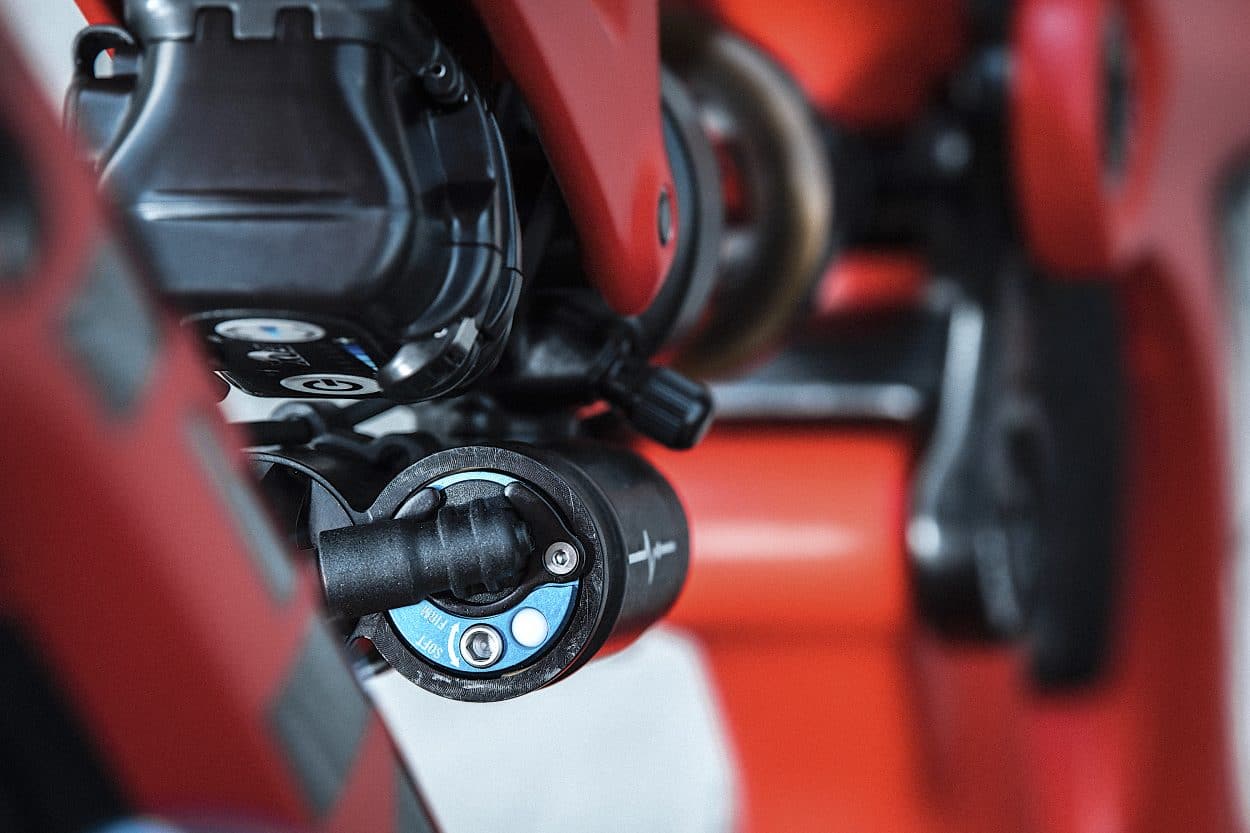 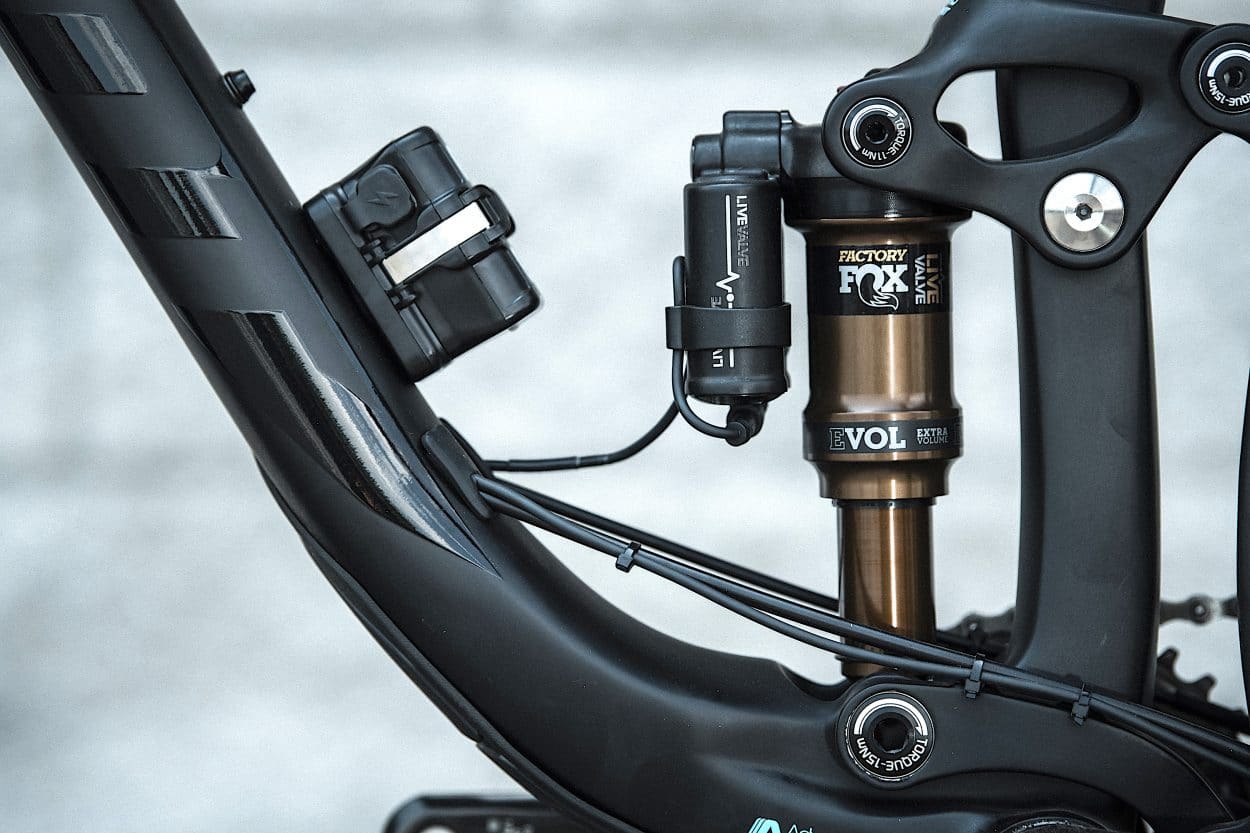 The entire Fox Live system is complex, but the solenoids in the valves themselves are one of the key components in allowing the whole product to come together. Solenoid valves are common in other industries and known for being durable and effective. Fox Live uses what is called a “latching solenoid” that is held in place with magnets that don’t require any power to be retained. A small pulse of energy will create polarity and move the solenoid about 2mm to open and close the valve. There are various types of solenoid valves. Fox uses a proprietary valve specifically for mountain bikes. The valves have to be small in order to fit inside of a shock or fork, but they also have to use a low amount of energy. The same solenoid is used in the fork and shock across the entire lineup. 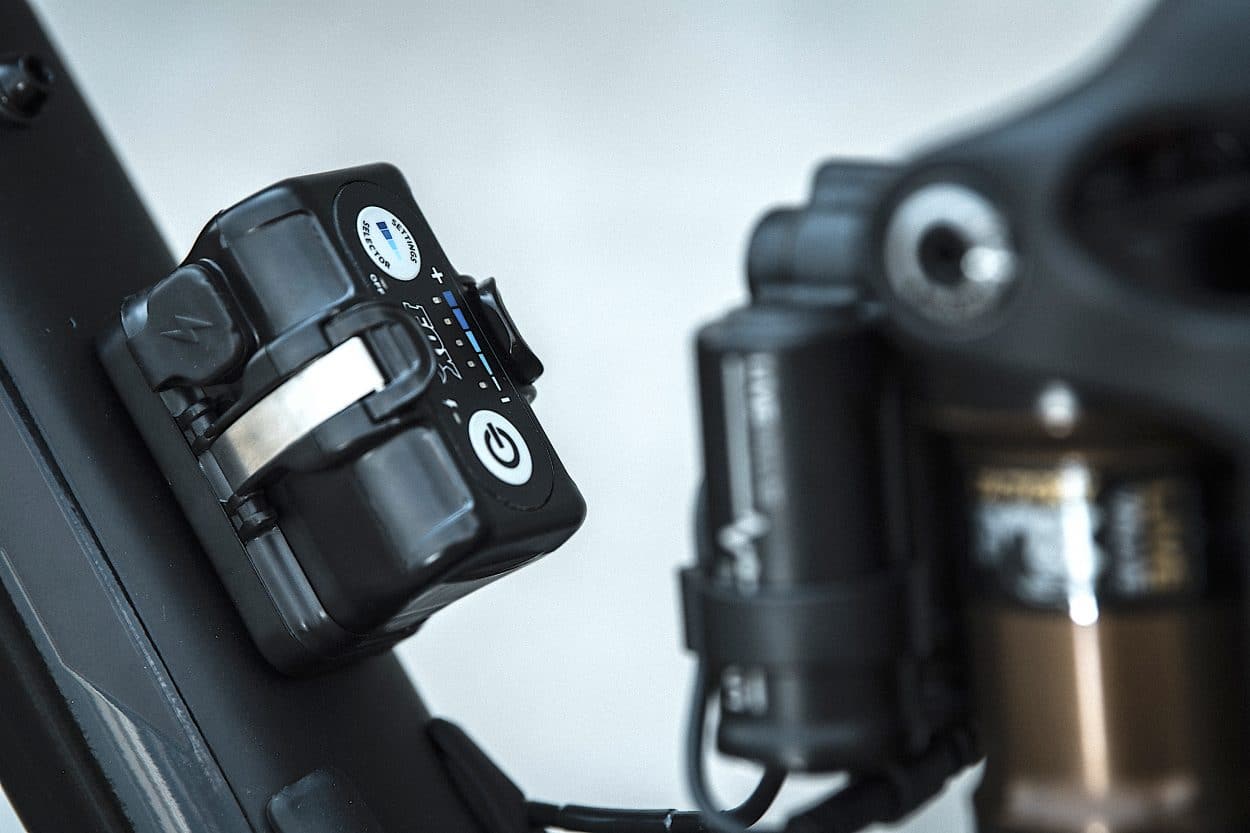 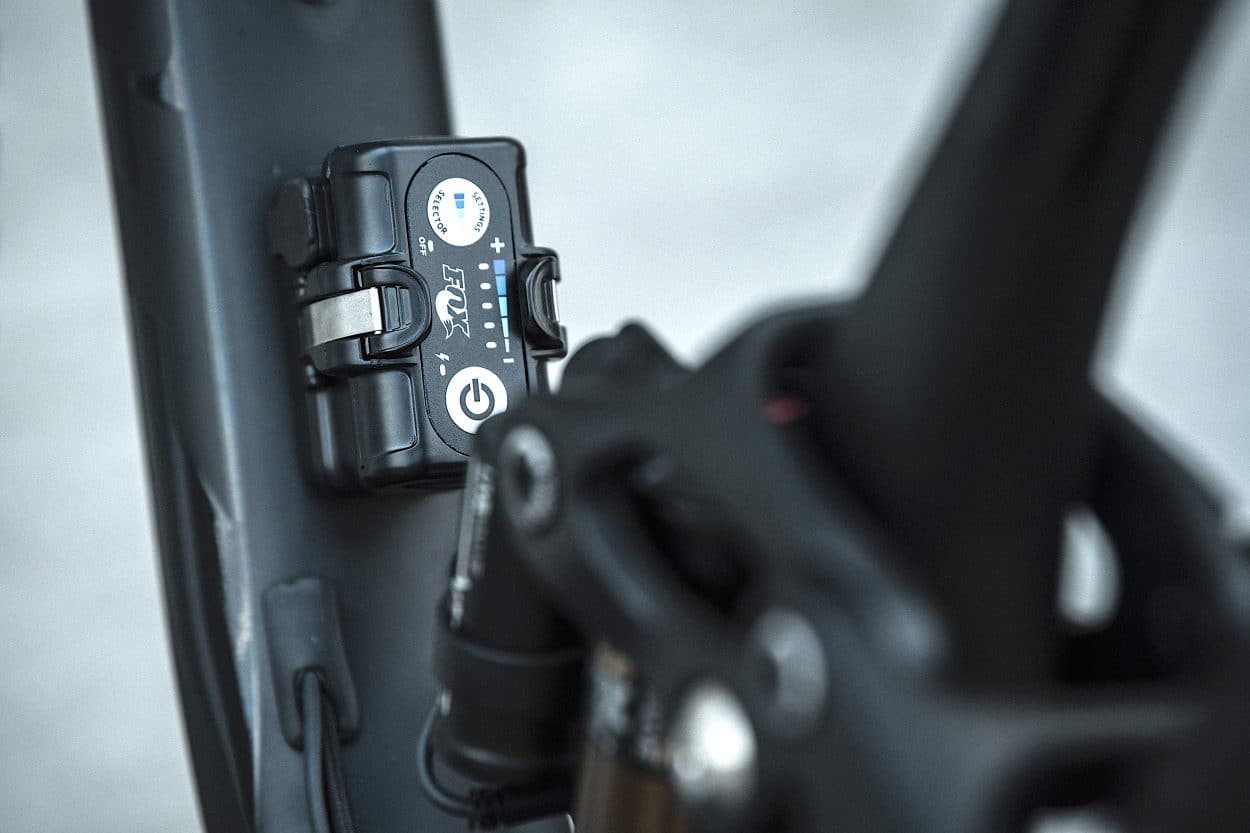 While there are four main parts to the whole system, the controller is a micro- processor that actuates the entire system. The controller is able to detect if the bike is on the ground or in the air, and whether you’re climbing, descending or on flat terrain through the use of “pitch detection.” Pitch detection is used through a three-axis accelerometer with two sensors. One sensor is mounted to the fork and the other to the rear wheel. When an impact is detected, the sensors send a response to the controller in 3 milliseconds.

There has to be energy to actuate the solenoids, but they require very little power. Fox was able to use a 7.4-volt battery (the same cell as Shimano Di2) to power the Live system. The battery mounts to the controller and has five LEDs to indicate which bump setting is being used, along with the on/off button. In the event you forget to turn off the battery, it will automatically turn off after 90 minutes of no impacts. The battery life is very generous. The battery will only need to be charged about once a month if you’re riding several times a week. If the battery dies while you’re on a ride, the suspension will default to the open mode. 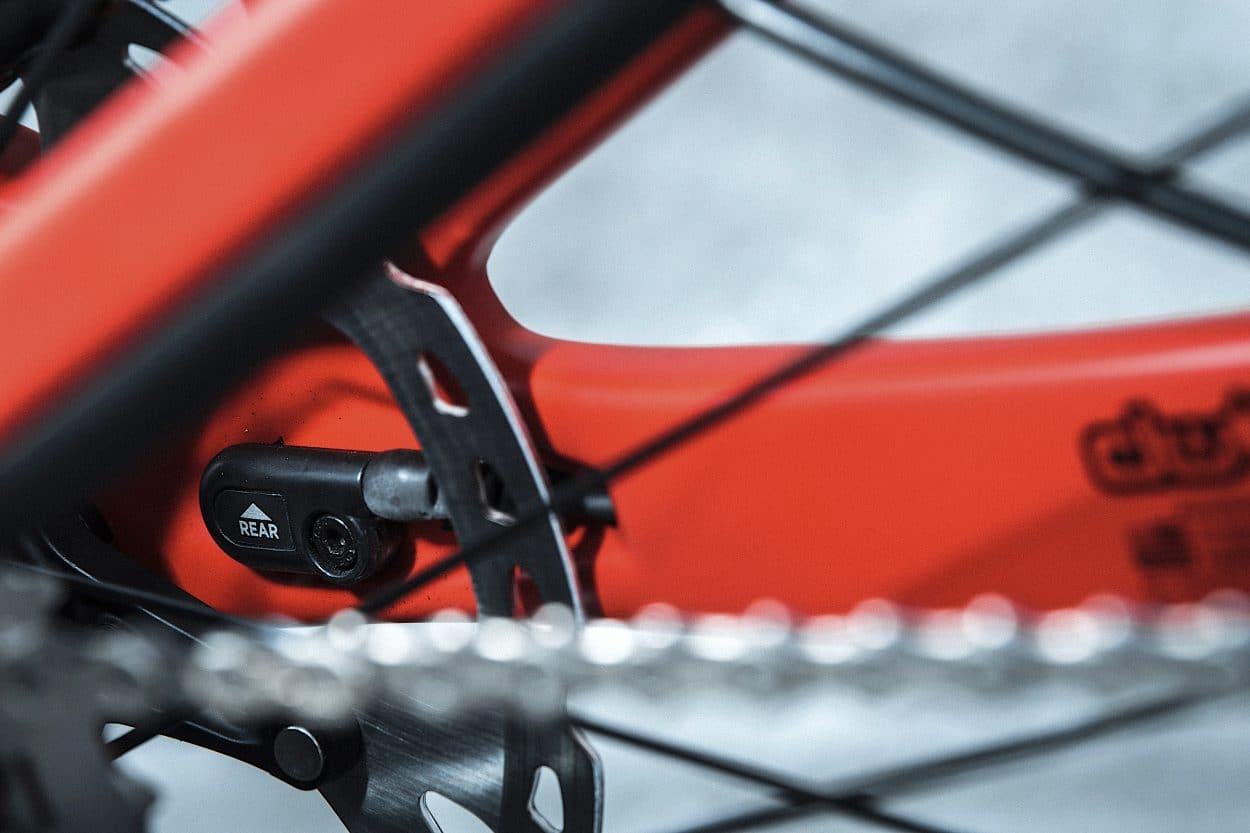 As mentioned in our description of the controller, the Live Valve uses a few sensors that send signals when there’s an impact. There is one sensor attached to the back of the fork bridge, one sensor mounted right next to the rear wheel axle, one sensor for the shock damper and another for the fork damper. These sensors initiate timers programmed into the algorithm that determine how long the solenoids should keep the damper valves open or closed. This is a key component to the whole Live system and really what helps set it apart. 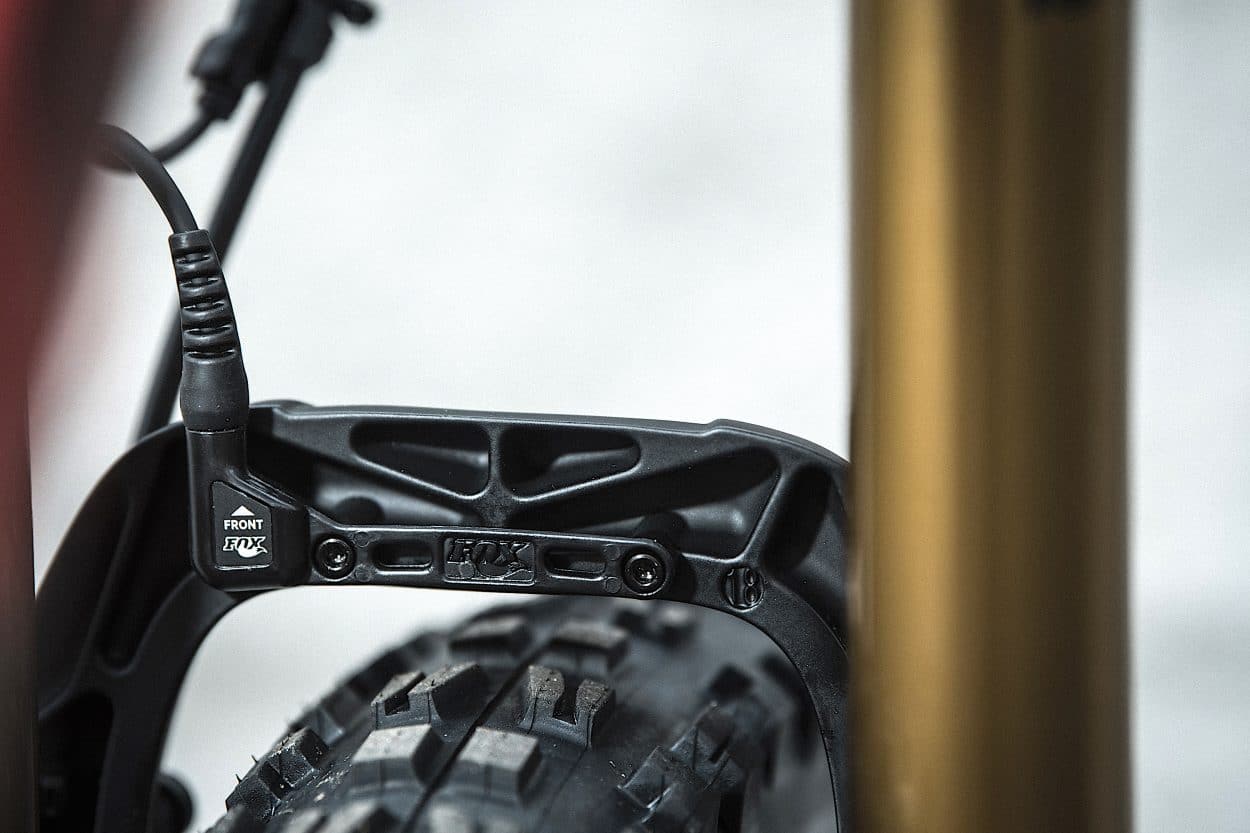 This is arguably the most complex part of the entire system and what took the most time for Fox to perfect. There are several parts to the algorithm that determine what type of terrain you’re riding and how the system should react. The algorith is programmed to know whether you’re climbing, descending, on flat terrain or free-falling (pitch detection), and evaluates this data 1000 times per second. When a sensor detects a bump, it sends a signal to the controller, which initiates a timer that opens the valve via the algorithm. The timer when descending operates longer than when climbing. Riders will want the suspension to close quicker when climbing to help with pedaling support. 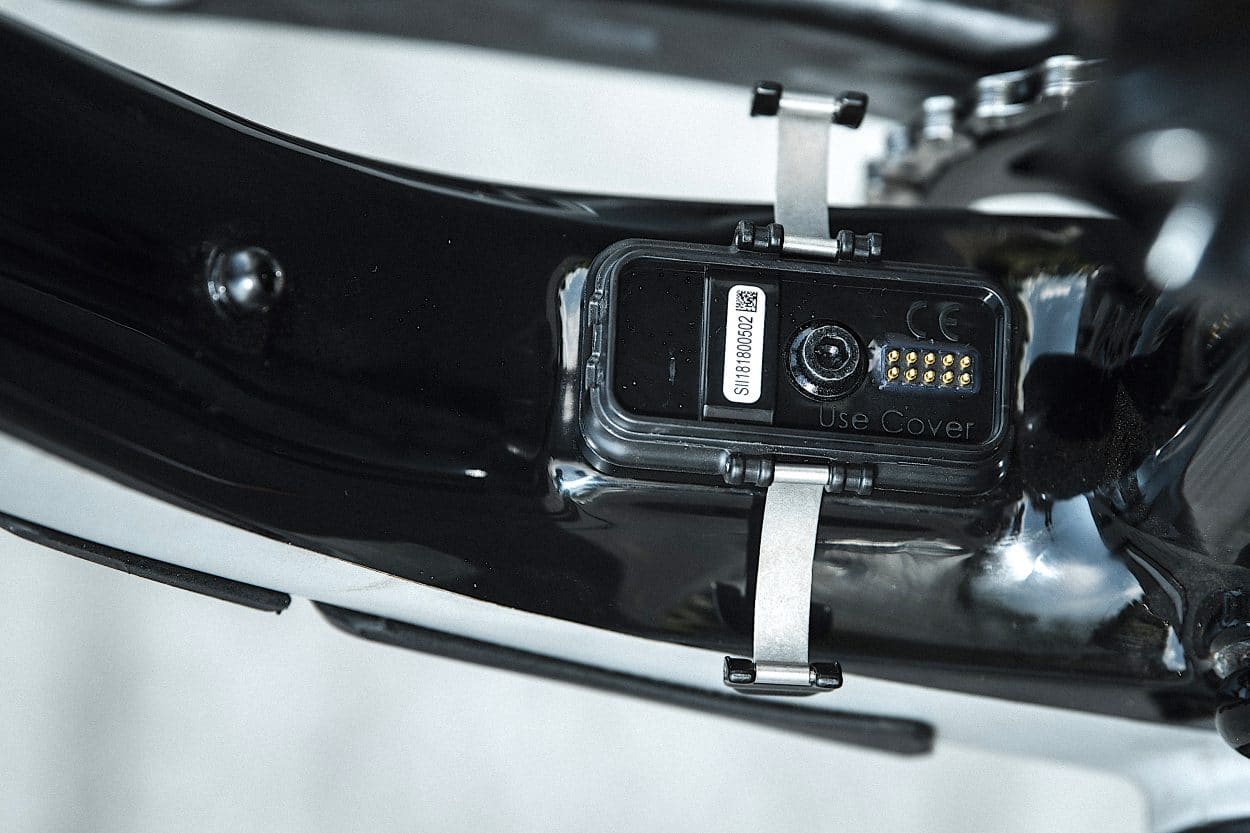 HOW IS IT PROGRAMMED?

Fox offers a PC tool, or basically a computer program, that is available to product managers at the OEM level to set up their bikes with the settings that they prefer. For now, there is no way to custom tune your suspension aftermarket, but some bike brands are considering running different firmware updates that could easily be uploaded to the Live system.

If you’ve read this far and have been thinking, “This sounds expensive,” you’re right. Aftermarket retro-fitting starts at about $3000 for the Step-Cast 32 Factory fork and matching shock. Fox will offer aftermarket upgrades up to its 36 chassis forks but will stop there for now. Some brands, such as Giant, Scott and Pivot, will be offering certain bikes in their lineup with the Live system, and it will add about $2000 to the price tag. The bike that we have been testing, the Giant Anthem Advanced 29er 0, retails for $11,500 with the whole Fox Live Valve system.

WHAT DOESN’T IT DO?

We’ve talked about everything that Fox Live does, but there are a couple of things it doesn’t do. The system doesn’t provide specific feedback on how you can change your suspension settings (like ShockWiz). We talked with Fox about this, and they had discussed the idea, but the system would have required an entirely new algo- rithm and would have drastically delayed getting this product to market. That is not to say it won’t happen in the future, though. 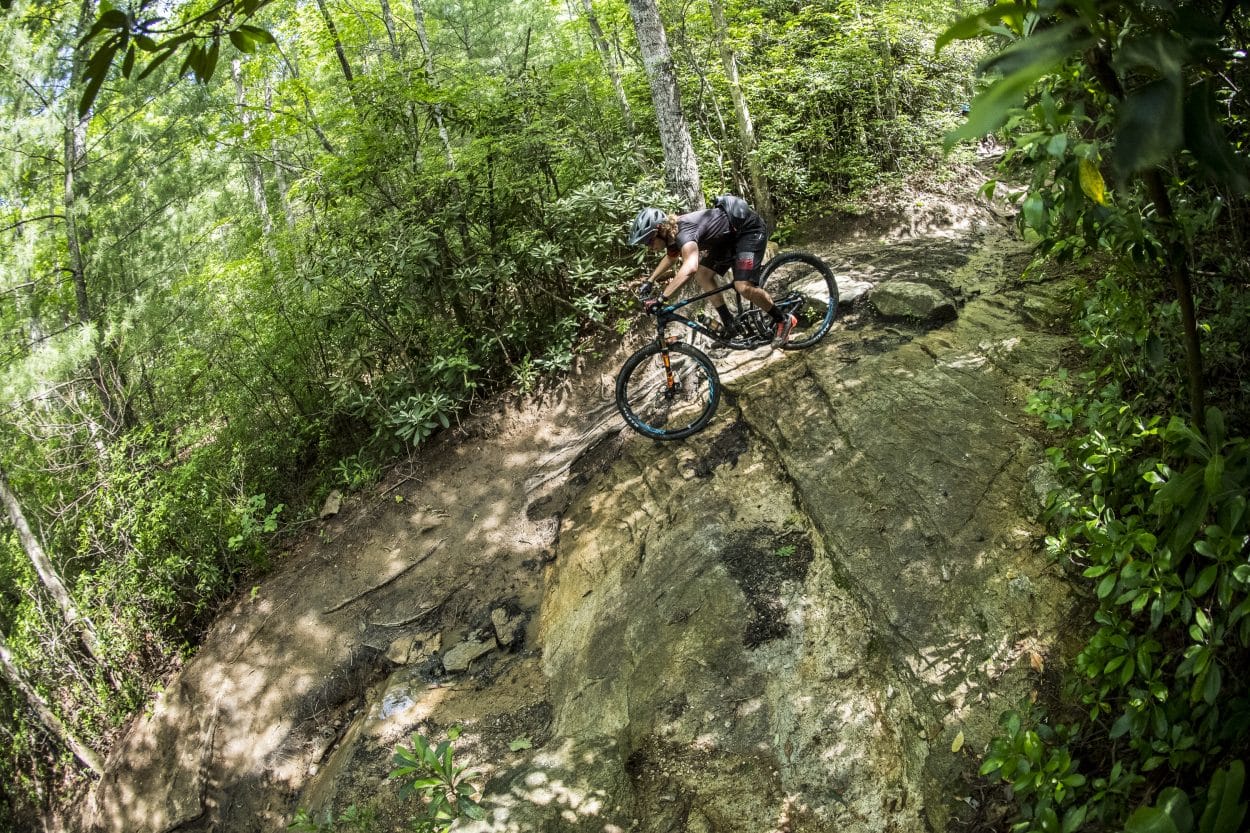 After an extensive product presentation and getting a massive education on solenoids, it was time for us to finally get out and try the Fox Live Valve. Giant and Fox teamed up to provide us with an Anthem Advanced 29 with the system installed. At first glance the shock and all the wiring looked a little less sleek than we had originally imagined. But, one of the bonuses was how clean the handlebars were. We had our brake levers, shifter lever and dropper remote. Ditching the suspension remote drastically increased the real estate on the bars. Live has five bump-sensitivity levels, with 1 being the softest. Each level has a specific tune that gets more regressive. We tested the Anthem Advanced last summer when it first came out and were very familiar with the suspension feel. This gave us a solid baseline to compare the Live Valve in the short and long term. The sag setting was the same for the shock, along with the rebound setting. The Step-Cast 32 fork used the same sag as a non-Live version and even offered the same amount of low-speed compression adjustment but required the use of a 3mm Allen wrench. After dialing in the suspension, we turned on the Live Valve system and put it in the softest setting for our first ride.

It’s hard to describe Live Valve other than it’s something that you don’t really notice. That’s largely because it’s doing a really good job. Hitting our first climb, the suspension was stiff, even when pedaling out of the saddle, but when met with a root or rock, the system instantly responded and opened up. Instead of feeling like we were diving into the travel when the suspension opened on technical climbs, the valve would close almost as quickly as it opened and return to its firmer setting. We were surprised at just how seamlessly the system worked on climbs, even with awkward and technical transitions. On the descents, the suspension was active and transitioned comfortably.

Fox did allow us to do some custom tuning to the algorithm on our bike, and we will be making some long-
term changes to see how the system responds. In our first couple months of testing, the Fox Live Valve has proven to be a very well-designed and executed system. www.ridefox.com