A few days before the second cross-country World Cup race of the year, France’s Julien Absalon announced his retirement from professional mountain bike racing, due to worsening—pollen allergies.

“I’ve been suffering from allergies to pollen in the south of France for the past three years, mostly at the start of the season,” Absalon said, according to an Agence France-Presse translation. “The doctor told me it would only get worse.”

Although Absalon could have taken drugs to treat the problem, such medications can be considered performance-enhancing drugs. They require a therapeutic use exemption (TUE) for those racers who need to take them for medical reasons. Absalon said that he didn’t like taking medications, so he decided to retire from racing and devote his attention to his new team, Absolute Absalon, which he and his business partners founded earlier this year. Absalon said on his Instagram page: “I decided to stop my XCO career. I’m now focused on the management of the Absolute Absalon team and with my ambassador role for my partners.”

Absalon had talked about retiring a few times in recent years, but he kept winning major events and titles, including the 2016 World Cup title. With each round of renewed success, he found the determination to return to the circuit and race again. Now, with his official retirement, Absalon leaves a record that is unequaled by anyone else in the history of the sport.

Absalon won 33 UCI World Cup races in the Elite Men’s cross-country division. His first such win was in 2001 in Durango, Colorado. He was still young enough to be eligible to race in the U23 division, but he had chosen to move up to race against the Elite Men instead. (He did, however, race in the U23 division at the World Championships that same year, and he won that title also.) Julien’s last World Cup victory was in Vallnord, Andorra, which was the final race of the 2016 World Cup season.

After winning his seventh overall World Cup series in 2016, Absalon failed to win a single World Cup race in 2017. What’s more, with his ever-worsening allergy problems, Absalon finished 2017 ranked outside the top five. Absalon raced the first World Cup of 2018 in Stellenbosch, South Africa, and ended up 41st in that race, a result that likely helped him decide that it was time to retire after all.

“I became junior world champion in Mont-Sainte-Anne in ’98 just a few weeks after winning the European championships. That was the first time I thought, ‘Maybe I can make a career out of cycling.’ Before that, I never thought about turning pro. Although I started cycling pretty late in my life, everything came to me really quickly and naturally. My parents had no cycling background, and I had no idea how it all worked. But after just a few months of training, I finished fourth at the French National Championships. Many national podiums followed, but I never managed to pin a win. As a consequence, I was not selected for the 1997 World Championships (first-year junior). But after that I won the French Cup at Roc d’Azur, and the following year, in 1998, I won everything. I kept studying for a couple of years after that and finally turned pro with Bianchi in 2001.” 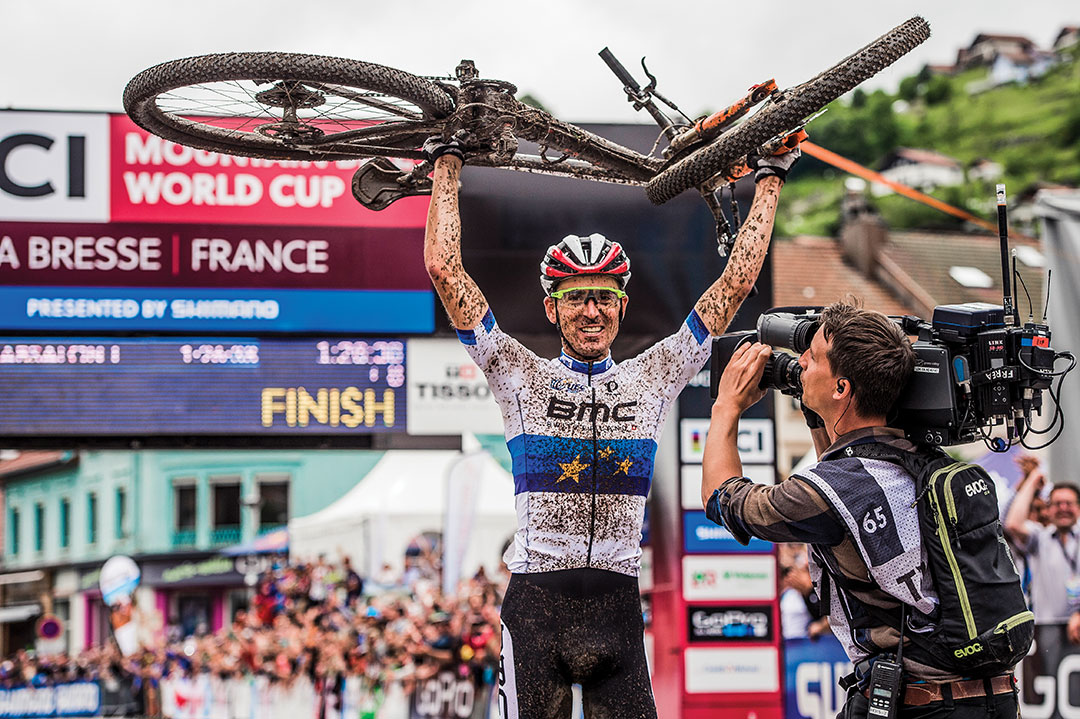 On his first World Cup win in Durango, Colorado, 2001:

“I was in my second U23 season. It came as a surprise, as I had never achieved a podium or a top five before. I was lucky that day! Roland Green was dominating but had two or three flat tires. I passed him many times, but he always caught me again. In the last lap I was second behind Cadel Evans, but he also had a flat tire, and I passed him with 400 meters to the finish line. It was a lot of luck and a real surprise to win in the end.”

From an interview with Canadian Cyclist last August:

“I posted a photo in my social media with my bike from 1998 and the bike I used this weekend. It’s really different, and it is interesting to see the evolution of the mountain bike. We were riding with hardtail, 26-inch wheels, no disc brakes. I came late to the 29-inch from 26-inch, but I am always one of the first to try different things. I was the first rider to use a single chainring, the first to use a dropper seatpost. I was also one of the first riders to ride [Shimano] Di2 electronic shifters. I’m proud of that. As riders, we try to win races, but we also work on the technology with the engineers to try new things. If we like these new technologies, they will come to the commercial market.”