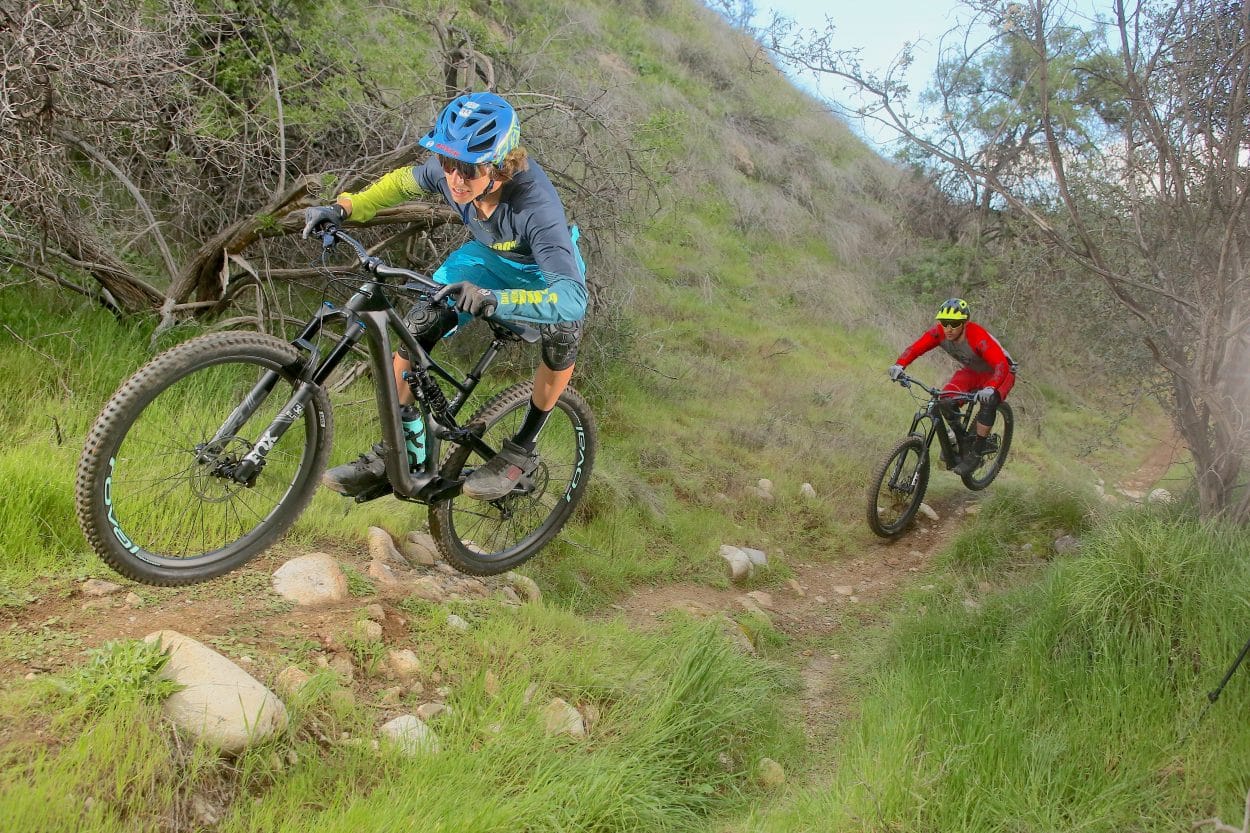 Wheel-size battle: We put the two new Stumpjumper EVO Pro Carbon models head to head. Read on to find out which one we liked best.

We caught our first glimpse of the Stumpjumper EVO last year at Crankworx, Whistler. In fact, we even had the chance to ride the aluminum shredder in its 29-inch-wheel platform down Whistler’s finest trails. It came as a surprise that a bike with travel numbers in the trail bike range and a geometry closely related to a downhill bike’s could be an absolute blast on jump trails like A-Line or rockier ones like Monkey Hands. Although we never pedaled this bike to the top of the mountain, thanks to a lazy man’s ski lift, the EVO showcased the ability to be a versatile shredder over a wide variety of trails.

We were wondering whether or not Specialized would take this aluminum shredder to the next level with a carbon frame. Then we received a call from Specialized excited to break the news that they would be doing just that. After a few minutes, we schmoozed our way into having not one but two brand-new Stumpjumper EVO Pro Carbon frames shipped to our door. Why two? Well, the truth is, we just couldn’t decide between 29-inch and 27.5-inch wheels. We’re sure this is a problem among many of our readers as well, so we did the dirty work of riding lap after lap in order to tell you the difference between these two very shred-worthy machines. 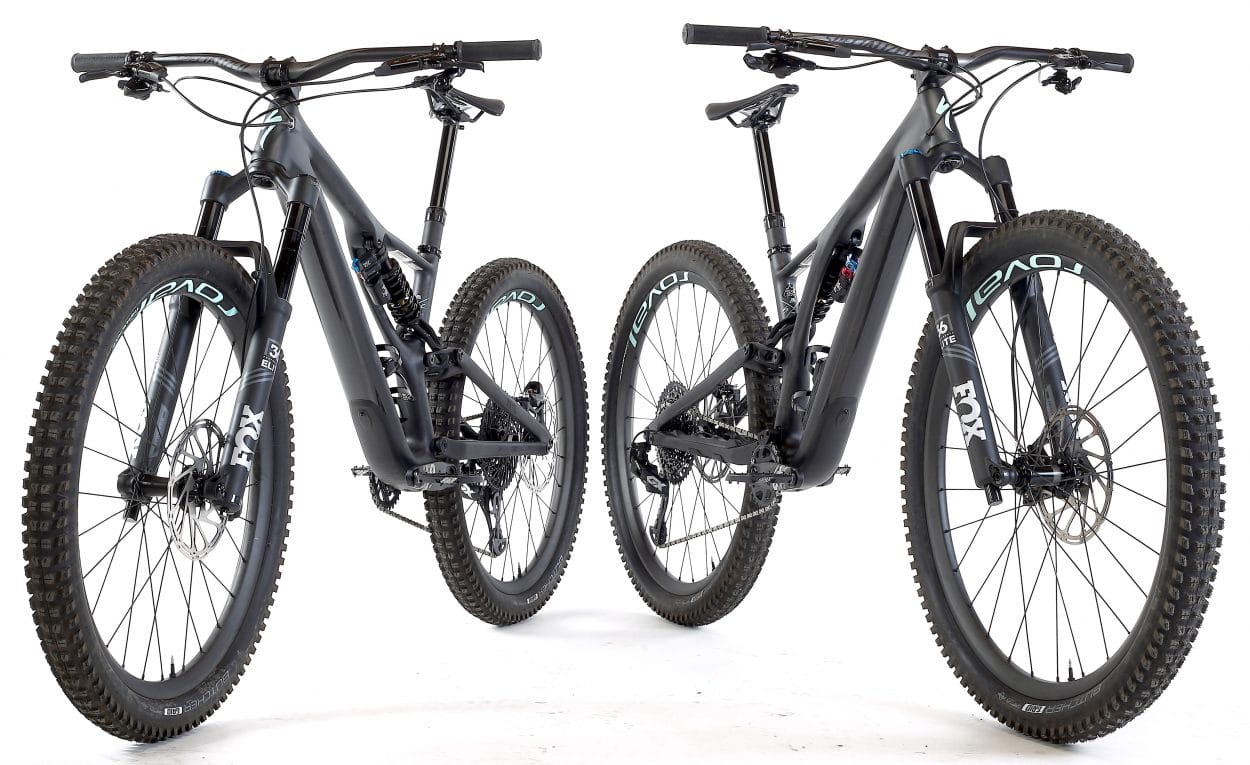 At a quick glance, the two bikes are almost identical, although there are subtle differences that set them apart. Let’s start with the similarities. Both frames feature geometry that is identical to the aluminum models of last year but received a full FACT 11m carbon frame complete with a SWAT storage box in the downtube. The bikes feature a super-slack, 63.5-degree head-tube angle in the low geometry position and a steep 76-degree seat tube angle. These angles are adjustable around a 1/2 degree between the two high and low settings. 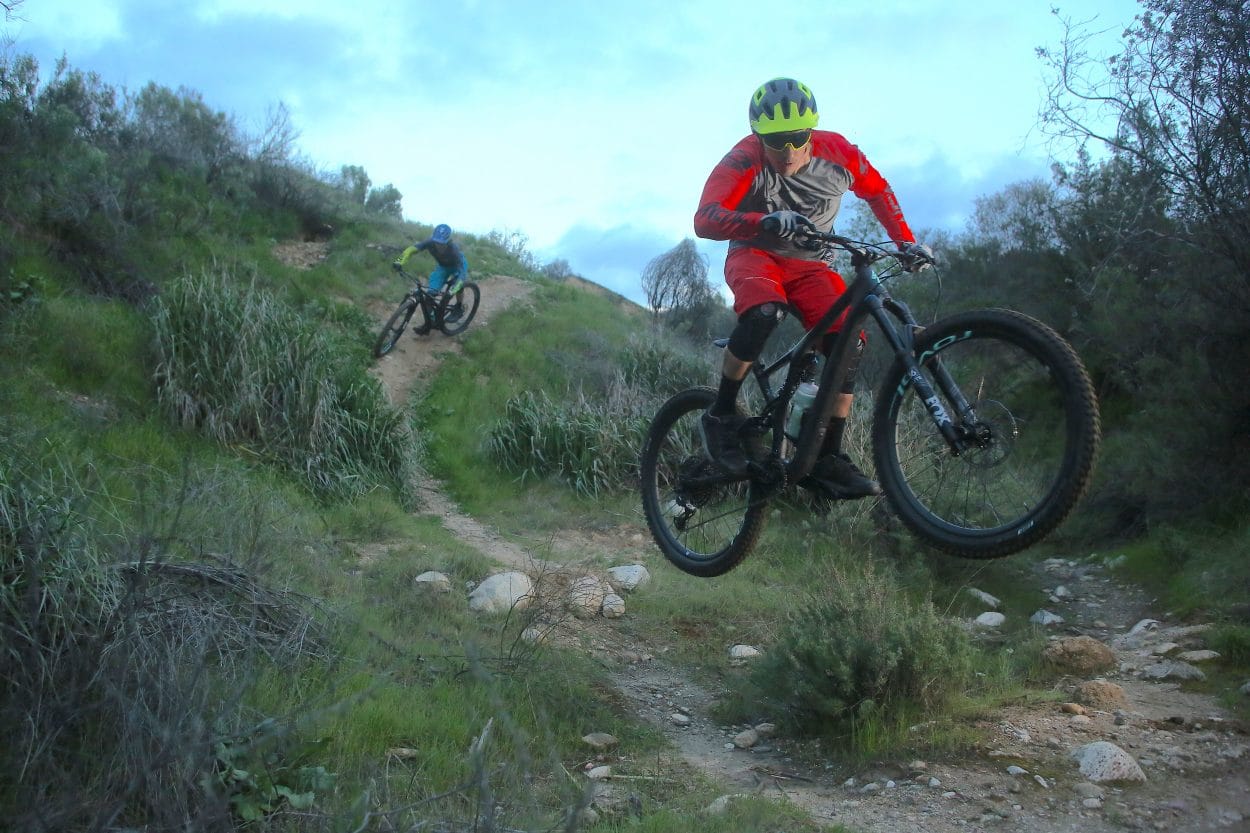 Now this is where the frames began to differ. One of the more notable changes is that the 27.5-inch model has an additional 10mm of travel in the rear end, giving it 150mm of trail-chewing suspension. The smaller-wheeled model also features an additional 20mm of reach in an effort to increase stability at high speeds. Due to the smaller wheels, the 27.5-inch bike has a slightly lower bottom bracket height, giving the two bikes around a 4mm difference. Chainstay length is around 3mm shorter on the 27.5-inch model as well. The standover height is nearly identical and is relatively low.

It’s important to note the unique sizing of these frames. Specialized only offers two sizes: S2 and S3. Think of these sizes as long and extra long. We opted for the S2 frames, which feel similar in size to a medium/large bike, while the S3 size feels more like a large/extra-large frame. Riders on the taller or shorter side may want to give one a spin before opting to buy. 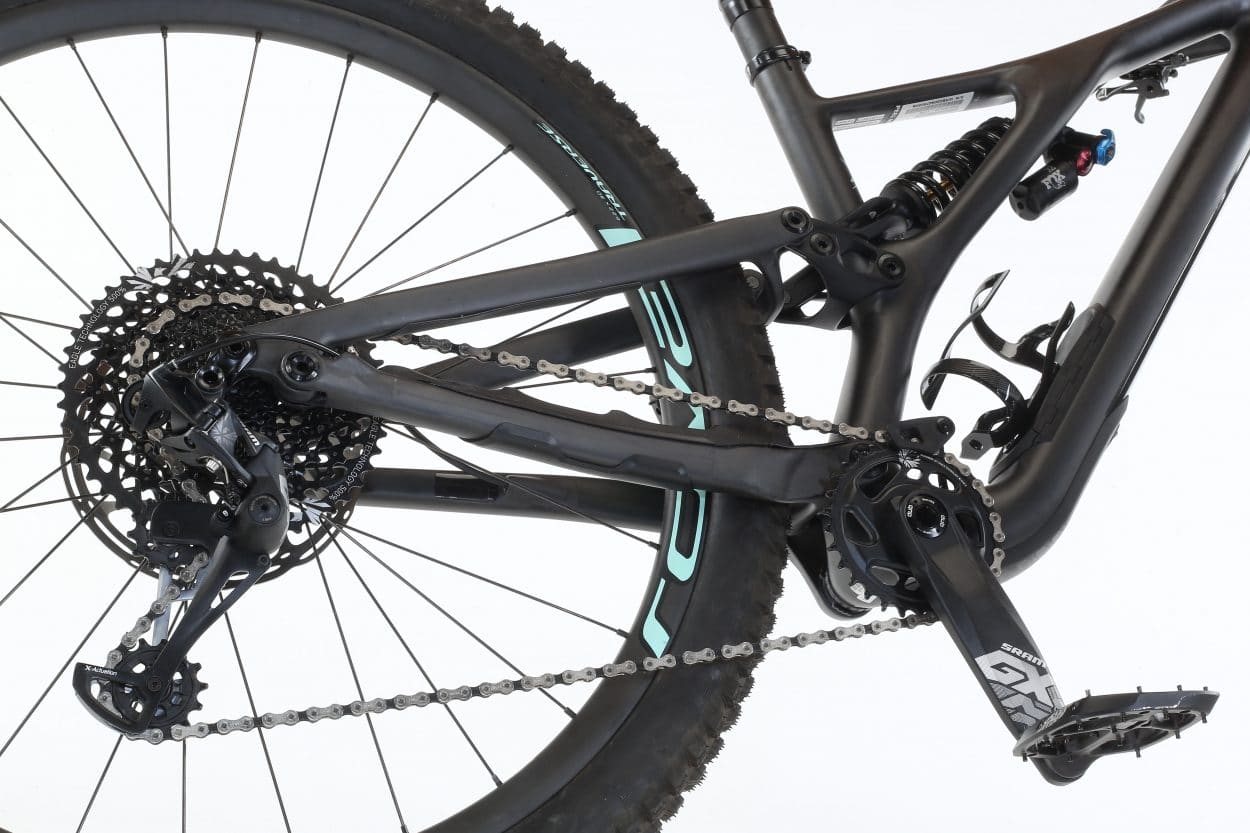 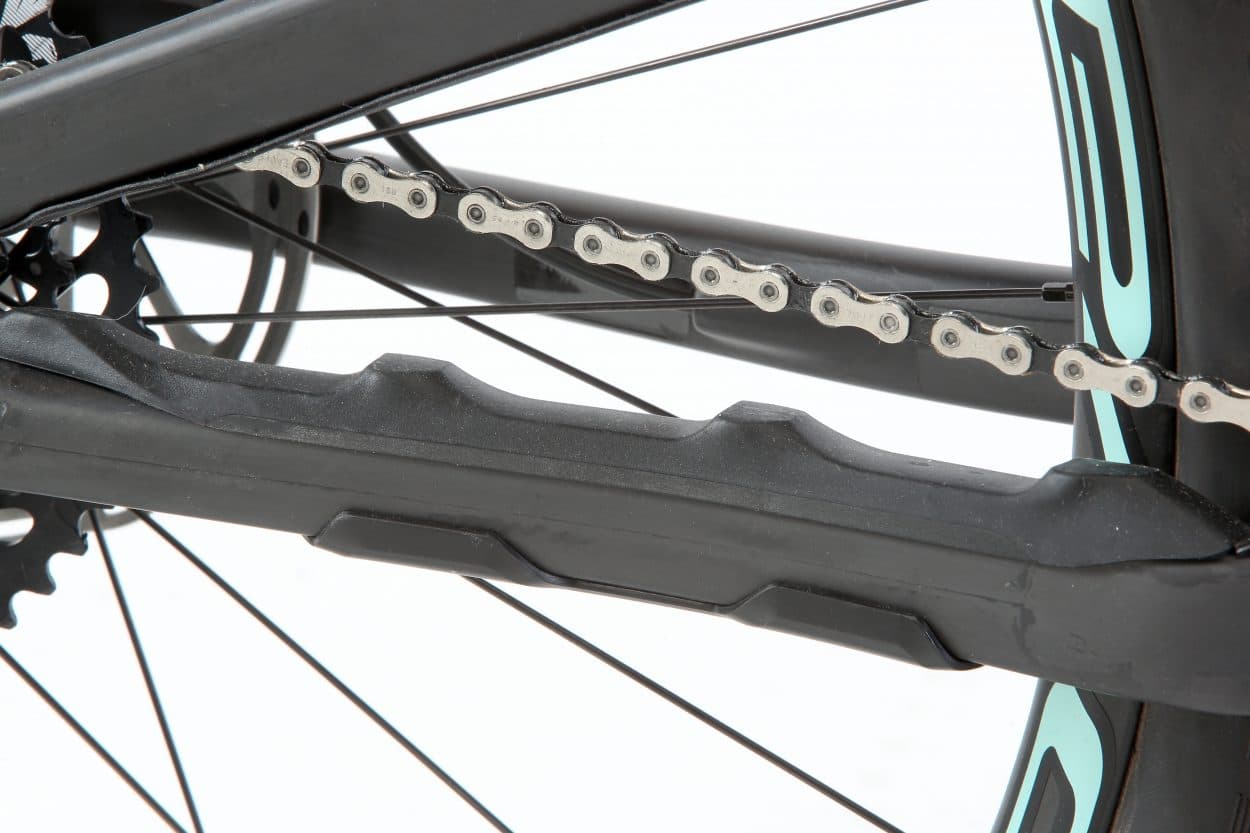 The chainstay guard was designed to reduce noise from chain slap.

Digging through the component spec, you’ll find nearly identical build kits on these two models—other than slight differences in chainring size, fork offset and, of course, wheel size. Both bikes feature Fox suspension, a SRAM 12-speed drivetrain and a list of Roval components. 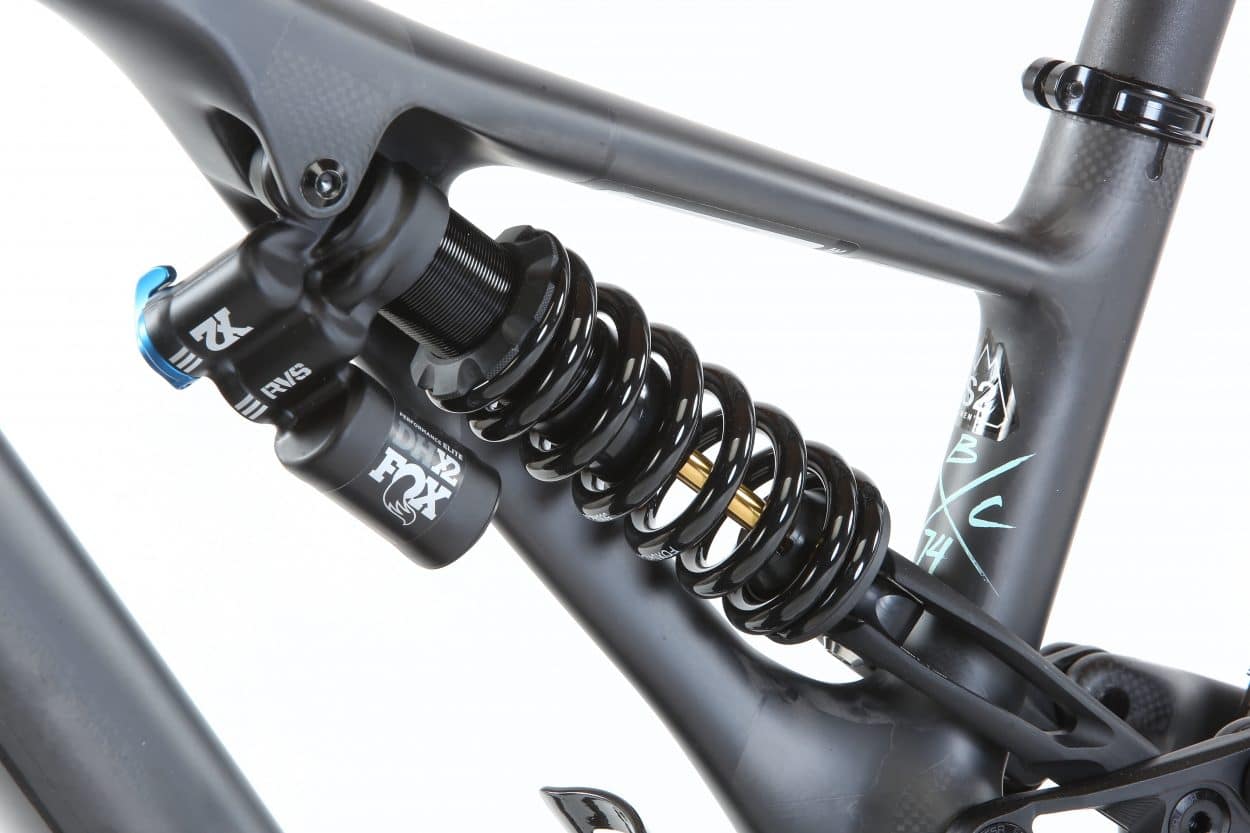 The bikes roll on Specialized 2.6-inch-wide tires wrapped around 30mm inner-width Roval rims. They also both feature 200mm brake rotors front and rear. The four-piston SRAM Code RSC brakes were a standout feature on both of these bikes, offering loads of stopping power when needed. Another notable feature was the Fox DHX2 coil shock with a two-position lever. 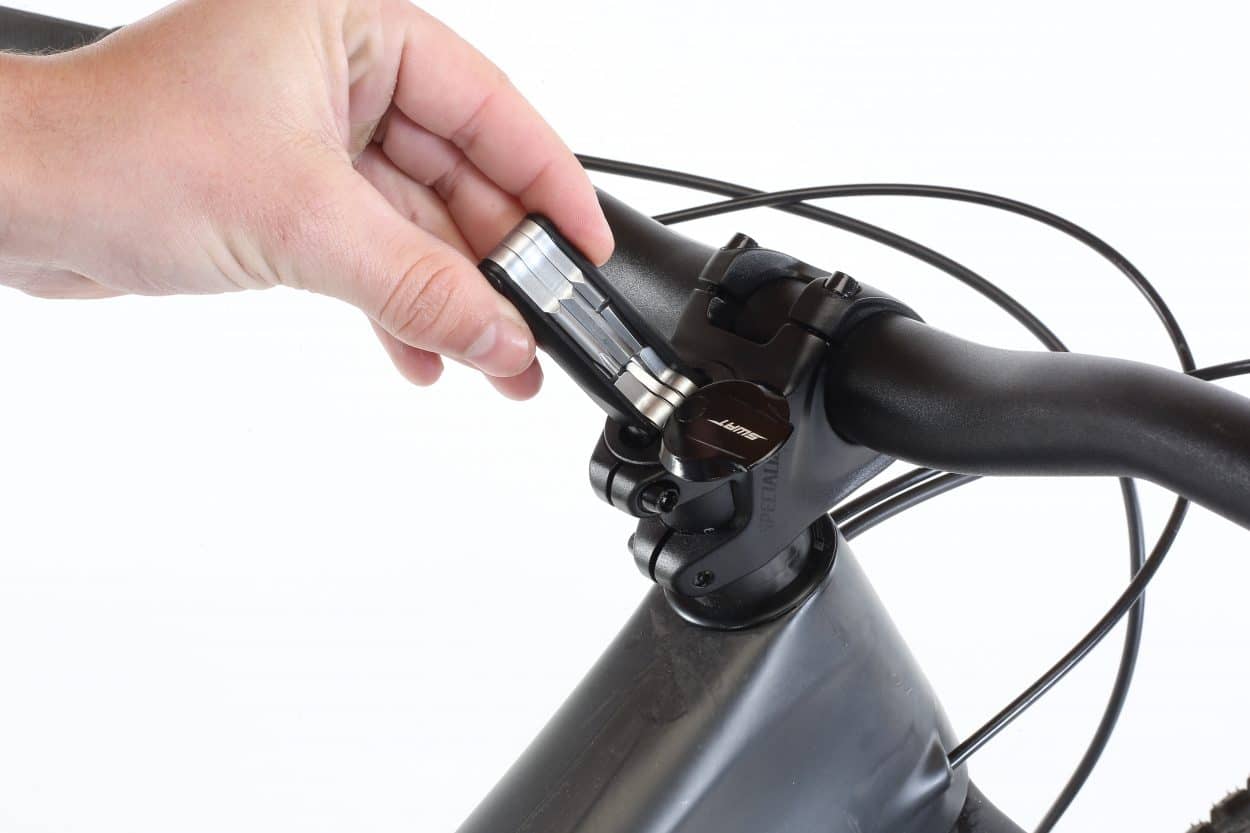 A Swat multi-tool is a nice touch.

This design allows a rider to stiffen the rear shock in order to tackle long climbs. Specialized then opted to use its own dropper post on these bikes, which offers 16 set positions and 160mm of travel. The Specialized Command Post is one of the fastest returning posts on the market, which could be a pro or con depending on your preference.

With a coil shock and a Fox 36 fork, this Stumpjumper is clearly designed to slay the descents. The bike is designed around Specialized’s FSR suspension platform and received an in-house RX Trail Tune to ensure big-hit performance while retaining the ability to earn its turns. 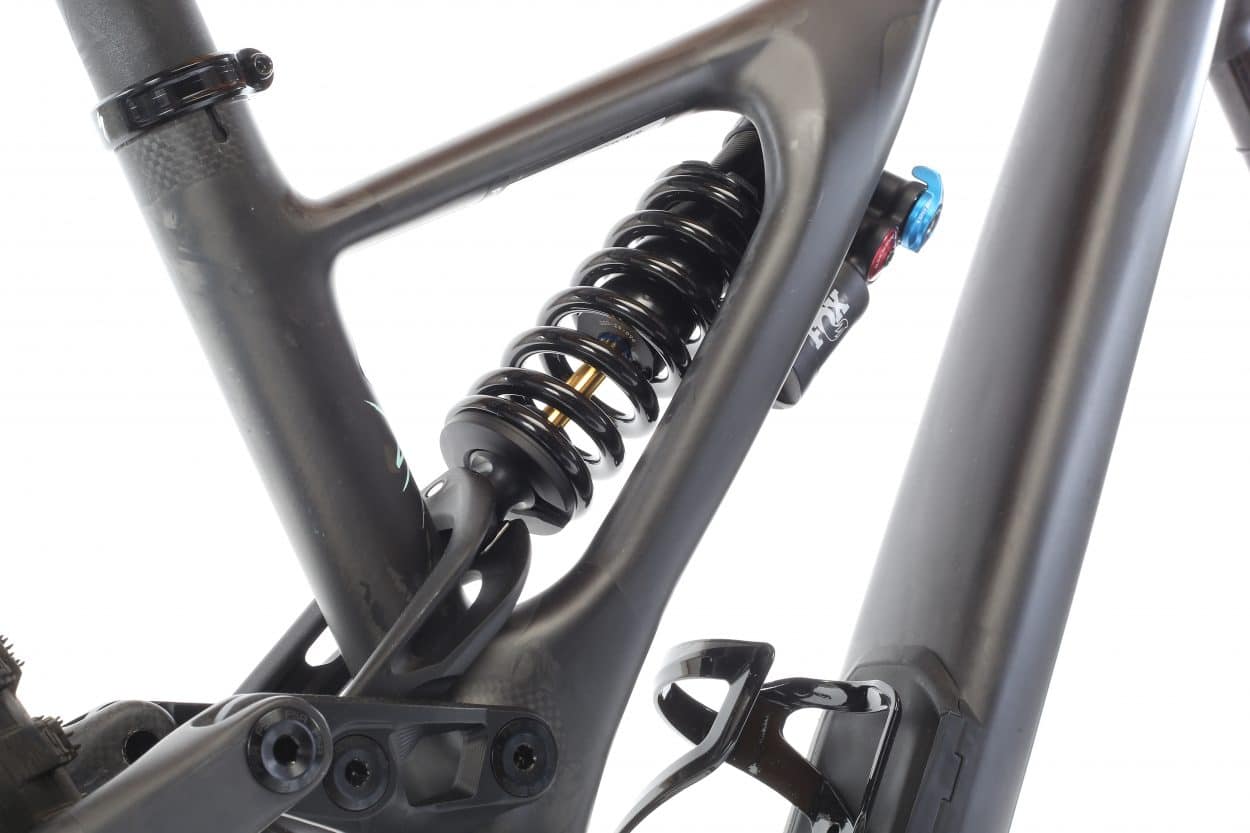 Setting sag requires a slightly different process than one would use when setting up an air shock. Start by measuring the eye-to-eye length of the shock with no weight on the bike. Then sit on the bike with all your gear and have a friend measure the eye-toeye length again. The difference between those two measurements is your sag. To increase sag, turn the spring counter-clockwise. To decrease sag, turn it clockwise. A heavier or lighter-weight spring may be needed to meet Fox’s recommended starting point of 30-percent sag.

We stuck with the 500-pound spring throughout our testing but would have liked to try a heavier spring in the 550- to 600-pound range. This demand came from our more aggressive testers who enjoy jumping to the moon and landing to flat. Our other testers enjoyed the suppleness of the 500-pound spring over rockier trails. 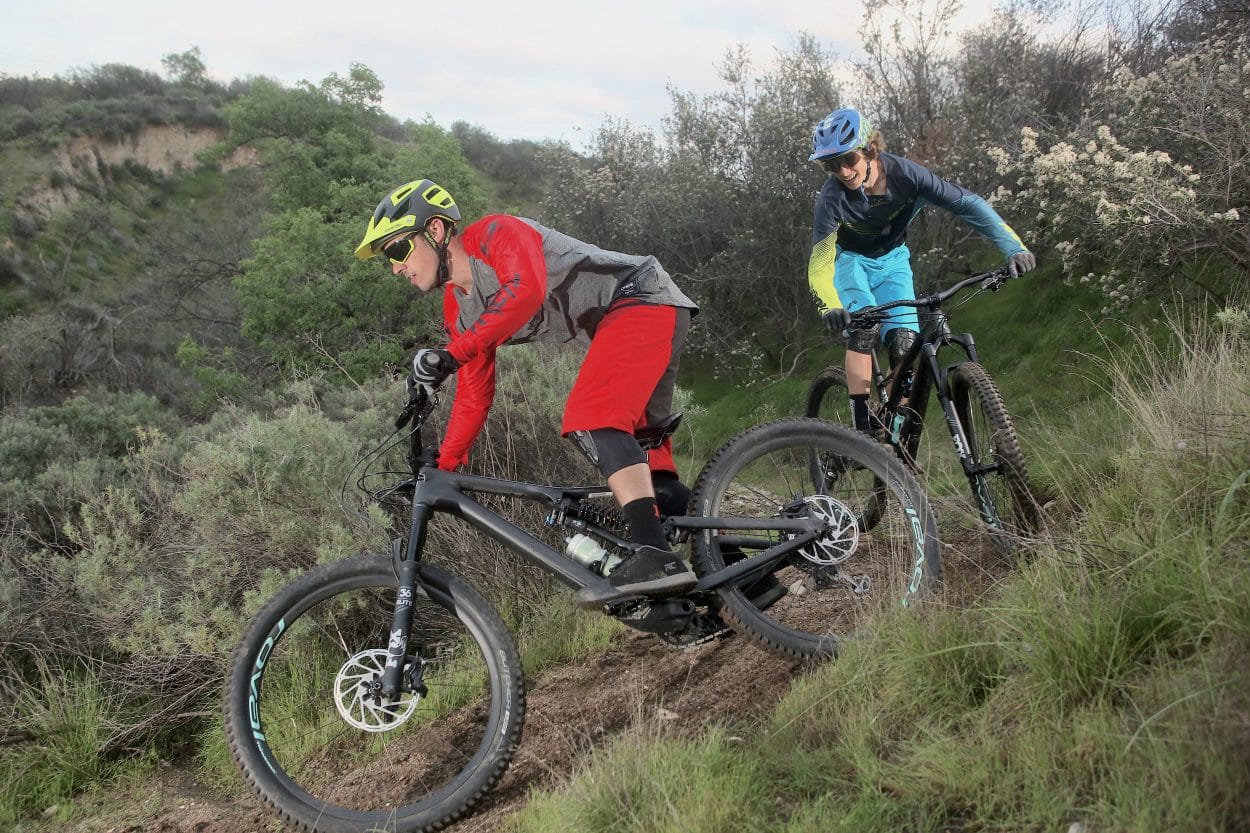 The 27.5-inch model has the edge in cornering speed, while the 29er reigns supreme on the straightaways.

Climbing: As we climbed up the trails eager to fly back down, we kept telling ourselves, “All things considered….” While we’re not going to sit here and tell you that this bike beast-modes its way up the climbs, we can say, all things considered, this bike climbs surprisingly well. Just one look at this bike’s geometry had us wondering if our climb would be better attempted in the bed of a truck, but what kind of testers would we be if we took the easy way out?

Comparing these two machines on the climbs, we would give a slight edge to the 29er; however, when quick acceleration was required, the 27.5-inch wheel was easier to spin up to speed. The reason the 29er climbed a bit better is likely due to its reduced travel and smaller front chainring. We also appreciated the 29er’s slightly taller bottom-bracket height; however, throughout our testing, we suffered many pedal strikes with both bikes.

There is a small difference between the two models, and it prompted a long conversation as to which bike we liked better; but, at the end of the day, regardless of which wheel size we rode, our work was cut out for us on the climbs. We can’t thank Fox enough for the added compression lever, which takes some of the pain out of those long and steady ascents. 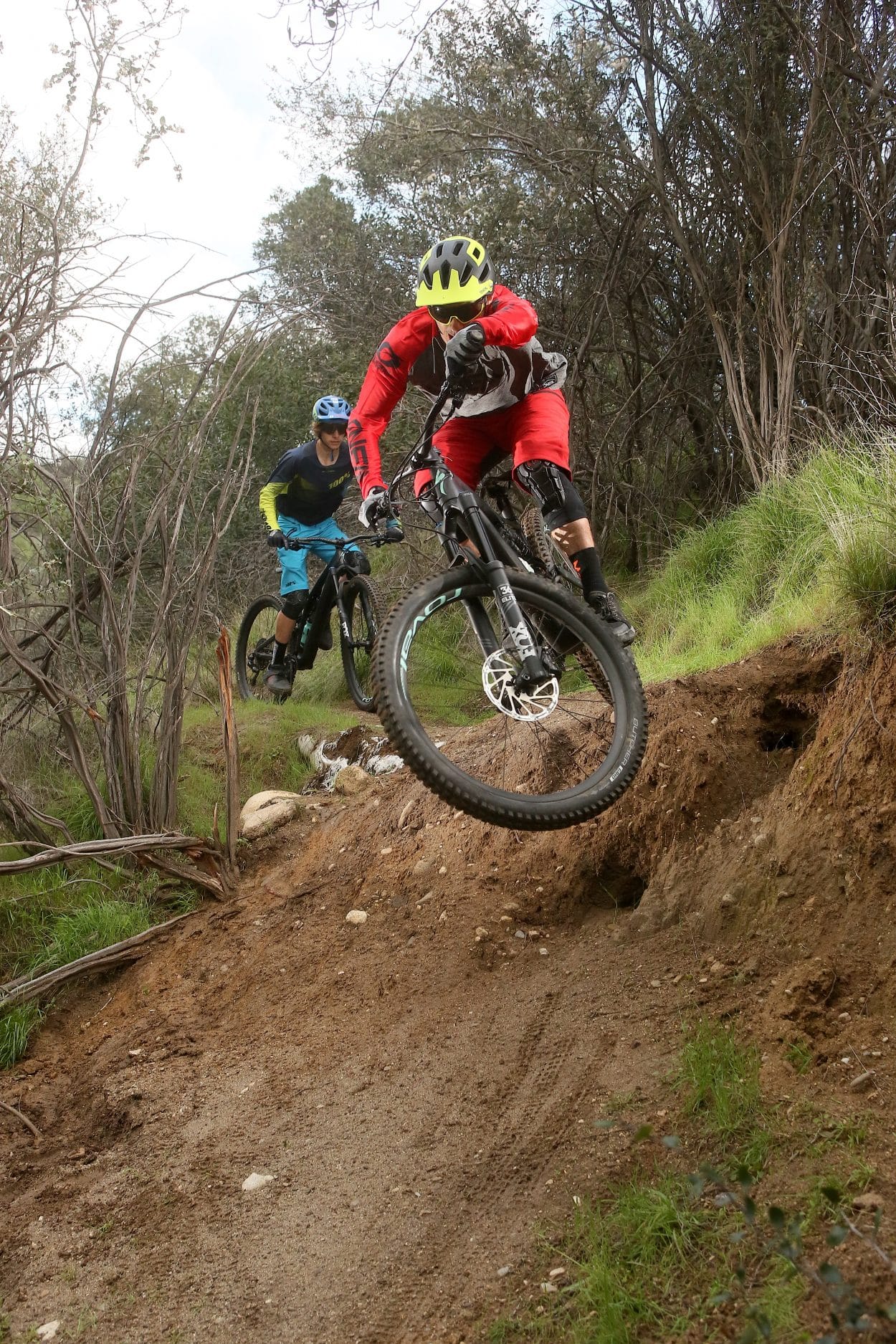 Specialized describes these bikes as “rowdy,” and we couldn’t agree more. When the trails point down, the EVOs go to work transforming gnarly trails into welcome challenges. Both bikes eat up rocks and roots with ease, providing the utmost confidence when the trails get steep and features get bigger. The EVOs beg to be ridden down steep terrain and tend to get restless with anything less. You have to shred these bikes hard to reap their full potential, and once you think you’ve reached it, you just have to keep pushing harder. Luckily, both bikes do an excellent job of correcting rider mistakes and continue flying down the trails as if nothing happened. The coil shock offers a glued-to-the-ground feel unlike any air shock can offer. This is especially noticeable when flying into a corner; these bikes just sit in the turn and power out the other side. 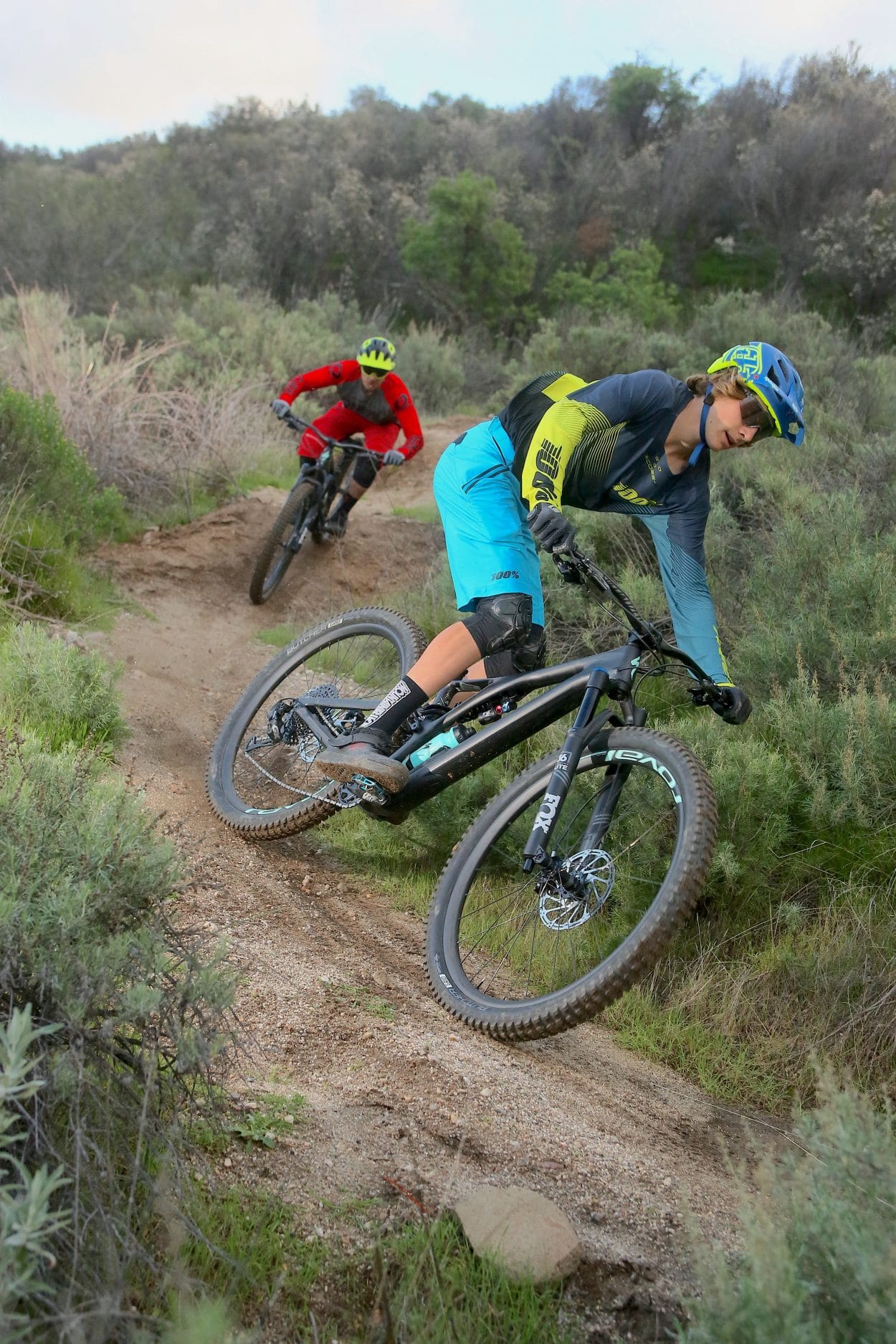 So, what’s the difference between these two shredders? Well, it was no surprise that the smaller wheels offered a slightly snappier feel, while the taller wheels rolled over obstacles more easily. The 27.5-inch model tended to have a “poppier” feel to it, while the 29er tended to glue itself to the ground. Both bikes slash corners incredibly well and easily allow a rider to slap the rear end around turns. The 27.5-inch model seemed to do so with a bit more alacrity, but the 29er is not limited in any way. Our testers noticed the difference immediately between the wheel sizes but had a tough time choosing one over the other. 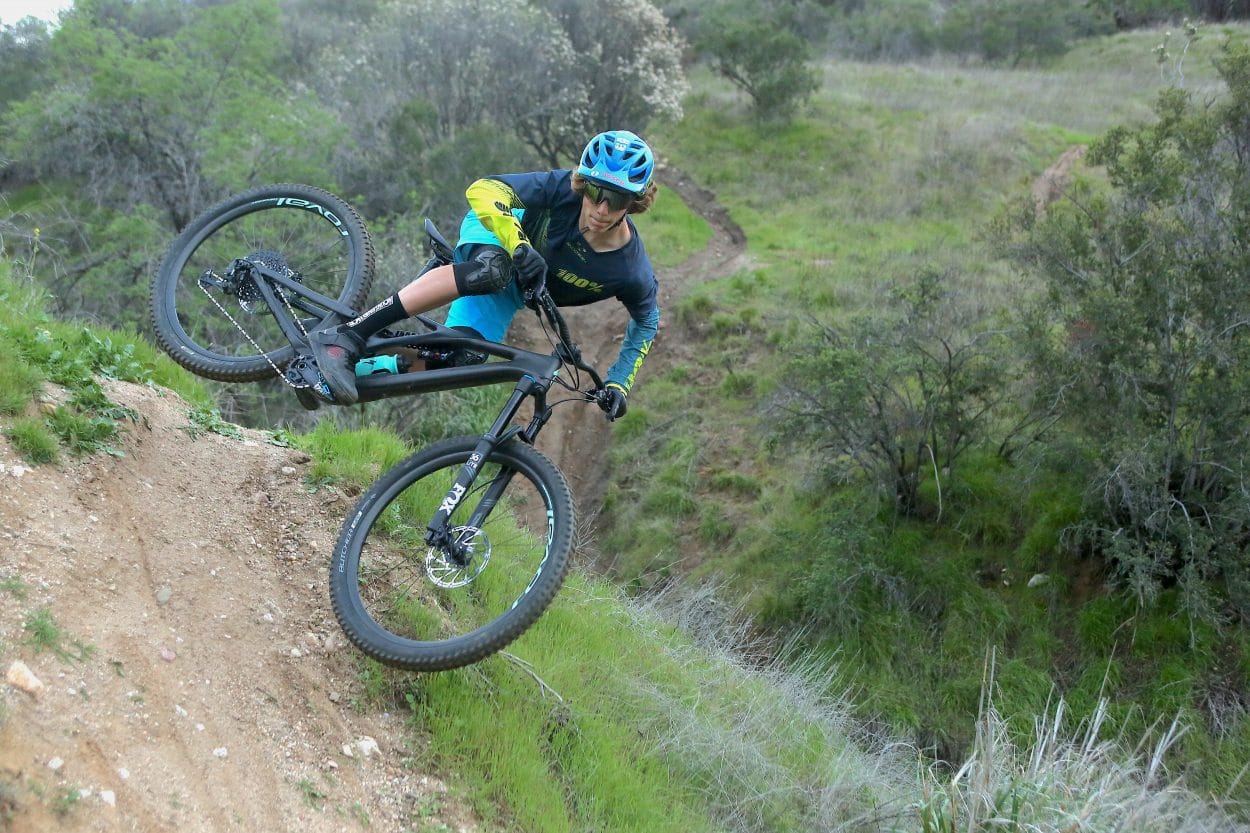 The difference in reach contributed to the unique feel of these bikes. Since the 29er is a bit shorter, you tend to feel more on top of the bike, giving it an enduro feel, while the 27.5er tends to offer more of a downhill-bike feel. When hitting bigger drops and jumps, the extra 10mm of travel on the 27.5-inch model provided extra resistance to bottoming out, giving it an edge for riders looking to “huck” their way down the trail. Meanwhile, the 29er blasted down the trails with speed and precision. 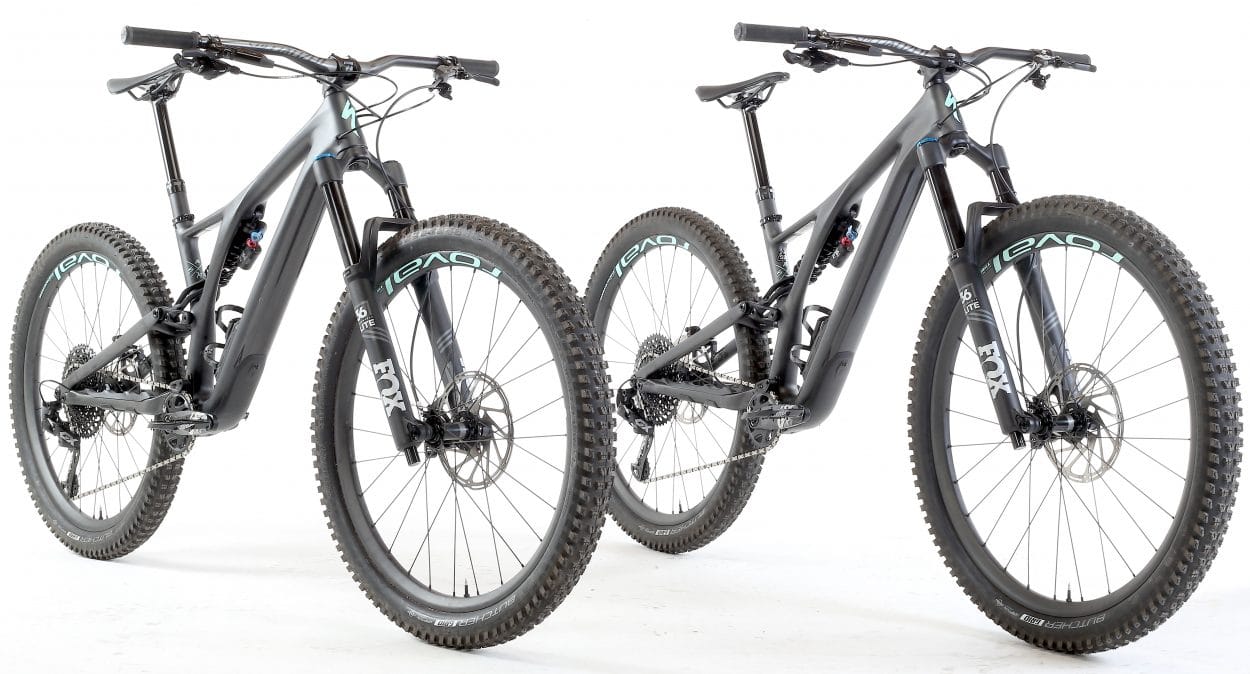 These bikes were obviously spec’d by a shredder with the right priorities. The suspension is dialed, although some riders wanted a heavier spring, and the brakes are topnotch. The drivetrain offers a wide range of gearing and shifted smoothly but is not so expensive that you’ll be bummed if you bust up your derailleur in a crash. The rims are stiff, and the cockpit is wide. Other than minor personal touches, you won’t need to change a thing. That said, one of our taller riders noticed the Sensus grips spec’ed on our test bikes seemed narrower than other Sensus grips we’ve ridden with. He would choose a wider grip to better fit his hands. 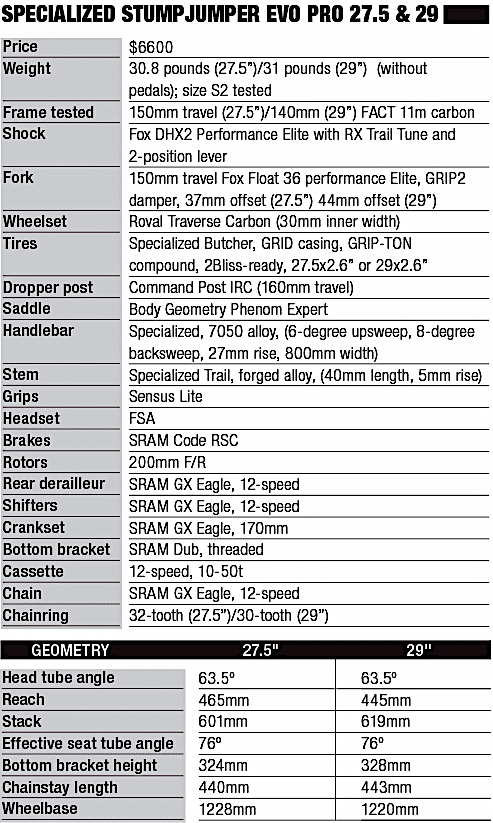 Unfortunately, we can only pick one model to be crowned the winner. This was not an easy task by any means, as both bikes shred hard. On one hand, the 29er tended to climb a bit better and rolled down the trail at top speed. On the other, the 27.5er gave us the freedom to more easily toss this bike around and get rowdy over aggressive trails. Of course, it’s important to first note what type of rider these bikes are built for. With travel numbers in the 140- to 150mm range, you might be tempted to assume these bikes are trail machines, which couldn’t be further from the truth. The ultra-aggressive geometry of these two bikes will appeal to the rider who makes his way up the climbs, straps on gear and races to the bottom at Mach speed. It’s a matter of personal preference, but if we had to choose only one of these bikes, the 27.5-inch model would be our go to option. It surprised us, as we thought the 29er would be a clear winner. While it’s an excellent bike for ripping down the trails, the smaller wheels of the 27.5 just made our ride more fun. We easily could have debated back and forth on this topic forever, but at the end of the day, only one bike can be victorious. www.specialized.com

Am I A Fat Biker?