What a weekend! The racing season is now careening towards its mid point with only three events remaining in the series. Last weekend 990 interscholastic student athletes and their families braved the super-bloom traffic and made the trek out to one of the League’s long time favorite venues, Vail Lake, for race number two.

It’s been known since early on that Vail Lake is host to a sort of micro-climate where-in it always seems to be windy, hot, or both and last weekend was no exception. Temperatures climbed to over ninety early on but after months of riding in the cold everyone seemed pretty ecstatic about spending the holiday weekend glazed in sunblock. Turnout in fact was the largest we have ever seen at the venue and in many places such as Air Force Hill there was at times almost no more room for spectating. The venue just felt full to the brim, teeming with sounds of excitement and laughter that pierced through the drone of whirring trainers and buzzing generators. The pits were bustling with action all weekend long and at a point our GRiT Ambassadors even hosted an Irish Jig.

While the infield felt like a festival the atmosphere on course was a bit more serious. Unlike the Lake Perris course Vail has an abundance of winding single-track which spans rolling hills over terrain of an increased technical magnitude. Pre-ride cued many racers into this fact and as a result we saw plenty of them testing their skills, finding new strategies to move through their fields. This resulted in podium shake ups across many of those fields and in quite a few cases tie-ups or shifts of the Leader Jersey. It’s always exciting to see where the cards fall come race number two as riders begin to learn the strengths and weaknesses of both their opponents and themselves and things are only going to get more interesting as we head towards race number three.

Anyone who has ever been to a SoCal League race knows that there is far more going on than just racing. If you have ever read a race report you probably already know that in past seasons we tended to share only the perspectives and stories of those privileged enough to make it to the top of their fields. This season however we are taking a different approach and trying to capture a bit clearer image of what it’s like to be a part of a SoCal League event. So we’ve asked those in attendance to share stories with us about things they experience on race weekend so that we can share with you. We have decided to name this section “Tales From The Dirt Zone” and we hope to feature around three per race report.

The SoCal League has, since it’s inception, always tried to run a program in which everyone feels like they are valued and appreciated. In our first story this week Corbin Parsley takes us on a play by play of his race while sharing with us a few fantastic examples of how those core values are expressed on race weekend.

After my strong finish at Lake Perris I was amped up to race at Vail Lake. Perris is wide open and not very technical compared to Vail. I also race road bikes, so I understood Perris was about strategy and not getting caught out alone. I knew going in that Vail was going to be a much different race. At the start I was in the middle of the group. I knew that I needed to make my way up to the front. From there it was a race to see who could get to the Tunnel of Love first. I saw two riders trying to sprint to be first into the single-track trail, and I decided, “Hey I want to be right there with them too”. I sprinted up to the leaders and made a move to gap them. I looked back to see if I had a lead on second place before the corner hooked left, and I had about two to four seconds on the pack of riders. When I got around the corner I sprinted once again, trying to open up my lead. I sprinted up the next hill and never looked back again.

When I started the second lap I just decided to keep on riding my own race, taking good lines and carrying my momentum around corners. On the course I kept hearing the crowd of spectators yelling and cheering. It was my first ever break away, and the crowd was pumping me up. It really is cool that everyone cheers on the riders even though we are on different teams. I saw a coach from another team that I know, and he was cheering as hard as anyone else out there.

The third lap came up fast and all I knew was that I just had to bring it home without crashing or making any mistakes. It was a lot different than the sprint finish at Perris.

I have a lot of respect for my competitors, and I have fun racing with them. So far, everyone has kept it clean. When we are not battling bar to bar, there is some pretty good back and forth among us racers. Racing SoCal is much different than racing in other series because of the team element. I want to say how much I appreciate my coaches and my teammates. Speaking of teammates, we have a lot of new riders this year. I was super stoked to hear that three of my teammates finished on the podium for the first time! I can personally tell you that they worked hard to earn their positions on the podium. So, to all of you less experienced racers, keep at it, and have fun while you are doing it.

Often times as a league director the question comes up about what to do with kids who want to play multiple sports with conflicting schedules. Ultimately the answer is very simple; Life is about choices and you simply just can’t do everything. In our next submission Danielle Jacobs shares with us the story of her son Landon who seems to understand that fact very well. It’s wonderful to see our student athletes succeeding on so many levels but it’s truly commendable when they are the ones making the hard choices and then putting in the effort to get them there.

My son Landon Jacobs along side with Emma Timmermans co-founded the El Modena Mountain Bike Team last race season. Spencer Jacobs, then a 7th grader wanted to race but found playing for two baseball teams, travelling out of state for baseball tournaments, having baseball practice five days a week and every weekend tournaments made it impossible for him join. When he could, he rode around with his brother for fun.

During the summer of 2018, he asked if he could join the FootMo team and race Over the Hump. Not having a bike, friends rallied around him to let him ride whatever they could find, sometimes even a small frame for his 5’11” body. He didn’t care, he just wanted to ride while he had baseball down time. One particular race, he lost his pedal and was determined to finish even if it was dead last, he didn’t care. He was determined and the passion grew. That summer he traveled to an out of state tournament to compete for a spot for the US National Team. We returned from that tournament with an offer to play on the US National Team, but mountain biking never left his heart or blood.

This year, he asked if he could focus his baseball career locally with high school only and also mountain bike. That decision absolutely lead him to his second NICA race ever. This past weekend, Saturday he crushed his second race ever by moving up thirteen spots, followed by a Sunday 6am wake up to the field to crush two doubles and four RBI’s for the El Modena High School Baseball feeder team. Fourteen years old and an unstoppable passion to succeed by hard work, motivation, and determination to crush his goals – truly inspiring!

That concludes our Tales From the Dirt Zone for this time around but we would love to hear more of your stories following our future events. Submissions are due the Wednesday after each event and may be sent to [email protected].org along with a photo of your choosing.

May 11-12: Intergalactic Finals at Tehachapi presented by Specialized

The SoCal High School Cycling League was organized in 2008 to provide a well defined race season for high school student-athletes and to promote the formation of teams at public and private high schools. In 2014 that grew to include a middle school program designed to introduce middle school aged riders to the sport of mountain biking focused heavily on skills, fun, fitness, and responsibility with a taste of the competitive aspects of mountain biking. With the cooperation of local race promoters and our sponsors we produce a first class series of races in addition to providing training for coaches and riders. The League is working to make interscholastic racing the easiest way for youth to get involved in the challenging and exciting world of competitive cycling. NICA and the SoCal League exist by virtue of a range of fundraising activities, as well as generous donors, and sponsors including national lead sponsor Trek Bicycles; major sponsors Shimano, Clif, Specialized, Salsa, Giro Podiumwear and QBP; league level sponsors Haro Mountain Bikes, Hyperthreads, Jax Bicycle Center, Jenson USA, and Kenda. 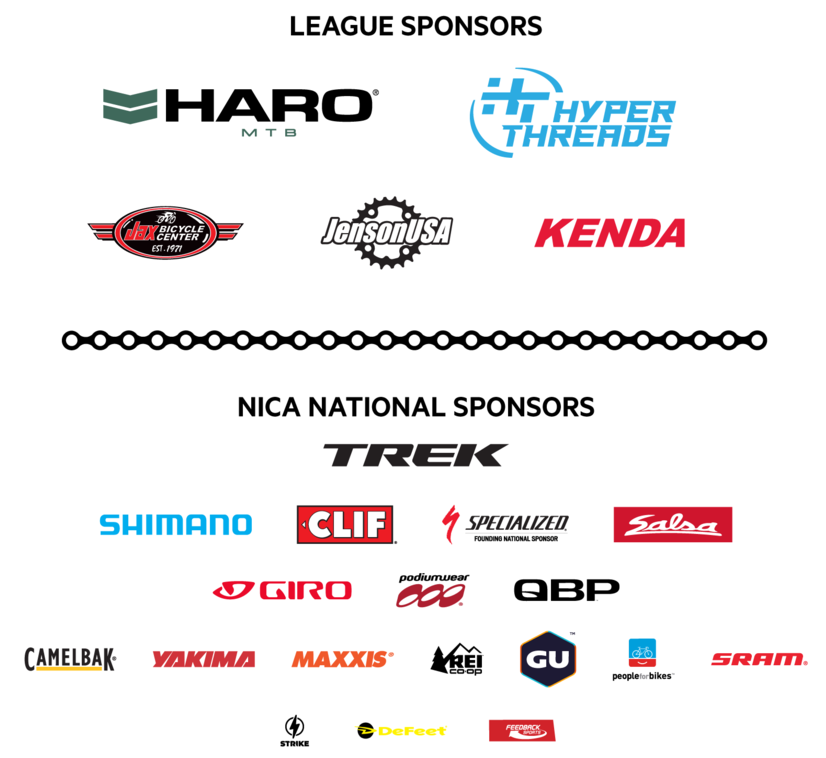