Jeff: I started riding bicycles and motorcycles as a young grom and just really loved anything on two wheels. As I continued to ride, like anyone else in the interest of BMX riding, I had a couple of ramps and a bunnyhop stand to practice with. That graduated to riding on BMX tracks, racing, and working in my local Schwinn shop in the Michigan area where I grew up.

MBA: How did you decide to study mechanical engineering?

Jeff: It was a no-brainer. Have you ever seen the Dilbert cartoon in the press? The kid basically took everything apart and put it together again or fixed things that were broken. That’s what I did as a young kid, from motorcycle engines to full car engines, and my parents were like “go to engineering school kid”—and it was a natural fit.

MBA: When did you get into mountain biking?

Jeff: When I got out of college in 1992, and my first bike was a Cannondale hardtail with a Headshok.

MBA: What was your first job after you earned your engineering degree?

Jeff: I went to work for an automotive seating company. I tried to get a job in the sporting industry, but jobs were less available then. Auto was in the family as my dad was working at Ford when I was in college and got me an internship to get the ball rolling.

MBA: What made you decide to start designing and making your own mountain bikes?

Jeff: I started professionally designing with my first job in auto, as mentioned above. It was not until my second job at an interiors company that I got my groove on and received my first patent. I really like being creative in the area of design, from cars, motorcycles (custom), bicycles and even houses. As far as mountain bikes specifically, I had the idea about 15 or so years earlier when I was in Michigan and had not yet seen the usage of hydroformed tubing in bikes yet (we were using this in Auto already for all kinds of things). At that time, I didn’t feel confident that I had enough experience/know-how to be successful at the challenge. Flash forward 15 years or so, and I was consulting in the bicycle business. I now felt I had the tools to be successful at enough activities that I wouldn’t go down in flames. This combined with poorly performing suspension bikes (at the time, bikes just didn’t have a good capability to descend, climb and brake well) that looked unsightly and cost a lot were enough reasons to motivate me to make a go of it.

MBA: How long did it take to create a bike design that you were happy with?

Jeff: Now that’s a loaded question—this one was hard. I knew what I wanted, but could not get the leverage rate that I wanted. This resulted in an initial linkage design that had extra parts that I wasn’t happy with. I made it anyway but didn’t like it, so I went to Interbike to get inspiration. I came back mad that I couldn’t figure this out more easily, and with a little drag-and-drop functionality of the suspension program, poof, I had it (so long answer was about eight months to get the design I wanted). 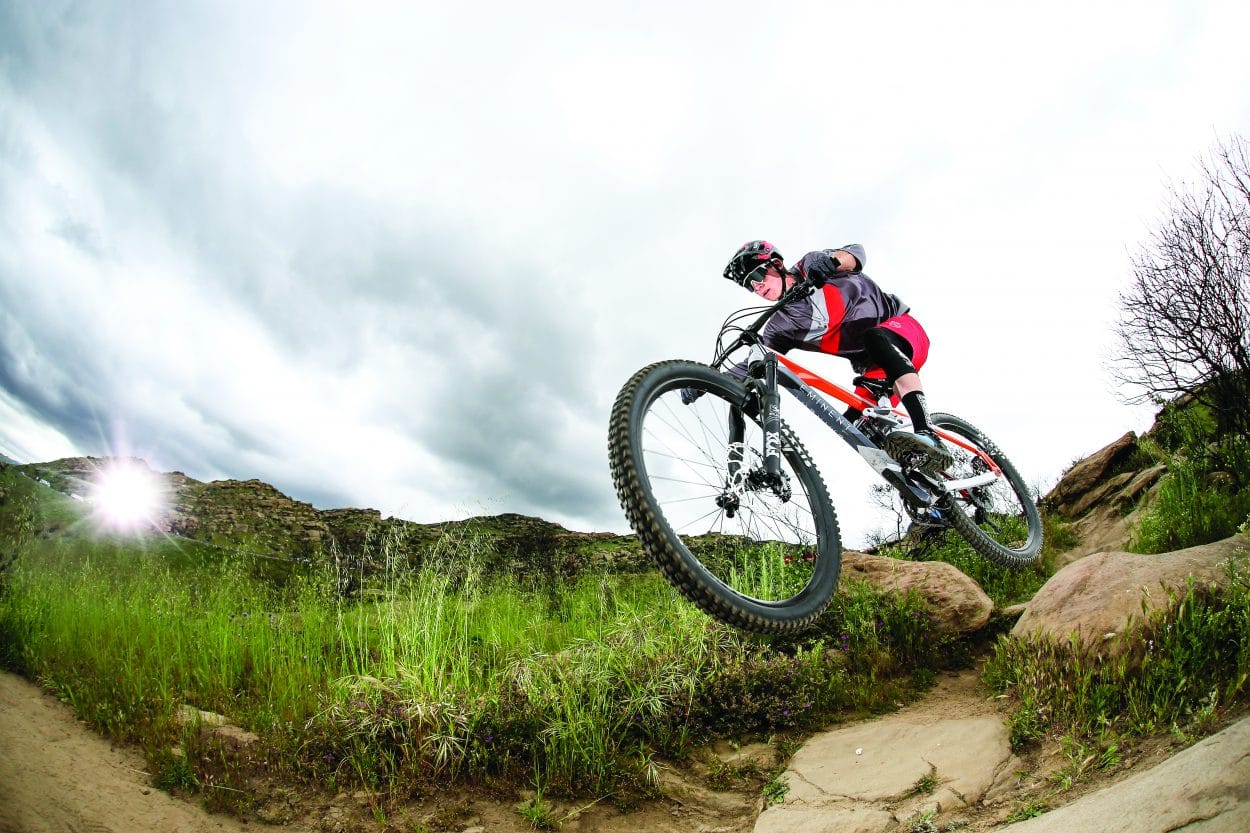 MBA: What were some of the biggest challenges once you decided to start your own bike company?

Jeff: Picking the right supplier/manufacturing partner for the frame (had difficulty on the first try and almost closed the business due to the two-year development cycle).

• Selling enough products to grow the dealer community and serve the direct customer where dealers are not located.

MBA: What was it like going to China to line up a manufacturer?

Jeff: Challenging for my first time, as just getting around was a lot more difficult as few spoke English, but not as bad as I expected. I have been inside almost every kind of manufacturing plant from my Auto experience, so walking the line and gauging quality operations was not an issue. We went to six or more manufacturers to view their operations and went with the one that we felt ranked the best.

MBA: How many prototypes did you have to make before going into production?

Jeff: We had two aluminum versions and three carbon stages, then we went straight into production.

MBA: How do you decide if a prototype is worthy of large scale production?

Jeff: We rode it for six months, didn’t break it and thought that it performed awesome in the three suspension areas—descending, pedaling and braking.

MBA: How many bikes does your factory build in a normal production run?

Jeff: We build each bike to order, similar to Santa Cruz, here in the USA, so one at a time.

MBA: How did you market your bikes in order to get the public interested in buying them?

Jeff: This is a combination of a website, social media, digital advertising, print advertising, demo events, small race team and upcoming pro rider. We definitely feel strongly about getting our bike in front of (and under) a rider to demo. Both our marketing and sales models focus on this.

MBA: Do you sell your bikes directly to consumers, or do you have bike shops selling them for you?

Jeff: We sell through our dealers, and where we don’t have dealers, we sell directly to the consumer. 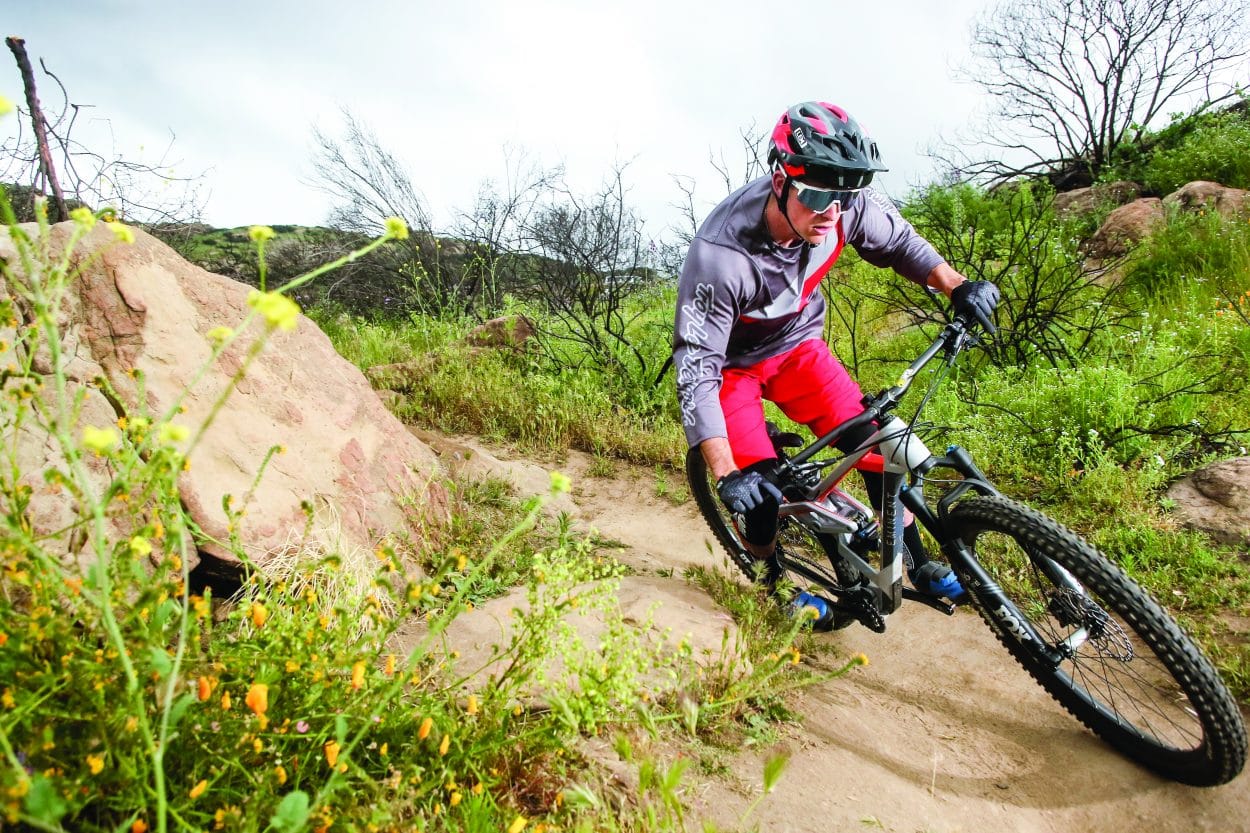 We tested the Eminent Onset in our July 2019 issue and said this, “It’s a well-rounded bruiser with the ability to tackle a wide range of trails. Want to enjoy a mellower trail with breathtaking views and lung-busting climbs? The Onset can handle that too.”

MBA: Why should somebody buy one of your bikes instead of another brand?

Jeff: Our whole brand is about providing performance-enhancing technology to get better at your sport/hobby. The AFS suspension was designed to offer performance under all riding conditions; the why is on our website: www.eminentcycles.com.

What have been the biggest challenges in starting a bike company?

• Development time for new bicycles has been too long, needs to be one year or less to react to the changing market

• Getting the word out about our bikes—people need to see them in their local trails and it is really expensive to provide carbon full-suspension bikes in all areas of the country for marketing purposes.

MBA: What are the most rewarding aspects of having your own bike company?

Jeff: When people come back from demo’s with a big smile on their face, telling us how much they love the bike and its ability to climb and go down equally as well. Also, when people write to us and say the same from just a visual look on the site. It’s awesome providing products to customers that they love— that makes it all worth it.

Mountain Bike Action Bike Hacks: Use “Your Own” Saliva to Defog…

USWE Creates The “Ride It Out Foundation”